University Looks to Students in Effort To Drive Down Waste 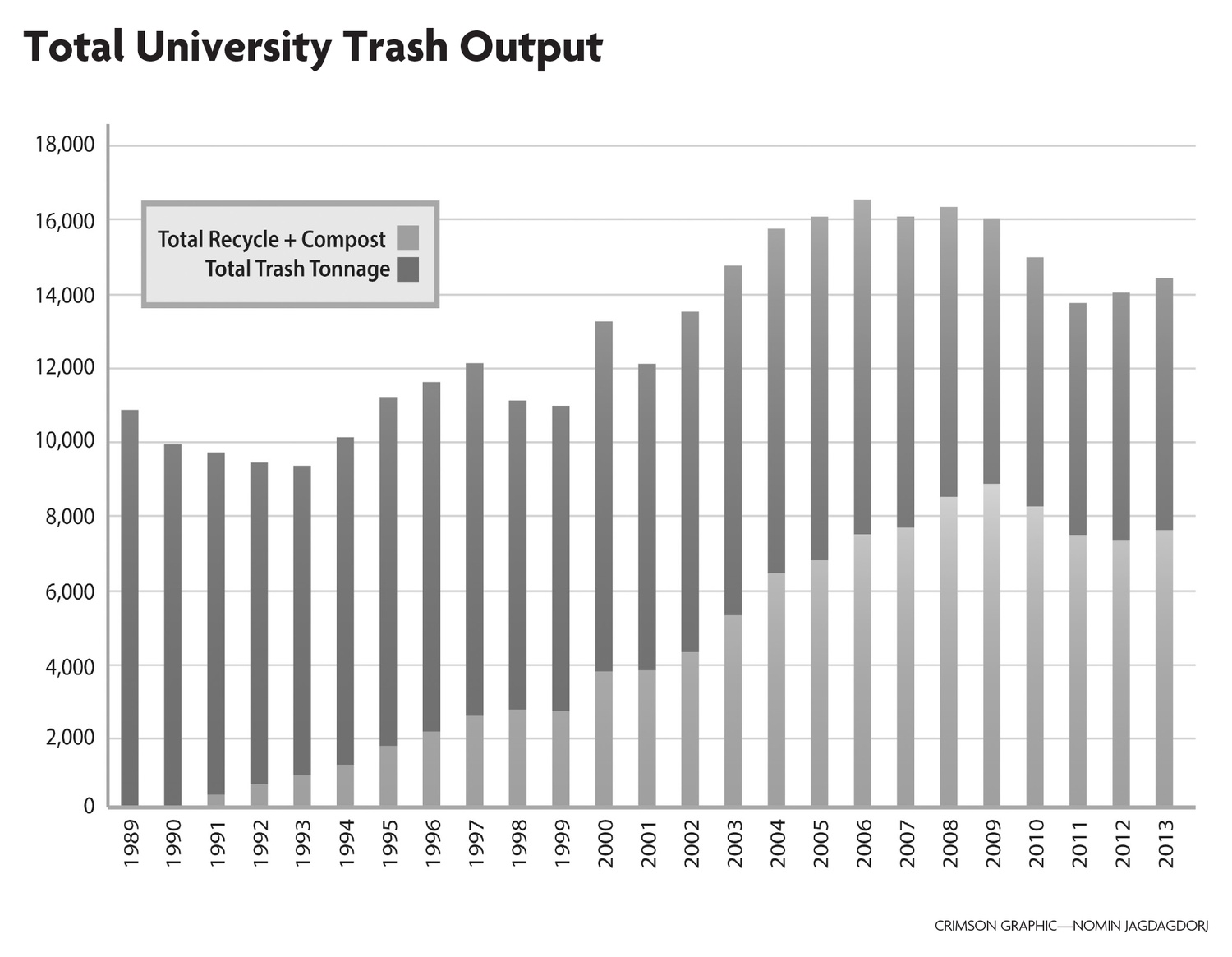 Although members of the Undergraduate Resource Efficiency Program might be completely unknown to the incoming freshmen who first see them at study breaks during Opening Days, the REPs are hard at work. Equipped with reusable plastic mugs, smoothies, and stickers, the student activists educate freshmen, playing a small part in a decades-long struggle for sustainability.

Efforts by students and staff over the past 25 years have drastically cut the amount of trash each person at Harvard outputs annually, but administrators and undergraduates alike agree that more can be done.

In 1989, the average person attending or working at Harvard outputted over 770 pounds of trash annually. Despite a population increase of over 30 percent at Harvard and large real estate expansions in intervening years, by 2013 that number was cut by more than half, with yearly trash output per capita falling to 365 pounds.

Yet, while trash tonnage has plummeted and recycling rates have bolstered, the story is not that simple. In the past five years, the average trash per capita has fluctuated in both directions, with the lowest number being posted in 2011. Harvard, it seems, has hit a efficiency barrier tough to move beyond.

With difficulties stemming from organization, implementation, and communication, those striving to push green efforts at Harvard are working to find new methods that can make the University more waste-efficient and inspire students to serve as means to this end.

WHERE DID IT ALL GO?

In the 1980s, Robert M. Gogan Jr. was completing a graduate program at the School of Education when he decided to direct his attention to addressing waste reduction and recycling at Harvard.

“I thought Harvard was doing a lousy job back in 1986,” Gogan, who now serves as the associate manager of recycling and waste management for Facilities Maintenance Operations, candidly admitted more than two decades later.

On an otherwise uneventful December day, Gogan spoke about various partnerships and policies that have contributed to reducing trash output.

“Our first goal, of course, is to reduce waste,” he said.

While single stream recycling, which Harvard switched to in 2006, made it much easier for students to recycle, according to Gogan, collaboration has also been crucial in reducing waste

He mentioned one such partnership with a company that collected items from the University for use in Haiti, Uganda, and Michigan.

In addition to negotiating zero-waste contracts with distributors, Gogan said partnering with student groups has contributed to the increase in recycling efforts.

The Harvard Habit for Humanity group, which has held a sale of used dorm items and books in the fall for almost two decades, is just one example of the numerous ways in which administrators try to work with students, he said.

Jaclyn Olsen, assistant director of the Office for Sustainability, attributed improvement in recycling to similar efforts, but said that a change in culture awareness has also played a part.

“I really think it’s been a big culture change,” Olsen said of students who have grown more environmentally conscious.

Still, both Gogan and Olsen talk about the challenges they face in reaching out to students and bringing the numbers down.

AS EASY AS THROWING IT AWAY

No city or community conducts recycling operations in the same manner, and with students from across the world arriving at Harvard every year, environmental educators have to play a catch-up game, said Samantha L. Houston ’11, REP coordinator and a former Eco REP.

The REP program was founded in 2002 after three students from the Environmental Action Committee proposed that undergraduates play a role in education and advocacy of green initiatives.

“[REPs] are basically ambassadors for all the issues,” Houston said.

With one REP per upperclassmen House, three to the freshman class, and a handful of captains, the group educates students on Harvard’s recycling and compost policies.

“You are constantly having to re-cultivate the knowledge base,” Houston said.

Kristen J. Wraith ’14, who was an Eco REP for three years and former EAC Chair, spoke about a recycling game she helped coordinate each year, where students were asked which of various items should be recycled and which should be thrown into the trash.

“One of the things that we’re always shocked about is that people tend to throw away most things,” Wraith said.

In addition to simply educating, Wraith emphasized the importance of teaching students why recycling matters.

“If there’s any effort involved, even like three feet of movement involved in recycling, some people are just going to keep on their way and trash something that might be recyclable,” echoed Houston.

As a result, Wraith said that rallying students behind a cause is not easy.

“If you are trying to change someone’s lifestyle…people are furious about that,” she said.

And even when large groups of students support an initiative, lack of communication between groups can sometimes add to the challenge.

With many groups working on specific issues tailored towards different schools, infrastructures, or environments, what works in one place does not always work in another.

“You need and want to respect each culture of the place,” sustainability communications Ddirector Colin B. Durrant said.

While the OFS oversees many green efforts beyond recycling, student groups often focus on disparate sustainability goals, such as Divest Harvard or the Beyond the Bottle Campaign.

For some, the decentralization on the student side is not necessarily a bad thing, though.

“I think [decentralization] is not a problem in any case because there are so many issues that we’re dealing [with],” said Akshay Sharma ’14, an Eco REP captain.

Wraith, on the other hand, called the current decentralization of environmental groups “a blessing and a curse.”

Wraith said that she has seen a “massive growth” of smaller student organizations centered on environmental issues in the past three years. Whereas the EAC was larger and more centralized in the past, Wraith said smaller groups “have not been working together as much.”

“If we could work harder to actually make a real strong coalition of environmental groups, overall things would be a little more cohesive,” she added.

Wraith also spoke about the struggles she has experienced over the years when it comes to implementing Green ideas. While she acknowledges that “it’s not that the University doesn’t help and work with students,” she said the process can be slow.

“It’s not really as simple as asking for something and then getting immediate action,” Wraith said.

She mentioned the work put into the Beyond the Bottle Campaign, which is seeking to eliminate the sale of plastic bottles on campus and increase the number of water fountains or filling stations. In a referendum question passed on the Undergraduate Council ballot in the Fall, students showed support for the movement.

Still, the end is not completely in sight. Because less than half of undergraduates voted in the election, UC members are not mandated to write an official stance on the matter, and they have not yet done so.

For Wraith, better collaboration between the University and students is necessary.

“We should be really building this infrastructure,” she said.

Many of those interviewed spoke about the importance of educating and empowering students to reduce trash, especially food waste going forward.

Although Harvard has been recovering refuse for composting since 1991 and has increased its efforts in landscaping and food composting recently, according to an OFS document, Gogan said that much unconsumed food still is left in the trash.

“To me that’s the greatest sin—to take a product that could have nourished human consciousness, the most valuable resource in the world that we know of, and just send it to a landfill where its just going to burp methane and accentuate problems caused by global warming,” Gogan said.

In order to increase environmental awareness, many emphasize the importance of reaching out to students and exciting them about the topic. Already, the OFS uses competitions and sustainability grants, which allow students to pitch ideas and receive funding to implement them, among other means to build a better relationship with students.

Still, Houston said there could be more effective ways to educate and excite people.

Although Wraith noted the OFS and Eco REPs are doing a good job, she mentioned that those pushing for Green efforts “need to be a little bit radical” if they want to change how some students think.

Even during her time as an Eco REP, she said that she found “things that were not working, but [because] that was the policy…you did them anyway.”

Wraith suggested that a recycling awareness imitative should be implemented in the same way that undergraduates are required to complete Harvard Proof, an online alcohol safety program, before they arrive on campus.

For now though, on the student level, Olsen and Gogan said they want to continue partnering with various student groups to spread the message across the University ever more effectively.