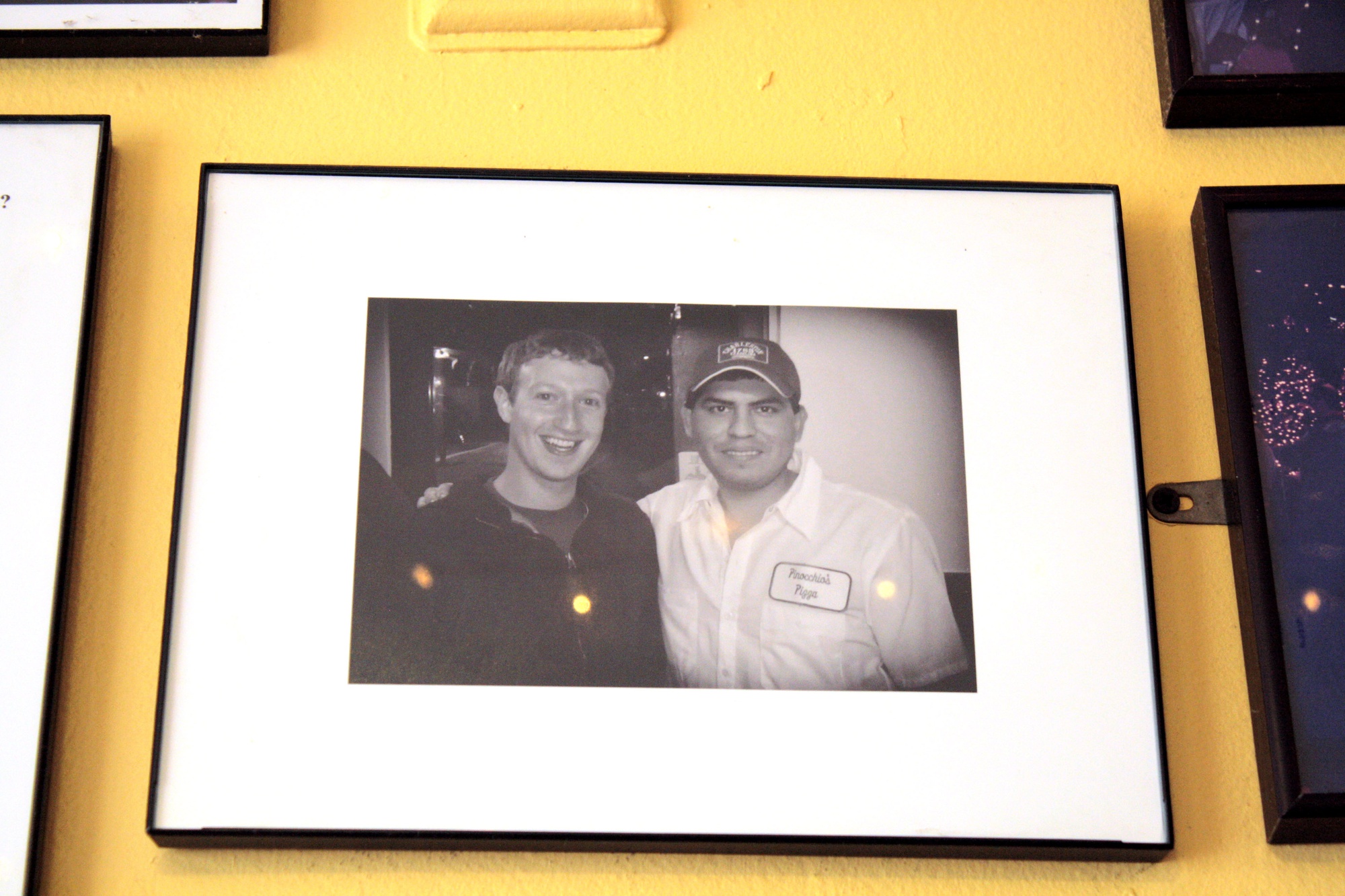 The Enigma of Pinocchio’s Photos

A mishmash of photographs cover all of the walls save one, which instead features a seemingly arbitrary mural of a whale and a mermaid consuming pizza. Some photos are black and white, and some are in color. Some have one person and some have many; some have none at all. I am sure of one thing, though: they all must mean something.
By Ali M. Monfre

Pinocchio’s Pizza & Subs is a classic Harvard Square staple. When customers enter—whether they are visiting families at two in the afternoon or intoxicated students at two in the morning—their senses are immediately overwhelmed by bright colors and the enticing aroma of pizza baking in the oven. Most visitors don’t really notice what’s on the walls until after they’ve had the chance to order, but once they do, they can’t help but be intrigued. 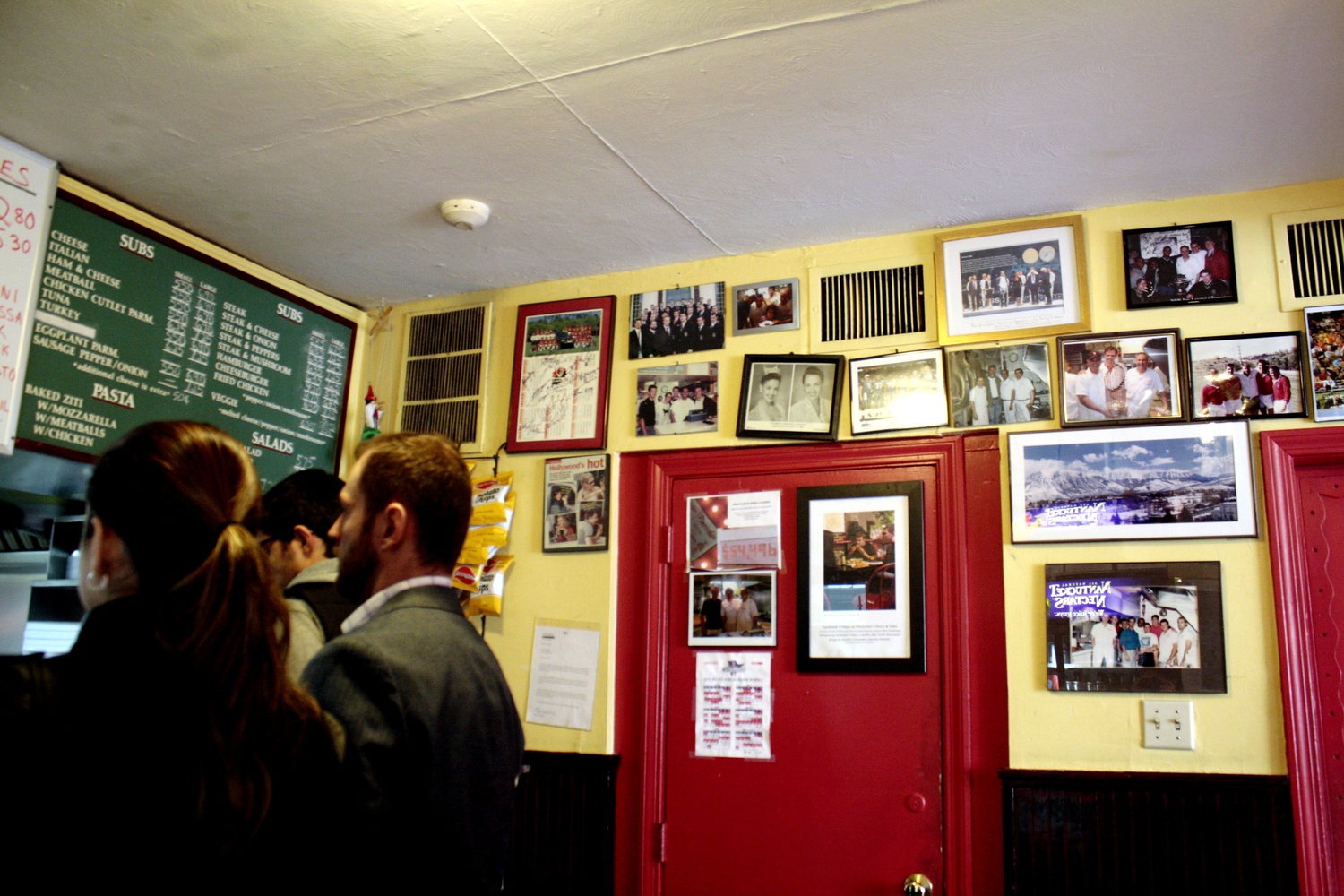 A mishmash of photographs cover all of the walls save one, which instead features a seemingly arbitrary mural of a whale and a mermaid consuming pizza. Some photos are black and white, and some are in color. Some have one person and some have many; some have none at all. I am sure of one thing, though: they all must mean something.

The first to catch my eye is a photograph of a young Mark Zuckerberg eagerly digging into his slice of Noch’s pizza. A caption below details something called “Facebook Fridays,” which appear to be tech talks held every Friday afternoon, during which students get together in the spirit of upholding Mark Zuckerberg’s legacy and presence at Pinocchio’s to discuss current events in the world of computers. Now this is something exciting. Who started it? I wonder. What time is it held? Can I come? I catch one of the employees eyeing me as I read the poster, and I turn to ask him a few of my overflowing questions. Before I can get out any words, however, the gray-haired, jovial man looks at me with kindness and something close to pity in his eyes and regretfully tells me, “It doesn’t exist anymore.”

Oh. Well can he tell me anything about it? It was started by a student about five years ago now, went on for a few months, and then died out; he doesn’t know anything else. Not to be discouraged, I move on to my next query: one of the black and white photos, depicting a group of ten or so men standing outside Noch’s. Could this be the photo from when it was founded over 30 years ago? 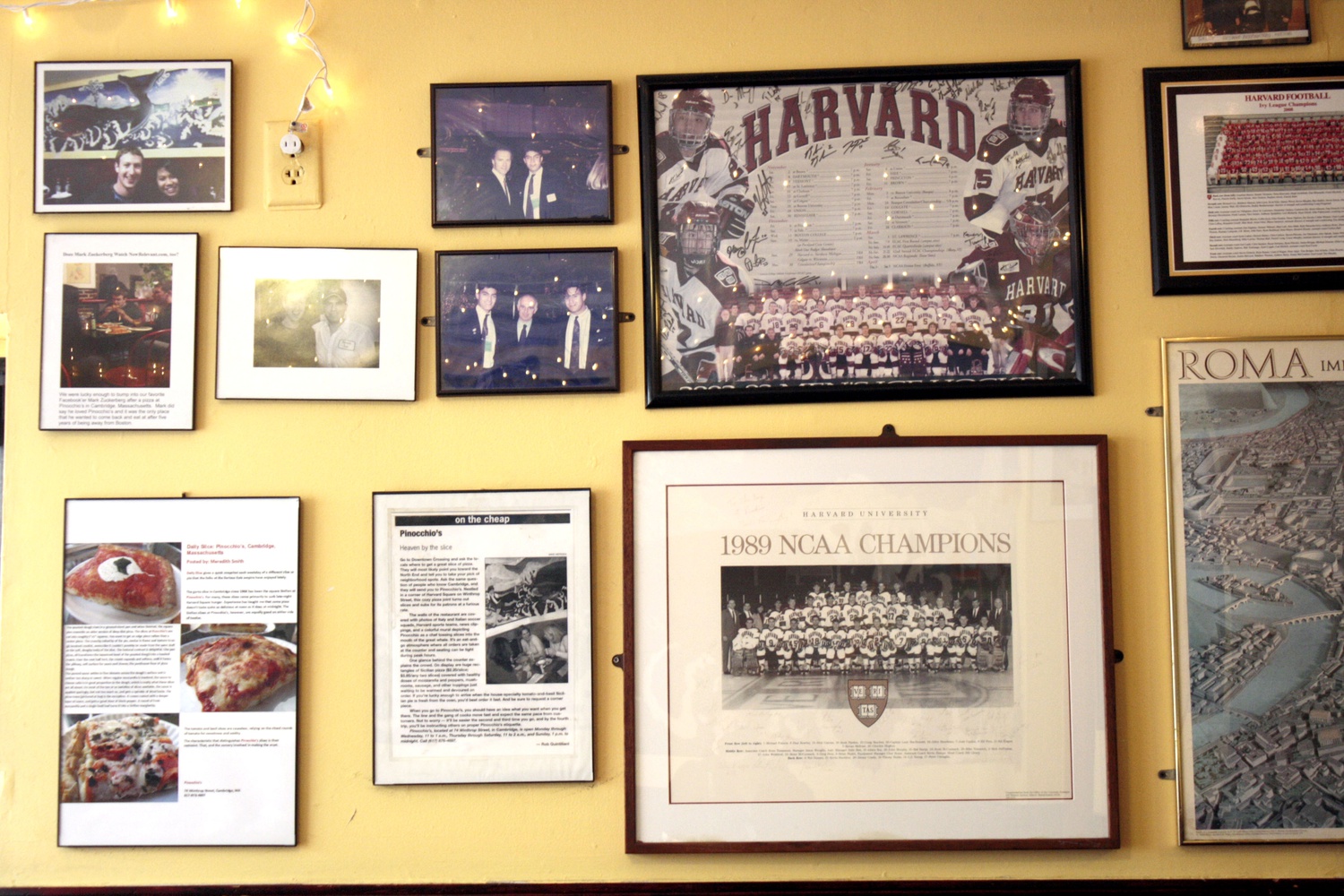 He doesn’t know. And none of the other employees do either. Ok, can any of them tell me anything about any of the photos on the walls? Nope. Still convinced there is a story to be had, I ask if anyone else affiliated with the restaurant would know any interesting stories, and am told to come back tomorrow to talk to someone named Jerry. Ralph, the very genial employee that I have been talking to, wishes me good luck and a great rest of my day as I walk out the door.

The next day I return, full of hope and sure that I will leave the restaurant with my head chock-full of crazy stories. I enter, walk right up to the spotless counter, and ask to speak to Jerry. At first, all I get is a host of confused and skeptical looks from no less than three members of the staff, who are no doubt convinced I have either come to register a complaint or am simply crazy. Is there a Jerry who works here? No? Are you sure? Somehow I manage to get across that I am not there with hostile intent, and Jerry comes out of the back to talk to me.

Unfortunately, he also claims to know literally nothing about the photographs. Not quite sure I believe him, I push a little harder and ask if he has been around for any of them. He flashes me a friendly smile and replies sure, he’s been around for 21 years. He remembers taking the photo of our good friend Mark I had asked about the day before, and recalls taking one with a Patriots football player he points out to me. So you just take photos with famous people when they come in? Yes, apparently. What about the ones on the wall with no famous people? The ones of just the staff or of local sports teams? No clue, he tells me. Most of the photos on the wall were there when he started 21 years ago.

Disappointed but not wholly unsatisfied, I take advantage of his affable demeanor to take one last stab at a fun story before I leave: does he know anyone else who might know anything more about the photographs? He suggests I talk to Ralph.