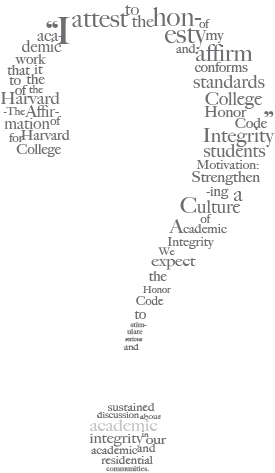 This is the part II of a two-part series on Harvard's proposed student honor code. Part I ran on April 30.

Supporters of the proposal for the College’s first-ever honor code have not been shy about their ambitions for the policy.

Members of the Academic Integrity Committee—the group of faculty members, students, and administrators who developed the proposal—have repeatedly said that they hope that the honor code, if adopted, will change Harvard’s academic culture. Much of the conversation about the honor code has centered on campus attitudes toward academic integrity. The motivation for the policy, as described in a mid-January draft, is “strengthening a culture of academic integrity” at the College.

Supporters of the proposal emphasize that inspiring student and faculty “buy-in” to the policy is necessary to create this shift in culture. They suggest that adding student voice to the disciplinary process and prompting more conversation about academic integrity issues will be key to gaining student support.

With the Faculty Council’s approval on Wednesday and a vote expected among the broader Faculty of Arts and Sciences next week, it seems more likely than ever that the proposal—one that would establish a student-faculty judicial board to hear cases of academic dishonesty and a requirement for students to sign a statement affirming their commitment to the code—will become policy.

But even if the proposal passes, the honor code will face challenges beyond faculty members critical of its contents. In their ambitious effort to change the culture of a 377-year-old institution, those charged with implementing the honor code may also encounter hurdles created by a restructured disciplinary system and a community that may be apathetic to the policy’s purpose.

If the Faculty approves the proposal next week, College administrators and others will be tasked with implementing the honor code, and with that will come its own challenges, some of them purely logistical.

Dean of Undergraduate Education Jay M. Harris, who chairs the Academic Integrity Committee, has previously said that he expects the honor code to be implemented by the fall of 2015, leaving College administrators just over a year to put into place the mechanisms and infrastructure necessary for its operation.

That implementation process will come in tandem with a period of transition for the College and its disciplinary system. The Administrative Board, which would still hear academic dishonesty cases next academic year even if the policy is approved, will experience a change in leadership as incoming Dean of the College Rakesh Khurana chairs the body for the first time. The board will also have to adjust to the departures of longtime secretary John “Jay” L. Ellison and Adams House Resident Dean Sharon L. Howell this summer.

As the administration fills existing positions within its disciplinary system, if the honor code proposal becomes policy, the College will also be tasked with filling newly-created roles with students, administrators, and faculty. College leaders will be navigating a new disciplinary system that will involve students in the process of adjudicating cases of alleged academic dishonesty for the first time.

Although a mid-January draft of the honor code offers only limited information on plans for the student-faculty board it proposes, the draft stipulates that the body’s membership be composed of half students and half faculty and administrators.

Michael C. Ranen, the resident dean for Ivy Yard and a member of the Academic Integrity Committee, called selecting students for the board and training them properly a “major challenge.” Ranen said that making the student members “understand that they’re not just token members” of the honor board will be necessary for it to be successful.

Peter F. Lake '81, a professor at Stetson University College of Law who specializes in higher education law, said that student members of judicial boards need to be trained extensively, something that could present a challenge during implementation.

“One of the big problems is just trying to manage the training and consistency issues,” Lake said, adding that student members could bring with them possible conflicts of interest and bias and risk being retaliated against after convicting a peer. Former Dean of the College Harry R. Lewis ’68 added that he worries that student members of the board would be “harsher” than administrators.

Even after student members of the board are trained, the honor code’s adoption might spur another logistical challenge, according to outside experts, in the form of an increased academic dishonesty caseload.

Gary Pavela, a former director of academic integrity at Syracuse University who has consulted other colleges on integrity issues, said that Harvard should have the administrative infrastructure in place to handle a “sharp increase” in the number of reported academic integrity infractions after the honor code becomes policy. When he worked at the University of Maryland during the adoption of its honor code, Pavela said the number of reported cases increased as faculty reported at a higher rate.

Similarly, Ellison said that he expects the College to see a spike in reported infractions after the honor code’s adoption because the policy will increase faculty focus on integrity issues. Harris wrote in an email that it “seems hazardous to offer any guess” as to the possibility of an increase.

Implementers of the proposed honor code may face a broader obstacle than facilitating a change in the College’s disciplinary system. Not only will they have to convince some apathetic faculty members and students that an honor code is necessary for the community, but also that their enthusiasm is essential to the policy’s success.

Supporters of the honor code have emphasized that community buy-in will be key to successfully creating a culture shift at the College and increasing student and faculty focus on the integrity issues emphasized in the policy. Those involved in shaping the honor code have suggested that starting more formalized conversations about academic integrity throughout undergraduates’ four years at Harvard would help spur that support among students.

Terah E. Lyons ’14, a student member of the Academic Integrity Committee who was one of several members to draft the proposal, said that faculty members and others who have criticisms of the policy “certainly have legitimacy in voicing it.” Still, she added, “in implementing something like this, optimism really is the key to success.”

If initial reaction to the proposed honor code is any indication, the Academic Integrity Committee may find itself hard-pressed to inculcate a high level of enthusiasm around the honor code.

Undergraduate attendance at the four feedback sessions on a draft of the honor code held at the beginning of the semester was low. The largest of the four meetings, held in Kirkland House, drew less attendance from students than the number of individuals who sit on the Academic Integrity Committee, while only two students not involved in the committee attended a session held in Cabot House.

Undergraduate Council President Gus A. Mayopoulos ’15, who attended a high school with an honor code, said a minority of students are “very passionate” about the honor code proposal, either for or against it.

“I think the majority of students don’t really care about it,” Mayopoulos said. “I think even when the honor code is enacted, which I hope it will be, I think still the majority of students won’t care about it.” He maintained that students’ indifference is for the best because it indicates that most are not cheating and therefore are less affected by the regulations.

Students are not the only members of the community apathetic towards the possibility of the College’s first honor code, as faculty discussion of the proposal has been limited in both public and private conversations. At multiple faculty meetings this semester when the proposal was under discussion, Harris fielded only a handful of questions on the code.

According to government professor Harvey C. Mansfield ’53, although faculty care deeply about academic integrity, the specific proposal is “nothing to write home about.”

“It’s a response to an emergency, or what the administration saw as an emergency,” said Mansfield, referring to the Government 1310 cheating scandal, Harvard’s largest in recent memory. “I think that’s generally understood and generally appreciated, but not enthused over. We had to do something and this is what we’ve done.”

While Harris has denied that the Academic Integrity Committee’s work was a response to any one case, the cheating scandal accelerated the group’s efforts.

Lyons, for her part, said that she thinks there is a “large contingent” of faculty members enthusiastic about the honor code, among them members of the Academic Integrity Committee who helped create it.

“I think once people come to understand it in a deeper sense, people will sort of adopt that enthusiasm,” Lyons said.

Still, Lewis said he thinks that some faculty members are not engaged because the proposal, as it stands, has limited effect on how professors teach their classes.

“I’m not terribly surprised it hasn’t caused a lot of conversation in the faculty. And it’s not because Harvard’s faculty doesn’t care about undergraduate affairs; they do when it really impacts the way students engage with education and research,” said Lewis, also a computer science professor. “It’s just not clear that this does that in the same way.”