Honor Proposal Would Catch Harvard Up, Incrementally, With the Times 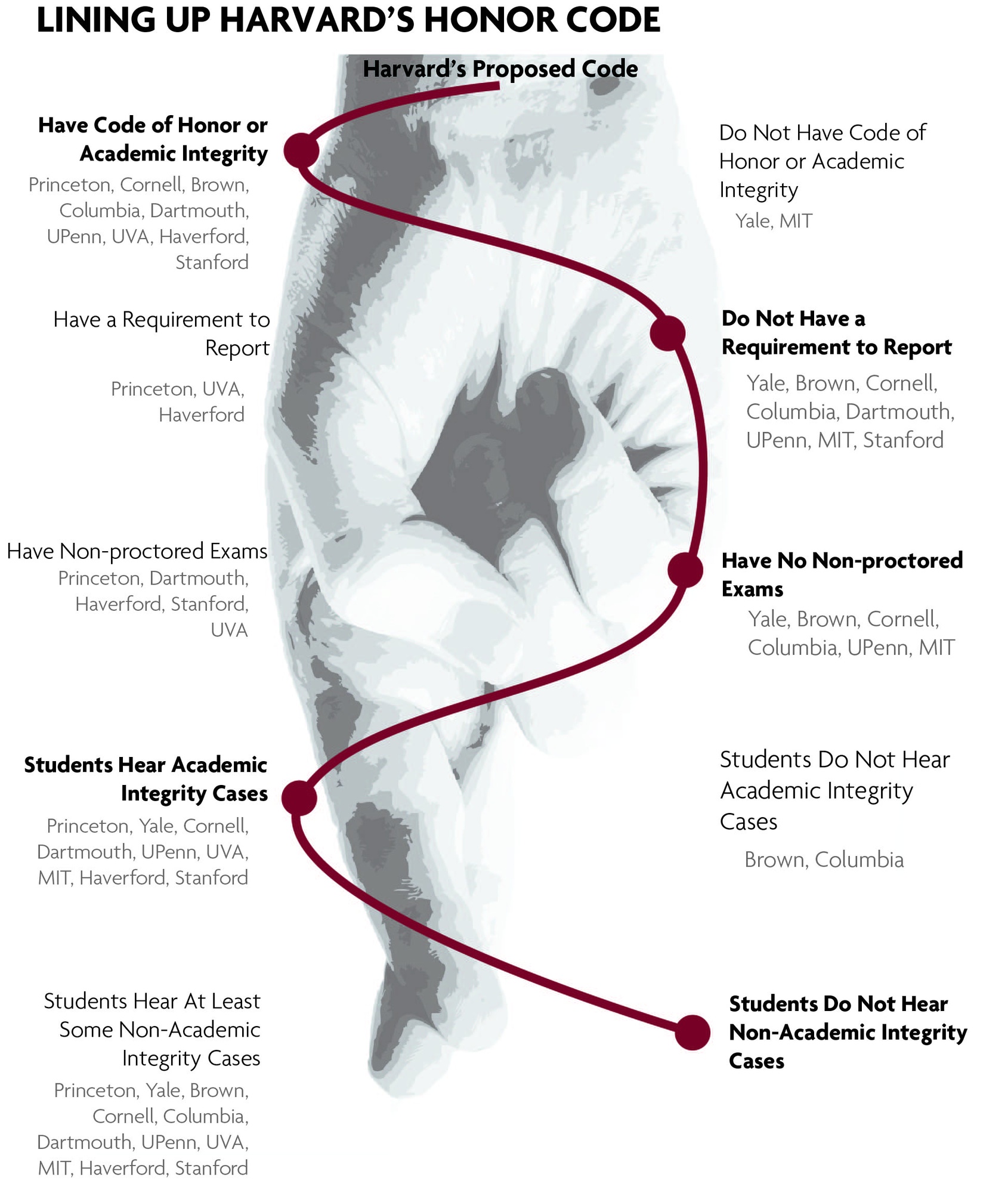 This is part I of a two-part series on Harvard's proposed student honor code. 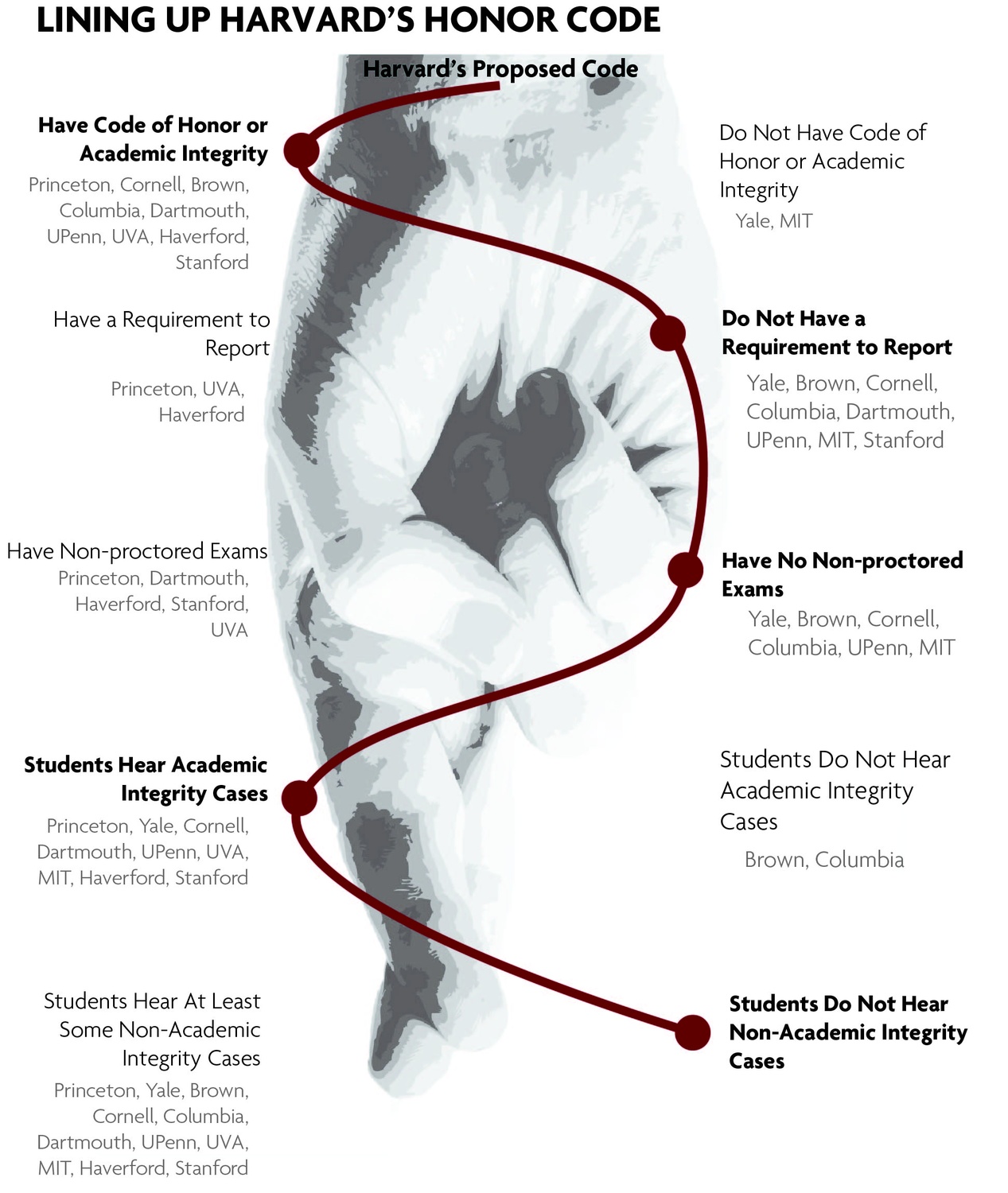 Longtime critics of the College and its disciplinary system raised their voices anew, questioning Harvard’s academic culture and its allegedly antiquated Administrative Board. A number of these detractors, both within the University and outside of it, called for Harvard to align itself with some peer institutions and their more formalized policies governing academic integrity.

Next Tuesday, over a year and a half after the cheating scandal spilled into the news, Faculty members are expected to vote on just that—a proposal to institute an honor code that would formally emphasize the College’s commitment to academic integrity. The code’s supporters point to peer schools’ existing systems as evidence that such a policy could work to cultivate a stronger culture of academic integrity at Harvard.

Yet, even as the honor code proposal and its call to involve student voice in the disciplinary process may represent a significant policy shift at the College, experts say that these proposed changes come much later, and perhaps go less far, than their age-old counterparts at peer institutions.

Still, while some members of the committee that drafted the proposal acknowledge its limited scope, they maintain that changes to Harvard’s disciplinary process must be incremental to be effective.

The Ad Board’s 1890 establishment makes it older than the House system, Widener Library, and Harvard Business School. The College’s primary disciplinary body has long been criticized, with detractors claiming that the board and its policies are outmoded.

The Ad Board is “almost a bit of an anachronism nationally,” said Gary Pavela, a former director of academic integrity at Syracuse University who has consulted other colleges on integrity issues.

After decades of only occasional changes in policy, the College’s proposal for an honor code, if approved, would eliminate most, if not all, academic dishonesty cases from the Ad Board’s jurisdiction with the creation of a student-faculty judicial board to hear alleged honor code violations. That “honor board” would bring student voice into the College’s disciplinary process for the first time.

Although such a change would be unprecedented for the College, Harvard’s proposal to engage students in its disciplinary process comes years behind many of its peers. Undergraduates sit on judicial boards or are involved in disciplinary proceedings in some form at every Ivy League school other than Harvard, and some such systems have been around for decades.

“By discussing a move from the system that’s currently in place to an honor code, it’s as if Harvard’s moved from the 1800s into the 1960s and 1980s, and so I suppose it’s a big step forward in terms of getting closer to modernity with the way one handles discipline cases,” said Peter F. Lake '81, a professor at Stetson University College of Law who specializes in higher education law.

The 1970s, ’80s, and ’90s saw an increase in student involvement in college disciplinary processes across the country, according to Matthew Gregory, president of the Association for Student Conduct Administration and associate dean of students at Louisiana State University. He said that during that time period, it became increasingly common to see panels entirely composed of students.

Gregory attributed this increase in student engagement to the emergence of research by academics such as Alexander W. Astin that found that involving students in the disciplinary process could improve student retention rates and increase students’ satisfaction with their schools, among other benefits.

Not only would Harvard be late among its peers in providing student representatives on disciplinary bodies—the College is also late in instituting an honor code. Aside from Harvard and Yale, all Ivy institutions have adopted a formal code of honor or academic integrity. Princeton established its honor system just three years after Harvard created the Ad Board; Dartmouth and Cornell created their policies in 1962 and 1976, respectively.

More recently, a push by the Columbia College Student Council resulted in the implementation of an honor code this academic year, when members of the Class of 2017 were encouraged to collectively recite and sign a version of the code at a fall assembly, according to Nora Habboosh, an undergraduate and the academic affairs representative for the council.

In public and private conversations about Harvard’s current proposal for an honor code, members of the Academic Integrity Committee have consistently pointed to peer institutions’ policies as justification for adopting a similar system at Harvard. They point to research to evidence the success of honor codes elsewhere.

Yet Harvard’s proposed policy, if approved, would have limited reach compared to those established by some of its peers. The Academic Integrity Committee’s proposal for a modified honor code purposefully does not require students to report peers who violate the policy, and maintains that examinations be proctored.

Harvard is not alone in this respect. Of schools in the Ivy League with honor codes or similar policies governing academic integrity, only Dartmouth and Princeton hold non-proctored exams, and only Princeton requires students to report their peers for cheating. Pavela, for his part, suggested that the requirement to report—characteristic of a traditional honor code—“doesn’t work.”

Schools such as the University of Virginia and the College of William and Mary have honor codes that establish student-only disciplinary bodies that administer cases of cheating, as well as cases of lying and stealing. Other schools, such as Haverford College, go even further, with honor codes and honor boards regulating most actions, including some peer dispute cases.

Even at institutions without honor codes, students play a larger role in the disciplinary process than they would under Harvard’s proposal. Undergraduates at Yale and MIT—neither of which have honor codes—hear all student misconduct cases, including peer disputes such as sexual assault cases.

Undergraduate Council President Gus A. Mayopoulos ’15, who attended a high school with an honor code, suggested that involving student representatives on the Ad Board may make sense, and that including more student voice in such processes is usually better.

Lake suggested that Harvard “could do a lot more” to involve student voice in the disciplinary process—even beyond putting undergraduates on judicial boards that address misconduct beyond cheating. Lake suggested that colleges should involve students “in regular and periodic climate and assessment check[s]” and self-study their discipline systems at least annually with “meaningful student input.”

“[Harvard] may be missing an opportunity to use students more broadly in the management of the environment,” Lake said.

OPTING FOR A SMALLER CHANGE

Though several members of the Academic Integrity Committee acknowledged that the proposed honor code and student-faculty board has a smaller jurisdiction than it could, they suggest that this represents the appropriate level of reform for the time being.

Terah E. Lyons ’14, a student member of the committee and one of several to draft the language of the proposal, said that the committee has generally discussed creating a board that would hear more than academic integrity cases but decided against it. “I think it’s going to take some time to get to that point, if we ever do,” Lyons said.

She said the Academic Integrity Committee decided to restrict the honor board’s jurisdiction to academic integrity infractions primarily because involving student voice in that adjudication process is already a “huge change” for Harvard, considering how long the Ad Board has been an institution. Changes to the process will have to happen “incrementally” for them to work, she said.

Dean of Undergraduate Education Jay M. Harris, who chairs the Academic Integrity Committee, wrote in an email that he agreed with the sentiment that such changes must be incremental to be effective, adding that stealing and lying—at least to a University officer—is already “strictly forbidden” in the Harvard College Handbook for Students. “We are simply not choosing to change the way we engage with those matters at this time,” Harris wrote.

Lyons added that sensitivity is an issue when considering the process for hearing sexual assault cases.

“I understand there are restraints,” Mayopoulos said, “but having an honor code and an honor board that deals with more than just academics would be preferable.”

Michael C. Ranen, the freshman resident dean for Ivy Yard who sits on the Academic Integrity Committee, recognized that the committee’s proposal lacks the requirement to report of some of its peers, but suggested that the proposal was written with the goal of gaining the support of the entire community. He added that the honor code is a “living document.”

“I think this honor code should be and will be reviewed, and I think in a few years tweaks may be made,” Ranen said.