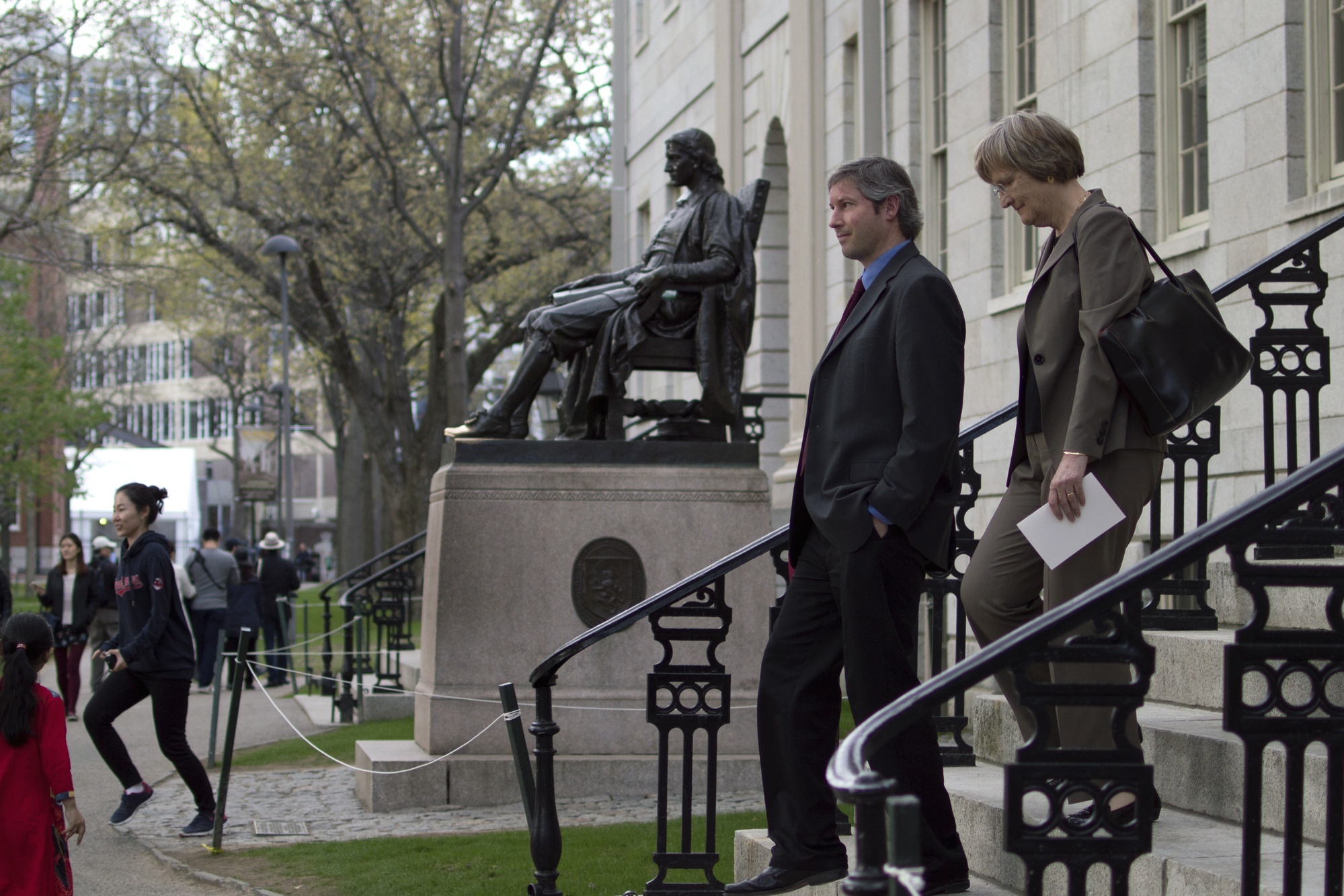 Harvard President Drew G. Faust leaves University Hall in May 2014 after the last regular meeting Faculty of Arts and Sciences meeting of the year, during which the body approved the College's first-ever honor code.
By Dev A. Patel and Steven R. Watros, Crimson Staff Writers

After four years of research and drafting by the Academic Integrity Committee, members of Harvard’s Faculty of Arts and Sciences approved the College’s first-ever honor code at their final regular monthly meeting of the year on Tuesday, laying out formal expectations for academic integrity and creating a new student-faculty/administrator judicial board to hear cases regarding the violation of those expectations.

Likely beginning in the fall of 2015, all College students will be required to make a regular affirmation of integrity, the nature and frequency of which will be determined next year, according to Dean of Undergraduate Education Jay M. Harris. Incoming Dean of the College Rakesh Khurana will recommend specific logistics concerning this affirmation to the Faculty Council, and subsequently the full Faculty will vote on the final details.

“This is a big step,” FAS Dean Michael D. Smith said after the meeting, though he noted that there is “a lot more work to be done.” 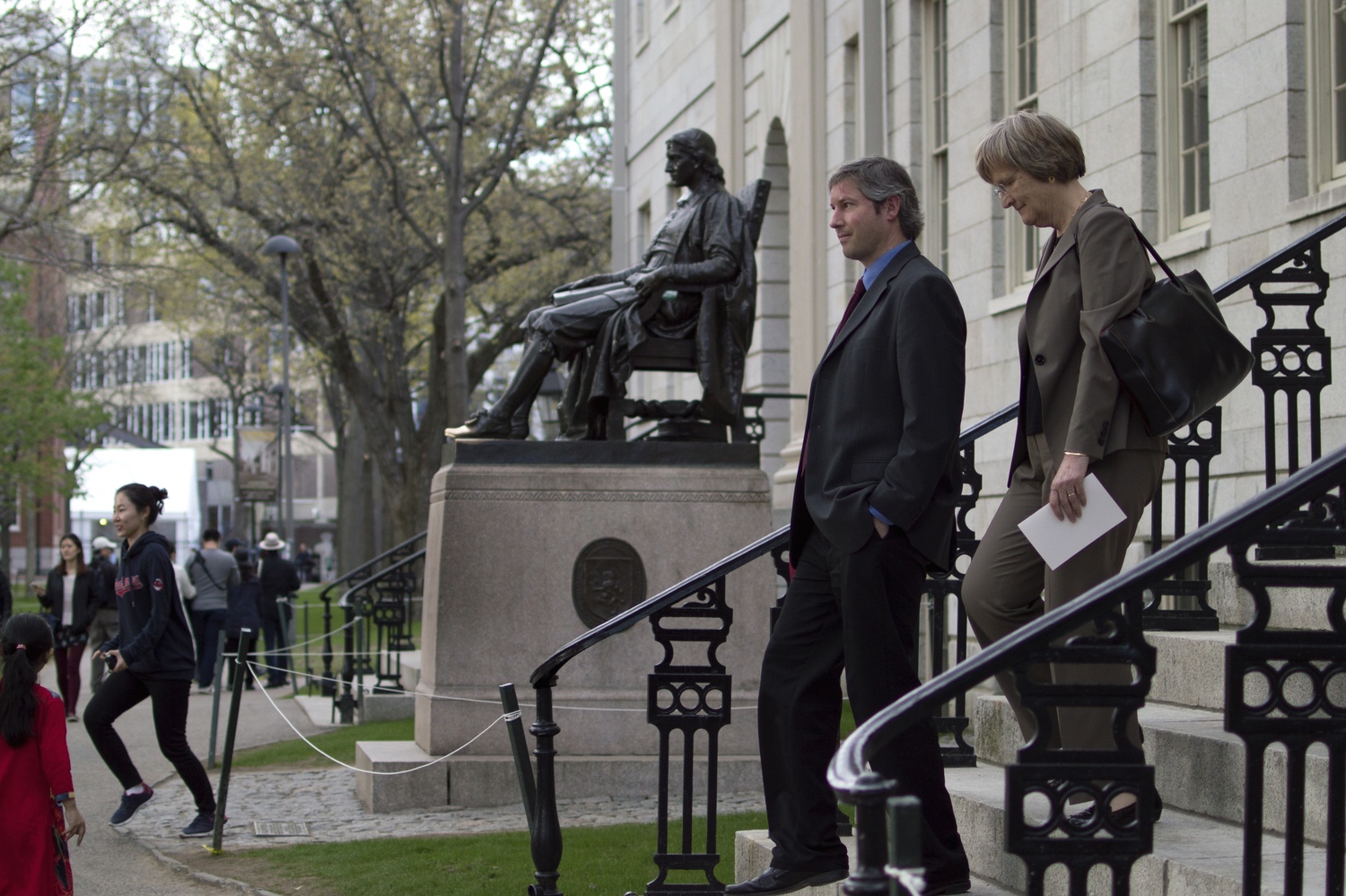 Harvard President Drew G. Faust leaves University Hall in May 2014 after the last regular meeting Faculty of Arts and Sciences meeting of the year, during which the body approved the College's first-ever honor code. By Y. Kit Wu

Undergraduate Council Vice President Sietse K. Goffard ’15, who served on the Academic Integrity Committee for two years and voiced his support for the honor code at the meeting on Tuesday, said the vote marks an important step in a longer process.

“The impact will probably be small, but I think over time it will help to create that culture shift where people really value academic integrity and personal integrity,” he said.

The Committee on Academic Integrity will continue to meet in the coming academic year to discuss the implementation of the honor code.

“Our hope is that in the coming years that the code catalyzes hundreds of conversations and reminds us of what it means to be part of the Harvard College community,” incoming Dean of the College Rakesh Khurana wrote in an email Tuesday.

With this significant policy shift, Harvard joins a long list of peer institutions who already have similar systems regarding academic integrity. Yale now remains the only school in the Ivy League without an honor code.

The honor code, the first in Harvard’s 377-year history, also includes the creation of the Harvard College Honor Board. Unlike the Administrative Board, the body that currently hears such cases, the new honor board will include student members, in addition to resident deans, other faculty, administrators, and graduate students who have served as teaching fellows. The Dean of the College, or the dean’s designee, will serve as chair of the board, according to the approved proposal.

Tuesday’s meeting marks the fourth time members of the Faculty have gathered to discuss the honor code over the past two years, following several discussions during which professors expressed concern over the potential impact of the policy and its ability to change the campus culture toward cheating. Members of the Faculty Council voted 13 in favor and two opposed to the new honor code at their April 30 meeting.

Although faculty members spoke and voted overwhelmingly in favor of the new policy, which was presented by Harris, who chairs the Academic Integrity Committee, some professors who spoke during the meeting said that they are unconvinced that the affirmation of integrity is an effective means for curtailing the problem of cheating at Harvard.

"I haven’t heard the evidence that the device that is proposed here gets at the problems at hand," said Computer Science professor Harry R. Lewis ’68, former Dean of the College.

Despite these concerns, Harris said that research into honor codes shows that they are effective in lowering rates of cheating at schools that implement them.

“It is critical that we move in [accordance] with the research,” he said.

For the second time this semester at a Faculty meeting, Lewis asked Harris whether or not the affirmation of integrity would be mandatory or voluntary and, if it were mandatory, what “sanctions” students would face for refusing to make the affirmation.

Although Harris said at February's meeting that the affirmation would be required, he did not explain how students might be reprimanded if they chose not to make the affirmation at either April’s or Tuesday’s meeting.

The honor code will not include a requirement that students report instances of cheating that they observe. In addition, under the new policy, exams will continue to be proctored.

College students, while unsure about the implications of the Honor Code, expressed their support for the approved legislation Tuesday evening.

“I don’t know much about it, but I think an honor code is a good idea to have a set of guidelines,” Alex B. Miller ’15 said. “It’s good to understand an institution’s moral compass.”

Miller added that the student voice on the Honor Board seems to be a positive change. “I think it’s a good idea to share the students’ perspective and not have discussions be one-sided,” he said.

Stephanie Fuller ’16 said that the effects of the policy are not yet clear. “For the people who are determined to get the grade no matter what, it might not stop them,” she said. “I think it might be helpful for students in moments of weakness.”

For Caitlin M. Watson ’14, the new policy is a worthwhile step. “I know it’s worked at other Ivy League schools, so it’s definitely worth a try here,” she said.

The new policy is the product of four years of work by the Academic Integrity Committee, which was first convened in 2010, but accelerated its efforts to draft an honor code on the heels of the Government 1310 cheating scandal in the fall of 2012.

The committee originally presented its first honor code draft to the Faculty last April. That draft outlined a five-point proposal, which included a number of stipulations that are not included in the finalized version of the honor code policy approved on Tuesday.

In its first version, the honor code included a “declaration of integrity” to be written on all assignments, projects, and final exams. In addition, the Committee suggested that students may be asked to make a similar affirmation upon matriculation to the College.

Although the student role in Harvard College Honor Board marks a significant change in the school’s policy, a Student-Faculty Judicial Board currently exists to hear cases that fall outside of the domain of the Faculty. This body, however, has heard just one case since its inception in 1987, according to the Ad Board’s website.

German professor Peter J. Burgard highlighted two grammatical issues and a punctuation error within the proposed language, all of which were accepted by Harris as a friendly amendment and adopted along with the rest of the policy.

The Faculty also approved a switch to a course credit system instead of the half-course protocol currently used and a revision to the student handbook allowing rising sophomores, juniors, and seniors to submit requests for mixed-gender housing groups to their House administrators.

—Staff writers Meg P. Bernhard and Noah J. Delwiche contributed to the reporting of this story.

An earlier version of this article incorrectly stated the month of the faculty meeting in which Harris said that the affirmation of integrity would be required of all students. In fact, it was February.