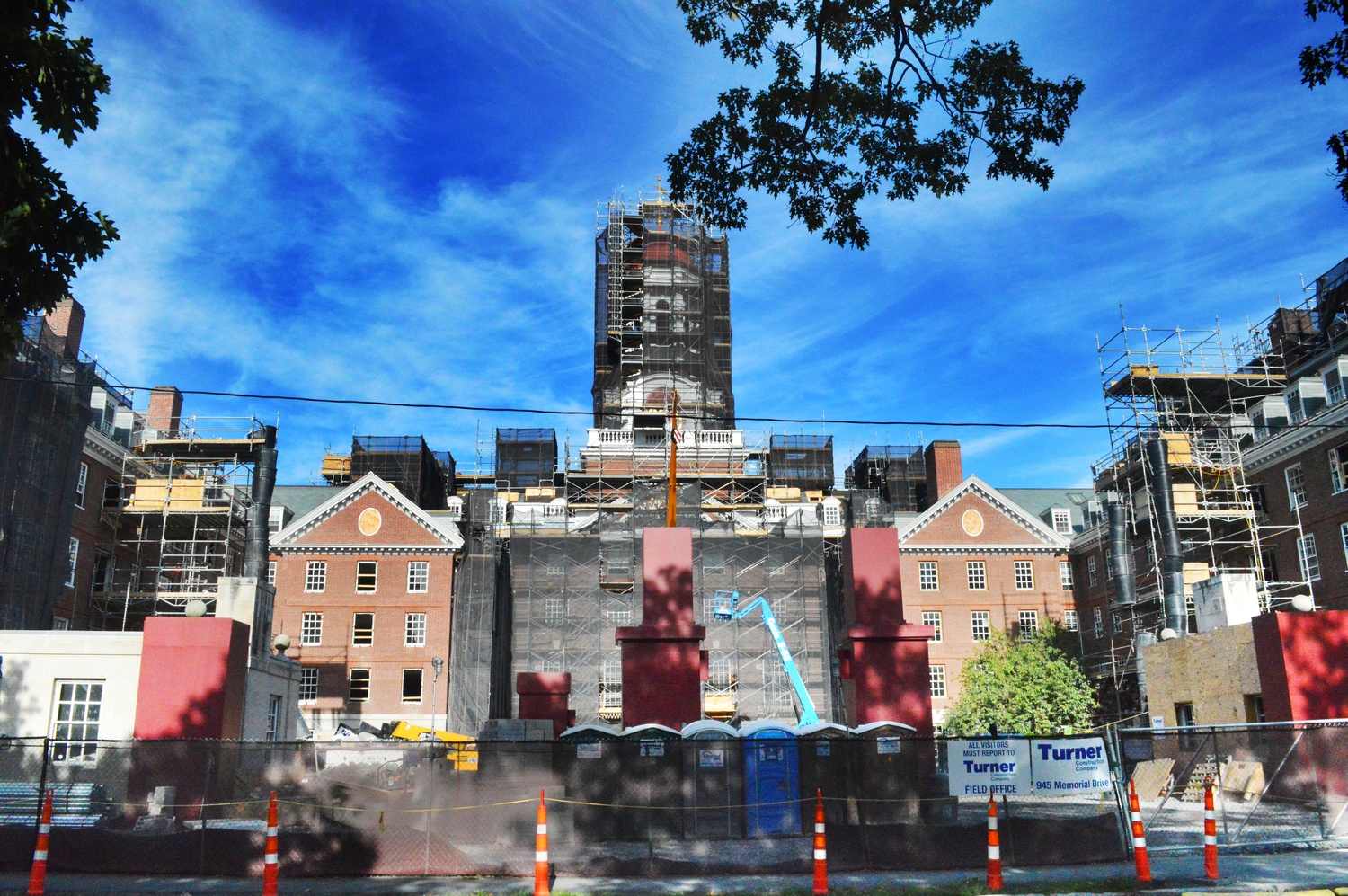 Dunster House has been under construction since June 2014 and is slated to reopen in September 2015. By Zorigoo Tugsbayar
By Nikki D. Erlick, Crimson Staff Writer

Blueprints for the ongoing renovation of Dunster House, which began in June, have been adjusted to incorporate community feedback on the recently renovated McKinlock Hall in Leverett House and Stone Hall in Quincy House, a leader of the House Renewal effort said Sunday.

According to Faculty of Arts and Sciences Assistant Dean of Physical Resources Merle Bicknell, student responses from the two test projects have informed changes, including enlarging shower spaces, adding study niches in residential halls, and including a “smart classroom” in Dunster, which is the first complete House to undergo renovation.

“Each project provides the opportunity to confirm the usefulness of specific construction details...and the functionality of sustainable strategies,” Bicknell wrote in an email to The Crimson.

She noted that Dunster will include a rainwater collection and reuse system, more energy-efficient LED light fixtures, and thermal improvements to its buildings following the “success” of those enhancements in McKinlock and Stone Halls.

Other Dunster House renovations that mimic those in Stone and McKinlock Halls include the construction of en-suite kitchens in tutor residences, inclusion of ceiling fans in student bedrooms, improvement of WiFi access in the House, and installation of air conditioning in common areas. Aligning with a commitment to increase accessibility, the renovated House will also be wheelchair-accessible.

Bicknell wrote that the standards for Dunster’s residential spaces will resemble those for the finished projects in Quincy and Leverett, but she added that “the common spaces will vary due to individual House traditions and preferences, as well as the potential and constraints of the existing architecture.”

While Dunster cannot accommodate a theater, like McKinlock’s renovated Library Theater, the pre-existing ceramics studio, grille, and gym will all receive upgrades during renewal, as perviously reported. The addition of seminar rooms will help to address the previous shortage of meeting spaces in the House.

“At Dunster, as at McKinlock, traditional spaces such as the Dining Hall, Library, Master’s House, and Junior Common Room will be restored to their original beauty, with modern systems and technology—all hidden—to ensure their long-term usefulness and importance to Dunster House,” Bicknell wrote.

Renovations on Dunster began on June 2. The House is slated to reopen for the 2015-2016 school year.