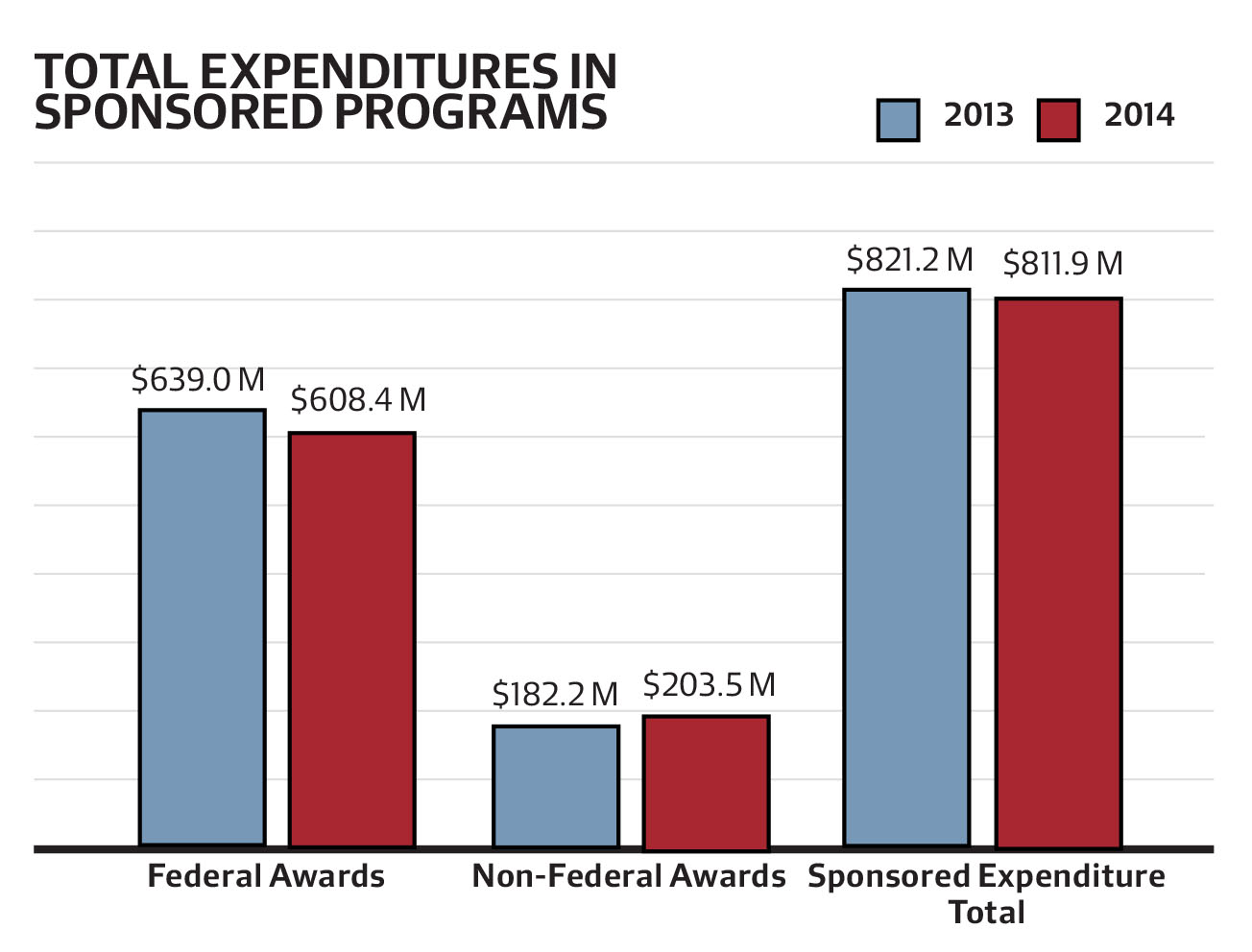 Federal funding for Harvard research fell by 5 percent to $608 million in the University’s fiscal year 2014, the first full Harvard fiscal year after the federal government enacted broad budget cuts collectively known as sequestration, according to the Office for Sponsored Program’s annual report.

During the same period, non-federal funding from external entities like corporations and foundations grew by 12 percent to $203.5 million, slightly cushioning the years-long decline in federal funding granted to Harvard researchers, according to the November 2014 report.

The decline in federal funding granted to Harvard researchers follows a national trend in American higher education since March of 2013, when the sequester—slated to progressively trim $1.2 trillion total from all federal programs over 10 years—first went into effect. University President Drew G. Faust has warned against the dangers of sequestration, stating in her 2013 commencement address that “great ideas that could lead to improved human lives and opportunities, and improved understanding, are left without support or the means for further development.”

“We had anticipated that the federal dollars would drop...between 7 and 10 percent, so we did slightly better,” Breen said.

According to Kevin Casey,  associate vice president for Public Affairs and Communications, the increasing number of proposals may indicate that researchers are spending more time writing grants and less time doing actual research.

“I think Harvard’s holding a high level competitive advantage because of the quality of our faculty, but they’re working harder, spending more time, and it’s become more stressful to the work,” he said.

Organismic and Evolutionary Biology professor Peter R. Girguis said in an interview in October that he has been able to continue his research afloat despite the sequester “in no small part due to the amount of effort I put into writing research proposals.”

“Where I might have had to submit four to five proposals a year to support a medium sized lab, the last few years I’ve doubled or tripled that effort,” he said, adding that “proposals take on the order of weeks to months; these are not done in a day.”

According to Breen, Harvard Medical School in 2014 submitted the most proposals with 1,331.

Although Breen and Casey said that faculty members have been creatively addressing the decline in federal funding by crowdsourcing funds and reaching out to corporations and foundations, both agree that these efforts will never fully replace government support. Casey said that moving forward, there may be even greater federal reductions in the coming years.

“We’re working to forestall those, but the forecast is cloudy still because of sequestration,” he said.

The Medical School requested the largest amount of money—$940.7 million—followed by the Harvard School of Public Health and the Faculty of Arts and Sciences, “because of the sheer size of the school and the sort of breadth of research that they do,” Breen said. Of the $2.8 billion requested dollars for research, $1.7 billion came from the Longwood area of Harvard’s campus, comprised of the Medical School and the School of Public Health.

The 2014 report, unlike previous years, does not include financial breakdowns for each of Harvard’s individual schools. According to Breen, faculty overlap between schools and institutes made it difficult to determine which schools received certain funds.

The National Institute of Health continued to be Harvard’s main source of federal funding for research, offering $421 million. Unlike in previous years, the report did not specifically define Harvard’s lead non-federal funder, which has historically been the Bill and Melinda Gates Foundation, but it noted that foundations on the whole provided the most non-federal funds to Harvard researchers.

—Staff writer Steven R. Watros contributed to the reporting of this story.