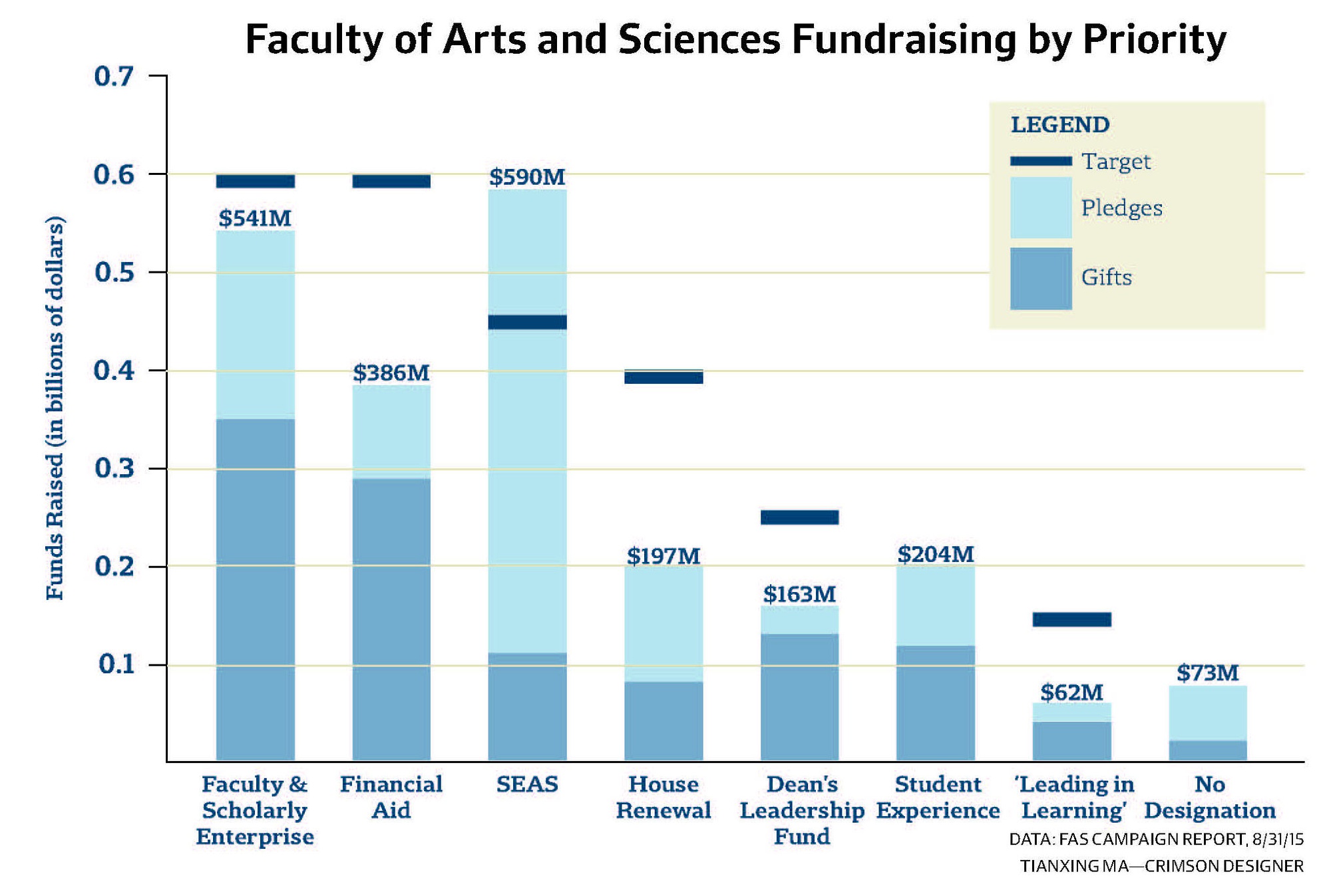 While fundraising for the School of Engineering and Applied Sciences has far exceeded its goal, some campaign priorities—such as House renewal and financial aid—lag, according to an internal August report on Faculty of Arts and Sciences campaign progress.
By Karl M. Aspelund and Meg P. Bernhard, Crimson Staff Writers

Two years into the public phase of the Faculty of Arts and Sciences’s capital campaign, Dean Michael D. Smith said the fundraising drive will begin to focus its efforts especially on priorities that are falling behind—House renewal and funding for new teaching techniques.

As of August, the FAS portion of the University-wide fundraising drive had reached $2.2 billion, just short of its $2.5 billion public goal. Some priorities have surpassed or neared their fundraising goals, like the School of Engineering and Applied Sciences and “Faculty and Our Scholarly Enterprise,” which funds faculty research and hiring.

Others are not so far ahead. In particular, Smith highlighted the difficulties of fundraising for the “Leading in Learning” priority—meant to fund innovations in teaching and classroom use—and undergraduate House renewal, suggesting that it is not easy to articulate the visions for those initiatives, which are often abstract. Fundraising for both priorities were at just under half their stated goals in August.

“Leading in Learning,” Smith said, “is a little hard...to tease apart” for alumni, and it has been “one of the toughest” for which to fundraise. As of August, that priority had raised $62 million of its $150 million goal.

Fundraising for Harvard’s House renewal project, meanwhile, had reached $197 million as of August, just under half its goal of $400 million.

Smith said it was difficult to articulate a vision for undergraduate House renewal before the first construction projects concluded, given that donors could only view blueprints of plans. Older donors also lived in a “different world” than current undergraduates, Smith said, meaning that some recall a campus without co-ed housing, among other generational changes.

“It was hard in the beginning,” Smith said. “Not many people in the world can look at a flat set of plans and say, ‘Oh, I know exactly what it is going to look like.’”

Prospective donors can now tour renewed Houses and see how students use their new spaces. Smith said the finalized renewal of Dunster—the first full House to undergo renovation—has helped, given that a completely renovated House can give a more holistic view.

Still, Smith acknowledged that it remains difficult to talk to donors about projects that have not yet started.

“You’re asking somebody to imagine a lot,” Smith said.

House renewal construction is currently on a one-year break; it will resume next summer with the renovation of Winthrop House.

In the wake of the release of the results of Harvard’s sexual assault climate survey, Smith also said, he anticipates that FAS may use unrestricted campaign funds to provide sexual assault prevention resources to its students and faculty.