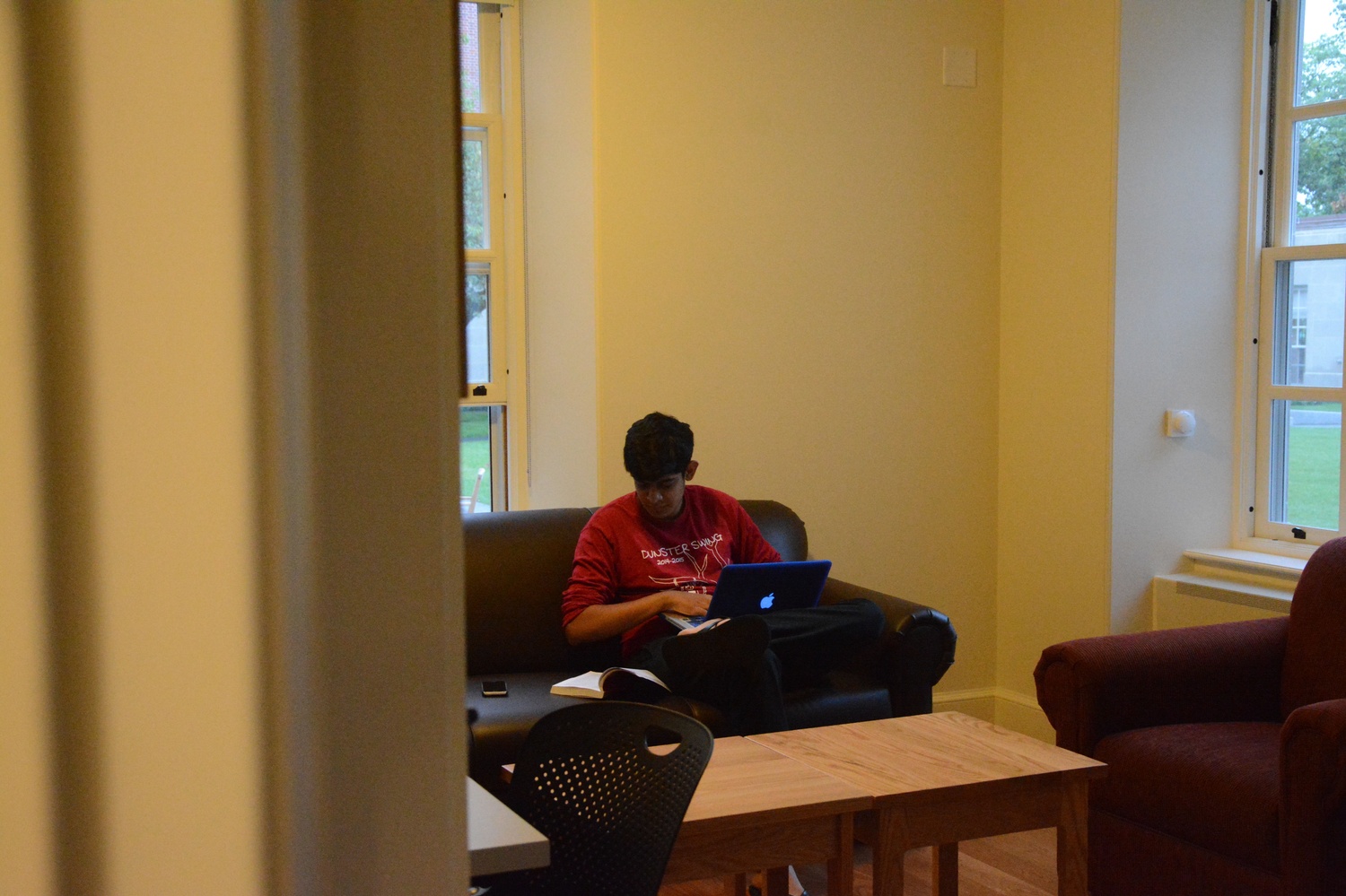 Parijat Lal ’17 does his work in a Dunster House common room on Wednesday afternoon. Many undergraduates are critical of the hallway common rooms featured in recent house renovations. By Helen Y. Wu
By Noah J. Delwiche, Crimson Staff Writer

Undergraduates are critical of the hallway common rooms featured in recent House renovations at the expense of private space, prompting the College to incorporate feedback to tweak upcoming construction plans for its expansive House renewal project.

Several years into a more than $1 billion initiative, Harvard has renovated three of its iconic undergraduate residential Houses, finishing part of Quincy House in 2013, part of Leverett House in 2014, and all of Dunster House this fall. This year, construction is on a one-year break, but Winthrop House will undergo renovation starting next summer, and Lowell House will follow in 2017.

While the renovations so far—with all the flashiness of new gyms, pool tables, and common spaces—have received positive feedback from undergraduates, the topic of in-suite common rooms, or the lack thereof, has struck a particular chord with students and even some alumni donors. While the renewed buildings do feature rooms with private common space, floor plans also include clusters of single and double bedrooms that share a common room at the end of a hallway. This set up has proved much less popular with students.

Dunster House Committee co-chair Stephanie G. Franklin ’16 for the most part praises her renewed House, but her chief complaint is that while she lives in a suite with a private common room, many of her peers do not.

“As much as is possible, it should be a priority in the future that they try to have more in-suite common rooms because a hall common room is not quite the same thing,” she said.

Peter L. Malkin ’55, a top Harvard donor and a member of the Faculty of Arts and Sciences’ capital campaign steering committee, advocated for decreasing the frequency of off-corridor doubles. He said he has heard general student dissatisfaction with the lack of private common rooms.

“The former arrangement led to a greater possibility to create lasting friendships among people who were your suitemates,” Malkin said, referring to in-suite common rooms.

College administrators have heard these critiques. Dean of Student Life Stephen Lassonde, one of the administrators involved in House renewal planning process, said planners have set a target percentage for the ideal ratio of in-suite common rooms in renovated Houses, although he did not specify how much.

“We’re very attuned to this idea of in-suite common rooms and their importance to students feeling like they’re at home,” Lassonde said. “We did some change even between Leverett and Dunster, and then change again between Dunster and Winthrop, and now we’re using that for the next plan."

Lassonde added that the College will use the break between construction projects to hold additional student focus groups and incorporate modifications before renovations continue next year.

At Winthrop House, the next to undergo renovation, undergraduates have already met several times to critique the renovation designs. Winthrop HoCo co-chair Marlee A. Ehrlich ’16 said common rooms have been a topic of discussion, but student opinion is not unanimous.

“There’s a big push for more common spaces within the House as a whole, but also people like having their common spaces in their rooms as well,” Ehrlich said.

To accommodate some undergraduates’ desires for increased on-campus social space, Adams and Cabot Houses recently opened up renovated common areas for student use. Cabot’s junior common room, now dubbed “the Aquarium,” features a kegerator, and students will host a large kickoff party in it this Saturday.