Harvard reached a budgetary surplus of $62 million on revenues of $4.5 billion in fiscal year 2015 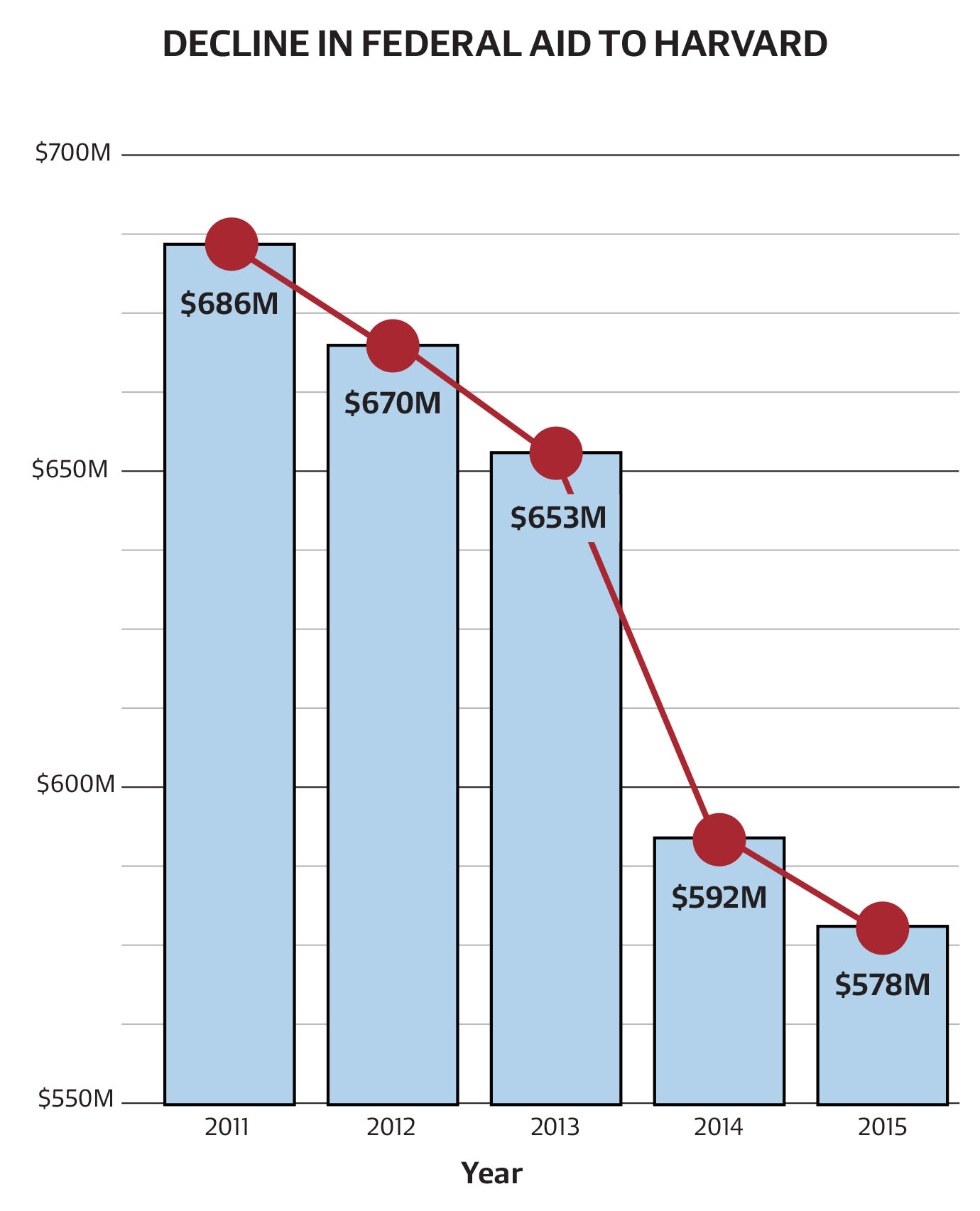 Despite deep cuts in federal support and poor endowment returns, Harvard reached a budgetary surplus of $62 million on revenues of $4.5 billion in fiscal year 2015, according to its annual financial report. The University’s net assets also rose to $44.6 billion. 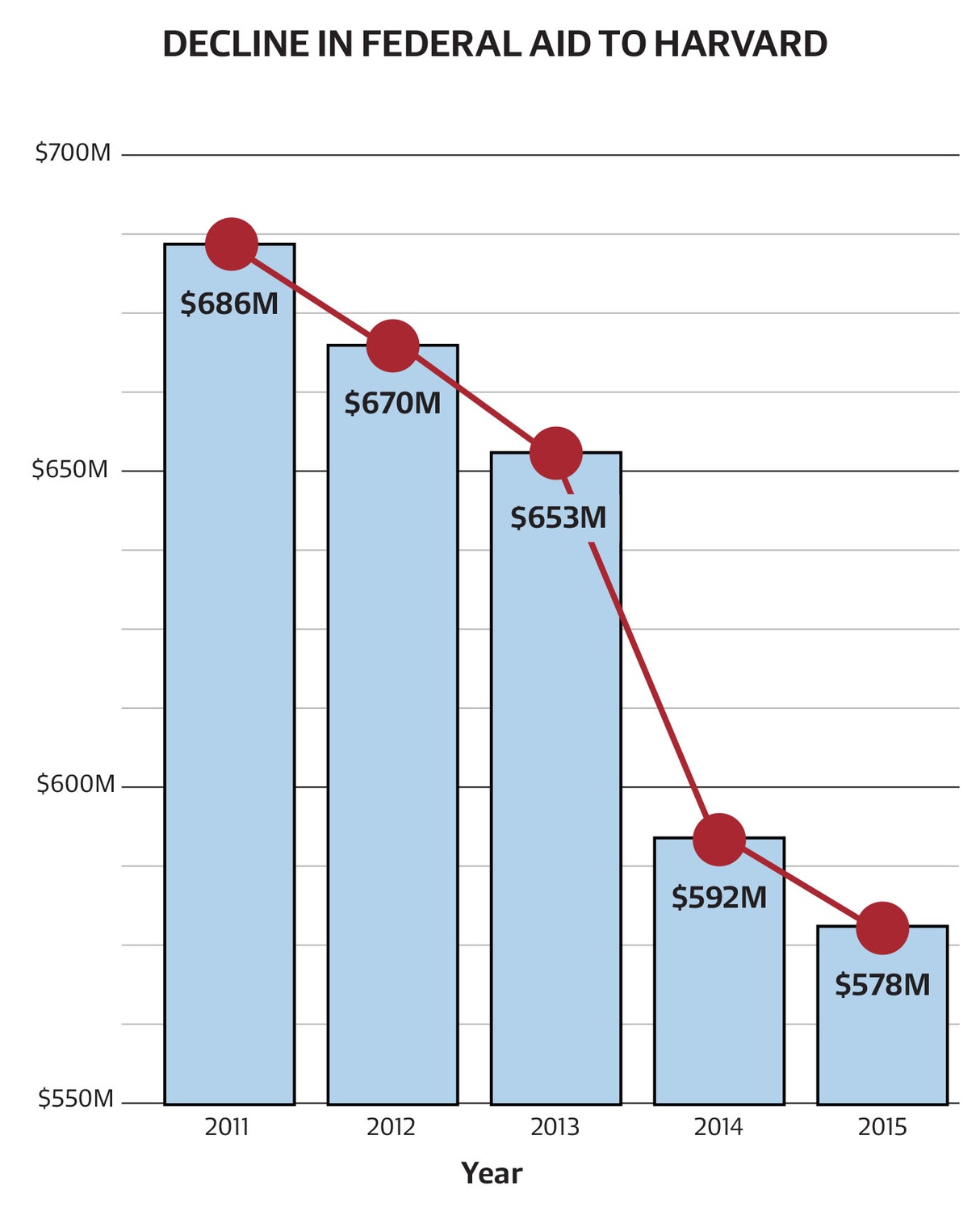 One of the major issues that Harvard faces financially is the decrease in federal funding for universities across the country. In FY 2015, federal support for University activities totaled $578 million, down 2 percent from the $592 million in FY 2014 and 16 percent from the all-time high of $686 million in FY 2011, according to the report, which was released on Thursday.

Executive Vice President Katherine N. Lapp said in a statement that private foundations and other non-federal sources have stepped up their contributions to minimize the damage to University operations in response to the federal grant cuts. In FY 2015, non-federal sponsored support was up 10 percent, against the 2 percent drop in federal aid.

Despite poorer year-over-year endowment returns, down from 15.7 percent to 5.8 percent, Thomas J. Hollister, Harvard’s vice president for finance, emphasized how crucial the endowment is for the University’s function.

In FY 2015, which ended on June 30, endowment income made available for operations made up 35 percent of the University’s total revenue, or $1.6 billion, an increase of 4 percent over FY 2014. Within the Faculty of Arts and Sciences, which includes both Harvard College and the Graduate School of Arts and Sciences, endowment income plays an even more critical role, covering the costs of roughly 50 percent of all FAS activities.

On top of the 35 percent of University’s revenue provided via endowment income, annual current use gifts from donors pay for 10 percent of the University’s operations, according to the report.

Every year, Harvard withdraws a predetermined percentage of money from the endowment for operations purposes. The value of this annual withdrawal is typically targeted by the University between 5 percent and 5.5 percent of the year end market value of the endowment. This year, the percentage, or “pay out rate,” sat at 5.1 percent, down from 5.6 percent in FY 2014.

For FY 2015, University-wide expenses were up 4 percent to just under $4.5 billion. The increase was largely driven by increases and changes in wages and benefits for University employees, Lapp said. Salaries, wages, and benefits make up roughly 50 percent of Harvard’s expenditures.

In addition to expenses committed to employees, the University invested $467 million, roughly 10 percent of its total expenditures, on projects and acquisitions in FY 2015. These expenditures include major capital improvements, such as the renewal of Dunster House, as well as planning and design for the upcoming overhauls of the Smith Campus Center and Winthrop House.

This is the first Harvard annual financial report for Hollister, who took the position last May to criticism from student groups, such as the environmental group Divest Harvard, who decried his close ties to the fossil fuel industry. Hollister took over for Dan S. Shore, who left to become CFO of OnShape Inc.