The Faculty of Arts and Sciences’ endowment grows to $16.1 billion 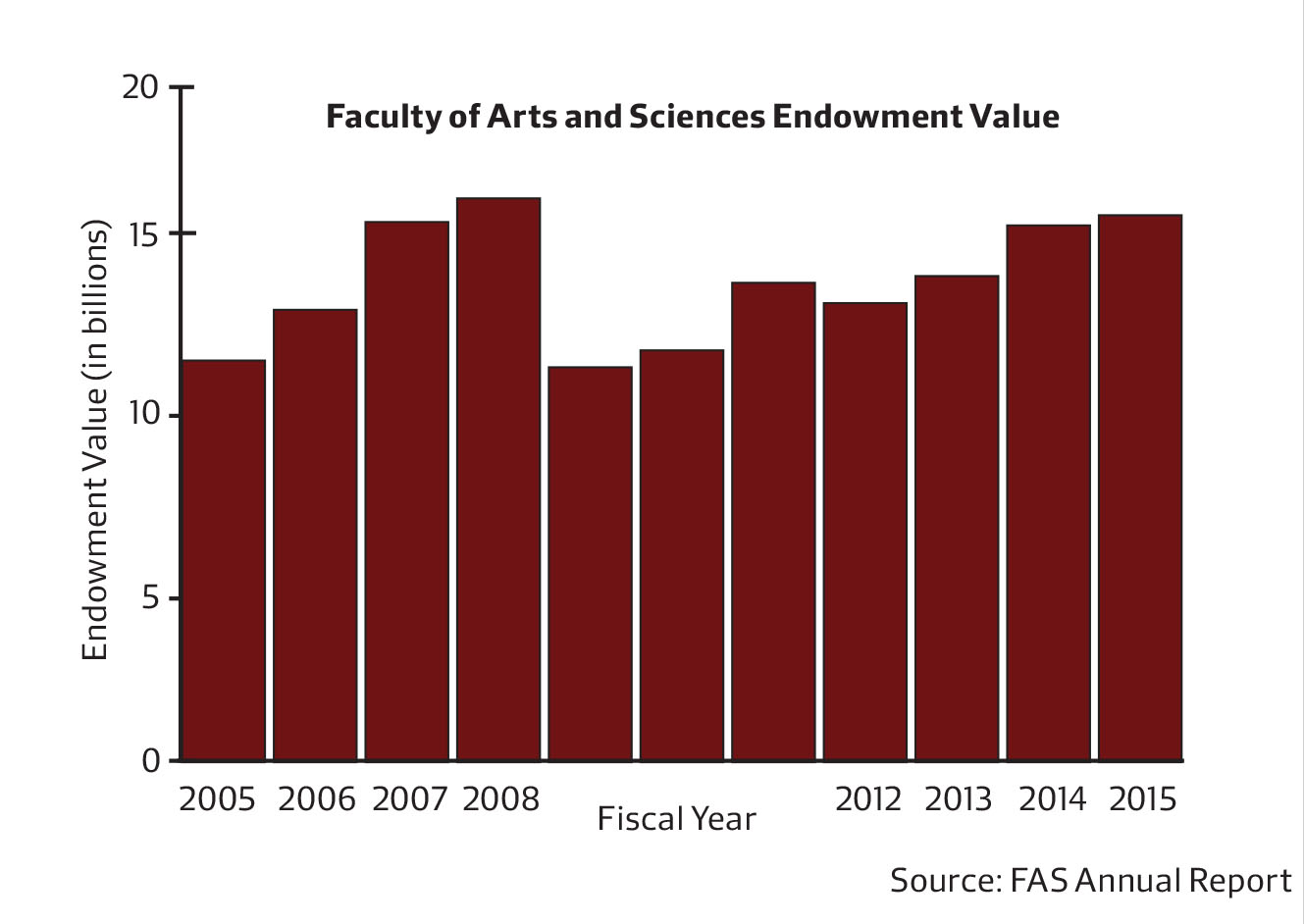 While the size of the Faculty of Arts and Sciences decreased slightly in fiscal year 2015, its endowment grew to more than $16.1 billion, the highest point since 2008.
By Karl M. Aspelund and Meg P. Bernhard, Crimson Staff Writers

After a year that saw a spike in faculty growth for the first time since the financial crisis, the size of the Faculty of Arts and Sciences stalled again in fiscal year 2015, shrinking by one professor, according to the school’s annual report.

In fiscal year 2014, Harvard’s flagship faculty grew to a record size of 730 junior and senior professors, the largest in its history, after remaining primarily flat since 2008.

This past year, however, FAS cut back on its ladder faculty hire searches by about a third, partly to reallocate funds for faculty research, according to FAS Dean Michael D. Smith. The cuts come at a time when federal funding for research at Harvard and across the country continues to decline.

While the size of the Faculty of Arts and Sciences decreased slightly in fiscal year 2015, its endowment grew to more than $16.1 billion, the highest point since 2008. By Vivian W. Wan

But while the size of the Faculty decreased slightly in 2015, its endowment grew to more than $16.1 billion, the highest point since 2008, marking continued recovery since the onset of the financial crisis—when the FAS endowment’s market value of $16.7 billion fell $5 billion in a single year. FAS also ran a deficit of $11.7 million in 2015, a decrease from the $77 million deficit of the previous fiscal year.

FAS financial and faculty reports—released to faculty members ahead of their monthly meeting on Tuesday and shared with The Crimson—offer glimpses of the challenges facing Harvard’s flagship faculty as it moves into the 2016 fiscal year.

The reports describe a faculty body feeling the effects of federal research funding decreases, an endowment growing and approaching its pre-financial crisis height, and an overall successful capital campaign with certain fundraising priorities lagging. They also outline a struggle with diversity: About a third of women up for tenure last academic year left FAS before their final review, a trend the annual report terms “troubling.”

The Faculty of Arts and Sciences saw a stall in growth in fiscal year 2015, cutting faculty searches by 34 percent partly in an effort to reallocate money to finance research.

The total number of ladder faculty members, including junior and senior professors, dropped from 730 to 729 in fiscal year 2015, and FAS conducted searches for just 56 tenure and tenure-track positions, compared to 85 in fiscal year 2014.

This came as federal funding for FAS research fell by 6.3 percent to $141.9 million between fiscal years 2014 and 2015, following a 2.2 percent decline between 2013 and 2014, according to FAS fiscal managerial reports. 2014 was the first full fiscal year after the federal government enacted broad budget cuts known as sequestration.

The cuts deeply affected federal entities including the National Institutes of Health, the National Science Foundation, and the Department of Defense—the three agencies accounted for the majority of all sponsored FAS research in the last fiscal year.

Although FAS’s external research funding fell in 2015, the school’s endowment remained strong, at $16.1 billion. Long-term investments continued several years of growth, with endowment returns of 5.8 percent, marking a decrease from the two-digit percent returns posted in fiscal years 2013 and 2014.

“Unfortunately, all is not good news in the report on faculty trends,” Smith wrote in the FAS annual report, pointing to the percentage of women who leave Harvard’s tenure track before their final review.

The report details a trend in the departure of female faculty members before they stand for full-time tenure review. Last academic year, only 66 percent of women up for the final tenure review—which determines whether or not junior faculty members will be promoted to full-time, tenured professors—actually stayed at Harvard through that review, compared to 78 percent of men, a difference the report calls “troubling.”

In interviews with tenure-track women who were leaving Harvard, administrators found a “striking” reason that they left was an uncomfortable culture in their respective departments, according to the report.

“In many cases, these faculty members found that the culture of the department was not conducive to their productivity and was a significant factor in their decision to leave,” the report reads.

Still, women’s representation on the Faculty grew slightly in fiscal year 2015, up to 28 from 27 percent in 2014. Minorities also saw marginal growth, bumping to 21 percent from 19 percent last year.

FAS pulled $70.1 million from its endowment in part to help finance the renovation of the undergraduate Houses, continuing to shift unrestricted funds to cover House renewal costs. Meanwhile, the House renewal project lagged behind other fundraising priorities—by August, it had not yet reached the halfway mark for its $400 million portion of the FAS’s $2.5 billion capital campaign.

Smith said recently that the challenge of articulating the vision for what was long only an abstract initiative made raising funds for the project more difficult than some of the campaign’s other priorities.

Some priorities, like the School of Engineering and Applied Sciences—bolstered by a $400 million gift this June—and the “Faculty and Our Scholarly Enterprise” category have surpassed or neared their fundraising goals. The “Leading in Learning” priority, along with House renewal, lag behind, not yet halfway to their goals.

According to Smith, fundraising efforts will now focus more on these lagging priorities, which he said are often difficult for alumni to conceptualize.

Overall, the FAS capital campaign raised $767.7 million in fiscal year 2015 toward its $2.5 billion goal, according to an update distributed to the Faculty prior to its Tuesday meeting. In total, the campaign has raised $2.2 billion as it enters the third year of its public phase.

Over the fiscal year, the FAS campaign attracted 44,623 donors, including individuals, corporations, and foundations, from 50 states and 107 countries.

As of August, 60,835 donors had contributed over the course of the entire campaign, 40 of whom had each given more than $10 million and a majority of the donations. Forty-three percent of total FAS funds raised, a plurality, originate from the New York area.

Some alumni classes have donated more than others. The class of 1975, for example, has raised $72 million for their 40th reunion campaign. Five years out of their graduation, 741 members of the class of 2010 have contributed to the campaign thus far.