Despite Changes at Penn, Harvard Stands by ‘No-Loan’ Label 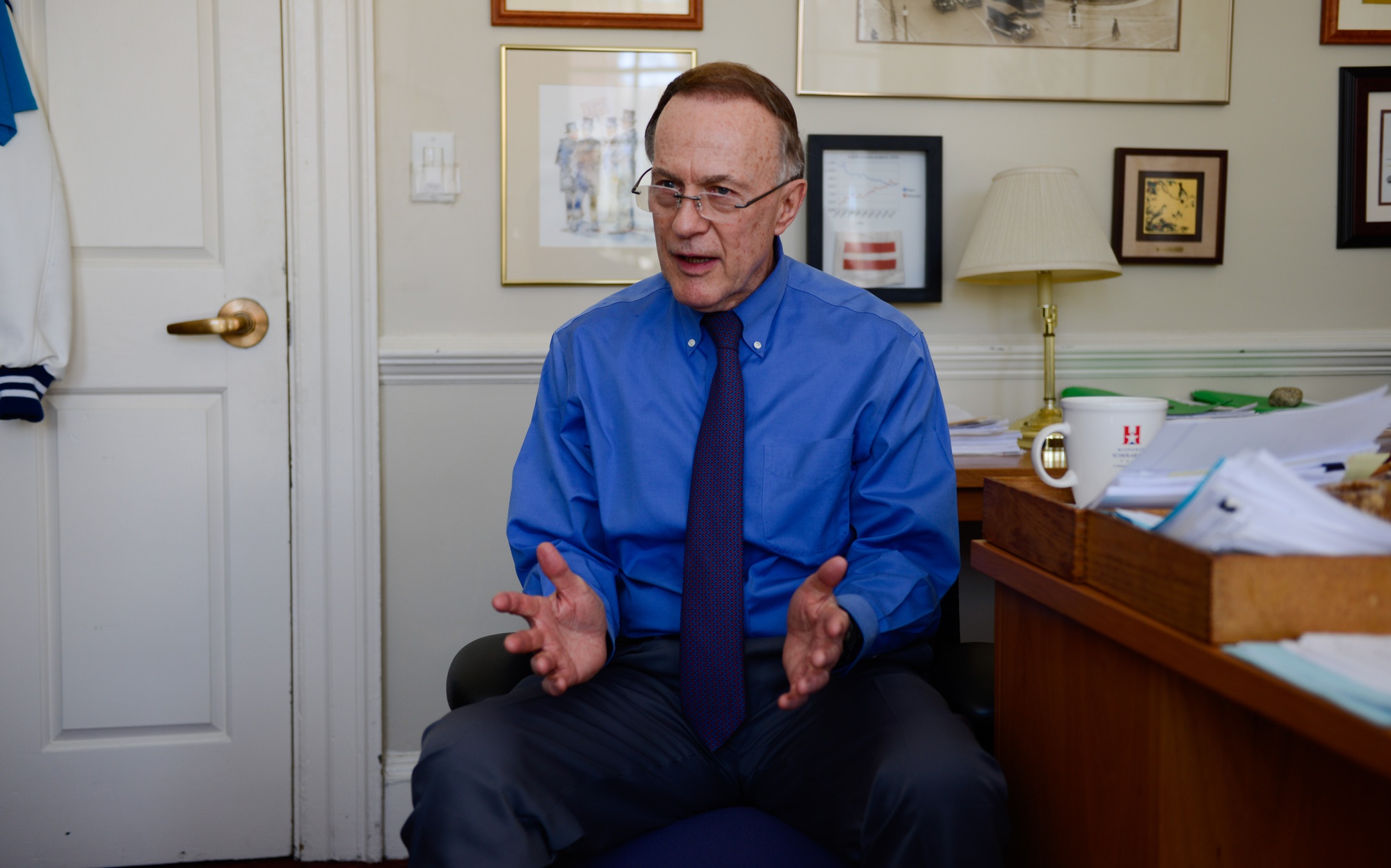 Dean of Admissions and Financial Aid William R. Fitzsimmons ’67 has speculated that the Admissions Office’s use of a new low-income student outreach program called Harvard College Connection may have contributed to a larger pool of applicants than in previous years.
By Daphne C. Thompson, Crimson Staff Writer

Despite the University of Pennsylvania’s decision to rebrand its financial aid program as “all-grant” instead of “no-loan”—reflecting complaints that many Penn students do, in fact, take out external loans—Harvard’s financial aid department will continue to tout its “no-loan” policies to applicants.

Prior to Penn’s decision to rename its program in August, both Harvard and Penn referred to their financial aid programs as “no-loan,” meaning that their aid packages replaced undergraduate student loans with university-funded grants.

Last year, however, Penn student groups criticized the University’s “no-loan” characterization of its policies, arguing that some still took out loans to cover costs not addressed in their financial aid packages. 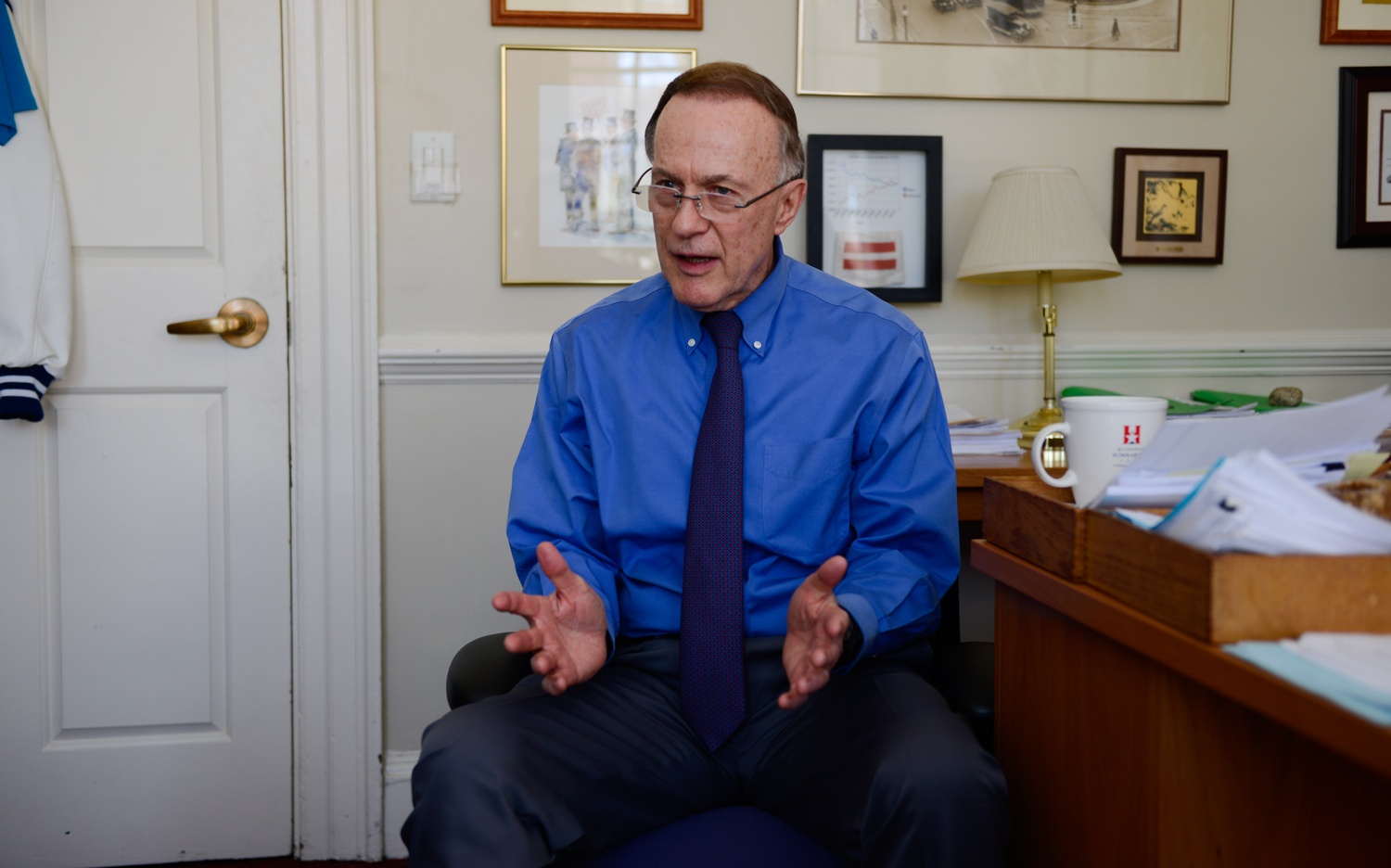 Dean of Admissions and Financial Aid William R. Fitzsimmons '67 speaks during an interview with The Crimson last spring. By Alana M Steinberg

“We have found that talking about ‘no loan required’ is a key element of how we reach out to students,” Fitzsimmons said in an interview that Faculty of Arts and Sciences spokesperson Rachael Dane also attended. “The words ‘free’ and ‘no loan’ really resonate.”

Still, according to Sally C. Donahue, Harvard’s financial aid director, close to 30 percent of Harvard’s Class of 2015—about 300 students—took out loans during their time at Harvard. For those who received need-based grant aid, the average student debt at graduation was just over $5,200, significantly less than the national average of $35,051.

“It is our hope that their postgraduate plans not be affected by the financial constraints posed by a more typical student debt level,” Donahue wrote in an email.

While Harvard’s financial aid website says students are not expected to take out loans as part of their financial aid package, it also notes that some “may choose to pursue loans to help cover [their] student or family contribution.”

Given the frequency with which students borrow, even at “no-loan” schools, David Mainiero, the director of college counseling at InGenius Prep, said he was skeptical of how many universities brand their financial aid programs.

“I don’t think that colleges or institutions of higher education should be using what amounts to, at worst, Orwellian doublespeak. At best, it’s marketing language,” Mainiero said. “An asterisk isn’t enough; they need to be upfront with people about what they can afford.”

Fitzsimmons said the “no-loan” label can be attention-grabbing, but added that he tries to explain Harvard’s financial aid program in more detail in his conversations with potential applicants.

“Lots of students are now getting information on their mobile phones. That means we have about eight seconds to get the point across,” Fitzsimmons said. “But the more ways we can describe what we do, the better.”