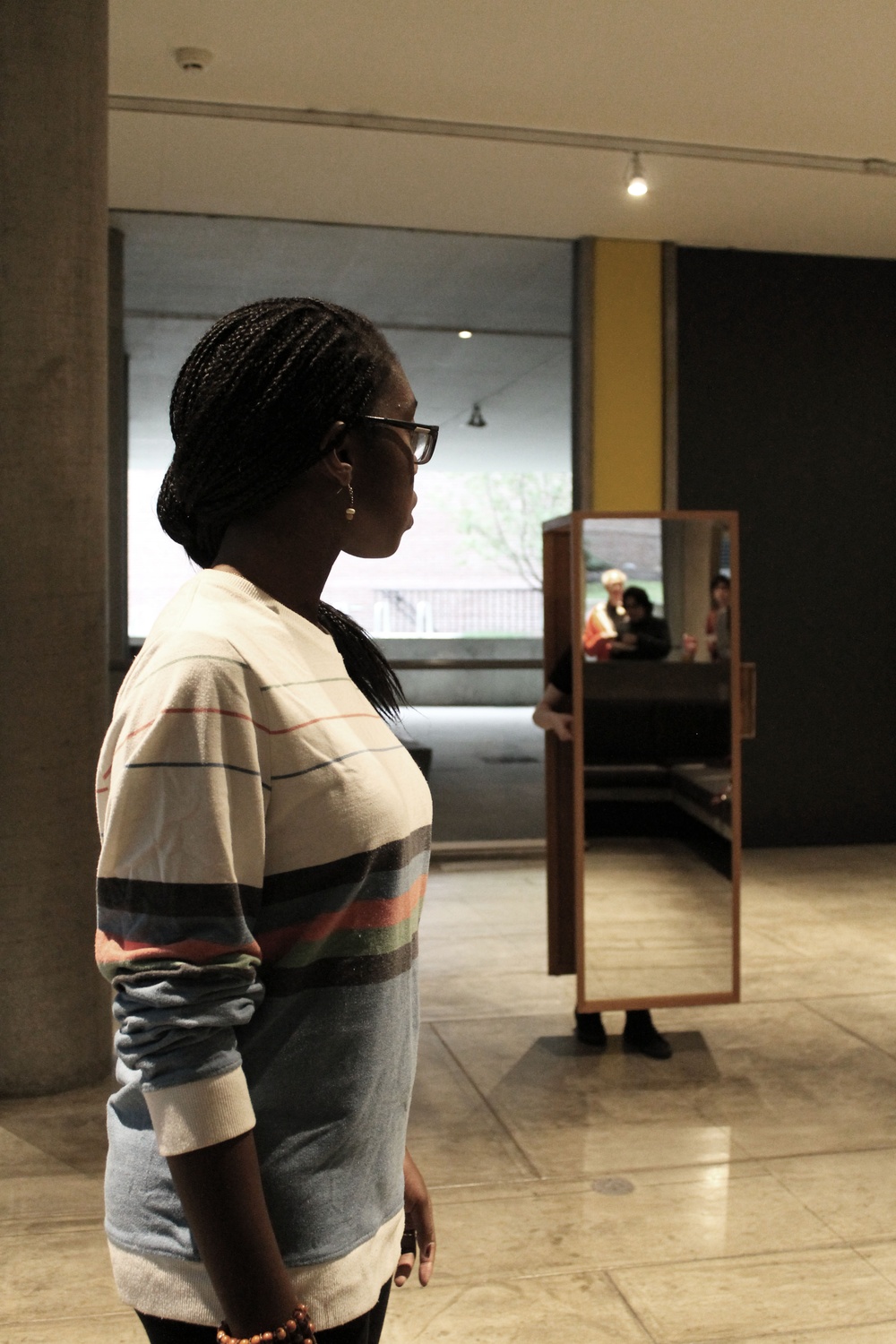 Ivie Tokunboh ’16 guides fellow dancer Elizabeth Leary in an exhibit, entitled “Two Walking Mirrors for the Carpenter Center,” which will be open to the public until October 25. By Eleanor K. Lieberman
Advertisement
Advertisement

Colleagues— It is my second time reporting undercover from the tastefully-glorified bowels of the Harvard art world. Nearly a year ago, I risked my metaphorical, aesthetic skin to faithfully recount the student opening of the Harvard Art Museums. I write to you today to convey the recent opening of sculptor Josiah McElheny’s “Two Walking Mirrors” at the Carpenter Center last Thursday, Oct. 1, at 5 p.m.
By Henry S. U. Shah

It is my second time reporting undercover from the tastefully-glorified bowels of the Harvard art world. Nearly a year ago, I risked my metaphorical, aesthetic skin to faithfully recount the student opening of the Harvard Art Museums.

I write to you today to convey the recent opening of sculptor Josiah McElheny’s “Two Walking Mirrors” at the Carpenter Center last Thursday, Oct. 1, at 5 p.m.

I arrive promptly at 5o’clock, stumbling in from the rain to discover a room bubbling with soft conversation and muted but cultivated anticipation for “the show” to begin.

Two black-clad student bartenders serve a room of about 50 patrons of the finer, more obscure, arts. They purvey wine and snazzy lemonades from Trader Joe’s, all the while gesturing to a table that is sumptuously bedecked with too-grainy tortilla chips, salsa as white and mild as Duluth, and a selection of nearly out-of-season fruits. There are also dad beers—darkened ciders and lightened lagers —which are quickly snatched up by the many young men in tweed.

These men had a plan for their libations, but were unsure how to then proceed.

“Yeah man, I heard free food and drink…” He raises his eyebrows. “Or just drink. What’s with the mirrors?”

The mirrors are, in fact, the whole shebang. McIlheny has arranged two five-foot parallel mirror structures on woodish-looking pedestals in the center of the gallery space, conveniently out of the way of the bar line. Each set of parallel panels is joined together by thin beams of wood. Two straps connect the mirrors. According to the program “actual human forms…inhabit the sculptures on a published schedule, transforming them into a kind of costume.”

The audience is waiting with bated breath for said transformation.

The audience, ah yes. The aforementioned men in tweed, are subsumed in a larger subcategory, those wearing chunky, artistic glasses. The ratio of glasses-wearers to non-glasses wearers stood at roughly 1:1, although many of the unbespectacled (or alas, we may never know, debespectacled) part before the show begins.

And it takes a while for the show to begin. A woman who looks like a female Mr. Ratburn, the devilish third-grade teacher from the Arthur series, is taking notes and talking rapid fire about “funding development.” She pauses to exchange a few words with an earnestly-cardiganed older man who is wearing a vaguely floral scarf.

“I thought it was supposed to start right at 5.”

The man shrugs. He’s drinking a dad beer. No reason to complain.

“I was expecting something wonderful. They’re just mirrors.”

They are, indeed, just mirrors, until Elizabeth S. Leary, a student at the School of the Museum of Fine Arts, walks up to and puts on one of the mirrors. Two student-attendants help her off the pedestal, and she begins tracing the fine line that McElheny has drawn on the floor.

The crowd quickly hushes. Those who came only for the food dart out before they are forced to participate in this “Society of the Spectacle,” and the others turn their heads towards the aesthetic moment like sunflowers towards a weary late fall beam.

Leary moves with poise and grace, but it’s clear that moving in the mirror is no easy feat.

A woman behind me whispers, “She’s gonna break her face.”

The attendants move in seemingly random horizontal and vertical directions around the floor, following no discernable pattern.

Staff released from their shift at the Art Museums take advantage of the free happy hour next door to banter curatorially.

“I know we’re imprisoned in the present moment, but you just have to wonder about the stasis in the piece.”

“Yeah, I know there was a performance in Brooklyn, but I have no idea where.”

“Somewhere…” The taller of the two trails off, and they both guffaw knowingly.

The stasis continues for a good 20 minutes. Right before the end, one of the few survivors of the non-lensed contingent whispers to a buddy, “As soon as I understand this, I’m getting the hell out.”

Leary eventually finds her way back to the pedestal. The attendants lift the mirror off, and she sighs with relief.