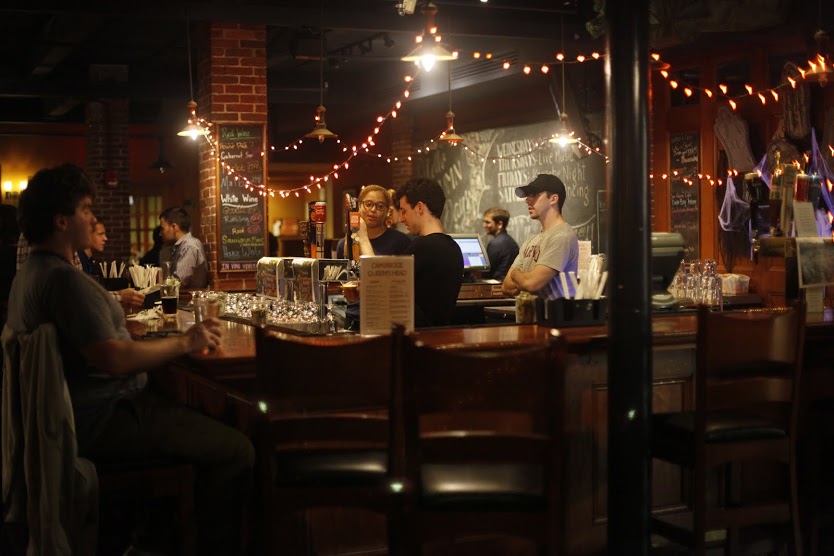 It’s a chilly Saturday night in October, and, below Annenberg, the Queen’s Head Pub has been transformed into a space that bears a striking resemblance to the hottest of nightclubs, with bone-white strobe lights casting the dancing crowd in stark relief. It’s College Night at the Queen’s Head, and, behind his turntable, Vivek Jayaram ’17, aka DJ J-Rom, is directing the crowd’s tempo as he modulates the music pervading the room. It is his second gig at the Queen’s Head, and he is utterly controlling the space, to the crowd’s delight. “At about 11:45 pm, a flood of other people just stream onto the dance floor,” Jayaram says. “I showed a video to some of my friends and they’re like, ‘I can’t believe that was the Queen’s Head.’”

The Queen’s Head Pub has launched a new initiative this semester: College Nights on Thursdays and Saturdays. During these evenings, student bands and DJs come out to perform, providing something akin to a concert experience only a stone’s throw from the Yard itself. These College Nights have the potential to prove crucial to the health of Harvard’s student band scene, and their growing popularity indicates the existence of a heretofore untapped niche in the large Harvard social scene.

THE STRUGGLE FOR SPACE

Canonically, being in a band has never been painted as an easy prospect; the trope of the up-and-coming band, struggling to get gigs, is not uncommon. Harvard bands do not, perhaps, lead the threadbare lives traditionally associated with the struggling musician, but being in a band at Harvard carries its own share of difficulties.

A fair few of these difficulties are infrastructural, such as Harvard’s scarcity of band-friendly practice rooms. Though there are many practice spaces available on campus, most of these are ill-suited to the unique needs of student bands. “There are a few vestigial drumsets from years ago, but there aren’t really places to rehearse here in a well-stocked way,” says Miles Hewitt ’17, songwriter, guitarist, and sometime pianist for The Solars. Most practice spaces, especially those located in houses, do not allow electric instruments due to concerns about noise. However, there are a few practice spaces that do cater to student bands—the Quad Sound Studio is one such space, and there are soundproofed, collaborative spaces below Memorial Hall and in the SOCH—but these spaces are relatively few compared to the bounty of other, more traditionally-oriented practice spots. “I have to be honest and say that I’m a little bit discouraged by the number of practice spaces—particularly with drumsets—that there are on campus,” says Stephanie M. Johnson ’18, Off the Record’s pianist. “It makes it really hard to rehearse.” 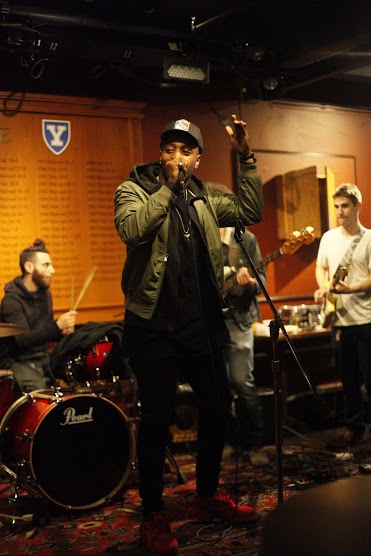 But there are less tangible difficulties that Harvard bands face, such as the struggle for publicity. Of all the manifold elements that contribute to a band’s success, publicity is viewed by bands on campus as among the most important factors. And the best, most basic method for a band to improve its reputation and build up its credibility is by performing as much as possible, according to Ethan I. Simon ’16, bandleader and pianist of The Intrinsics. “You take every gig because you never know which one’s going to be the gig that gets you those other gigs,” Simon says.

For student bands, however, locating opportunities to perform at Harvard can be a trying process. “Getting to play here at Harvard is something I’m really interested in pushing more for,” Johnson says. “But it’s actually much harder than I anticipated to find gigs on campus.”

Most gigs are secured through informal, word-of-mouth channels, and the services of less well-established bands tend to be rarely solicited due to their relative obscurity. These difficulties are compounded by the lack of a system to connect student bands with organizations looking for live music. “I would love to have some kind of newsletter or email list or even just knowing who’s in charge of the events,” Johnson says.

The difficulties posed by the somewhat opaque process of securing gigs is compounded by a more general dearth of opportunities to perform at Harvard. Many student bands, such as The Solars, Off the Record, and Margarine, opt to play at other schools, such as Berklee and Tufts, or at other venues in Boston, such as Naga and the Middle East Nightclub. “There isn’t a space on campus where bands can just perform,” Hewitt says. "At other colleges, there is like a concert space that is the dedicated concert space on campus. And they have enough bands that they can have shows three times a week, and people will go to them…that’s not how things are designed here for a variety of reasons.”

Most of the regularly available Harvard gigs consist of performances for select subgroups of Harvard affiliates. “You can play House formals, you can play a final club or a party,” Johnson says. “That’s all I really know of [within Harvard].” These performances, however, have the disadvantage of restricting bands’ audiences, which serves as an obstacle to their need to build their reputation in order to secure more performances.

This lack of dedicated, reliable spots to listen to live student music is a factor that Further dampens the Harvard student body’s interest in the live music scene. According to Hewitt, The hardworking ethos and loaded workweeks common to many Harvard students can often translate to a certain reluctance to spend leisure time outside established comfort zones “People don’t just go to shows to go to a show. There isn’t a lot of impetus to be going to people’s performances in general,” Hewitt says. “I wish I saw more people taking risks with their time to do something that they don’t necessarily know is going to pan out.”

All this seems to paint a particularly grim picture of the Harvard Band scene—which is perhaps unfair, given that many of the difficulties faced by Harvard bands are by no means unique to Harvard and are obstacles any band must face. But Harvard is beginning to respond to the needs of student bands via the Queen’s Head Pub’s College Nights, which, every Thursday, give student bands the opportunity to do a paid gig for the patrons of the Queen’s Head. This initiative has potential to provide student bands with exposure and a consistent venue, among other boons.

Playing gigs is an important way to garner publicity, and the Queen’s Head’s College Nights provide a regular, recurring opportunity for bands to play live shows, allowing them to show their mettle to the student body at-large. “There were a lot of different people there—a lot of HoCo people there also, which was awesome, because they were the ones who started setting us up with the House gigs and the student life event gigs,” says Abby L. Westover of the Lighthouse Keepers of her Thursday night performance at the Queen’s Head. “That was definitely a huge push for us publicity-wise.” At the same time, the open nature of the Queen’s Head also provides a venue for the student bands’ established fans to view them.

But beyond providing a venue and a viewership, the Queen’s Head’s College Nights are also important for building the confidence of young bands. For student groups that are just getting started, playing a paid gig in a comfortable setting can be an important step in cementing the group’s status as a band. The Queen’s Head has been the first gig for many freshman bands, such as Foxpack and Margarine, but, simultaneously, the Queen’s Head’s willingness to hire new bands does not feel like a mere sop to new acts. “It is very much a meritocracy. You submit your demo—if your demo’s good you can play a gig at the Queen’s Head,” Simon says. “There’s a certain legitimacy attached to the idea that there are a limited number of Thursdays, and you earned one of these Thursdays.”

By serving as a safe space for a first gig, the Queen’s Head is actively helping the prospects of Harvard’s younger bands. “The music scene in Boston can be shady and weird…there are a lot of predatory things on young bands,” Simon says. “As far as establishing a healthy music scene on campus, it’s really good that the Queen’s Head is paying acts. It’s Harvard as an institution saying, ‘This is worth something. It’s setting bands up for healthy second or third gigs.’”

The Queen’s Head’s College Nights are also valuable to more seasoned bands—they provide these acts with a reliable, increasingly well-known venue for live performance and, in so doing, contribute to the band culture at Harvard. “The Queen’s Head has been stepping up to kind of provide a place where people can go to see music once a week or twice a week,” Hewitt says.

This concept of inclusivity in social spaces is not new to anyone on campus—it is a conversation that’s being held repeatedly all around Harvard, with the changes surrounding final clubs, the upcoming redesign of the Smith Campus Center, and the whimsical UC proposal to turn Pusey Library into a freshman hangout spot. For all this talk, though, it seems as though the Queen’s Head is one of the few on-campus bodies actively pursuing this ideal of an open social space—the venue is indeed open to all Harvard undergraduates. And, as the College Nights have gained momentum, it has so far managed to maintain this inclusivity while still remaining an attractive destination for a night of music and dance.

This tricky balancing act is perhaps being aided by the atmosphere of candor that live music tends to foster. A big part of what gives the Queen’s Head’s College Nights their authenticity as open spaces is an honest desire on the part of the bands to share their craft with others. “Music, for most of human history, hasn’t been something that you could have,” Simon says. “You couldn’t own music. Recorded music is very young. It’s always been something that people do together, that people do for each other. I think there’s something really compelling about live music, and people working really hard to create good live music. And I think it’s great that the Queen’s Head is trying to do that, and trying to do that in a way that doesn’t feel illegitimate.” The Queen’s Head, by facilitating this communion between listener and musician, may well be the herald of a new breed of night-out for the campus and a new mode of expression for its bands.