School Work: The Benefits and Burdens of Campus Jobs 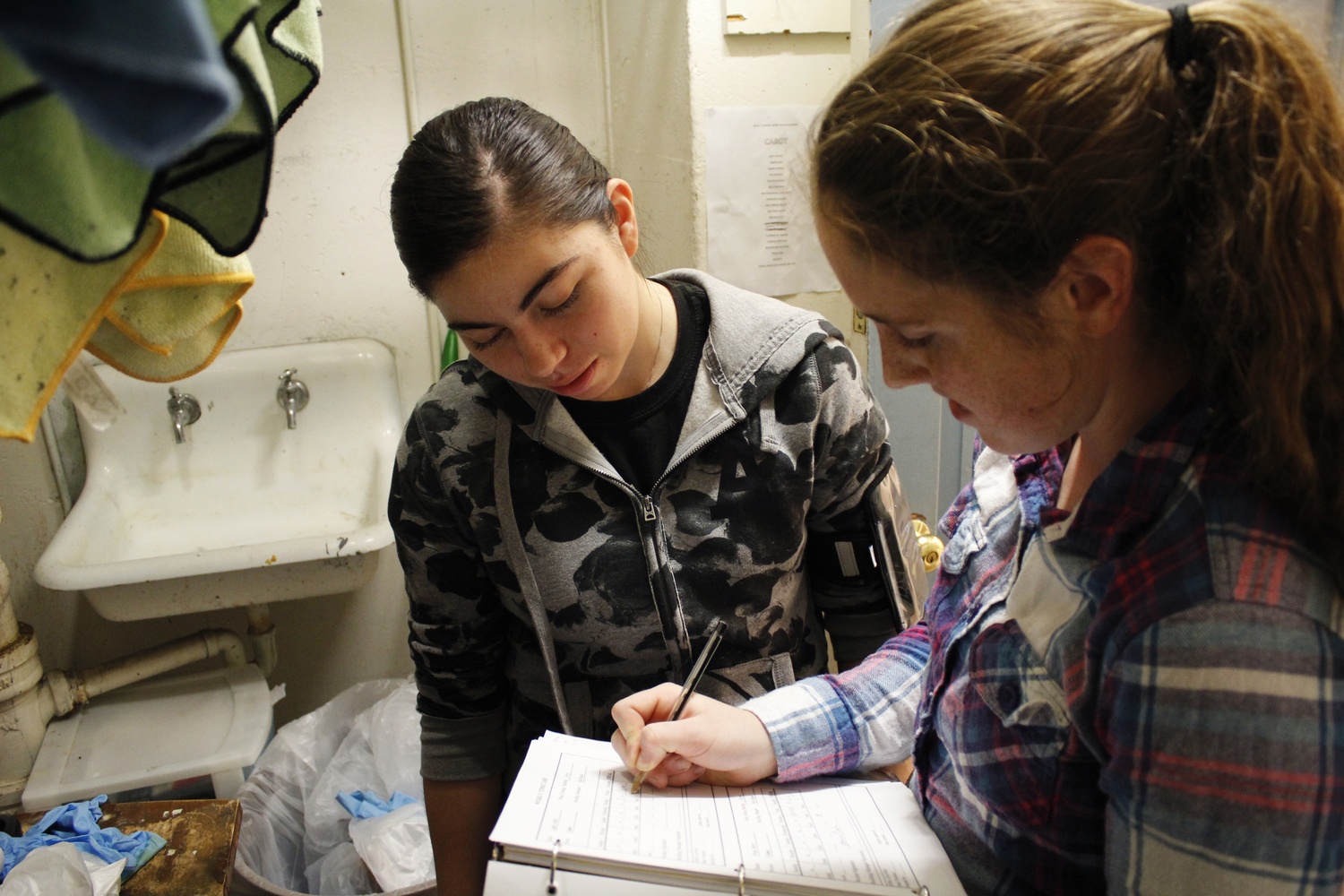 Sarah Lagan ‘19 and Noemi Valdez ‘19 look over a work hour log-in sheet in a Cabot House storage room. The two did Dorm Crew Fall Clean-Up together and continued to work as a team after finding that they were good partners. By Isabel G. Alexander
By Claire E. Parker, Contributing Writer

The muffled sounds of chatter and whirring coffee machines permeate the back room of Cafe Gato Rojo, where Shelby J. Martinez ’18 is sitting after finishing a two-hour shift at one of her three term-time jobs. She works a total of 10 to 15 hours a week at the Cafe, Eliot Grille, and Harvard Student Agencies.

Martinez, a Texas native who qualifies for the federal work study program, said she relies on her jobs to support herself, including to pay for books, pricey flights home, medical fees, and the many other small expenses that add up quickly. She often picks up shifts on Friday and Saturday nights that no one else wants, since she needs the money.

Her need to work, Martinez has found, has affected her Harvard experience significantly.

Camila Victoriano ’16, meanwhile, described her on-campus work experience as a stress reliever that takes her mind off of academics and the intensity of Harvard life. For six to eight hours a week since her freshman year, Victoriano has stood behind Lamont Library’s circulation desk, her hands moving methodically, opening each book, stamping it firmly, then closing it in a steady rhythm.

The contrast between Martinez’s and Victoriano’s stories highlight not only the variation in work experiences on Harvard’s campus, but also the different opinions that surround the term-time work expectation that is a long-standing component of Harvard financial aid. While some students find it a meaningful distraction and opportunity for learning, others describe it as a major burden that puts them at a disadvantage.

The expectation that students work during term-time is a central part of Harvard’s financial aid package—more than 70 percent of undergraduates have jobs, according to estimates by the Student Employment Office.

“We’ve always had it. We believe that students should invest in their own education,” said Sally C. Donahue, the College’s financial aid director. “Many of our donors were receiving financial aid themselves when they were in school, and many of them firmly believe that students benefit from having jobs on campus and from investing in their own education, and being part of this partnership that enables them to be here at Harvard.”

Still, although the term-time work expectation is far from new, it has evolved over the past few decades so that it has decreased in size substantially, according to Donahue.

Prior to 1998, Harvard expected students who received financial aid to work more hours than it does today; the College also asked students to contribute those earnings directly to tuition and fees. But thanks to financial aid reforms over the past two decades, Harvard now offers students significantly more grant aid and cut the term-time work expectation in half from $7,325 in 1998 to $3,375 today, according to Donahue. Tuition, meanwhile, has doubled. 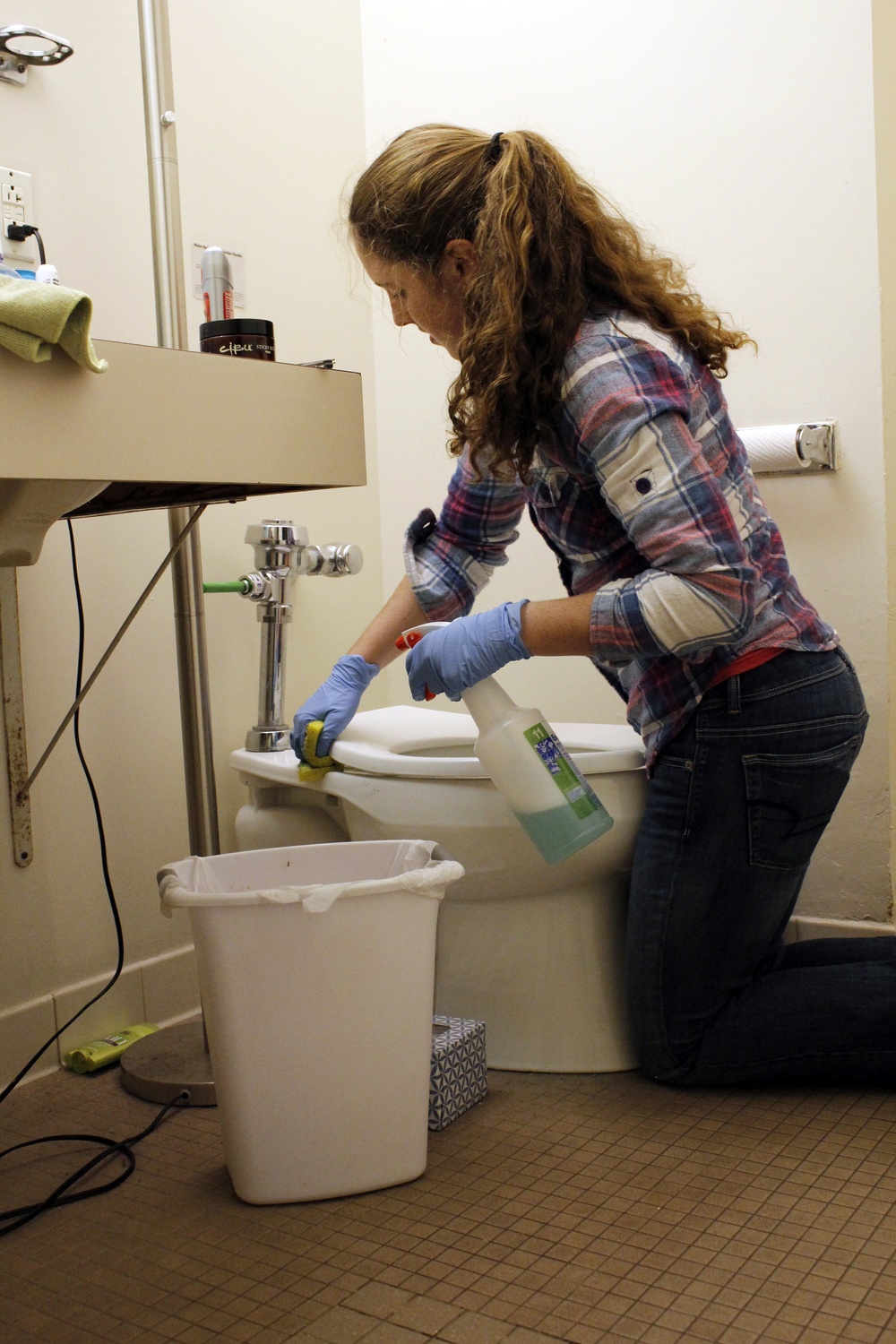 Sarah Lagan ‘19 cleans a toilet in Cabot House as a part of Dorm Crew. By Isabel G. Alexander
Advertisement

“I think a big concern going back in time was that we didn’t want to set up a situation that kept people from having the full experience if they were meeting their term-time work requirement,” Dean of Freshmen Thomas A. Dingman ’67 said.

Now, the College strongly advises students not to work more than 20 hours a week; according to Donahue, it calculates each year’s work expectation based on what students could expect to earn by working 10 to 12 hours.

Also a departure from previous years, Harvard expects students to use their term-time earnings to cover additional educational costs such as books, school supplies, and travel expenses, but not tuition and fees.

While the College’s Financial Aid Office outlines this requirement in student financial aid packages, it does not monitor whether students are actually working to fulfill it. The Student Employment Office, meanwhile, does not keep track of where individual students are working or for how long, but according to their aggregate statistics, 4,160 students on Harvard’s payroll earned a total of almost $9 million in the 2014-2015 academic year.

Dingman argued that the current work expectation fits into what he defines as a “manageable load”: “If you do one or two extracurricular activities, have some term-time employment, have a regular four-course load, keep up in your work outside of the classroom, get some sleep, have some time simply for down-time,” he said, “I think it makes for a full and interesting but manageable week.”

Several students who work fewer than 10 hours per week agree with Dingman, but some who work more than that report a different experience: Their jobs, they say, prevent them from pursuing other activities on campus.

“I do feel that I am limited in terms of what I can actually do outside my employment. I only do one other club because I felt that that’s all I could take on,” said Devontae A. B. Freeland ’19, who works 10 to 15 hours a week total as a “Hahvahd” tour guide, an intern at the Harvard Foundation for Intercultural and Race Relations, and an employee at the David Rockefeller Center for Latin American Studies.

Students whose jobs align with their interests and ambitions find that working long hours is not a problem. Joao H. Vogel ’16, who said he prioritizes extracurricular commitments over academics, has found his jobs rewarding. Jarrod R. Wetzel-Brown ’17 described his jobs at the Center for Wellness and as a Peer Advising Fellow as extracurricular activities that just happen to be paid. And a select few extracurriculars on campus, including The Crimson, offer financial aid programs that pay participants with demonstrated need so they are not forced to face a difficult trade-off.

But for Martinez and students like her, unable to find such jobs but needing to fulfill their work expectations and support themselves, work means forgoing more time-intensive extracurricular activities and social opportunities that interest them.

Martinez said she would “love” to participate in club sports, investment organizations, or groups that require going through a long comp process. But her time spent working takes up the time she might spend on those activities.

“To me, it’s like the comp process for a lot of these organizations would be like another job, and because I already have one, I can’t add more to my plate,” she said. “When it comes to having extracurriculars and connections, which could make me either academically or professionally or socially better in the long run, versus having a job that I need to have to be able to pay for things right now in the present, I have to choose the job. So it’s a very long-term sacrifice so I can stay here in the present.” 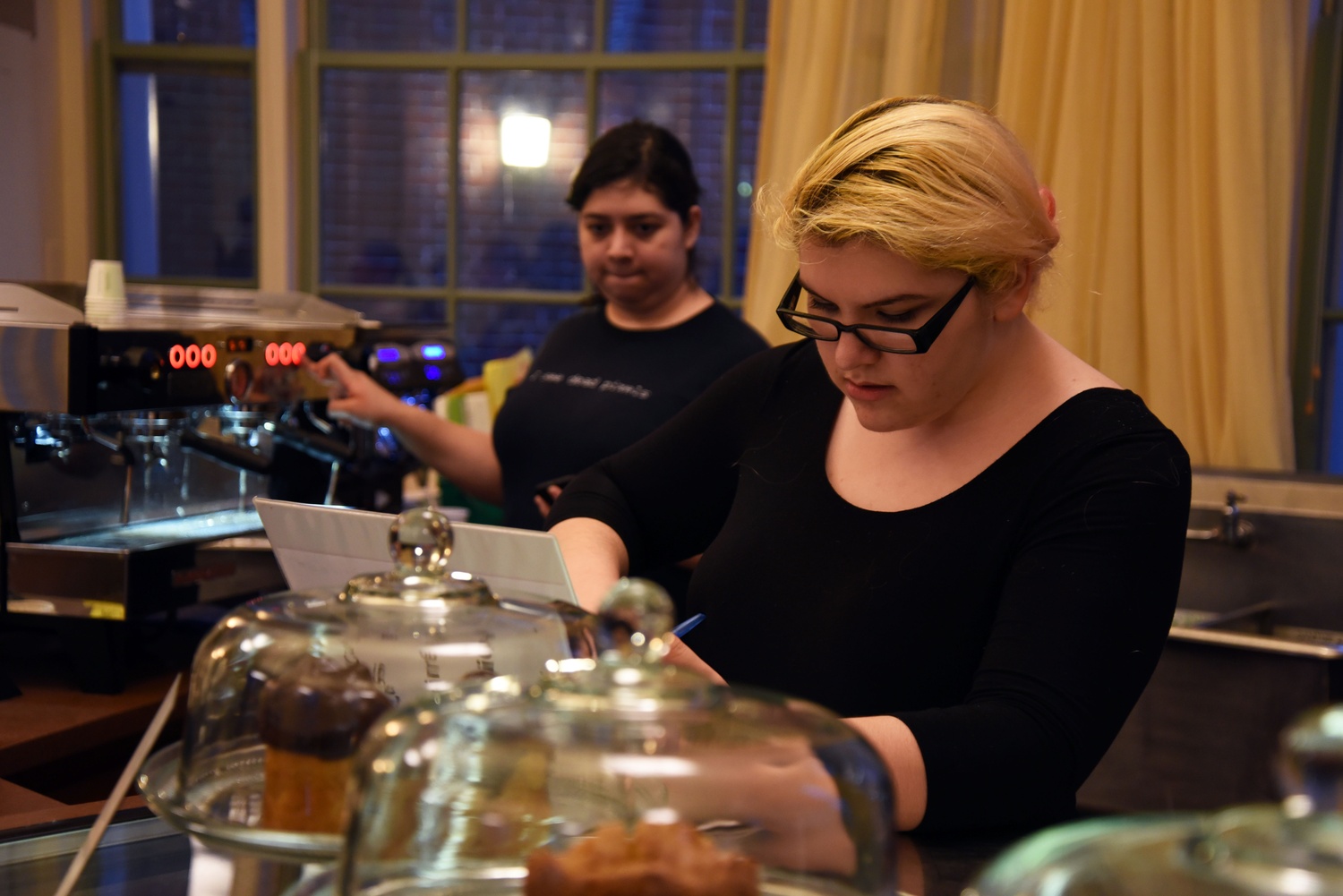 Gabby D. Aguirre '17 prepares for her shift at the Barker Center's Arts Cafe on Wednesday afternoon. By Michelle M. Ng

Gabby D. Aguirre ’17 works 20 to 30 hours a week at her three campus jobs to send money home to her family in times of economic hardship. That comes at the expense of her personal life, she says, adding that her situation is not unique: “A lot of people I work with are people who are on work study and who are working 20 to 30 hours a week,” she said. “A lot of us are kind of aware in terms of how it limits us in terms of social and academic opportunities.”

Given the impact of long work hours on a college schedule, some students question whether Harvard’s term-time work expectation should exist at all. Some students argue that grant aid should expand to cover and eliminate the student work contribution altogether.

“I can say that the term-time work expectation in my case didn’t immediately feel ideal,” Freeland said. “My parents were talking about taking on extra hours to support that, and I didn’t want to force them to do that. It’s an added burden on students.”

Some students who work long hours say needing to work disadvantages them academically compared to their non-working classmates. Freeland said working three jobs during the day means that he cannot start studying until late at night; Aguirre described having much less time to devote to papers and problem sets and recalled seeing other students with the time and flexibility to attend last-minute study sessions or office hours performing better on assignments.

Martinez, who said she thinks the College should increase scholarships to eliminate its term-time work expectation, perceives dramatic disadvantages stemming from disparities in networks. Students who do not have to work term-time jobs have extra time to foster social and professional networks that working students lack, she said.

“A lot of your success in college and after you graduate depends on your connections and the people you know, more than it really is your aptitude,” she said.

Still, administrators maintain that the work expectation is an important part of its financial aid program: “I think Harvard has been a leader in enhancing its financial aid program to the point where we have ensured that Harvard is affordable for every student and family we admit. Could we go beyond this and eliminate jobs? There are always questions about that,” Donahue said. “We think jobs are important and we think a student contribution is important. Particularly if a student is receiving a very large grant of, say, $55,000 a year, to contribute a couple thousand out of earnings is really not an unreasonable expectation.”

Charlene S. Kim, the assistant director of financial aid for student employment, said College staff and alumni donors also feel that working provides students with valuable real-world experience, imparting professional development that will serve them in their careers. “It is supposed to be a part of the educational experience ultimately,” she said.

Students, too, all seemed to agree that their term-time jobs have taught them time-management and organizational skills they could not have learned in a classroom. Dorm Crew head captain Laura K. Brennan ’16 said dorm crew has easily been her most formative experience at Harvard, and she will use the organizational skills she acquired from it in her teaching career. And Adam R. Hotchkiss ’15-’16 said his management position at the Queen’s Head has taught him how to run a business.

Noemi Valdez ’19, a dorm crew worker, is also glad that the work expectation exists. “I don't like things being handed to me,” she said. “Working allows me to feel that I am also doing my part.”

The problem, Aguirre argued, is that wealthier students are exempted from this experience. Referencing an op-ed about why the wealthy should clean toilets, she proposed a more radical solution to even out the playing field.