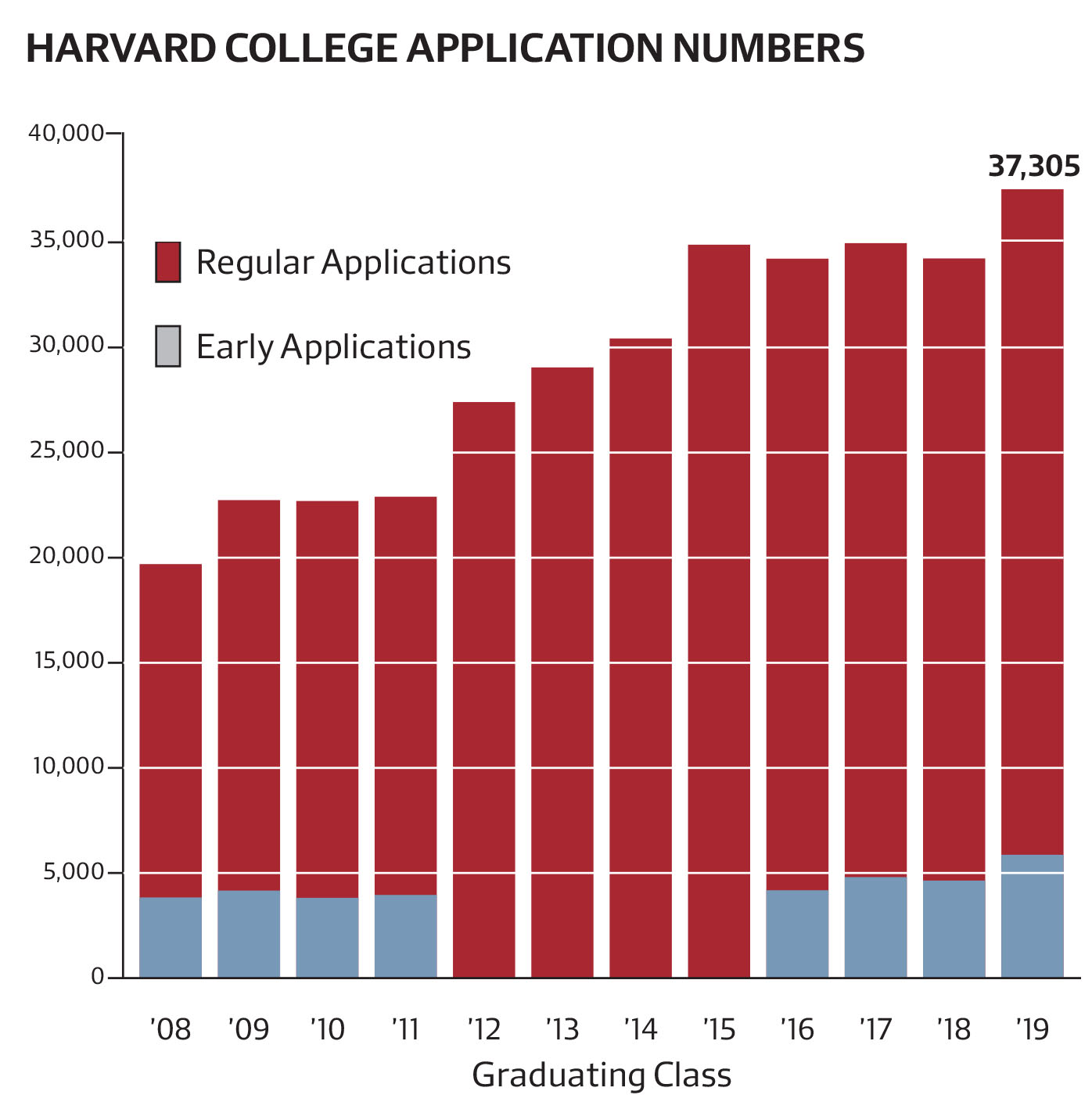 Harvard College received an all-time high of 37,305 applications for admission to the Class of 2019, an increase of 3,010 applications from last year.

A record 37,305 people applied for admission to Harvard College's Class of 2019. By Jake Freyer

Dean of Admissions and Financial Aid William R. Fitzsimmons ’67 speculated that the Admissions Office’s use of a new low-income student outreach program called Harvard College Connection and last year’s news that Kenneth C. Griffin ’89 donated at least $125 million in support of undergraduate financial aid may have contributed to the 8.8 percent increase in applications for early and regular admission.

“I think that when Ken Griffin’s gift came, the timing was perfect and lots of things came together,” Fitzsimmons said in an interview Thursday. “It allowed us to once again reinforce that if you’re someone of excellence, we’re open to you.”

Fitzsimmons added that the College saw an 11.7 percent increase in the number of prospective students considering studying the arts and humanities. He cited the recent opening of the renovated Harvard Art Museums and the recent proposal of a “Theater, Dance, and Media” concentration as catalysts for interest.

According to Fitzsimmons, 18.4 percent of applicants are international citizens.

The Admissions Office saw the largest jump in applications from the Midwest and Mountain regions this year, posting 13.6 and 16.1 percent increases, respectively, Fitzsimmons said. While crediting the growth to expanded recruiting efforts in rural areas, Fitzsimmons said that the number of applicants from underrepresented regions was still relatively small.

“In every one of these geographic areas, they’re almost identical to last year,” he said. “I could try to puff it up and say there’s a 16.1 percent [increase this year] versus an 8.1 percent change in Mountain states [last year], but that’s from 1,277 to 1,483 applicants. It’s not a big jump.”

Despite the record-high number of applications, Fitzsimmons said the Admissions Office is more concerned about the quality, rather than quantity, of its prospective students.

“It isn’t about your yield rate and it isn’t about your admit rate; it’s all about the excellence and the character,” he said. “It’s about how terrific are the people you’ve admitted this year in terms of educating one another, inspiring each other and faculty members.”

The College has already accepted 977 students to the Class of 2019 from an early applicant pool of 5,919 people under its restrictive early action program, marking the program’s lowest acceptance rate—16.5 percent—since it was reinstated in 2011.

The Crimson was granted early access to application figures and an interview with Fitzsimmons under the condition that it not publish its story until Friday morning. Anna Cowenhoven, a spokesperson for the Faculty of Arts and Sciences, sat in on the interview.