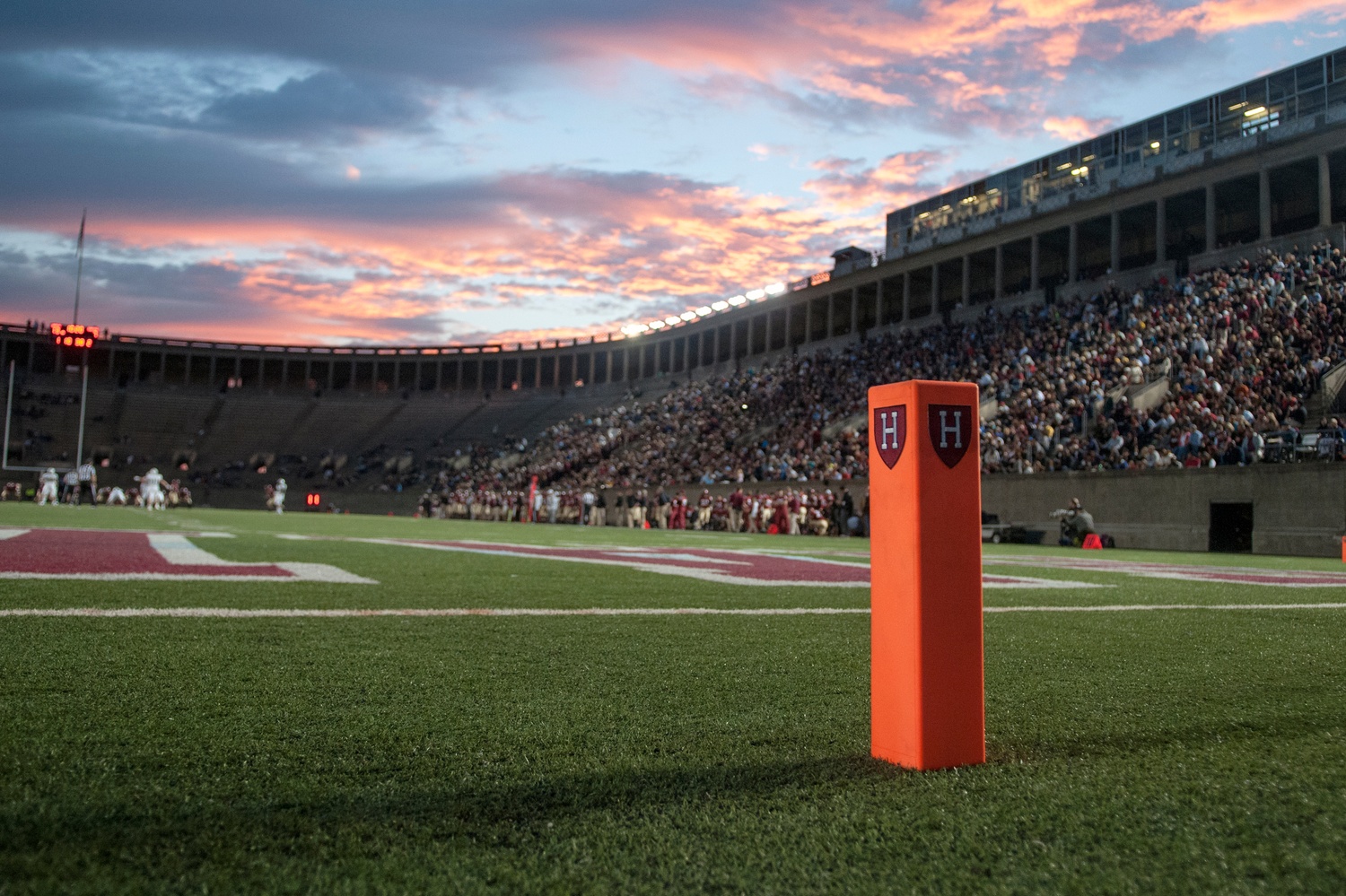 For Luke Morgan-Scott ’18, a 5:50 a.m. alarm makes winter days stretch longer than most. By sunrise, Morgan-Scott, the only freshman to walk on to the varsity men’s swimming and diving team this year, hits the water at Blodgett Pool. But it’s only his first practice of the day.

The expansion of practice hours into team meals and down time is a work week ritual familiar to many athletes at Harvard. And at just over four months, the swimming and diving team’s season is one of the longest in the school’s Division I program, which includes 42 varsity sports teams.

Morgan-Scott knew this when he decided midway through high school that he wanted swim in college. “It was the first time I’d truly dedicated myself to a sport,” he said later. Months of practice, weekend meets, and team-filled days since, the swim team is “the biggest part of my life here,” he said.

He is not alone in recognizing that walking on to a varsity team changes life at Harvard. The choice to walk on to a Harvard sports team has major social and academic implications that non-recruited students might not anticipate before they join, influencing the make-up of their social circles and their course schedules. Those factors often combine to define walk-on athletes’ time in college in a way they did not originally plan.

The Hours Add Up

In the most tangible of ways, the structural limitations on walk-on athletes are no different than those of any student who was recruited to play a varsity sport at Harvard. They share demanding practice schedules, trips to and from away games, and obligations to comply with NCAA regulations.

Yet the contrast freshman walk-ons find between Opening Days and life on a roster offers a unique lens through which to view the scheduling demands of varsity sports. It’s uncommon for students who were not formally recruited to walk on to a varsity sports team at Harvard, especially on major sports such as football and basketball. Out of 117 members of the varsity football team, only 2 walked on last fall, according to Tim Williamson, the director of communications at the Athletic Department.

“All of a sudden, if you make it, you have 3 hours of practice a day,” recalled Brown, who now serves as the director of baseball operations for the Athletic Department. “That’s if you draw it up on a calendar.”

But practices for most team sports tend to pile up—take the dual-practice schedule of the swimming and diving teams—so, as Brown added, “it’s very easy to get lunch with teammates on the way to practice, and have dinner on the way back. The time extends to half of your day.”

“And for walk-ons, you’re not always anticipating that,” he added.

To walk-ons who arrive at Harvard with a range of academic and extracurricular priorities beyond athletics, the adjustment may be more jarring than that for recruited athletes, some walk-ons say.

“It’s a really big difference,” said Lucy E. Rogers ’18, now on the women’s varsity heavyweight crew team. “I think a large part of it is that I didn’t come to college expecting to be an athlete, or expecting to row, and so I had this vision in my head of what I expected college to be like and didn’t expect to include athletics in it.”

Rogers, who may study Earth and Planetary Sciences or Statistics, also had a formidable schedule to contend with.

“It’s a little challenging because it’s everything that I wanted, plus four hours of athletics a day,” she said.

Rogers is not alone in sensing the structural impediments joining a team impose on that “vision” for a varied college schedule. Often, according to some College administrators, students must choose between sacrificing their other interests or committing to their team. But walk-ons often have had the chance to explore other facets of college prior to increasing their athletic commitments, perhaps more so than their recruited peers.

As Dean of Freshmen Thomas A. Dingman ’67 said, “It might be that [walk-ons] didn’t step up as early in the process. Some of those folks may not have made the same sort of commitment early on and,” for example, “have found themselves able to have a wider network of friends.”

That network, however, often has trouble weathering the storm of team-filled days on end. Brandon N. Wachs ’18, a standout prospect from San Diego who never doubted his intention to play college baseball but was not a formal recruit, was more surprised by the social limitations created by joining Harvard’s baseball team than by any changes to his schedule. Walking on to a team, for many students, means socializing primarily with other athletes.

“I think it limits you from meeting other people that you would meet when you’re part of clubs or the paper or other things that you can do on campus,” Wachs said. “With sports, it really limits you to one extracurricular.”

Reasons both structural and cultural contribute to this limitation. For Wachs and baseball, for instance, near-weekly team mixers changed the color of his fall social experience. According to Wachs, between mixers, practice, and traveling with his teammates, he spends much of his time with the same group of student-athletes. “There’s a little bit of exclusiveness,” he said.

“In the most positive way you can say the word,” added Morgan-Scott about the swimming and diving team’s atmosphere, “it’s like a cult.”

Indeed, for Wachs and Morgan-Scott, their participation in a varsity athletic team offers them a unique and nearly constant source of friendships and social activity. After freshman orientation, Morgan-Scott said, “nightlife turned into team parties.” He and his teammates planned social events within the athlete community, such as mixers with other sports teams.

“You always had a group of friends that were pre-designated to be your friends and people to be very close to,” Morgan-Scott said.

To Wachs, it would be difficult to “match the camaraderie with teammates outside of sports.”

“I don’t know what you would do to duplicate that,” Wachs said. “That’s a big upside to playing a sport.”

Yet as Wachs and others note, the underside of camaraderie can be social limitation. Students say that walking on can prevent students from making friends outside of their team. Team members arrange regular meals together, and often meet up after practice hours to do schoolwork, sometimes leaving little time to branch out.

To Dingman, this sometimes translates into athletes participating less in residential life. “We see it in the Yard. We see athletes exempting themselves from study breaks, just not being full participants,” he said. “I think they miss out on some of the rich diversity of the place.”

“It just has to do with the fact that you are putting so much time into [your team], and a lot of [teammates] aren’t branching out,” Morgan-Scott said. “Those who are more introverted—for whom it’s harder to go out, or [who] have gotten so close to people on the team and forgot to branch out at the very beginning—realize that once [they] start leaving [the social circle], they don’t have anyone else.”

Still, some teams are not as constant of a source of social commitment. As a freshman fall walk-on to the women’s heavyweight crew team, Mary M. Carmack ’16 noticed that her social experience did not drastically change after she walked on. Crew team members have diverse interests outside rowing, according to Carmack, “and so for better or for worse, it means that it’s not necessarily your whole social life.”

The fact that walk-on athletes start out at Harvard without the same level of athletic commitment also helps them maintain a social life outside of their team, more so than recruits, said Wachs, who said he has friends outside the baseball team.

“I think that walking on helped me have more connections outside of sports,” Wachs said. “I kind of like that, because in high school I’ve always loved baseball, but I’ve never been like, ‘I’m just a baseball person.’”

Joining a varsity sports team also creates academic hurdles to which walk-ons, unlike their recruited peers, did not commit prior to coming to Harvard. While administrators have discussed changes that might make schedules more flexible, classes that meet in certain time windows—particularly in the afternoon—conflict with team practice schedules and thus pose challenges for students devoted to a varsity sport.

Dingman, for his part, expressed concern about this potential academic pitfall for athletes, noting that freshman seminars in the afternoons, in particularly, can be “hard” for freshman athletes to take.

Beyond purely structural limitations, Dingman poses another worry: He has observed that some freshman athletes—including walk-ons—choose their courses based on suggestions from their teammates rather than due to genuine interest in the subject.

“Sometimes the upperclassmen, thinking they’ll be helpful, suggest courses where they had the experience of being able to cut corners and felt that the load was lighter,” he said. “But that’s not particularly helpful [to their teammates].”

Still, some walk-on athletes say they have not encountered serious issues balancing the academic rigors of Harvard with their athletic schedules. It just requires more planning than it would have had they not chosen to walk on to a varsity team.

For Brown—who upon graduation traveled on a Michael C. Rockefeller Fellowship, which he helps administer at Harvard today—it was simple. “I loved school,” said Brown, who was also a finalist for the Rhodes Scholarship. “That was the reason I was here.”

Brown said his team had structural regulations in place—including team rules against meetings during shopping period and a ban on practices at certain hours during common class meeting times—to allow athletes more latitude for academic exploration.

Today, walk-on athletes on campus navigate such regulations to balance academics and their team, an effort that sets them apart from their non-varsity peers.

“Athletics makes you a workhorse academically,” Morgan-Scott said. “Academically, during the year you don’t notice it, but you don’t have nearly as much time as the people around you. You’ll leave practice, go to eat, work until you sleep. Crank it out, do what you need to do.”

Despite efforts to balance social and academic changes—however they may vary between individuals and teams—student-athletes walking on to a varsity sport necessarily make a team a large priority.

This choice does not bear lightly upon the fabric of Harvard residential communities that, according to the Harvard Athletic Department website, are composed of nearly 20% varsity athletes. But ultimately, as Brown puts it, walking on is an individual choice with individual social and academic consequences attached.