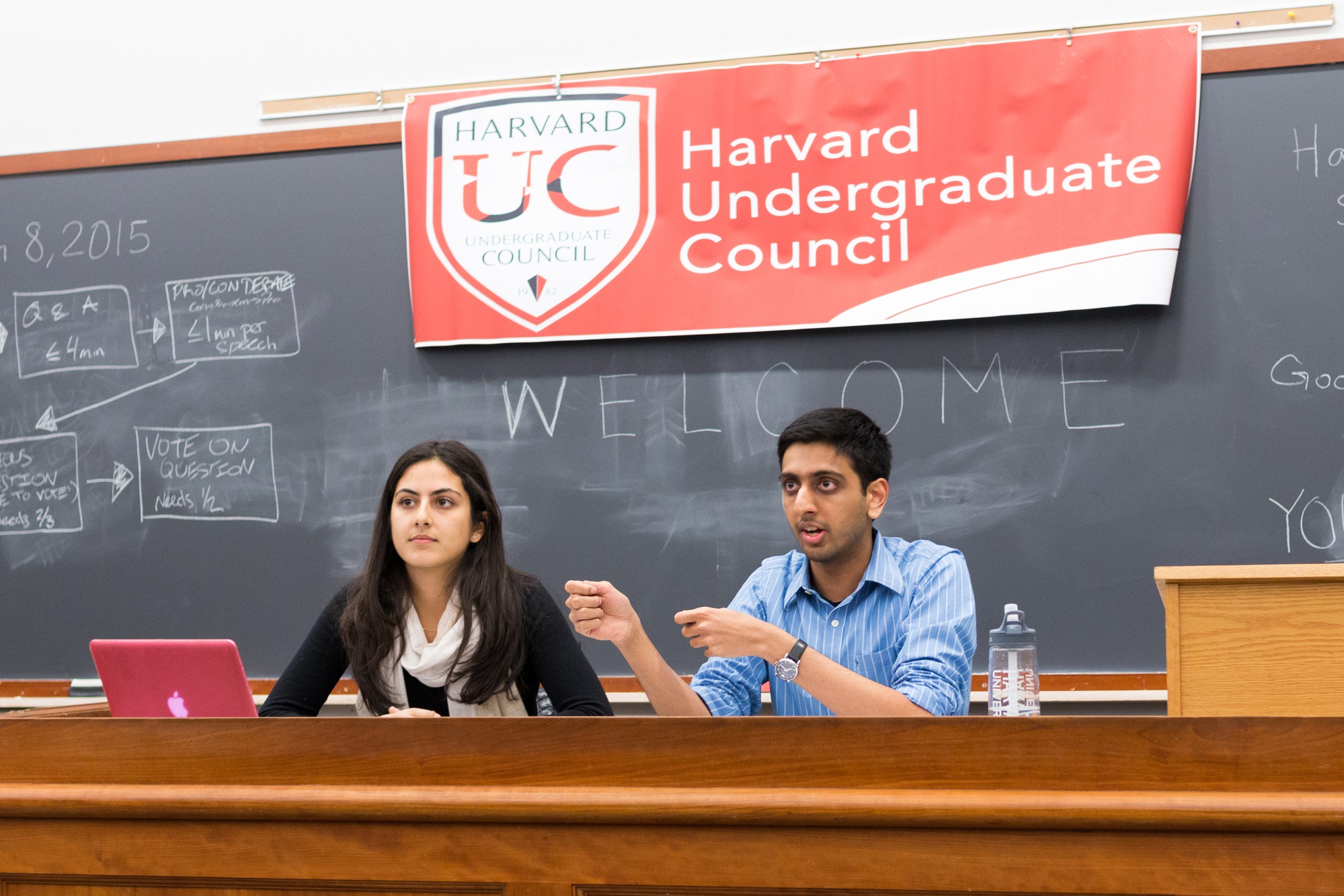 Presiding over the Undergraduate Council general meeting Sunday evening in Harvard Hall with UC President Ava Nasrollahzadeh '16, UC Vice President Dhruv P. Goyal '16 clarifies a statement he made to The Crimson in response to the Spee Club's apology for circulating a controversial party invitation. Goyal retracted the words “on behalf of the Council” from his statement.
By Jalin P. Cunningham, Crimson Staff Writer

The Undergraduate Council voted down a proposed position paper that was sharply critical of Harvard’s all-male, unrecognized final clubs on Sunday night. The proposal was particularly critical of the Spee Club, which apologized last week for circulating a controversial party invitation that many people—including Dean of the College Rakesh Khurana—called sexist.

The meeting ran 30 minutes longer than originally scheduled—at least in part because of a lengthy debate about parliamentary procedure—and came after controversy erupted over invitations to the Spee’s planned “pajama party.” The emailed invitations included an image of a drawing depicting a bear with its arm around a woman dressed in tights and a sleeveless top and linked to a video that showed multiple clips of women wearing underwear and male and female models walking a runway.

The Spee ultimately canceled the party, which had been scheduled for Saturday night, and apologized “for a genuine lapse in judgement.” 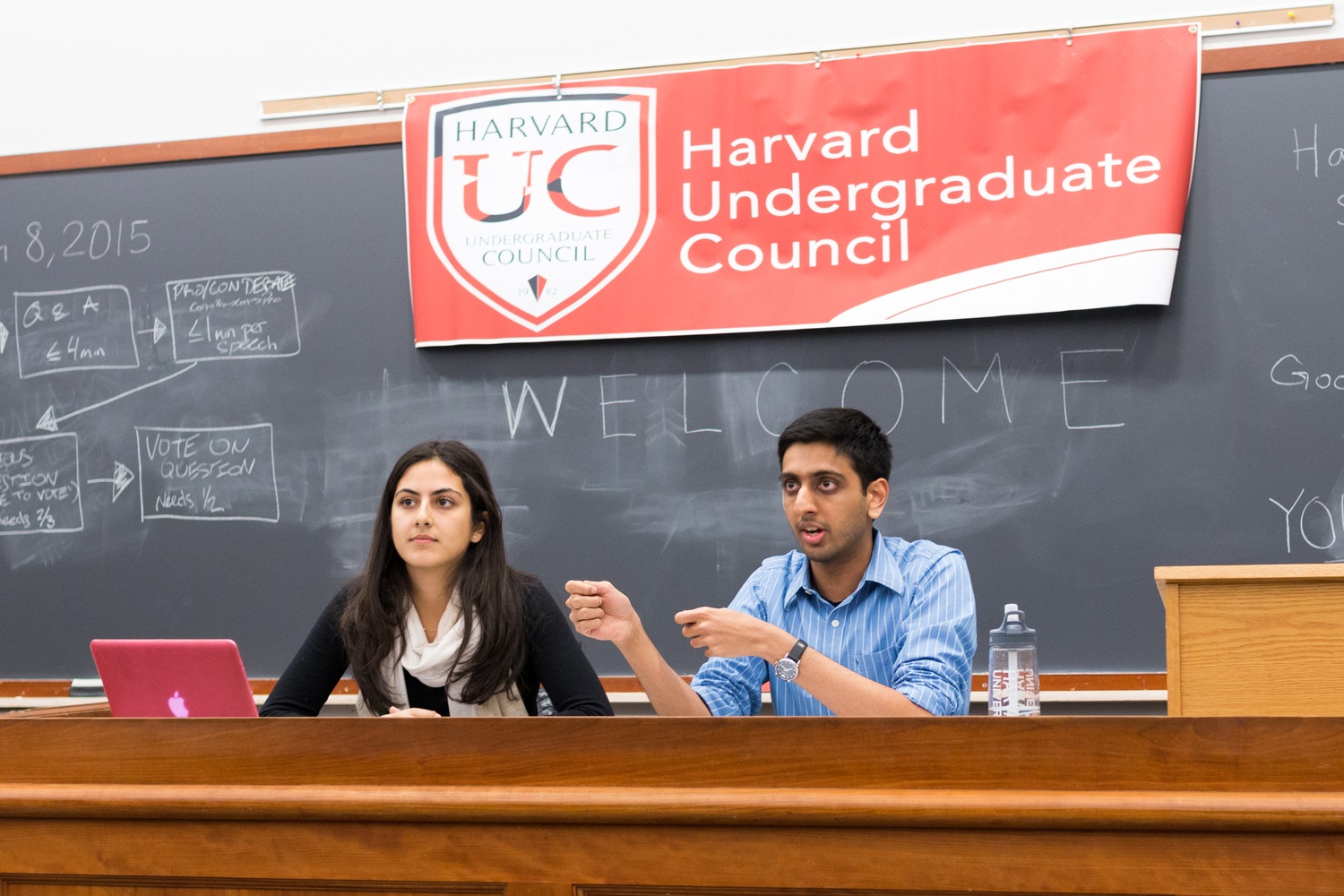 Presiding over the Undergraduate Council general meeting Sunday evening in Harvard Hall with UC President Ava Nasrollahzadeh '16, UC Vice President Dhruv P. Goyal '16 clarifies a statement he made to The Crimson in response to the Spee Club's apology for circulating a controversial party invitation. Goyal retracted the words “on behalf of the Council” from his statement. By George J Lok

The proposed position paper, which was attached to legislation that failed to pass the Council with 24 votes against and seven in support, denounced both the Spee and Harvard’s other male final clubs. Winthrop House representative Daniel R. Levine ’17, who is a Crimson news editor, was the sole author of the paper and the chief advocate of the legislation.

“Whether or not it is the reality, many students view final clubs as a thinly-veiled mechanism for elite, male students to exploit power dynamics and get laid,” Levine wrote in the paper. “We are told that final clubs host wild parties full [of] attractive, half-clothed women…. We are told that freshmen and girls from other schools are targeted because they are seen as more naive. We are told that alcohol is used to expedite consent. We are told these things, and they are not difficult to believe.”

During a question-and-answer period, Levine clarified that his position paper referred only to all-male final clubs.

Some members of the Council who voted against the legislation said they thought the paper was too strongly worded against the clubs or argued that it did not propose enough “tangible” courses of action to prevent acts of discrimination from occurring in the future.

Council Parliamentarian and Cabot House representative Jacob R. Steinberg-Otter ’16 argued that the Council should wait until it has further conversations with the Spee before considering publishing the paper.

Other Council members said they feared the legislation might hinder subsequent efforts to engage in dialogue with final club leadership on the issues raised.

“It is not going to get done with a piece of paper. [If the legislation passes] we are going to exclude [final clubs] from the conversation, when they have the power to make the most change,” Dunster House representative Daniel V. Banks ’17 said.

UC President Ava Nasrollahzadeh ’16 was one of the 24 votes against the legislation. She said after the meeting that she opposed the paper’s description of “attractive, half-clothed women” as the majority of attendees at final club parties, an objection raised by at least one other Council member during the meeting.

“[Our goal] is to make productive steps forward,” Nasrollahzadeh said at the meeting. “As leaders on campus, it’s our responsibility to show them how to move forward, rather than to just say again that we don’t approve of this.”

“I don’t see anywhere, in this piece of legislation, action items,” she added.

During a public question-and-answer period in the final minutes of the meeting, Nasrollahzadeh declined to confirm to a Crimson reporter that she is a member of the Bee, an all-female final club.

Nasrollahzadeh later confirmed that she is a member of the Bee Club.

The meeting's proceedings were at times dominated by members' discussion of parliamentary procedure, the set of rules that govern how the Council debates and votes on legislation. Throughout the meeting, UC Vice President Dhruv P. Goyal ’16 deferred frequently to Steinberg-Otter, the parliamentarian, even as multiple members expressed their frustration with the rules.

The meeting ended with members creating a list of “action items” to deliver to final clubs, including asking for pledges for the UC’s "Side By Side" gender equity campaign, hosting a town hall forum with final club leadership, and contacting alumni boards responsible for funding the clubs.

Earlier in the meeting, the Council unanimously approved $51,000 in funding for club sports teams. The meeting was held in Harvard Hall instead of in Ticknor Lounge, where the Council usually convenes.