Harvard will use bake sale money to print brochures 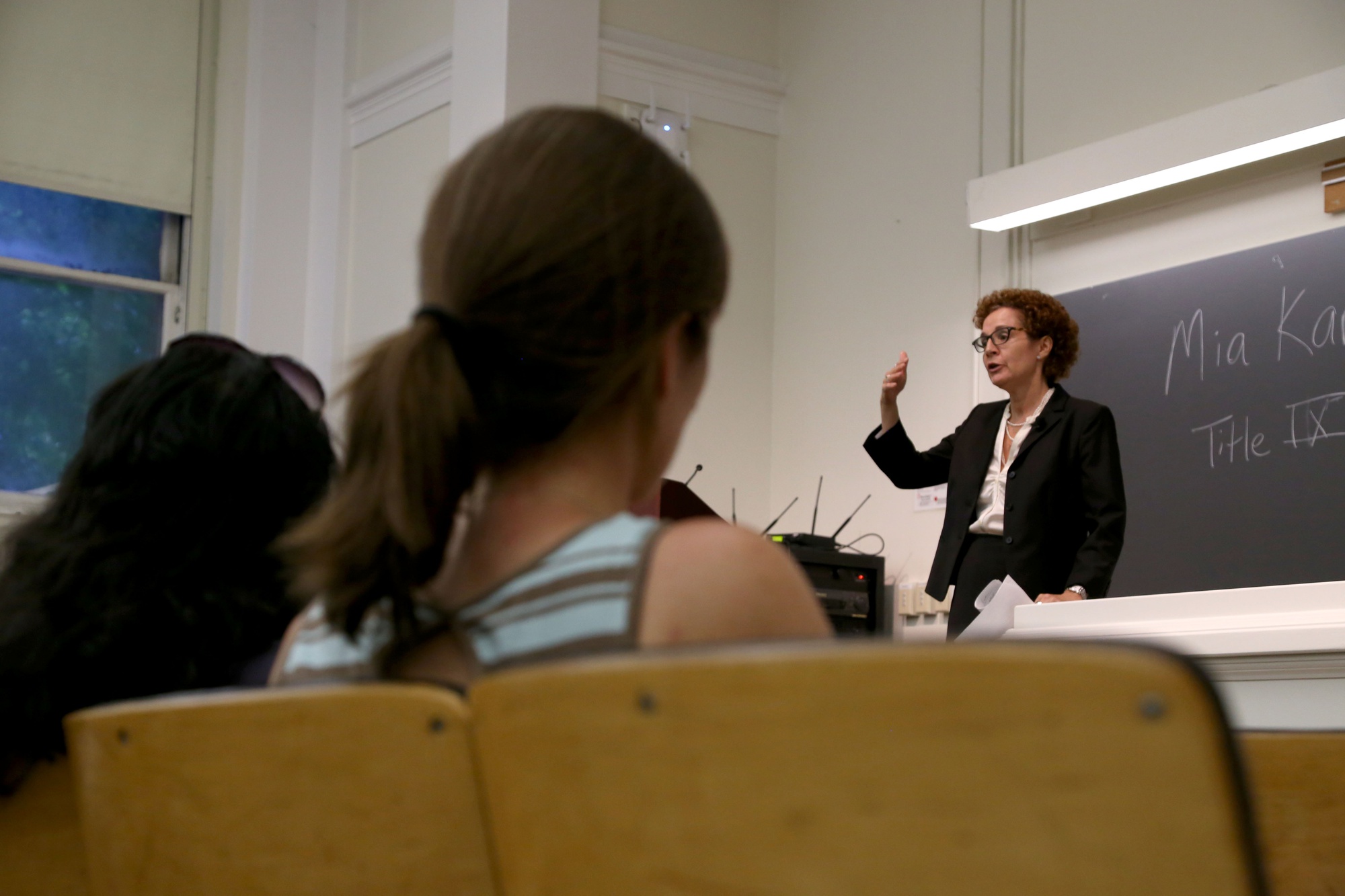 Members of the Harvard community watch as Mia Karvonides, Harvard's Title IX officer, speaks about the University's new sexual harassment policy and procedure in September. The community discussion, held in Emerson Hall, was the first in a series of meetings on sexual harassment policy open to the Harvard community.
By Noah J. Delwiche, Crimson Staff Writer

Harvard has not yet fully staffed the centralized office that is in charge of investigating reports of sexual harassment, more than nine months after administrators announced its creation.

When administrators unveiled Harvard's new Title IX policy last summer, they lauded the creation of the central Office for Sexual and Gender-Based Dispute Resolution, whose professional investigators would hear complaints filed against students from across the University and bring Harvard’s approach to the issue into consistency across schools.

But several weeks after the office opened, Harvard had yet to hire two of its three full time investigator positions and began bringing in contract help. In an email Thursday, University spokesperson Tania deLuzuriaga confirmed that ODR has still not filled the two investigator position vacancies.

The office has, however, determined the fate of a donation from student activist group Our Harvard Can Do Better, raised by the group through a satirical bake sale meant to draw attention to what organizers argued was a lack of institutional support for the office. In September, Harvard was offering a salary range for the position that some experts argued was too low.

Pitched outside Lamont Library with chai spiced snickerdoodle cookies last December, undergraduates packed over $100 in donations into a glass jar, unsure how the Title IX office would allocate the funds even if it were to accept the money.

As it turns out, Harvard has taken them up on the offer. Earlier this month, Our Harvard Can Do Better posted a verification receipt of $163 in donations to the recording secretary’s office on the group’s Facebook page.

Proceeds from the bake sale will go toward printing new brochures on Harvard’s sexual harassment policy and procedures, according to deLuzuriaga. 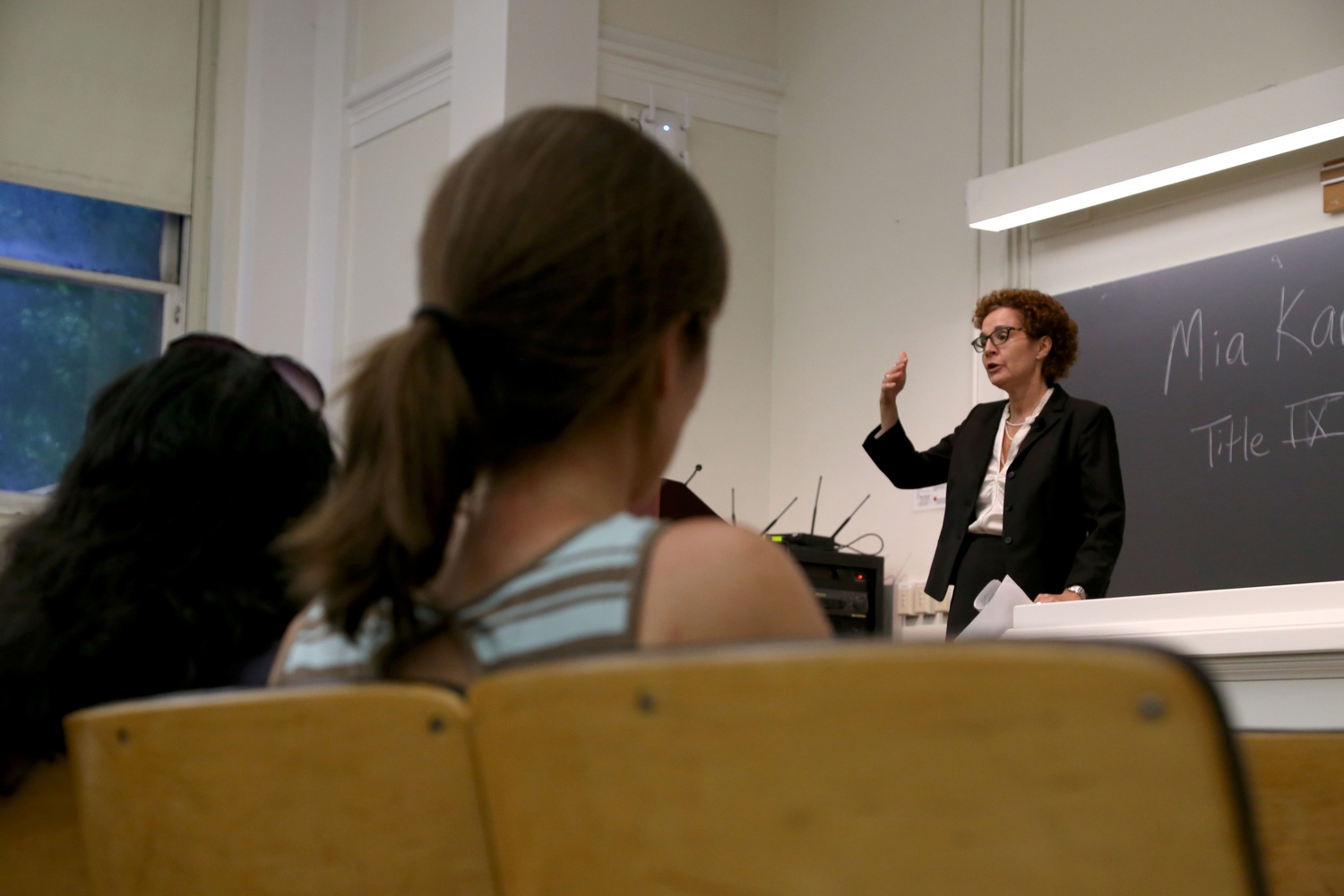 The brochure, which the Title IX office published online earlier this semester, comes after Our Harvard Can Do Better called for additional clarity in the University’s Title IX policy and procedures and the release of secondary materials explaining it. Some students have specifically criticized the new policy for its lack of an explicit affirmative consent clause.

The brochure lists sexual harassment resources and features answers to questions about sexual violence and consent. The brochure also includes clarifications about the University’s definition of consent, stipulating that the “the absence of a ‘no’ does not by itself mean ‘yes’” and that welcomeness cannot be “inferred” from an individual’s clothing, gender, race, or sexual identity.

Karvonides wrote in an email late last month that she would be meeting with various student groups and offices to solicit feedback and finalize the brochure.

Members of Our Harvard Can Do Better praised the brochure for its clear language, but argued that Harvard should expedite the release of additional supplementary materials and ensure that they are accessible to all students.

“We need more materials that are in the rhetoric and language and accessibility level as the brochure,” Emily M. Fox-Penner ’17 said.

Organizers added that the “central issues” that prompted them to host the bake sale in December still remain, as they await additional supplementary materials and the University to fully staff ODR.

“It’s on Harvard to actually substantively commit to funding this office… and getting it fully operational,”  Fournier said.

The Title IX office also includes two documents on its website designed for Harvard staff: one summarizes the staff procedures and the other provides a glossary of terms those procedures use. Additional materials are “coming soon,” according to the site.