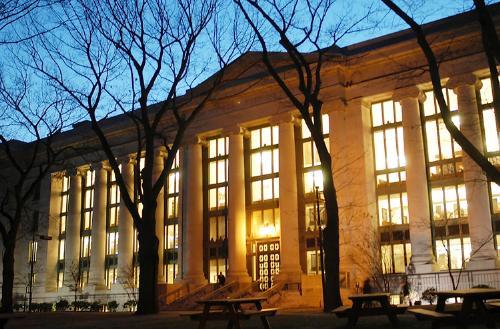 Harvard Law School’s Langdell Library, lit up at night, is the subject of a legal dispute between Richard Max Strahan and the University.
By Andrew M. Duehren, Crimson Staff Writer

As Harvard Law School moves to break from the University’s central approach to handling cases of alleged sexual harassment, Law professors are questioning the relationship between their school and Harvard’s central administration and faculty governance structures more broadly.

Two Law School professors, Charles Fried and Robert H. Mnookin, penned an op-ed last week in the Chronicle of Higher Education criticizing the “cadre of administrators” at Harvard and called for the creation of a faculty senate as a mechanism to ensure faculty participation in major University decisions.

The op-ed cited last year’s creation of Harvard’s first University-wide policy and set of procedures to govern its response to sexual harassment cases, which has drawn fire from Law School professors, as an example of a central decision made without sufficient faculty input.

In an interview this week, Mnookin said he had been thinking about University centralization issues over the past couple of years, but “it’s certain the importance of it was underscored by the process by which both the decisions on Title IX and with regard to our health policies were adapted.”

Fried and Mnookin’s concerns, which come as the Law School implements its own set of school-specific Title IX procedures to break from the centralized framework, are not isolated. Their op-ed, which Mnookin said was circulated among the full Law School faculty, has struck a chord with some other professors who have been discussing University governance concerns in the wake of Harvard’s decision to adopt a central Title IX approach.

“It was the central administration that got us the policies that were the problem,” Law School professor J. Mark Ramseyer said.

In October, 28 Law School professors signed an open letter in the Boston Globe that criticized Harvard’s central Title IX policy and at the same time raised University governance questions. “Harvard undermined and effectively destroyed the individual schools’ traditional authority to decide discipline for their own students” in adopting its new Title IX approach, the professors wrote.

After the letter, Law School Dean Martha L. Minow appointed a committee to create a set of school-specific Title IX procedures. And in November, a group of 20 professors—all of whom had signed the Globe letter—sent a memo to that committee requesting that the Law School bypass Harvard’s central Title IX body, as it soon will.

Now, after challenging Harvard’s central approach on Title IX , some Law School professors are questioning Harvard’s approach to University governance at-large, arguing that the central administration has become too large and that faculty at individual schools lack sufficient voice.

“It needs to be trimmed, ” Ramseyer said of the central administration.

Some professors, including Janet E. Halley and Laurence H. Tribe ’62, said they echo Fried’s and Mnookin’s call for a faculty senate. “I think the health of the institution very clearly calls for the faculties to find some way of collecting their local knowledge into a single place,” said Halley, a signatory of both the Globe letter and November memo.

Still, not all agree that it would be a sufficient solution. Ramseyer, for example, maintains that “the notion that this would get better if we had a faculty senate seemed to me naive.”

Mnookin, for his part, said he hopes that the op-ed spurs more discussion of the issue University-wide so that the Harvard Corporation, University President Drew G. Faust, or Provost Alan M. Garber ’76 appoints a group to “look into it.”

“Our goal was to put this issue on the table for discussion,” Mnookin said.

This is not the first time Harvard professors have raised governance concerns. In 2013, professors in the Faculty of Arts and Sciences similarly questioned the administrative balance of power in the wake of revelations of secret email searches of College resident deans following the Government 1310 cheating scandal.

University President Drew G. Faust—who has described her vision for uniting the University as “One Harvard"—has defended Harvard’s governance structure, noting that individual schools have been involved in major central decisions cited in Fried and Mnookin’s op-ed.