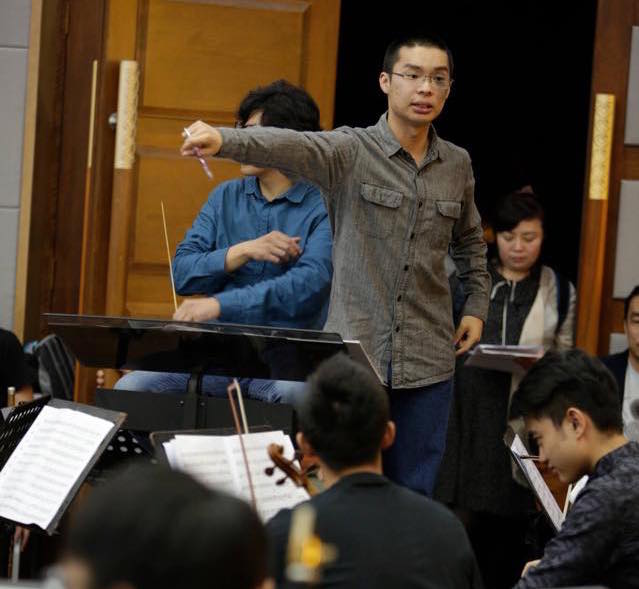 By Courtesy of Sam Wu
By Basia Rosenbaum, Contributing Writer

As a Harvard sophomore, Sam Wu has already made contributions worldwide to music, composition, and conducting. He has arranged pieces for the Melbourne, China National, and Shanghai Symphony Orchestras, among others: at Harvard, he is assistant conductor of the Harvard Radcliffe Orchestra and assistant music director of the Mozart Society Orchestra. In November, Wu premiered the “TEA” suite with the River Charles Ensemble, featuring pianist Cherie Z. Hu ’17.

The Harvard Crimson: How did you get started with music and composing?

Sam Wu: My first real connection with music was when I was seven—I played violin, and soon after I also started piano. But it was more something I did outside of schoolwork.… Middle school…was the turning point because it was the first time I joined an orchestra, and the teamwork aspect of playing with an orchestra and how together you can have so much more fun with music…was so magical for me. A few years later I also started writing music. I saw my music teacher back in middle school using a typesetting program called Sibelius to do arrangements.… I thought it was so magical; it was like a video game to me.… Throughout I became more interested in composing and conducting than [playing] the violin, and at some point I just didn’t have time [for both].

THC: How do you balance music with other commitments at Harvard?

SW: I’m a Music and East Asian Studies joint concentrator. All my extra-curricular commitments are always related to my music and my aspirations to be a professional musician, so in that regard, it’s quite hard to prioritize because everything’s equally important. I actually do have an issue with overcommitment. It’s a learning process for me too, to gauge how much I can really do.

THC: What was it like composing “TEA” for the River Charles Ensemble last November?

SW: It was wonderful. We [had] talked about a piece since last January, so I had a lot of months to have it inside me before I could put it out. I think that piece…really encapsulates my interest in humanities as well as music and also is a musical projection of what I’m interested in academically—of tea being a microcosm of a larger picture of the Silk Road or how ideas, religions, and philosophies travel throughout the Asian mainland.

THC: Who is your greatest inspiration—either in music or in general?

SW: One of my greatest inspirations would be my music mentor, Tan Dun—he composed for “Crouching Tiger, Hidden Dragon.” He’s someone whom I’ve known since my junior year of high school, and we have this wonderful mentorship relationship where I feel very comfortable [seeking] advice from him and engag[ing] in frank and illuminating conversation about anything from conducting to composing.

THC: What are your plans for the future?

SW: I hope to go to grad school for music. In the immediate future, this summer…I will do some research in Hong Kong about the Southern Chinese ritual opera tradition, which I’m really interested in because that’s near where I’m ethnically from. It’s also potentially a project I could really be inspired from to write a senior thesis or some sort of theater ritual opera piece. On April 10 I’m going to Yale to give a premiere of another very interesting collaboration I’ve never done before, which is a piano solo and paint[ing]—like performance art [with] the music…in dialogue with the painting.

THC: What is your greatest piece of advice for aspiring musicians and composers?

SW: Make friends, because friends are…a great source of inspiration—your greatest sounding board. As musicians you can face the challenge [of] being stuck for so many hours in the practice room, or you’re stuck in your own room writing. You can feel somewhat isolated, and I feel like that’s the opposite of how I want to feel. I think it’s being connected with the world around you that allows you to really create work that’s meaningful.