The Founders: The Evolution of edX at Harvard and MIT

While the two schools co-founded the online learning platform three years ago, some say its effect has been greater on MIT’s campus 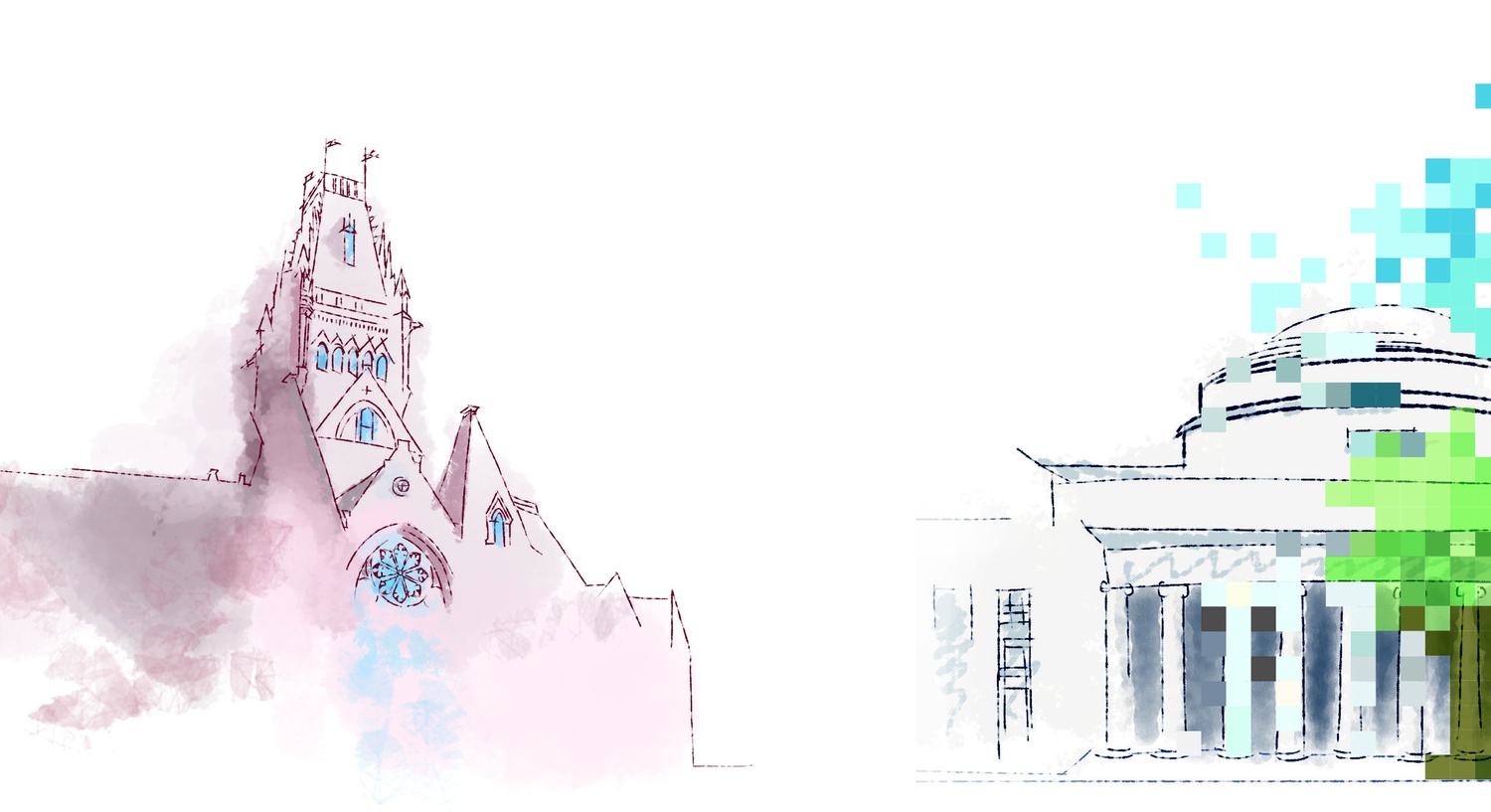 In 2012, Harvard and MIT announced a collaboration that changed the virtual education landscape: edX, an online platform intended to make course material from the two schools available for free to a global audience.

The founders shared a threefold mission—to expand access to education, improve teaching and learning on their campuses and online, and research the effects of their initiatives in order to improve teaching and learning. Today, the platform has partnered with more than 50 colleges and universities but remains governed by its co-founders, Harvard and MIT. But in the years since the schools introduced edX to the world, the platform has manifested itself on the two Cambridge campuses uniquely.

More than 83 percent of undergraduates at MIT have used the school’s Residential MITx system— a learning management system adapted, but separate, from edX—for a “substantial” portion of the work in one or more of their courses, according to MITx’s website and faculty involved in the program. Beyond that system, professors at MIT often harvest assignments and data from their Massive Online Open Courses they create on the platform and readapt them for their on-campus classes.

While Harvard groups have made substantive efforts to introduce HarvardX into courses across the University, the platform has not had as much of a widespread presence on this campus as it has on MIT’s.

“Harvard and MIT have made efforts to translate the work they're doing at HarvardX and MITx to the residential experience, and MIT has really made some substantial strides along that regard,” said Justin Reich, a HarvardX researcher and MIT lecturer who has authored and co-authored numerous reports about edX.

“I think Harvard is doing some interesting things, but I think they’re definitely still in the pilot phase,” Reich added, “and they're having less of a systematic effect across” the Faculty of Arts and Sciences.

In the fall of 2012, Harvard and MIT jointly rolled out several courses under their new platform edX, amidst widespread media excitement over the “tsunami” of MOOCs that were predicted to revolutionize the nature of education.

But online course material was nothing new for MIT. A decade earlier, the school had launched OpenCourseware, an initiative aimed at placing all content from MIT’s courses online and available to the world.

On the other hand, edX was Harvard’s first major experiment with MOOCs. And it did not roll out without controversy: A year after the announcement of the creation of edX, 58 Harvard faculty members signed an open letter calling for faculty oversight on the platform and raising concerns about it overall.

"I think Harvard is doing some interesting things, but I think they're definitely still in the pilot phase," said Justin Reich, a HarvardX researcher.

“It is our responsibility to ensure that HarvardX is consistent with our commitment to our students on campus, and with our academic mission,” the letter read. “Given the rapid pace of development of HarvardX, we believe it is essential to have a formal, sustained, and structured faculty discussion on these issues as soon as possible.”

To the knowledge of MIT faculty members interviewed, faculty raised no such public concern at MIT, although some MIT professors acknowledge that other faculty members were initially skeptical about the MOOC aspect of edX.

Some faculty and administrators from both Harvard and MIT say that MIT’s history with online course material resulted in the school’s easier transition to edX, while the new initiative spurred more public backlash from Harvard faculty.

“With OpenCourseWare there was this major push for MIT faculty to put all of their material online in the OpenCourseWare structure,” said Robert A. Lue, faculty director of HarvardX. “I think for their faculty it was less a transition in mindsets.”

MIT faculty members agree, suggesting that a culture of online courseware had already been well-established on MIT’s campus by the time the school introduced edX with Harvard.

“The transition over to MITx was facilitated with our experience with OCW,” said Saif Rayyan, lecturer and researcher of online education at MIT. “I found myself, as well as other faculty, naturally transitioning over to MITx.”

That initial hesitation on the part of the Harvard faculty, and the more open arms of MIT professors, might have served to accelerate MIT’s adoption of the platform that the two schools jointly engineered.

“I think it depends on the department and how quickly people buy into it,” said Mary Ellen Wiltrout, a curriculum development specialist for the Biology department at MIT. For most professors at MIT, she said, reception was “positive.”

Students and faculty from MIT say that MITx has become an expected—and almost unavoidable—part of the school’s curriculum, since it acts as part of the school’s learning management system and because faculty members often integrate aspects of their MOOCs into their residential courses. Just up the river, HarvardX has not been incorporated into students’ curriculum and has not taken hold to the same degree despite administrative initiatives, according to some faculty members and researchers.

Faculty from MIT and Harvard point to MIT’s history of experimentation with online resources as a reason for the school’s success in incorporating the platform into students’ curriculum.

“Once that culture was in place all online courses are just an extension of that,” said Chris Terman, a computer science professor at MIT. “It’s just taking OCW material and saying, ‘Well, let’s give students a chance to help them interact with the material and present it with them, as opposed to just posting it online.’”

According to Isaac Chuang, senior associate director of digital learning at MIT, the learning management system also makes it easier for professors to reappropriate MOOC content they have created into their on-campus classrooms.

“One of the benefits that we have is the ability to quickly turn around whatever we put up in MOOC form and readapt that content on campus,” said Chuang, adding that faculty members often reuse psets, videos, and assignments from their MOOC courses for their online courses.

“It’s definitely very prominent,” said MIT student Drew Bent of the platform’s presence on campus. He later added, “I can't think of any instance where you wouldn't interface with it at some point.”

FAS Dean Michael D. Smith said Harvard is exploring integrating HarvardX more systematically as does MIT. “MIT has had an explicit goal to have more of its undergraduates interact with the platform, and they followed a strategy that allowed that to happen,” Smith said.

TOP DOWN AND BOTTOM UP

Both universities have invested millions of dollars into new strategies to improve teaching and learning and have used edX as a means by which to do so. But the two schools have implemented different methods for managing their own offshoots of edX in order to reflect the differences in their faculty’s experiences with online education and their distinct curricula.

In 2013, MIT created an Office of Digital Learning specifically focused on rethinking education in “the digital age.” That same year, Harvard introduced its Office of the Vice Provost for Advances in Learning, which is headed by East Asian Languages and Civilizations professor Peter K. Bol and oversees HarvardX and the Harvard Initiative for Learning and Teaching, a presidential initiative launched in October 2011.

Since its inception, HarvardX has employed a central team of 48 full-time and seven part-time researchers, instructional development staff, and production management employees. They work on the fourth floor of 125 Mt. Auburn St. in a space self-dubbed “Hx HQ,” where teams edit video clips, write plans on the whiteboard walls, and produce courses for a faculty without a long history of online teaching.

Additionally, while HarvardX affiliates describe the course creation process for the platform as “grassroots” and “bottom up,” since faculty often approach Lue or Bol first to propose a course, the HarvardX affiliates work with these faculty each step of the way to ensure their course will be successful.

Down Massachusetts Avenue, MIT runs its MITx course proposal process and instructional support services through its Office of Digital Learning. The central staff is smaller at MIT than it is at Harvard, instructors receive support when they request it, and individual departments are instrumental in planning courses.

According to Wiltrout, most conversations that determine course content happen not through the Office of Digital Learning, but within individual departments. But at Harvard, the Office of the Vice Provost for Advances in Learning takes on a more involved role.

“We're more centralized at Harvardx,” Reich said. “We have a floor full of course developers and video editors...MIT has a more distributive model of course development, so they send resources out to professors groups and the faculty build the course with support but without the same degree of centralized support.”

Even beyond its history with online education and its professors’ acceptance of the program, some faculty members say that MIT’s focus on science and technology has further made transferring in-class materials to the platform easier.

“I think that, in general, MIT courses lend themselves to easier online implementations because of their science and math focus,” said Zhongzhou Chen, MITx postdoctoral fellow and educational researcher. “We still haven’t reached the stage when we can easily have computers grade English essays, but through algorithms we are developing, we’re trying to reduce that gap.”

Lue agreed that MIT’s educational focus may have better facilitated edX’s introduction onto its campus, while it may have been more difficult for faculty in Harvard’s many humanities and social sciences departments to think about an online version of their course.

“It’s also worth noting, besides the open courseware issue, that MIT is primarily an engineering school,” Lue said. “I think with Harvard it was much more unusual to think about these things in the context of the humanities and the social sciences.”

The edX platform is integrated into many of MIT’s “General Institute Requirements,” MIT’s set of distribution requirements, which often include first-year and introductory courses, according to MIT faculty.

"A lot of people question why they are paying money to come to a university to take courses online," said Andre Aboulian, an MIT student.

For MIT faculty, transitioning between their MOOCs and on-campus courses is made easier by the school’s use of Open edX as its learning management system. But Bol, Harvard’s vice provost for advances in learning, said Harvard is currently working on creating a means to use HarvardX internally only for Harvard, just as MIT does with its Residential MITx system. That system is expected to be available in the fall, Bol said.

Still, the degree to which the platform has been integrated into the traditional education at MIT leaves some students there questioning the compatibility of online learning in the campus setting.

Andre Aboulian, a junior at MIT, recounted his experience taking one specific MITx math course, saying that “students just try to get through [the course material] as quickly, so instead of those exercises being an hour of quality comprehension, it was about two minutes of students just clicking through random answers—this became very ineffective very quickly.”

Echoing the concerns raised on-and-off-again by various Harvard faculty members, Aboulian questioned the value of edX for the traditional students of the two institutions that founded the platform almost three years ago.

“A lot of people question why they are paying money to come to a university to take courses online,” he said.