Blurring the Extracurricular and Academic Divisions

With a new concentration in Theater, Dance, and Media, Harvard bridges the gap between academics and extracurricular activities 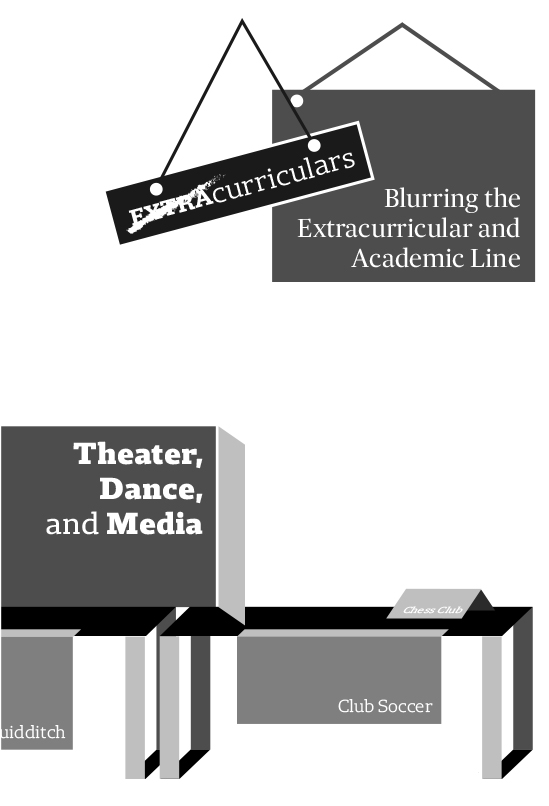 After weeks of rehearsal, countless lost hours of sleep, and perhaps a missed lecture or two, scores of undergraduates step on stage each semester to debut in student-run productions, just one of the ways many Harvard students spend their time outside of the classroom.

Yet for the first time in the school’s history, participating in such a student-run extracurricular activity will cease to be separate from some students’ academic life. It will fulfill a concentration requirement.

Earlier this semester, members of the Faculty of Arts and Sciences bridged the gap between academia and extracurricular life when they approved a new undergraduate concentration in Theater, Dance, and Media, one of many recent efforts to promote the arts at Harvard. Concentrators will be required to take to the stage in four performing arts productions. Two must be departmental shows, but two may be produced by student-run groups.

This new concentration follows discussions by administrators and professors, some of whom over the years have insisted that students should focus on their coursework—not their extracurricular activities.a

Dean of the College Rakesh Khurana has discussed student-run organizations on campus and concerns about their growing prominence. In an email in the fall of 2014, Khurana cited senior survey data from 2010, 2011, and 2013 showing that students spend more and more time on their extracurricular activities. Former Interim Dean of the College Donald H. Pfister said that over the past decade, the College’s club list has grown by more than 100.

But as the College readies to launch its new Theater, Dance, and Media concentration, a grey area between academics and student-run clubs and organizations has begun to emerge.

Indeed, some faculty members identify the concentration as an effort to formalize and validate the extensive time students spend on the performing arts outside of the classroom. Some of those students, too, said they both value their involvement in extracurricular groups and support the new concentration, making the curricular-extracurricular distinctions all the more fuzzy.

“Student involvement outside the classroom should be purposefully educational, so it is great to see involvement opportunities that span the extra-curricular and the curricular,” Associate Dean of Student Life David R. Friedrich wrote in an email.

STAGE TO PAGE AND BACK AGAIN

As the College launches its first performing arts concentration, faculty and administrators have incorporated student-run productions into the concentration curriculum in an effort to support the groups and emphasize hands-on learning.

“There’s such a strong extracurricular culture, and we wanted to build on that and preserve that, but also make sure that there would be a sort of give and take between that and the new concentration,” said English professor Martin Puchner, who formally proposed the Theater, Dance, and Media concentration in the fall of 2012.

To fulfill one of the Theater, Dance, and Media concentration’s requirements, students may count two performances produced by student-run groups, though these productions will not count towards the 32 half-courses required to obtain an undergraduate degree. Some faculty members said they recognized the time students spend working in performing arts organizations on campus.

“There’s been consistent demand by students to get...recognition and credit in a way for the incredible energy and time and thought that a lot of students have brought to theater,” Puchner said. “So it seemed only natural to create a concentration.” 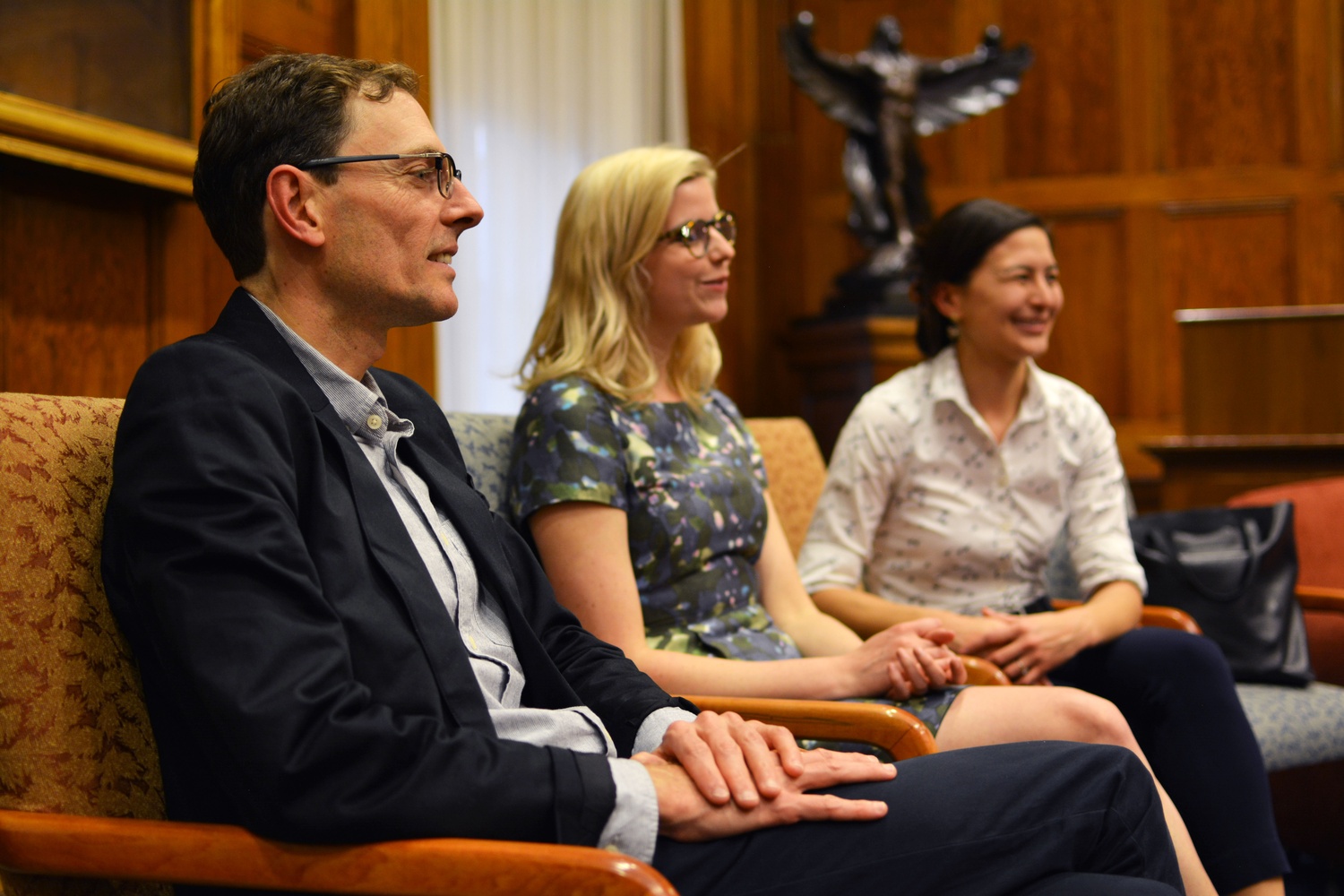 Chair of the Committee on Dramatics Prof. Martin Puchner, left, and graduate students Tarryn Li-min Chun, center, and Elizabeth M. Phillips, right, attended an open forum on the future of theater at Harvard in April. By Y. Kit Wu

“It was the desire to find a space where the entrepreneurial independent theater-making that has always been so strong at Harvard could be supported, so we didn’t want a concentration that separated the extracurricular theater making so drastically that it would feel at a loss,” said Diana Sorensen, FAS’s dean of arts and humanities. “Letting students count some of that towards the concentration seemed like the right balance.”

Administrators and professors suggest that given the subject material of the concentration, involvement in the production process constitutes an essential learning experience. “Participation in performing arts productions, whether curricular or extracurricular, will provide opportunities to deepen the intellectual study of the various art forms,” Friedrich wrote.

Jack Megan, the director of Harvard’s Office for the Arts, emphasized that the performance requirement serves as a key way to inform concentrators’ academic work. He said the program intends for coursework and out-of-class performances to work in tandem.

“[The program] is going to be integrated, so there will be movement from the curricular into the extracurricular,” Megan said.

Concentration architects are not the only ones excited about the blending of extracurricular life and academia—leaders of these groups believe the change will help their clubs gain resources and momentum.

Harvard-Radcliffe Dramatic Club President Magdalene M. Zier ’16 said HRDC overall is “very, very excited” about the new concentration and hopes that it will not fragment theater on campus but incentivize students to join club productions instead.

“I think it will definitely bolster participation in shows,” Zier said. “We all spend so many hours a week doing this stuff, and getting academic credit as well will only help.”

The process of auditioning for shows, called Common Casting, for a long time has been organized, publicized, and managed by students. With Theater, Dance, and Media concentrators’ ability to partake in HRDC productions, club leaders and concentration coordinators have been discussing potential overlap.

Those involved in student-run productions hope to benefit from the College’s funding and hiring professionals for the concentration. 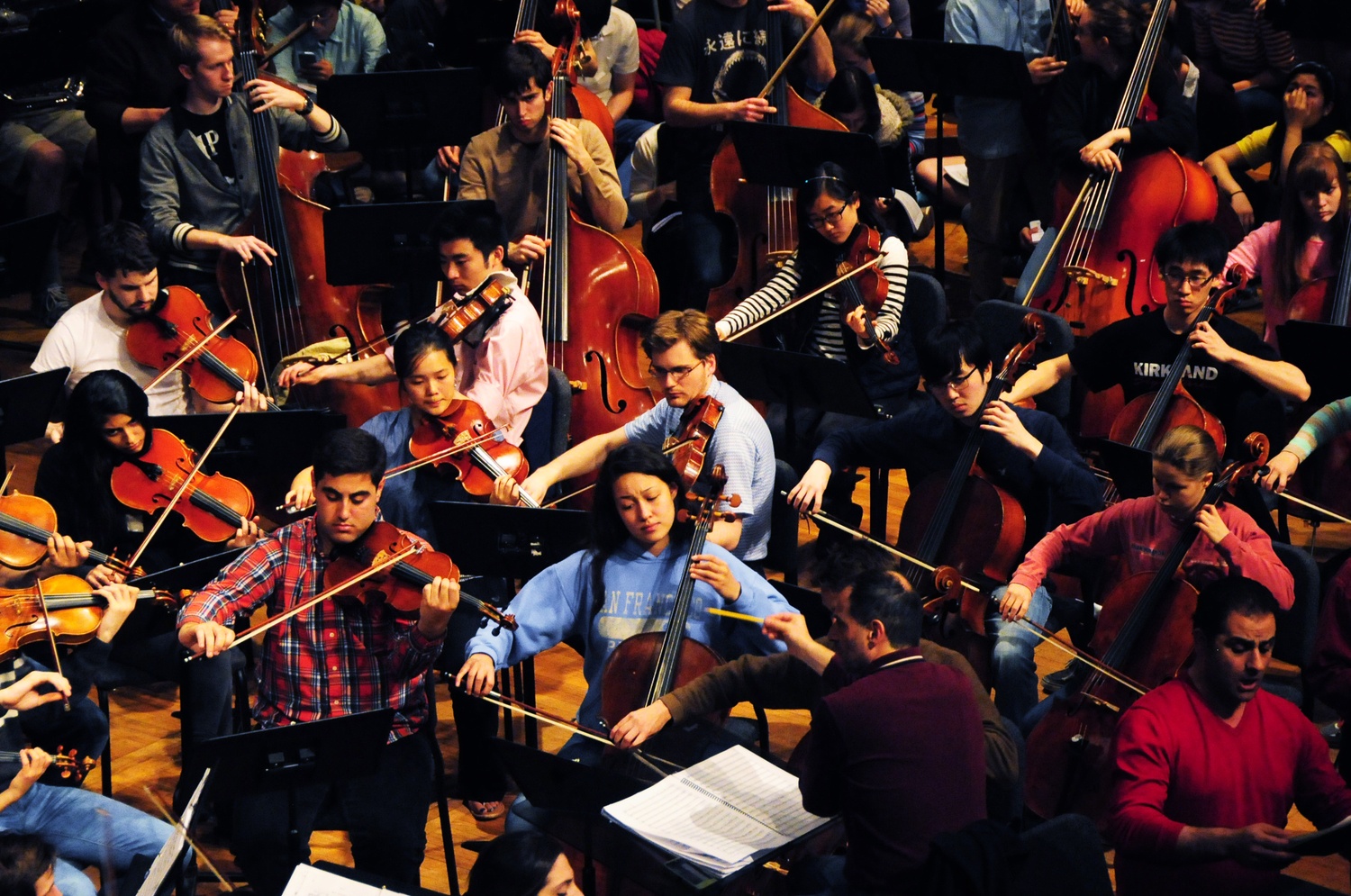 Members of the Harvard-Radcliffe Orchestra gather in Sanders in April for rehearsal in preparation for "Verdi's Requiem." By Varnel L Antoine

“What we’re really hoping is that there is going to be an outpouring of resources and support from the administration, who have expressed that that is certainly going to be the case, so we are really excited to work with them,” said Jake S. Stepansky ’17, an HRDC board member who coordinates shows in the Loeb Experimental Theater.

These resources include structured professional feedback and exposure for concentrators, according to Ryan S. McKittrick, the director of artistic programs and dramaturg at the American Repertory Theater.

Despite the increase in some resources, the new concentration will share much of the same spaces currently used by student-run shows, a concern that designers of the concentration have voiced.

“We don’t want to compromise the extracurricular opportunities,” Megan said.

Some students still are optimistic about the overlap. “What has been great is that the administration and faculty have been very forthcoming about their plans, and very positive, and excited about what this concentration is going to mean in terms of space usage,” Stepansky said.

Still, Theater, Dance, and Media represents only part of a broader discussion about the convergence of the academic and extracurricular lives of students at the College. Across the board, faculty and administrators have said now that the binary picture of academia versus extracurricular life is not as distinct as it largely has been painted.

Although Khurana said the academic component of a student’s life at the College is critical, he also said that in the future both curricular and out-of-the-classroom aspects of their lives can merge.

“Moving forward, we hope to continue to build a supportive environment where students can integrate their academic, social, and personal choices in ways that reinforce that important goal,” Khurana wrote in an email.

While the incorporation of student-run productions in the Theater, Dance, and Media concentration curriculum is in many ways new, there already do exist some blurred lines between academia and activities that take place outside of the classroom.

Participation in the Harvard-Radcliffe Orchestra, which is led by a faculty member, earns students course credit towards their diploma graded on a satisfactory/unsatisfactory basis, according to HRO President Aaron Z. Roper ’16.

“[Academic recognition is] a big acknowledgment of all the hard work we do, and the fact that we are working with a faculty member means that it is supervised, a more structured environment than just a typical extracurricular activity,” Roper said.

Navigating middle ground comes with its own set of challenges, however, and earlier this spring HRO Director Federico Cortese and senior lecturer in the Music department pointed to limitations of preserving some extracurricular aspects of the orchestra.

“If we decide that the faculty/conductor model is what we want to have, we have to push it all the way and make these groups rigorous, selective, and evaluated on stringent and strict criteria,” Cortese said. “Hence, grades.”

"We didn't want a concentration that separated the extracurricular theater making so drastically that it would feel at a loss," said Diana Sorensen, the Faculty of Arts and Sciences' dean of arts and humanities.

But for thousands of students involved in hundreds of other extracurricular activities next year, the time and effort they spend outside of the classroom will not fulfill any academic requirements, even though many said that non-coursework constitutes an important part of their education.

Ross C. Svenson ’15, a Government concentrator, participated in the Harvard Democrats and programs at the Institute of Politics throughout his time as an undergraduate. Svenson said his experiences enhanced the course material he studied in his Government classes, though he never fulfilled academic requirements for the time he spent and the work he did for extracurricular activities.

“I think people derive a lot of enjoyment and learn a lot of practical skills…in those extracurricular organizations,” Svenson said. “I think [connecting extracurriculars and academics] would help the College’s problem with student overcommitment to extracurriculars.”