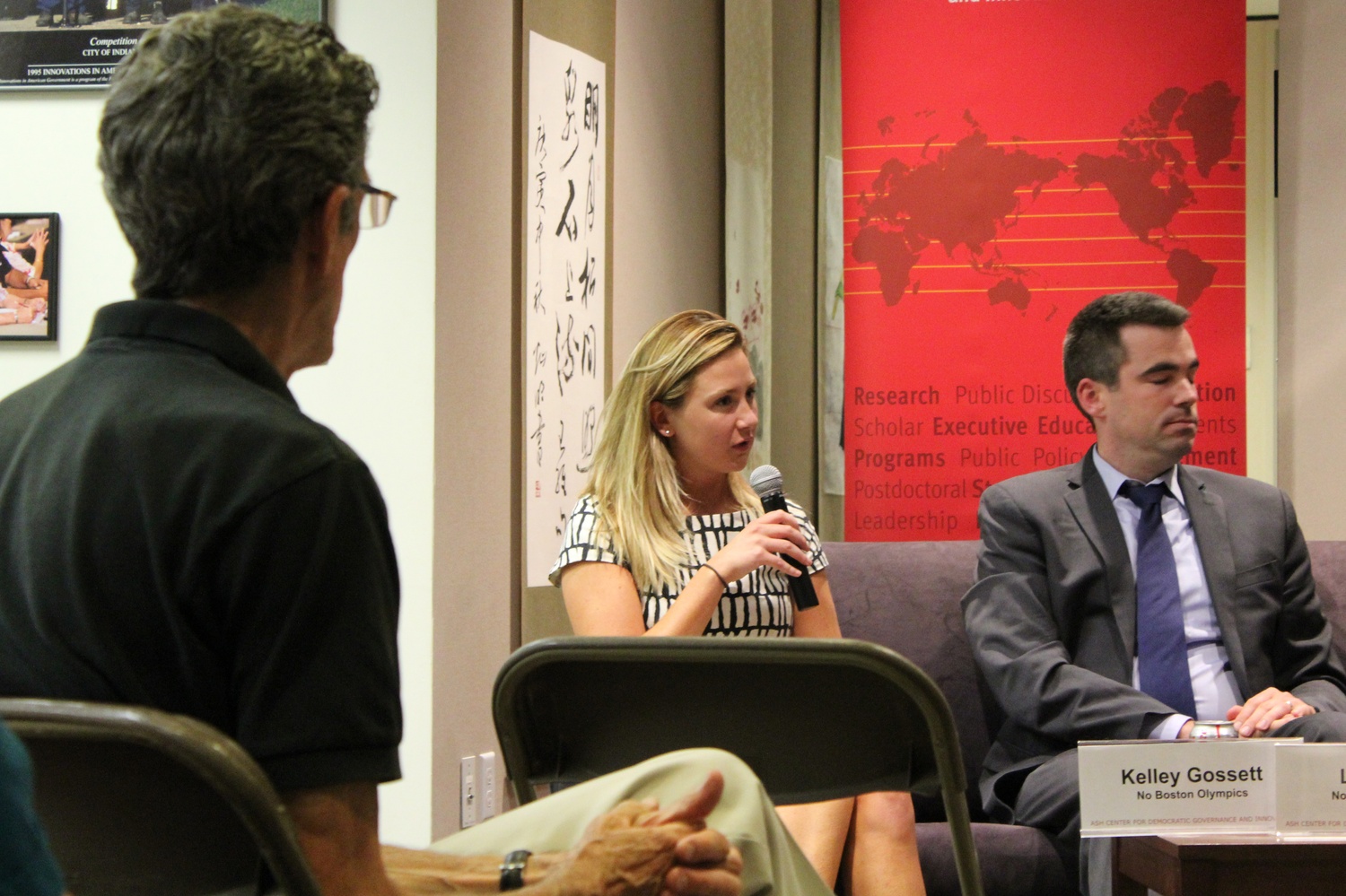 "It's all day, all night. It's not a job it's a lifestyle," said No Boston Olympics organizer Kelley Gosset Wednesday at the HKS Ash Center for Democratic Governance. She and fellow activists Liam Kerr and Chris Dempsey discussed the importance of grassroots movements among local residents in their campaign against the 2024 Boston Olympic bid. By Sidni M. Frederick
By William C. Skinner, Crimson Staff Writer

The grassroots movement against Boston's bid to host the 2024 Olympic Games was key to its failure, the leaders of the group No Boston Olympics and Boston Magazine journalists argued at the Kennedy School of Government on Wednesday.

The panel event, hosted by the Kennedy School’s Ash Center for Democratic Governance and Innovation, was less than two months after the United States Olympic Committee and Boston 2024 moved to end the Boston Olympic bid campaign.

Liam Kerr, one of the co-chairs of No Boston Olympics, a volunteer organization that opposed the Boston Olympics bid, highlighted the role that word of mouth played in the bid's take-down.

“You just need everyday citizens to just be paying attention. If one out of five people were not paying attention when they were, poll numbers would have flipped and Boston could have still had the Olympic bid today,” he said.

Boston residents had voiced their concerns about the bid throughout the campaign, especially wary that the 2024 Olympics would overrun projected costs and force the city to use public funds to finance venues and the Games' execution. A WBUR and MassInc poll conducted in July found that only 40 percent of Boston area voters supported the bid.

Journalists from Boston Magazine on the panel were quick to point out what they characterized as critical flaws in the bid from its very beginning, emphasizing in particular a lack of communication with the general public and the media on the part of the Boston 2024 organizers.

“The bid organizers didn’t even attempt to get out into the community and ask people what they thought about the bid. Boston 2024 created a cloud of suspicion not only among the public, but among the press,” said Garrett Quinn, a digital news editor for the magazine. “Their inability to work with the press and to build consensus with the community and stakeholders hurt them even more.”

Christopher Dempsey, a Harvard Business School graduate who co-chaired No Boston Olympics, argued that working with residents to hash out ideas would have helped them develop trust with the general public and improved the bid.

“There is a great story about ‘small d’ democratic governance,” Dempsey said.