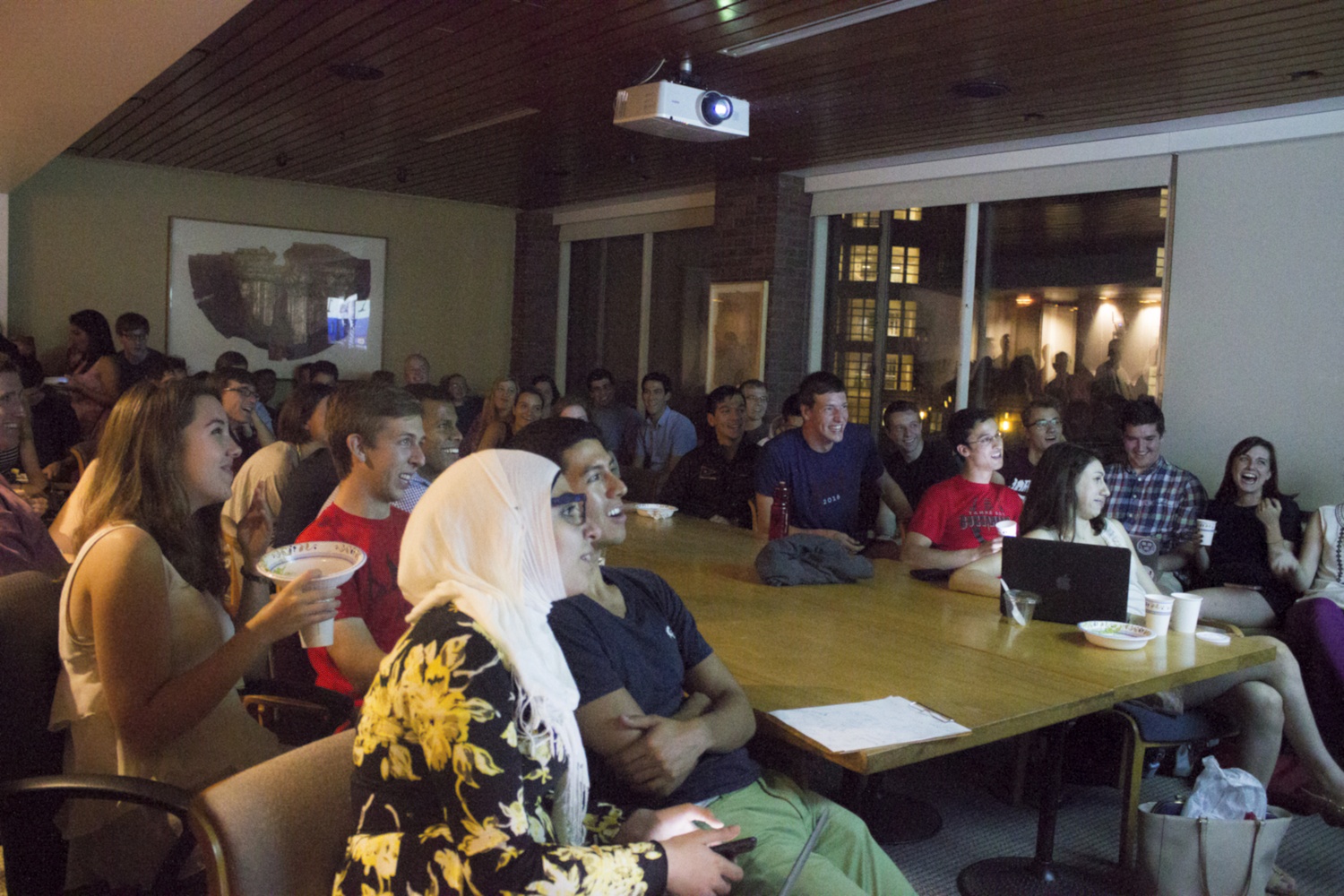 Members of the Harvard Republican Club and other students watch the Republican primary debate on CNN. The event filled three rooms at the IOP. By Savannah I. Whaley
By Michael S. Avi-Yonah, Crimson Staff Writer

As students gathered around campus for viewing parties of the Republican presidential debate on Wednesday, candidate Donald J. Trump’s animated performance was the center of undergraduate attention, triggering both laughter and dismay.

Republicans and Democrats, freshmen and seniors, all roared as the business mogul-turned-politician derided the other candidates for the Republican Party's nomination in 2016 and extolled his own virtues.

At the Institute of Politics’ debate watch party, co-sponsored by the Harvard Republican Club, three rooms hosted a crowd of about 70 people in total. They resounded with laughter as Trump attacked fellow candidate Senator Rand Paul for his appearance.

After questioning why Paul, whose poll numbers have hovered at 2 or 3 percent, should be present at the debate, Trump remarked that he has never “attacked him or his looks” and that “there’s plenty of subject matter right there.”

Compared to the bombastic Trump, other candidates drew limited attention from undergraduate observers at the watch party. Jokes from New Jersey Governor Chris Christie and Ohio Governor John Kasich elicited some mild chuckles, but some students pulled out their phones or focused on event bingo sheets when Trump finished speaking.

That is not to say, however, that the crowd of Harvard students support the controversial candidate. The enthusiasm, some attendees noted, seemed largely in jest.

Students “were definitely laughing at him,” Alex H. Meade ’19 said.

Students were not “thrilled” with where Trump steered the debate, Declan P. Garvey ’17 added. “It geared the debate more toward entertainment,” he said.

“While it’s entertaining when Trump says what he says, it’s not presidential to be able to get Jerry Springer-style oohs and aahs out of people,” suggested Aaron I. Henricks ’16, the Republican Club president.

On the other side of campus, and the political spectrum, the Harvard College Democrats hosted their own debate watch party in the Big TV Room at Mather House. The mood at this event, though, was notably less boisterous than the atmosphere at the IOP. They, too, laughed at Trump, but the crowd of about 15 students in Mather seemed overwhelmingly concerned by the opposing party's candidates and their views.

“We’re definitely laughing at Trump, but it’s a nervous laughter because he could actually be running the country," said Jacob R. Carrel ’16, the College Democrats president.

The modest crowd at the watch party shrank considerably after a fire drill interrupted the event.