At First Meeting of the Semester, UC Passes ‘Interim’ Budget 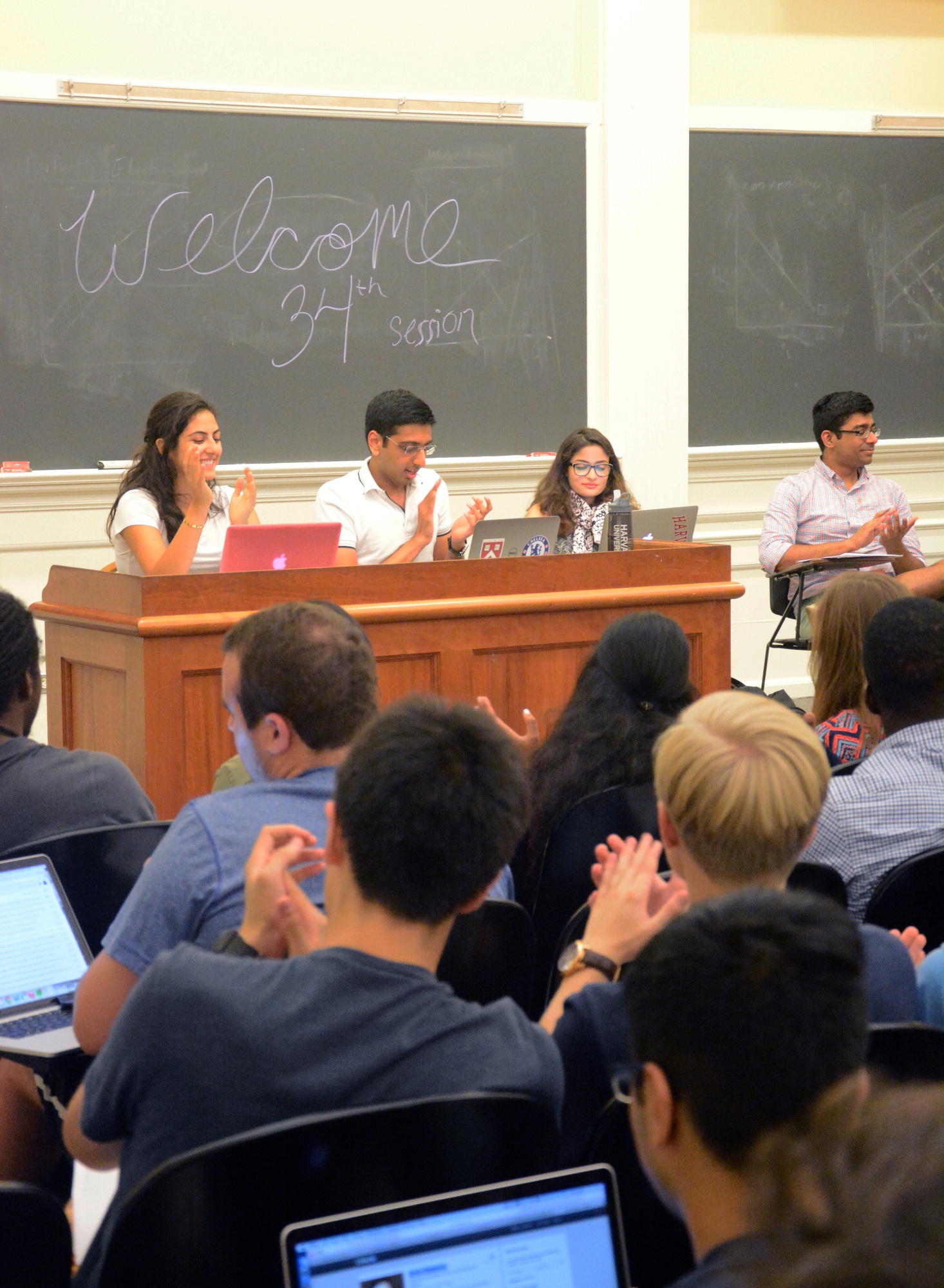 Undergraduate Council representatives voted to pass an interim budget of approximately $500,000 for the 2016 fiscal year at the first meeting of the semester that included newly elected students.

The budget’s two largest allocations include about $320,000 for student groups and $146,000 for House committee activities.

The money originates from a $75 student activity fee in each student’s term bill, according to UC treasurer Meghamsh Kanuparthy ’16. The UC also receives external funding from Harvard Student Agencies and the Business School’s HBX program, which make up the operations budget.

Although this year’s fiscal budget closely resembles last year’s, the Council’s projected operations budget, which sources its funds from non-student funds, grew by $1,500, a 20 percent increase from last year. The Council also allocated $10,000 to the Freshman Class Committee, which attained committee status last semester, for expenses like study breaks and freshman programming.

According to Kanuparthy, the budget stands as an interim measure to immediately fund student groups and House committees, and changes can be made in the next two weeks.

“We don’t want this to be the final budget,” Kanuparthy said at the meeting. “After a conversation that everyone is a part of, we can move forward with a final version of the budget.”

He added that in previous years, representatives engaged in little discussion about “what the budget should look like.” The final version of the this year’s budget will be passed on Oct. 2 following further discourse among members.

As part of a new policy, the Council voted to earmark $2,500 from the $10,000 student initiatives budget to split among the four House neighborhoods—the Quad, the Square, River West, and River East—for individual neighborhood parties, which Student Initiatives Committee Co-Chair Shaiba Rather ‘17 described as “a way for people to be included.”

“We really want to set a precedent for the school year of how social life is going to look,” Rather said. “Yes, [students] have their intimate House community within the larger Harvard, but they also have other students outside of that as well.” 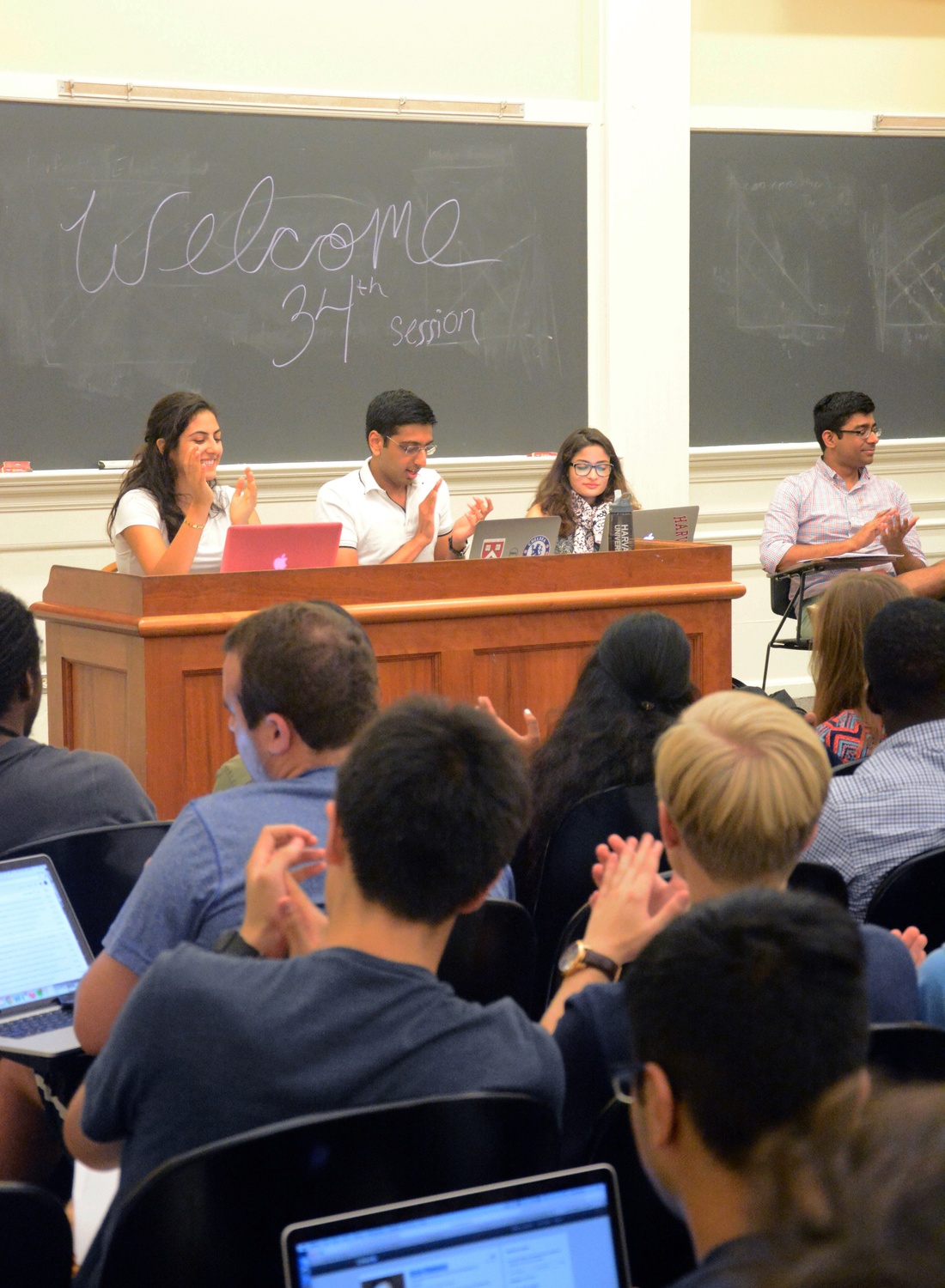 In addition, Avni Nahar ’17 and Hajar El Fatihi ’17 lobbied for Council support to host an inclusive College-wide party sponsored by several women’s groups on campus. The duo said Harvard’s social scene tends to be "controlled by men," and their proposed party, which will be held at the Science Center Plaza in early October, seeks to replicate the atmosphere of House formals, as opposed to other more casual College events.

At the end of Sunday’s meeting, Winthrop House representative Daniel R. Levine ’17, a Crimson news writer, questioned Nasrollahzadeh and UC Vice President Dhruv P. Goyal ’16 on their decision to fund the smartphone calendar application called “Ventfull” for an additional semester. According to Nasrollahzadeh and Goyal, the decision to allocate $1,200 in funding was made without a vote by the Council at large. Goyal added that Ventfull required immediate funds because it was used during freshman orientation week by the Class of 2019.