Outsider Slate for Board of Overseers Calls for Free Tuition, Questions Affirmative Action 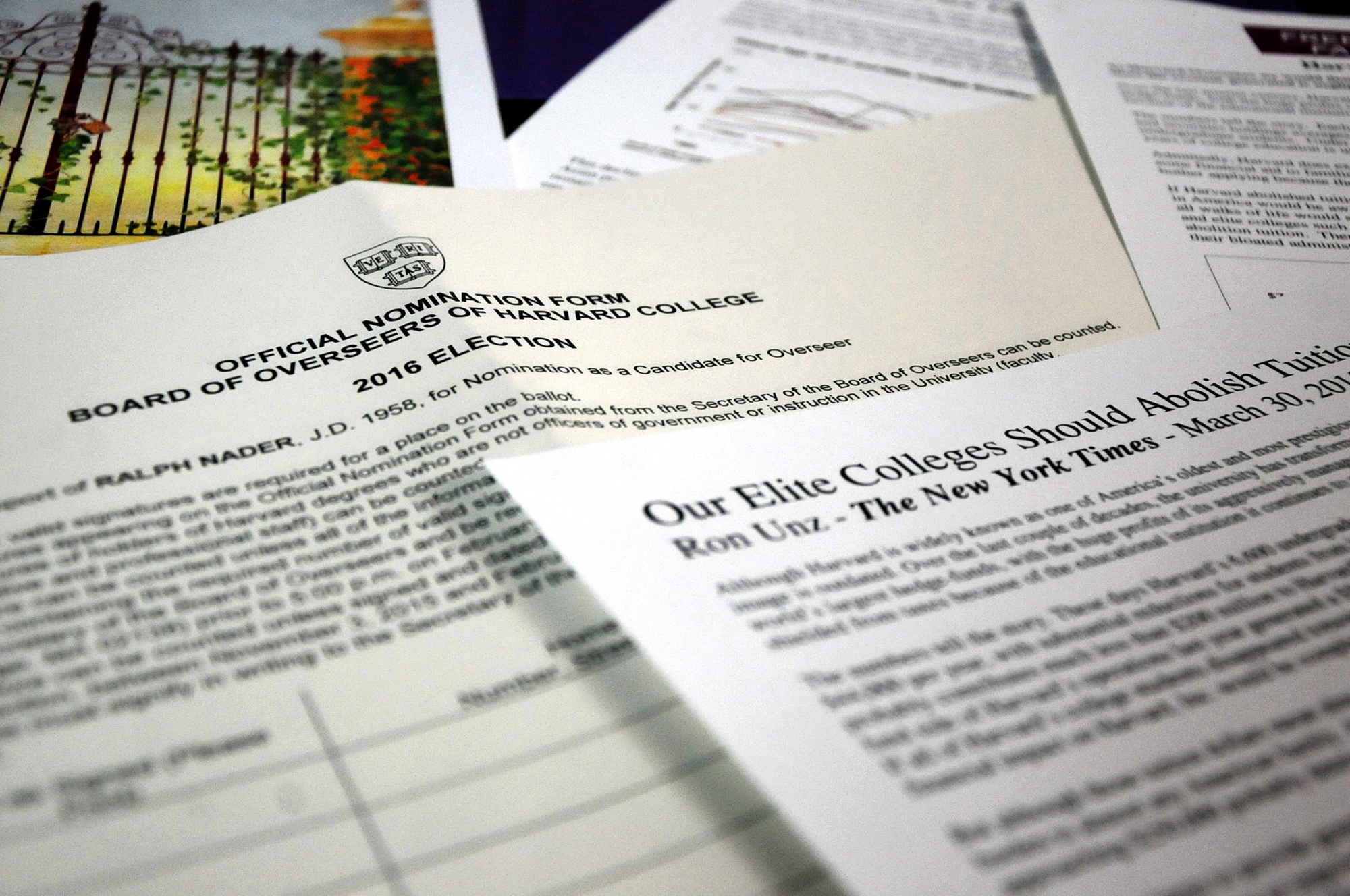 An outsider group of five Harvard alumni running for the Board of Overseers are arguing for free undergraduate tuition and a review of race in the University’s admission practices. The group calls itself "Free Harvard, Fair Harvard."
By Andrew M. Duehren and Daphne C. Thompson, Crimson Staff Writers

A group of five Harvard alumni are running for the Board of Overseers, the University’s second-highest governing body, on an unconventional ticket: eliminate undergraduate tuition and make public how Harvard considers race in its admissions practices.

Ron K. Unz ’83, the campaign’s organizer and spokesperson, said a free College education would combat the perception that only wealthy students can afford to attend Harvard.

Unz, an outspoken conservative and Silicon Valley entrepreneur, said he decided to create a campaign for the Overseers because he thought Harvard had not been responsive to concerns he raised in columns for the New York Times and elsewhere, in which he criticized Harvard’s high tuition costs and what he alleges are admissions quotas against Asian students.

The group’s formation is recent; Unz said he recruited the other candidates within the past three weeks. Joining Unz and Nader on the slate are physicist Stephen D. Hsu, conservative writer Stuart S. Taylor, Jr., and NewEgg’s Chief Legal Officer Lee C. Cheng ’93, all of whom have previously argued against race-based affirmative action. 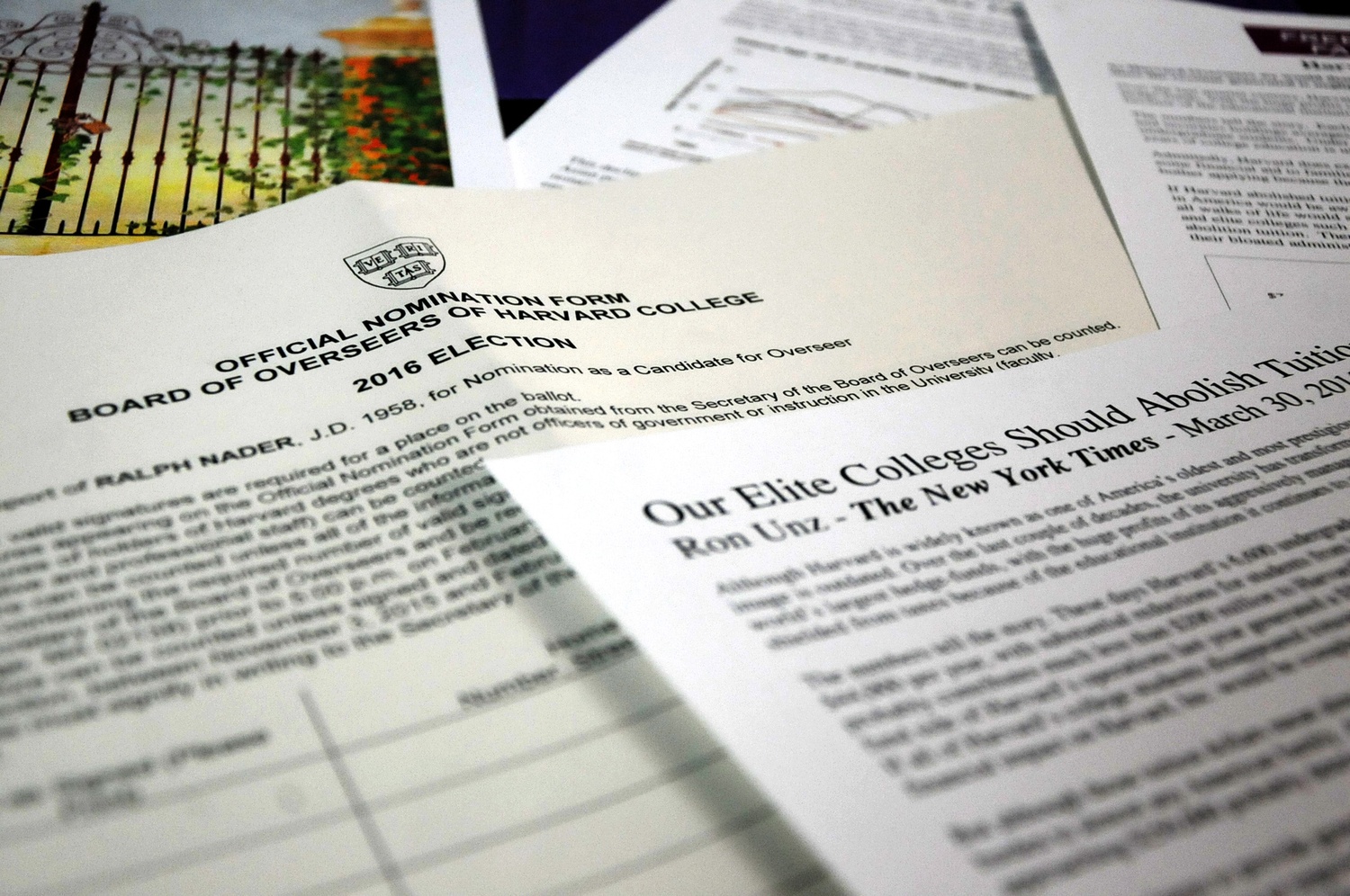 An outsider group of five Harvard alumni running for the Board of Overseers are arguing for free undergraduate tuition and a review of race in the University's admission practices. By Thomas W. Franck

Most Overseer candidates are nominated by the Harvard Alumni Association—they nominated eight this year— but the organization did not nominate any members of the slate. Still, the group will qualify to run in the Overseers elections this spring if each member gains a certain number of Harvard alumni signatures. Anyone with a Harvard degree can vote for Overseers, a body currently composed of 30 members who each serve six-year terms.

In a statement challenging the platform, University spokesperson Jeff Neal wrote that Harvard has a “generous” financial aid program. More than 60 percent of Harvard undergraduates receive some form of aid, and families who make $65,000 or less each year pay nothing for tuition, room, and board, according to Neal. He emphasized the complicated and segmented nature of the endowment, writing that Harvard cannot and would not liquidate parts of its funds.

“There is a common misconception that endowments, including Harvard’s, can be accessed like bank accounts, used for anything at any time as long as funds are available,” Neal wrote. “In reality, Harvard’s flexibility in spending from the endowment is limited by the fact that it must be maintained in perpetuity and that it is largely restricted by the explicit wishes of those who contributed the endowed funds.”

Still, if elected to the Board of Overseers, the group says it would “demand the immediate elimination of all tuition for undergraduates,” according to its initial platform. That move could make a Harvard education appear more attainable to students from lower-income families, according to Unz.

“If Harvard eliminated tuition, very quickly almost everyone in America would know about it, and a lot of less affluent families...would suddenly consider Harvard for the first time,” Unz said.

Harvard College’s Director of Financial Aid Sally C. Donahue holds a different view. In an interview last fall, she contended that eliminating tuition for all students would diminish Harvard’s resources and offer a free education to students whose families could actually afford to pay the sticker price.

Echoing the allegations of an ongoing lawsuit against Harvard, the group of candidates also argues that the College’s admissions processes set illegal quotas on applicants of Asian descent. In its platform, the group demands “greater transparency in the admissions process, which today is opaque and subject to hidden favoritism and abuse.”

Edward Blum, a conservative advocate leading the lawsuit against the College, praised the group’s stance. In its anti-affirmative action arguments, Blum’s initial complaint against Harvard cites Cheng, a member of the group of candidates and the founder of the Asian American Legal Foundation.

“It is gratifying to see the momentum to end racial classifications and preferences in admissions at Harvard is growing among Harvard alumni,” Blum wrote in an email. Several Asian American organizations and alumni have also received the campaign’s platform enthusiastically, according to Unz.

“Harvard College’s admissions policies are essential to the pedagogical objectives that underlie its educational mission and are fully compliant with the law,” Neal wrote.

The deadline for petitioning to run for an Overseer position is February 1.