Lassonde Will Stay on Campus To Teach 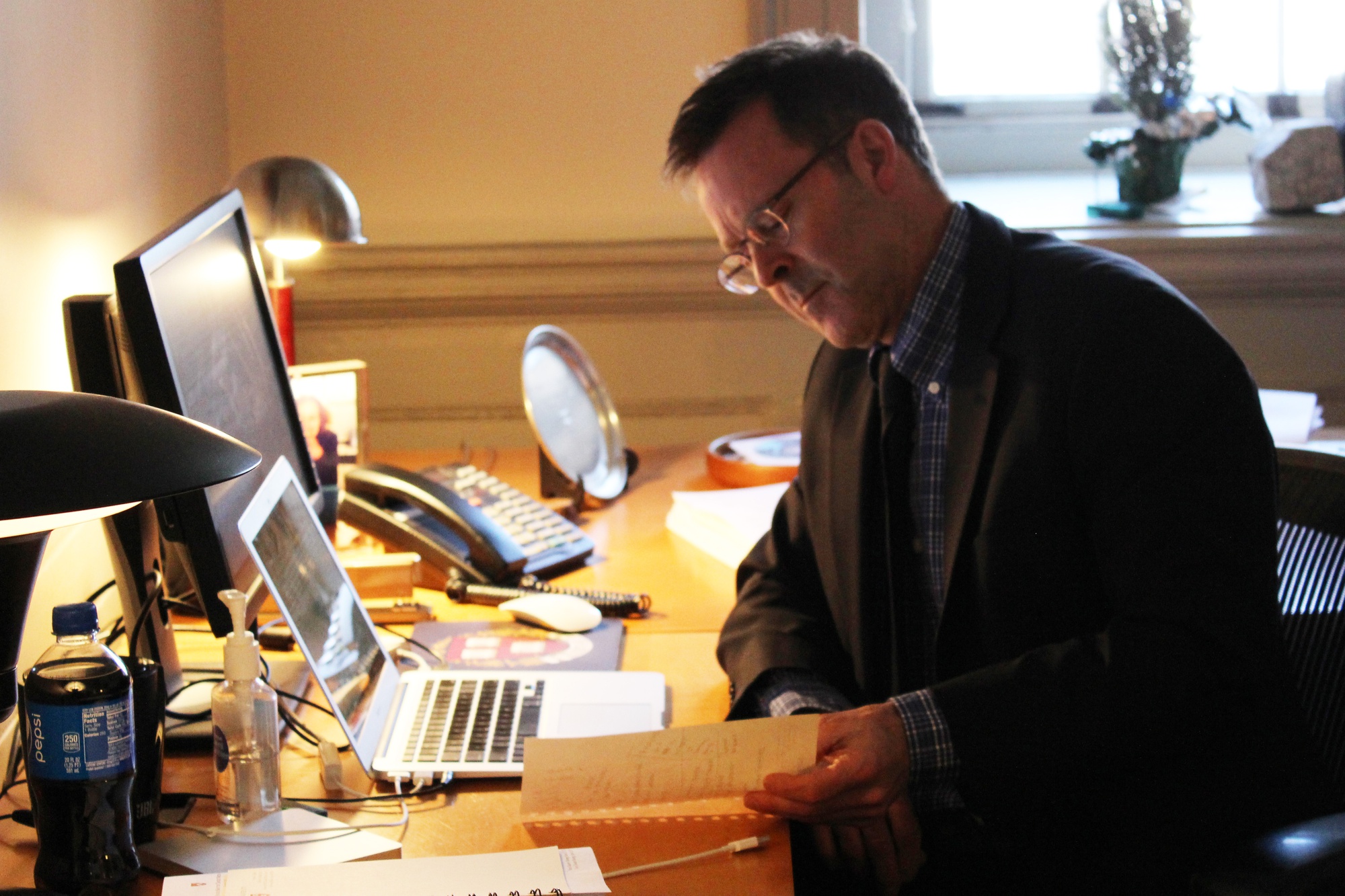 Dean of Student Life Stephen Lassonde works in his office in University Hall on Monday afternoon in anticipation of Housing Day. Administrators have been increasingly concerned about the amount of time students spend on extracurricular activity.
By Jalin P. Cunningham and Ignacio Sabate, Crimson Staff Writers

Stephen Lassonde, who publicly stepped down from his role as Dean of Student Life effective Feb. 1, will remain on campus as a lecturer this spring, although early signs indicated otherwise.

Last Friday, Dean of the College Rakesh Khurana wrote in an email to undergraduates that Lassonde would step down, and shortly thereafter, Lassonde’s History seminar was removed from the course catalog. In an email last week, Lassonde wrote, “I will miss Harvard and all it affords and I will particularly miss you students.”

But in a sudden turn of events, Lassonde’s course—History 74j: “Children and Childhood in America, 1640-Present”—has been reinstated in the Harvard course catalog. Lassonde said that a dean’s teaching position is typically contingent on his or her primary administrative appointment, but he was granted status as a lecturer for the spring semester in order to teach his course.

Lassonde said he will also remain a resident of Mather House, where he currently resides on the nineteenth floor of the House’s tower, until the end of the spring semester. Mather House co-Master Michael D. Rosengarten wrote in an email that “Mather looks forward to [Lassonde] being with us for at least several more months.”

Last Saturday, College spokesperson Rachael Dane wrote in an emailed statement that Lassonde would be stepping down on Feb. 1 as dean of student life, and “will no longer be an employee of Harvard College.”

On Thursday, she confirmed that Lassonde will “remain a member of the Mather House community during the 2016 spring semester.”

Mather residents this week lamented what appeared to be Lassonde’s imminent departure. Both Rosengarten and co-Master Christie McDonald said Lassonde was a valuable addition to the House.

Lassonde’s seminar, which “explores the literature in the history of children and childhood in America from the 17th century to the present,” according to a description posted on the course catalog, is well-received. All eight respondents in the 2015 course evaluation said the class was “excellent.”

When asked “What would you like to tell future students about this class?” some respondents wrote in their evaluations that the course was “pretty much the ideal history seminar” and a “great class,” with more than one describing Lassonde as an “amazing professor.”

The initial cancellation and subsequent re-listing of the course inconvenienced some students interested in enrolling in the class.

“It definitely did throw a wrench in my course planning,” Gregory A. Briker ’17, an inactive Crimson editor, said after the course was initially cancelled. “Since Lassonde's class was a seminar, I was prioritizing it to some extent and finding other classes that worked around it.”

After seeing the course had been relisted, Briker said he was “most likely taking it.”

The brief email announcing Lassonde’s departure came just three days after Khurana wrote in a letter to Currier House that Lassonde would lead the search for their new House masters and hold February meetings.

Administrators have been silent on the reason behind the departure.

Lassonde has yet to comment on why he is leaving the deanship. Dane wrote that the College declined to comment on the reasoning behind the departure, citing a policy against commenting on personnel matters.

In the meantime, Dean of Freshmen Thomas A. Dingman ’67 will assume leadership of the Office of Student Life on an interim basis this Monday, and will lead the search for new House masters in Currier House.