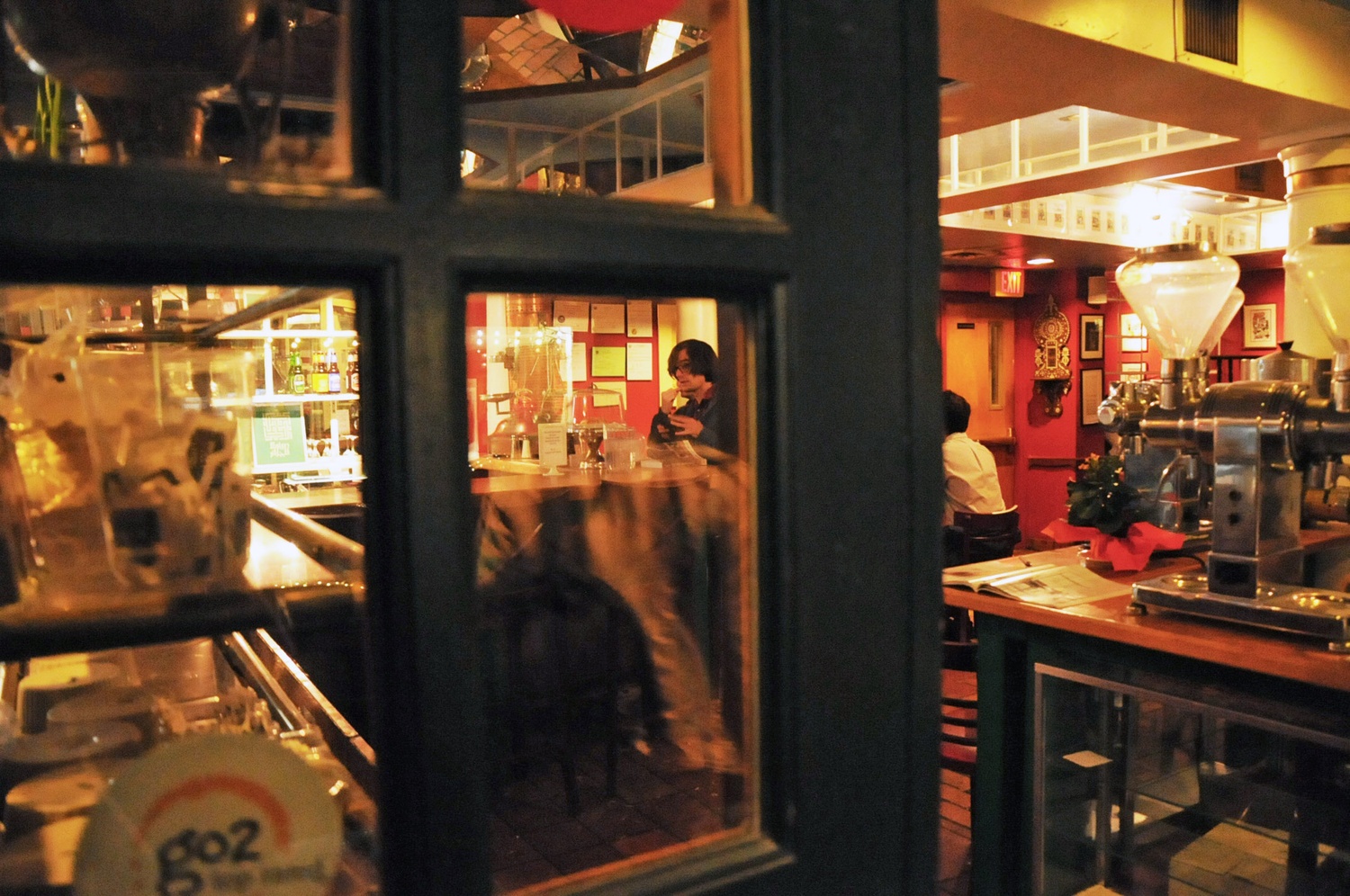 Denizens of Algiers Coffee House enjoy one last night at the cafe. Algiers, which has been a fixture in Harvard Square for the past 45 years, closed Sunday night. By Annie E. Schugart
By William S. Flanagan and Nicholas W. Sundberg, Contributing Writers

Patrons sipped cups of mint tea as they sought to savor the final hours of Café Algiers, a restaurant that served up Middle Eastern treats for 45 years in Harvard Square.

Catching customers off guard, the local institution announced on its Facebook page late Friday evening that it was closing—Sunday night was the café’s last.

“Algiers will be closing, after many years of business, many years of hard work, and many stories,” the post read. “Please keep all our cooks, waitresses, and managers in your thoughts—and think of us when you next drink mint tea!”

Located at 40 Brattle St. in the same building as the Brattle Theatre and Alden and Harlow restaurant, Café Algiers was a frequent stop for Harvard students and faculty. The restaurant's menu offered a range of fare from falafels and hummus to coffee, to go along with their popular mint tea. Tiled walls and a second floor lined with manuscripts and books distinguished the café as unique among eateries.

Robert Chalfen, a local resident who has been a customer at Algiers for more than 30 years, described the special “ecosystem” that helped the café retain its character in spite of renovations.

“There’s nothing quite like it,” Chalfen said, lamenting what he called the corporatization of Harvard Square. “Sort of like being an endangered species in a habitat of some sort of overspecialized coral reef.”

Chalfen expressed dismay at what he deemed the homogeneity of modern café culture, especially with respect to the recent changes in Harvard Square. With Algiers now gone, he said Café Pamplona is the last Harvard Square café he enjoys.

“It’s going to upset my psychogeography rather dramatically,” Chalfen said.

Algiers is one of string of business in the Square that have closed over the past year, a list that includes Panera Bread, Uno Pizzeria, and Au Bon Pain. Some restaurants have pointed to rising rents as the cause for the closures. The exact cause of Café Algiers’ closure is unclear.

Cambridge residents were surprised by the announcement, and expressed sadness and disappointment over the closure of a longtime local mainstay. Patrons could be seen writing parting notes and contact information on napkins at the front counter Sunday evening around 9 p.m.

Some students who visited the café Sunday noted the melancholy atmosphere over the sudden closure.

Boston University senior Mehar Maju has frequented Algiers since her freshman year. She said the café’s shutdown for her marked a full-circle event as she prepares to graduate and move back to her native Los Angeles.

“With the closure of the café it feels like I’m getting a closure on my time in Boston,” Maju said.