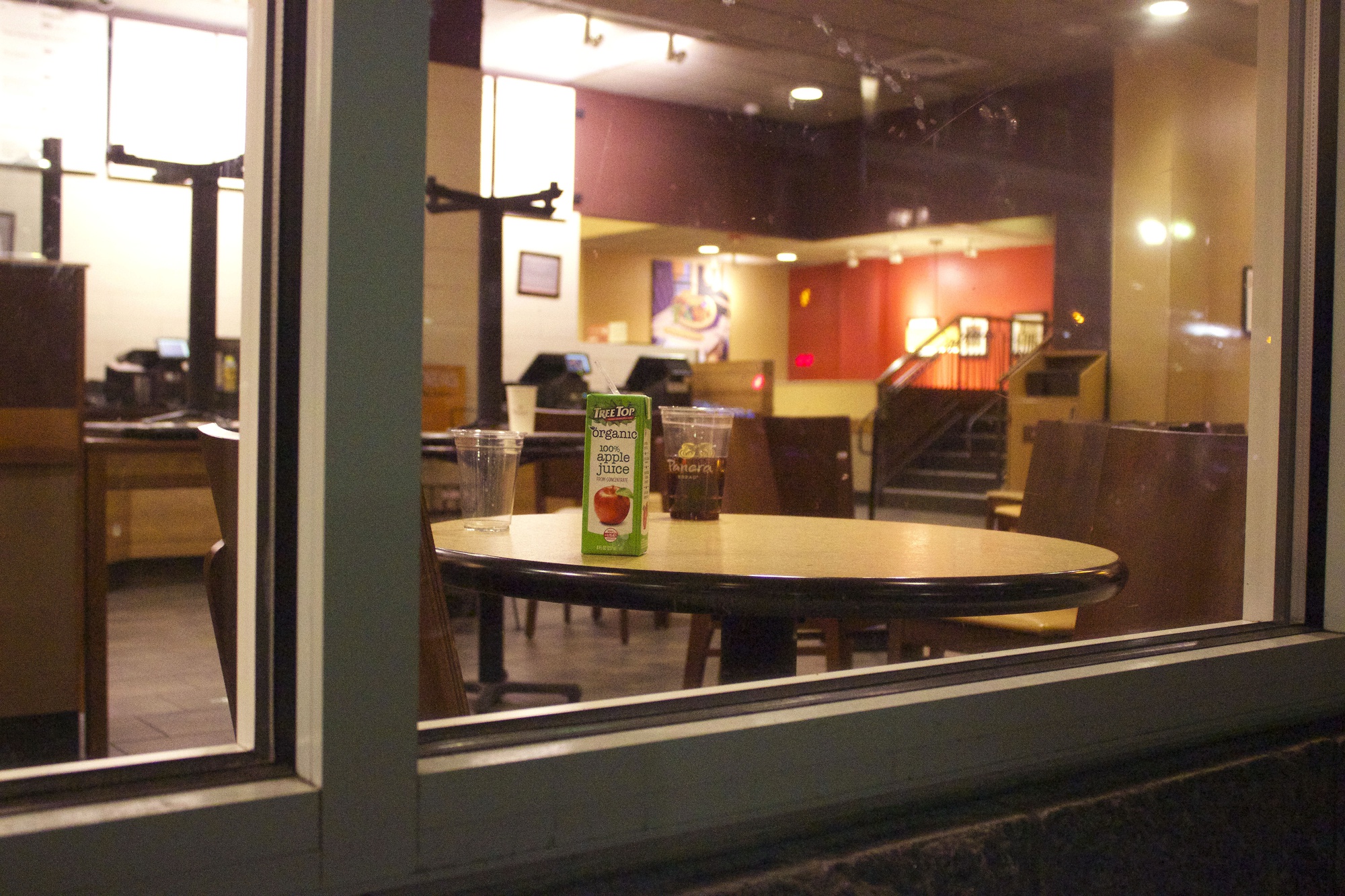 A juicebox and soda sit abandoned on a table after Panera announced that it is closing indefinitely.
By Junina Furigay, Crimson Staff Writer

Panera Bread customers were stunned and devastated to learn the bakery-cafe chain had abruptly closed its Harvard Square location Monday.

Eager customers were greeted this week not with the sweet scent of cinnamon buns but rather with a typed note taped to Panera’s door stating, “This Panera cafe is permanently closed as of Monday, 2/29. We sincerely apologize for any inconvenience that this has caused you.” 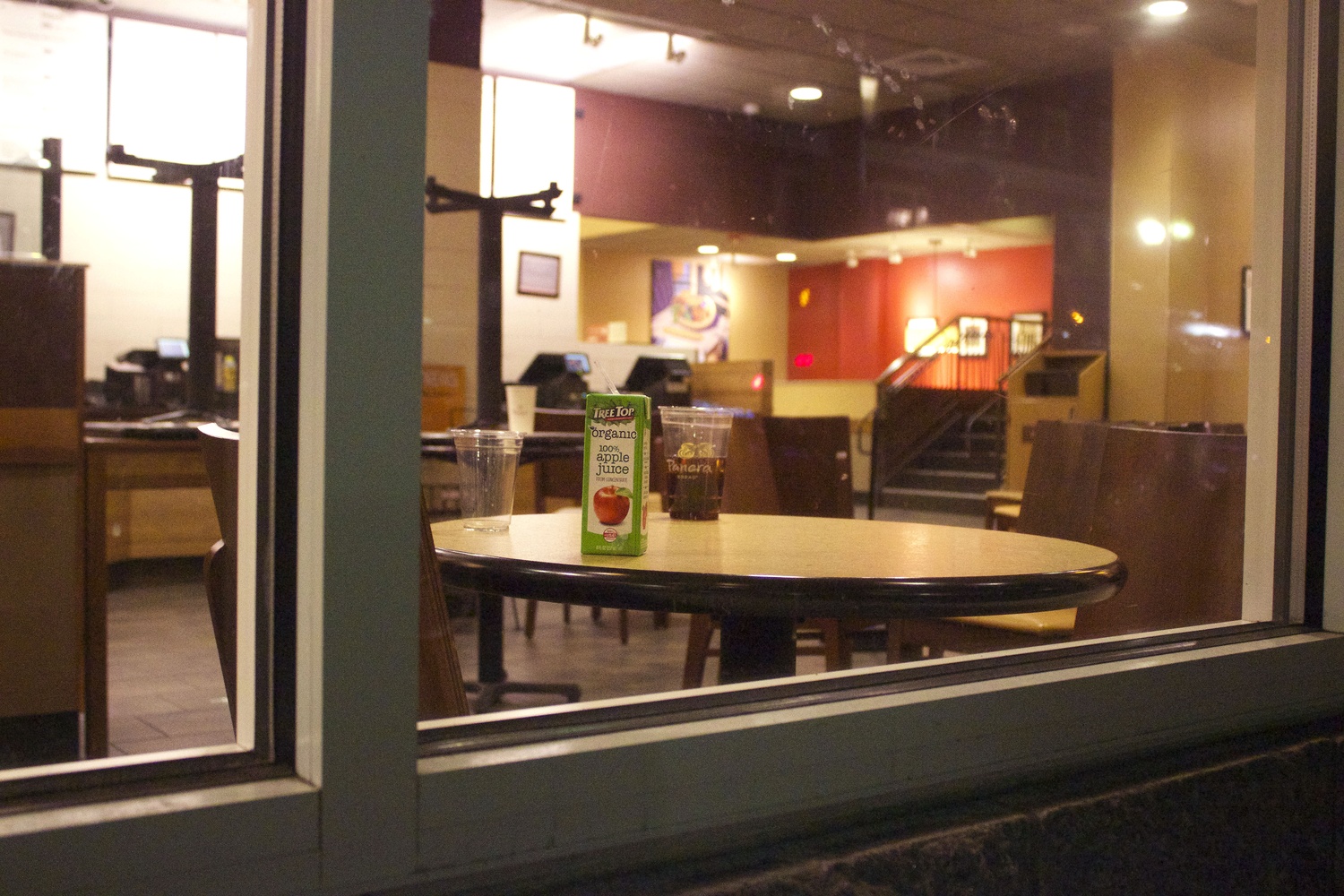 A juicebox and soda sit abandoned on a table after Panera announced that it is closing indefinitely. By Savannah I. Whaley

Panera has occupied the storefront at 1288 Massachusetts Avenue, in the heart of Harvard Square, since it opened its doors in 2012.

Undergraduates were shocked and disappointed to hear the news.

Michael A. Kikukawa ’17 was unaware of Panera’s closing when he ordered dinner through the restaurant’s mobile app. Only after completing his order did Kikukawa realize that it was being fulfilled at Panera’s Porter Square location.

“I was horrified,” Kikukawa said. “I quickly called the restaurant and canceled the order, but spent the next five minutes trying to order a meal at what I thought was Panera's Harvard Square location.”

After giving up and walking over to vegetarian restaurant Clover in defeat, Kikukawa, a Harvard for Hillary member, said the news hit him particularly hard when he remembered he and his friends frequent Panera after every Harvard for Hillary phone bank the group holds.

“I almost cried,” Kikukawa said. “Now what am I going to eat at Harvard for Hillary phone banks every week?”

Other students said they’ll miss the eatery for its warm environment and friendly service. Jacob N. Russell ’19 said it’s a “real bummer” that Panera is closing, and fondly recalled how staff compensated him for a mistaken order.

“One time they accidentally messed up my order, but then they gave me a gift card in return,” Russell said. Russell added that he received a $100 gift card to Panera over the holiday, and regrets he will now never be able to use it at the Harvard Square location.

The bakery-cafe chain offered a wide variety of foods, and featured a “Pick 2” option that allowed students to combine various options into one meal for a reasonable price. However, Brenda M. Chiang ’19 said she will miss Panera’s signature bread bowls the most.

“Where will I get macaroni in a breadbowl now?” Chiang said.

Some students were particularly struck by the lack of prior notice on an otherwise sunny Monday.

“As it stands, my last Panera visit was three days ago, and I would have taken more time to appreciate the meal had I known it were my last,” Halle A. Orr ’16 said. “We can make it through this tragedy. Maybe.”

However, not everyone took the news as a loss. Gaby Germanos ’18 said she was saddened but not surprised to hear of the closing, saying she found staff sometimes unfriendly.