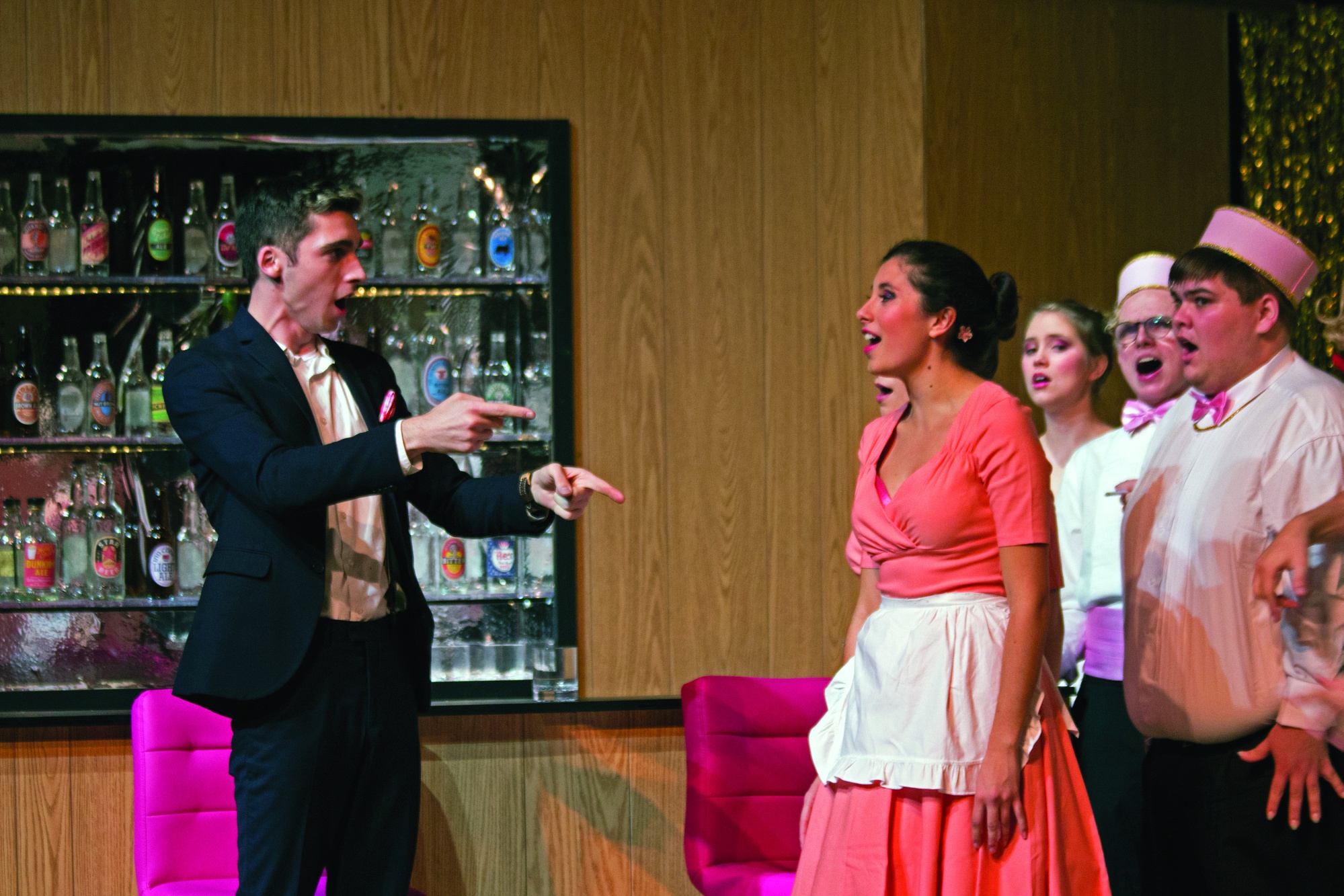 Benjamin D. Grimm ‘18 and Isabella Kopits ‘20 perform in a rehearsal of the Harvard-Radcliffe Gilbert and Sullivan Players’ upcoming production of “The Mikado” on Thursday night.
By Jalin P. Cunningham, Crimson Staff Writer

A group of students is calling for the cancellation of the Harvard-Radcliffe Gilbert and Sullivan Players' show “The Mikado,” sharpening previous criticisms of the play after watching a rehearsal Wednesday.

The students had originally planned a protest of the production’s opening show Friday night, arguing “The Mikado” features exaggerated stereotypes about Japanese culture. But now, after some students attended the Wednesday rehearsal, they are urging the Gilbert and Sullivan Players to shut down the production, claiming that the production does not adequately grapple with how the show historically depicted race and gender. 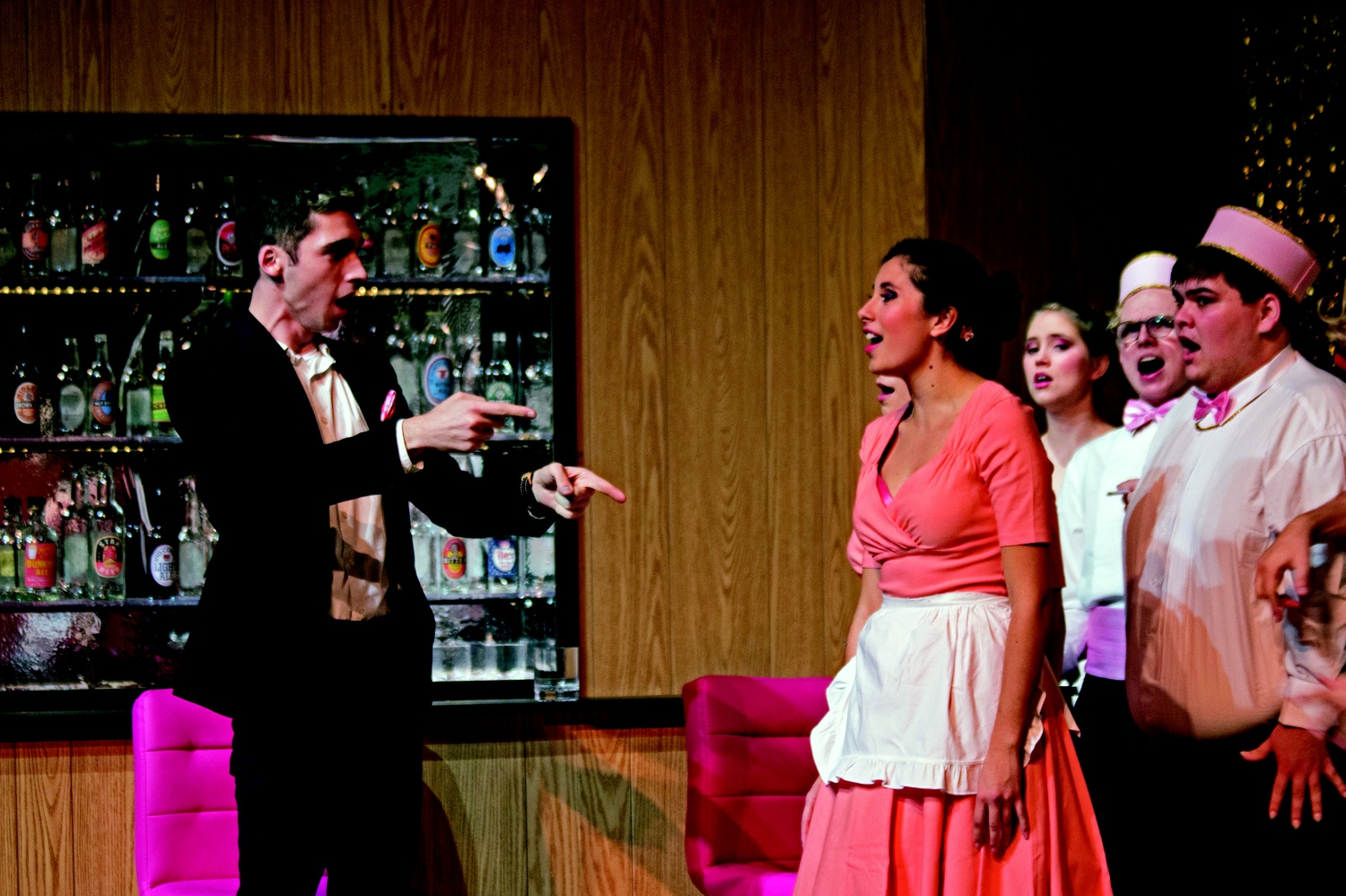 Benjamin D. Grimm ‘18 and Isabella Kopits ‘20 perform in a rehearsal of the Harvard-Radcliffe Gilbert and Sullivan Players’ upcoming production of “The Mikado” on Thursday night. By Thomas W. Franck

In a three-page Google document posted on the Facebook event advertising the protest, George S. Qiao ’18, the event’s main organizer, wrote “it is too late for this show to save itself from propagating the extensive dangerous stereotypes it displays.”

“While in the past I have refrained from pursuing extreme action because I had not yet seen the play, having now watched it and discovered the depths of its potential harm, I now feel comfortable calling for the play to be shut down,” Qiao wrote.

“The Mikado,” a comedic opera written in 1884, is set in a fictional 19th-century Japanese town and features stereotypical and exaggerated depictions of Japanese culture. The play was intended to satirize British political culture and bureaucracy.

Kathleen Zhou ’17, president of the Gilbert and Sullivan Players, said the group still plans to stage the show. Zhou added, however, that she sees some of Qiao’s criticisms as “valid.”

“We have chosen… to work within a problematic framework,” Zhou said. “I don’t think we think it’s perfect.”

The Google document details Qiao’s criticisms of the show, specifically what he characterizes as transphobia and a failure to engage with critical elements of Japanese history.

“[T]he Players seem to have attempted to remove confrontations of race altogether. Japananese (sic) culture isn’t spoken about even once,” Qiao wrote in the document.

Zhou argued that the show portrays Japanese culture in its “aesthetics.” The Gilbert and Sullivan Players’ adapted rendition takes place in a “Las Vegas themed Oriental hotel” and features similar characters and elements as the original.

Qiao said he thought that one traditionally female character, played in the Gilbert and Sullivan production by a male actor, is a transphobic portrayal because of its harmful depiction of transgender femininity.

“[T]he result is something incredibly harmful to perceptions of trans people,” Qiao wrote.

He also lambasted what he considered portrayals of “violence and gendered oppression in the production.” Qiao wrote that, in his opinion, men harass and objectify several female characters in some scenes.

“Like the historical racism in the play, the historical sexism and gender violence also needs to be critically addressed and interrogated. This has been overlooked,” Qiao wrote.

Zhou said that although the show does portray sexism, “there’s a big difference between representing and supporting that.” Rather, Zhou said Gilbert and Sullivan’s rendition of “The Mikado” seeks to bring such issues into the public conscience.

“No production can be perfect,” she said.

The protest of “The Mikado” is scheduled for tomorrow evening outside of Agassiz Theater, 30 minutes before the start of the production. Thirty-nine people indicated on the event’s Facebook page they planned to attend.