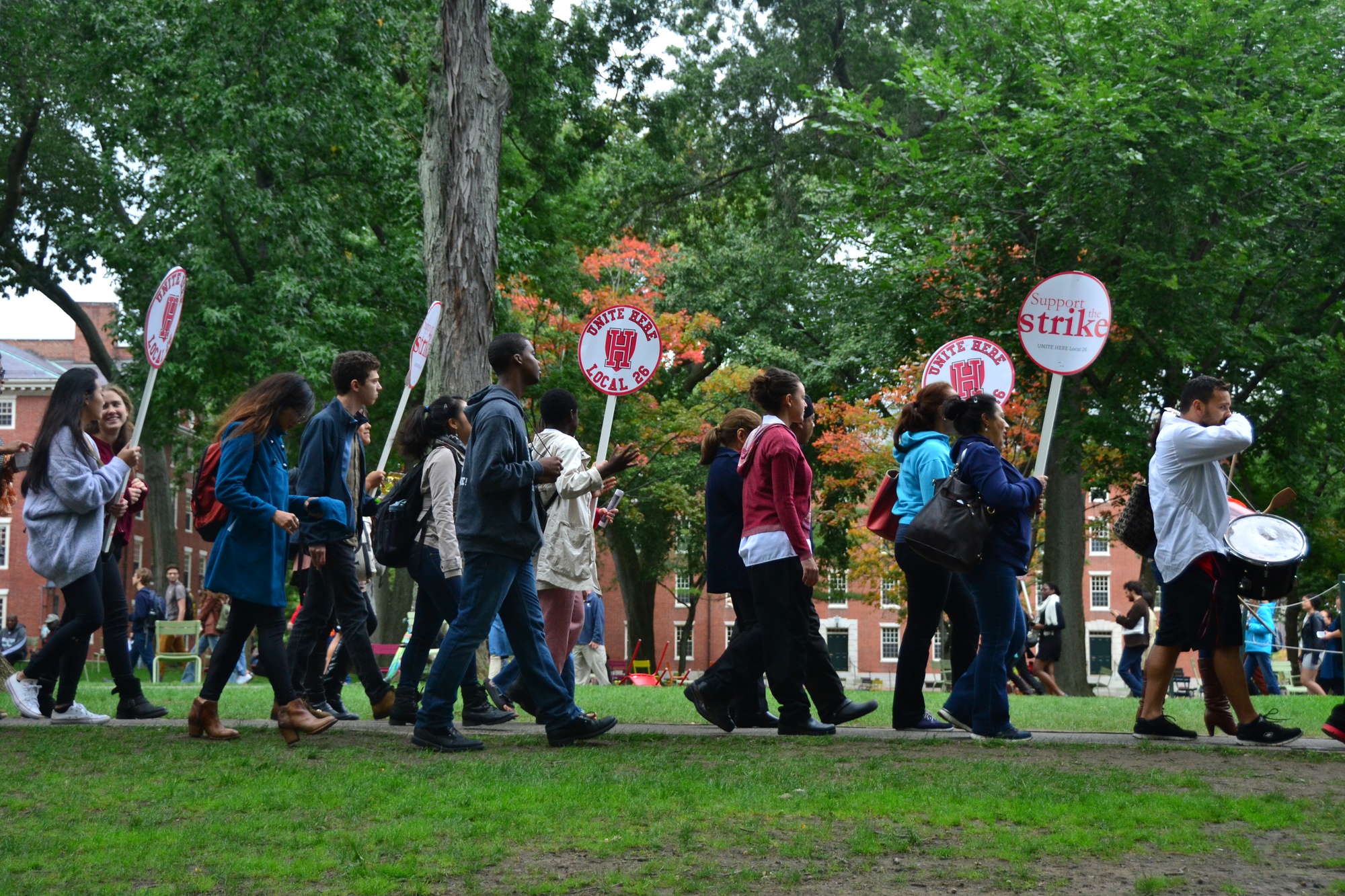 Harvard affiliates and HUDS workers circled Harvard Yard Friday afternoon, marching in support of the decision for HUDS workers to strike next Wednesday if the University does not comply with their requests.
By Brandon J. Dixon, Crimson Staff Writer

Harvard is stockpiling frozen foods in its dining halls ahead of a potential strike by Harvard’s dining services workers, according to workers stationed across cafeterias in the College.

Nine different employees said that they have seen unusually large quantities of frozen food being brought into the dining halls after their union announced in early September its preparedness to strike. HUDS workers have been bargaining with Harvard since May in an effort to hammer out the details of their new contract with the University. 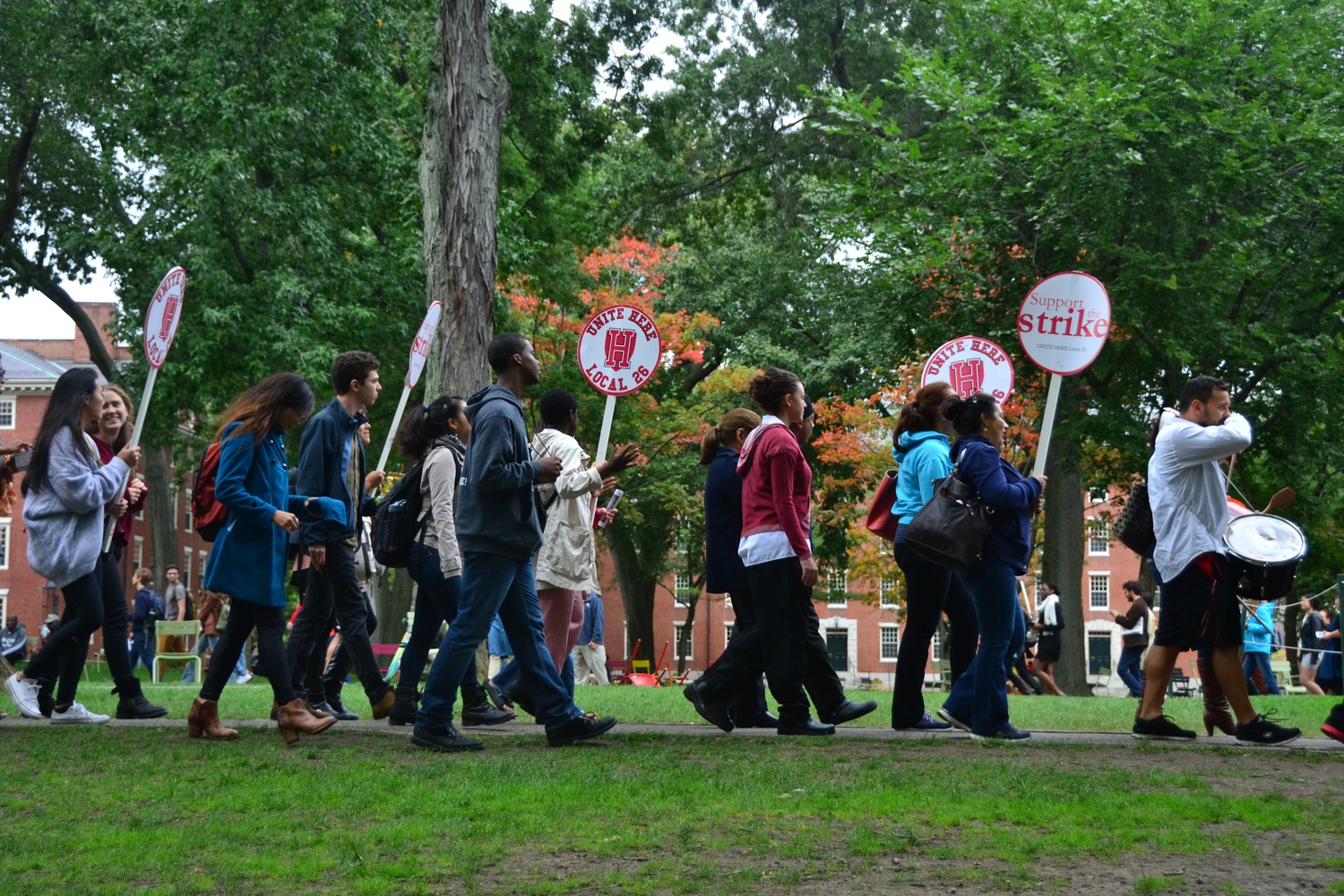 Harvard affiliates and HUDS workers circled Harvard Yard Friday afternoon, marching in support of the decision for HUDS workers to strike next Wednesday if the University does not comply with their requests. By Heather M. Forbes

“Harvard does order some frozen foods on occasion, but nothing like this,” Laquiesha N. Rainey, a HUDS workers and union organizer wrote in an email to The Crimson. “Things like stuffed peppers, mac and cheese, and soups are taking up so much space in the freezers that a lot of halls don’t have the space to hold the current menu items we need.”

Annabel A. Pappas, another HUDS worker stationed in Pforzheimer and Cabot Houses, added that she was concerned that, should the union strike, students will have to eat “unhealthy” frozen entrees instead of food made fresh by dining hall staff.

Though it is unclear exactly how much food Harvard may have in reserves, Robert A. James—a general cook in Quincy House—said that, by his estimates, three days worth of frozen food has been stockpiled in the freezers in his House’s kitchen.

When asked directly about the stockpiling, Harvard University Dining Services spokesperson Crista Martin declined to comment beyond saying that Harvard administrators “remain focused on negotiations, but have a contingency plan in place” in the event of a strike.

The College's Dean of Students Katherine G. O’Dair echoed that sentiment in an email she sent to undergraduates this weekend, writing that “in the event that information needs to be shared regarding changes to your dining service, the College will immediately communicate those details with you through email.”

Harvard’s dining service workers announced on Friday that they intend to strike this Wednesday if a contract settlement is not reached by midnight on Tuesday, marking the culmination of a month of tense negotiations with the University. At their 17th negotiation session on Friday, the two parties continued debating the workers’ health benefits package and wages.

According to a press release from Local 26 spokesperson Tiffany Ten Eyck, HUDS employees will begin picketing at breakfast on Wednesday if they decide to strike.

Should HUDS workers form picket lines Wednesday morning, it will mark the first time in their history of bargaining with the University that they have went on strike during the academic year. The last strike in 1983 occurred during the University’s summer recess.

Harvard has several options if the workers do go on strike. If past dining worker strikes at peer institutions like Yale are any guide, Harvard may elect to provide vouchers to undergraduates to dine at local eateries. The University could also hire temporary workers to staff dining halls.

Ten Eyck said workers were concerned about how their strike may affect students across the University.

“They believe in cooking,” Ten Eyck said. “How this will affect the students has been at the center of every decision they’ve made about the strike.”

Ahead of the strike deadline, Harvard’s dining workers have received an outpouring of student support from across Harvard’s many campuses. A rally last week in Harvard Yard drew over 400 Harvard affiliates.

—Michael E. Xie and Dianne Lee contributed to the reporting of this story.