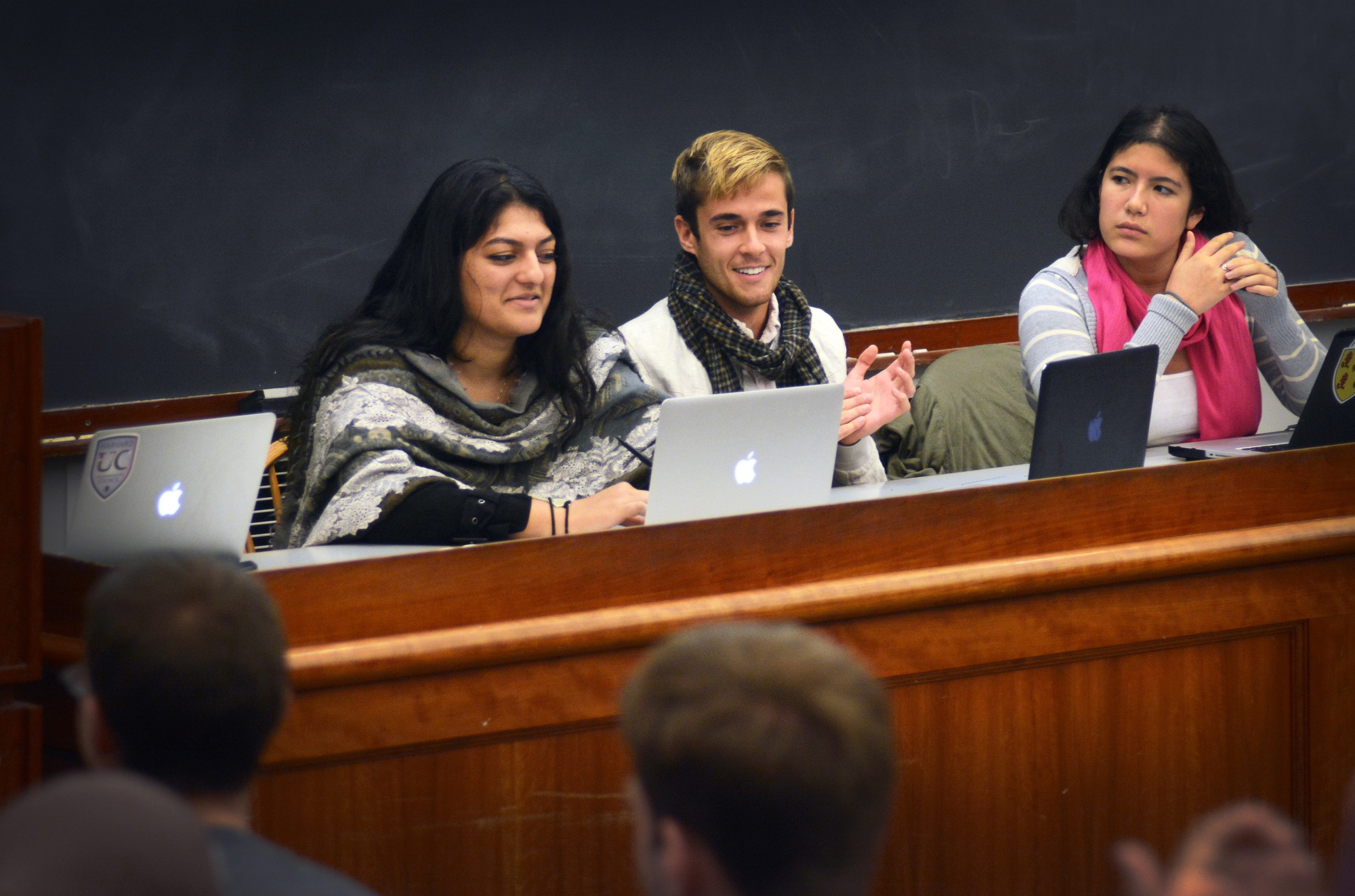 Shaiba Rather '17 and Daniel V. Banks '17 lead a debate at the Undergraduate Council council meeting Sunday night about whether the UC should endorse HUDS workers in the upcoming strike. The UC ultimately voted in favor of support.
By Brian P. Yu, Crimson Staff Writer

The Undergraduate Council voted 45-3 Sunday to endorse Harvard University Dining Services workers in their intent to strike should they not reach an agreement with the University over contract negotiations.

The endorsement comes a few days after UNITE HERE Local 26, the Boston-based union that represents Harvard’s dining workers, announced that HUDS employees would strike beginning Wednesday if a “fair agreement” with the University is not reached by the night before. 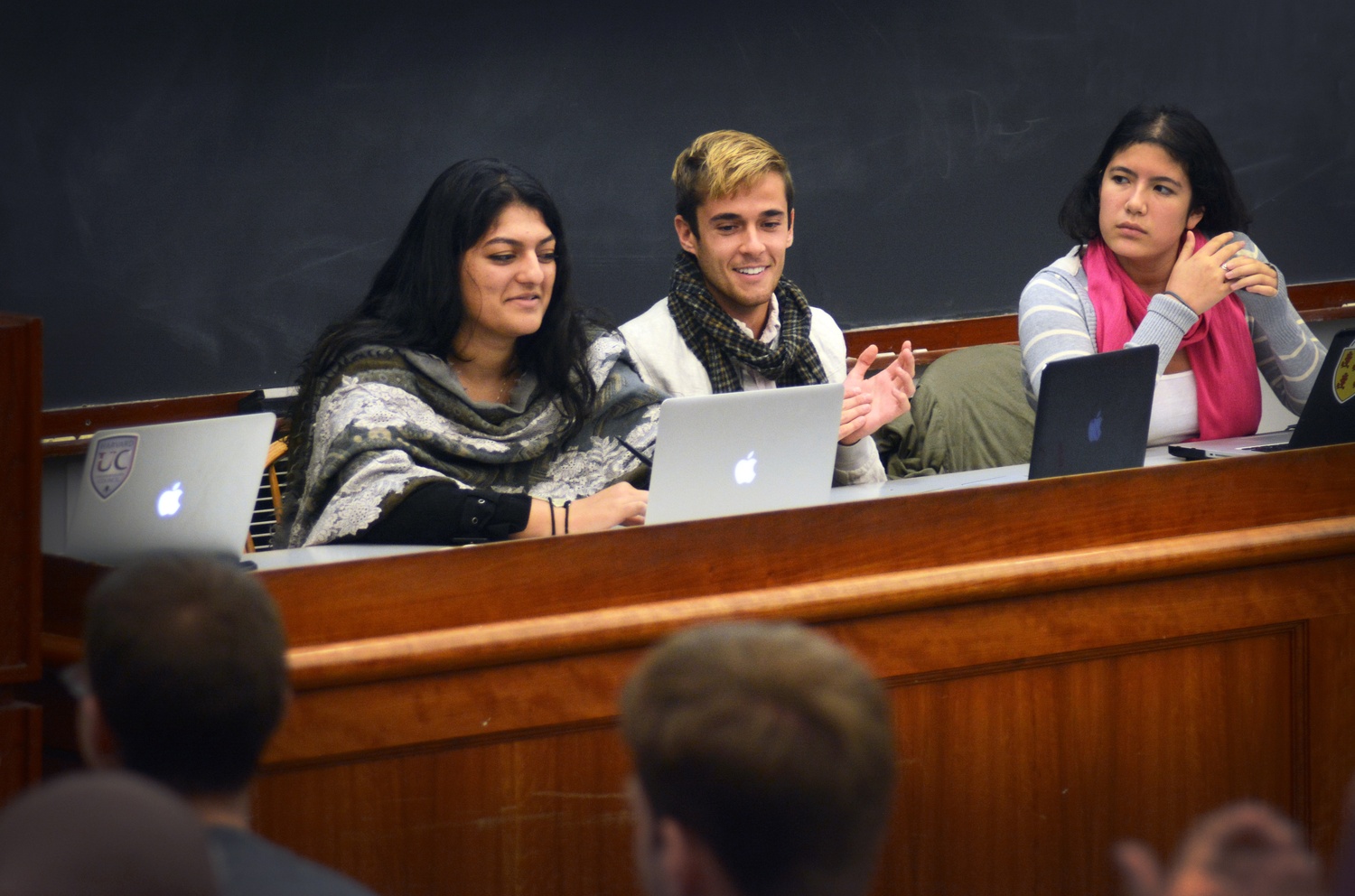 Shaiba Rather '17 and Daniel V. Banks '17 lead a debate at the Undergraduate Council council meeting Sunday night about whether the UC should endorse HUDS workers in the upcoming strike. The UC ultimately voted in favor of support. By Annie E. Schugart

“HUDS workers are members of this community. As a UC body, we are elected to improve the lives of everyone in our community,” Student Life Committee Chair Berkeley Brown ’18 said.

The UC’s vote was preceded by several rounds of contentious debate. Some representatives expressed concern that the Council was not adequately informed on both sides of the issue. Representatives from Harvard Student Labor Action Movement—a student group that supports HUDS—attended Sunday’s meeting, but some UC members noted that just one perspective may be insufficient.

“We have only heard one side of the story here,” Mather House representative Nicholas D. Boucher ’19, who ultimately voted against the endorsement, said. “We didn't have a representative from the University. We didn't technically hear from them.”

UC President Shaiba Rather ’17 said that although the Council tried to bring in a representative from the University to speak at the UC’s general meeting, schedule conflicts prevented that from happening.

UC Vice President Daniel V. Banks ’17 acknowledged Boucher’s concerns, and cautioned the Council against voting without all of the facts.

“We have had only one group come present to us,” Banks said. “We shouldn't be voting based on our guts, we should be informed on both sides.”

Representatives from HUDS and the University have been in tense contracts talks since mid-June. Early last month, HUDS workers voted overwhelmingly to support a strike should the University not comply with their demands—increased wages and health benefits different than the proposed benefits, which would create lower salary tiers for premiums but increase copayments. Harvard, in turn, has proposed a 10 percent increase in hourly wages over five years, and points out that HUDS workers’ wages are, on average, higher than other food service workers’ wages in the region.

UC representatives also argued over the impact a potential strike would have on undergraduates. The University has indicated it has a “contingency plan” should HUDS strike, but spokespeople have not specified the details of that plan.

“Our main prerogative is towards the students who elected us to serve them,” Education Committee Chair Scott Ely ’18 said. “I'm failing to see how supporting this and endorsing this is helping the student body.”

“When students don't know where their next meal is going to come from... that's going to create a lot of uncertainty,” Ely, who ultimately voted in favor of endorsement, added.

The UC will release an open letter expressing support for HUDS workers by Wednesday.

The Council also unanimously voted in favor of an amendment to the grants allocation, proposed by Boucher, who has served on the committee since last spring. The amendment allocated $2,107 to TEDxHarvardCollege, an organization which was denied UC funding last week due to concerns about the group’s finances.

Boucher conducted an audit of the organization’s expenditures last week, and concluded that the group did qualify for UC funding.

At the start of Sunday’s meeting, Native Americans at Harvard College President Damon J. Clark ’17 presented a memo to the Council urging the UC to support “the initiative for Harvard University to officially recognize the second Monday of October as ‘Indigenous People’s Day.’”

“I think just recognizing our history is something we really want to address,” Clark said. “We'd like to address this and talk to administrators.”

The Rules Committee will consider Clark’s petition for UC endorsement later this week before the proposal goes to a full Council vote, according to Rules Committee chair Cameron K. Khansarinia ’18

During the meeting, Rather announced that Currier House representative Ziyad J. McLean ’18 will serve as the Council’s new Parliamentarian.

The following representatives voted in favor of the endorsement:

The following representatives voted against endorsement:

The following representatives were not present for the vote: