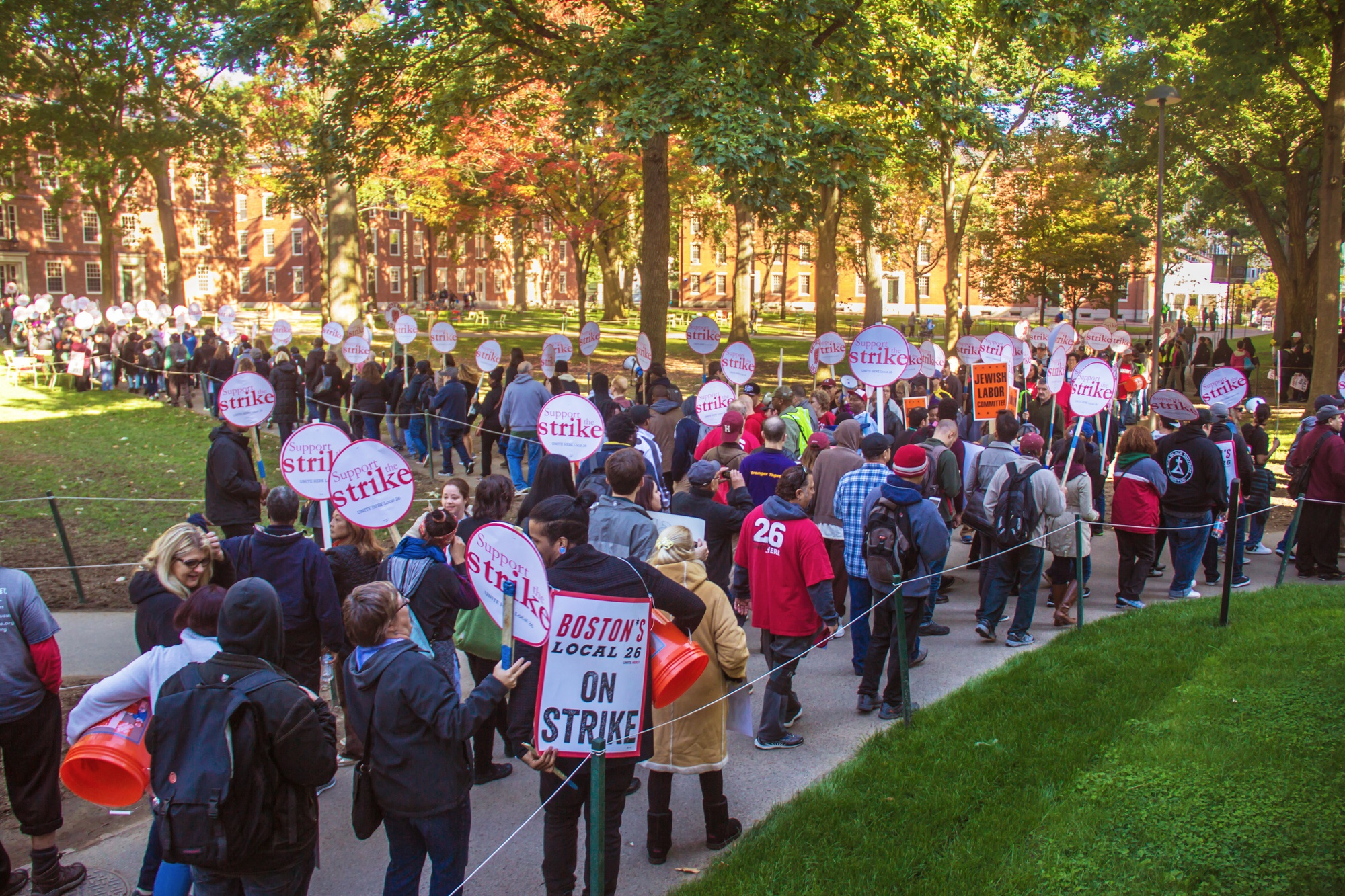 Dillon J. Dunteman ’19 was fast asleep in Eliot House when he awoke at 5:45 a.m. to beating drums, blaring sirens, and chants of “No healthcare, no peace!” coming from JFK St. Harvard University Dining Services workers had gathered outside Eliot to picket as they launched the first day of their historic strike.

Protests began around 6 a.m. across campus, with strikers gathering outside upperclassman Houses to shout slogans, beat drums, and blare sirens. While some students joined the workers in the wee hours of the morning, many said they were not pleased by the early wake-up call. 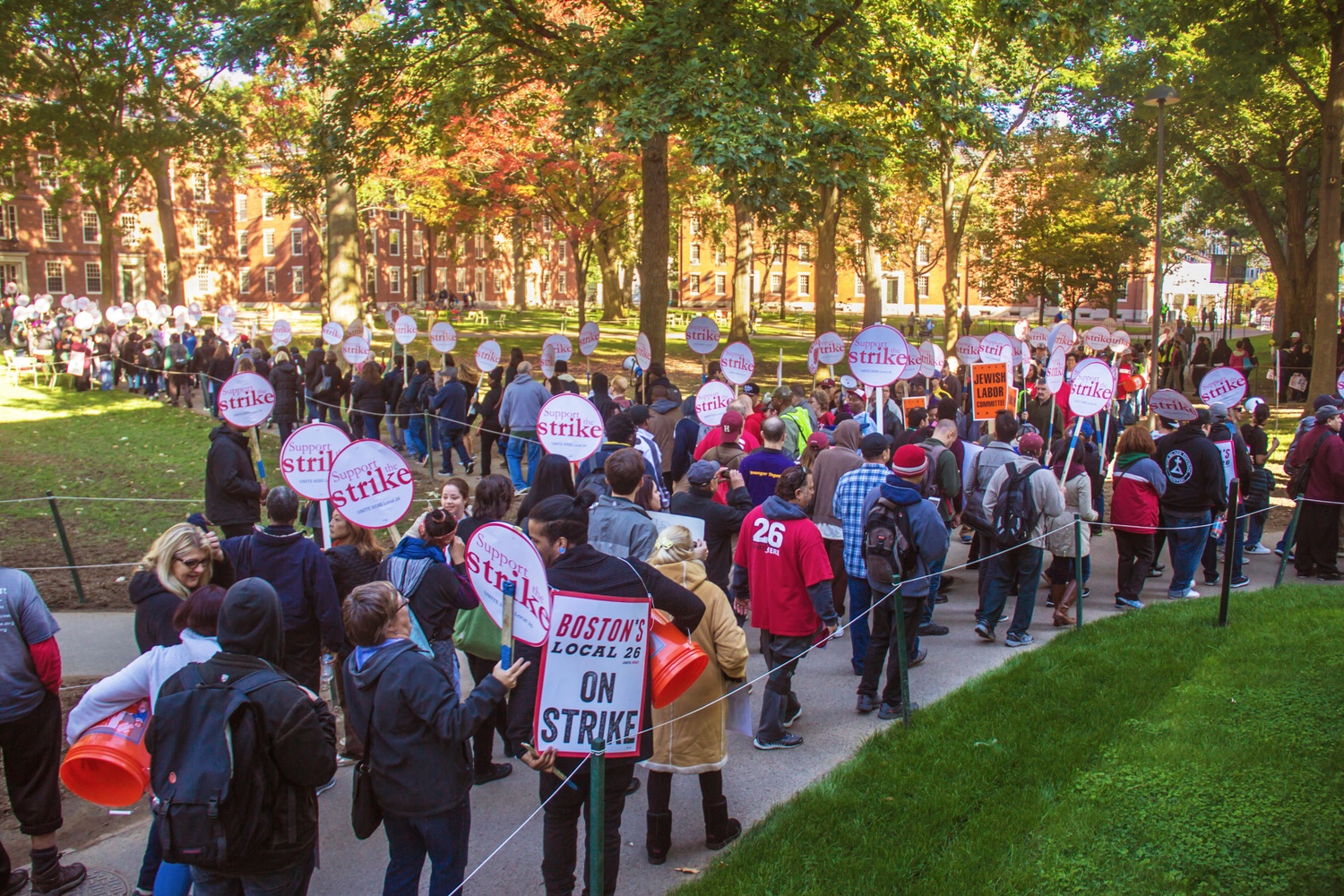 “I don’t get why they have to protest directly outside of the Houses,” Dunteman said. “You’re basically hurting the students who went out and endorsed you—the Undergraduate Council endorsed the strike—and you’re waking them up in the middle of midterms.”

He added he did support the strike, but that he thought it would have been better for protesters to have rallied at central locations on campus, rather than dorms, that early in the morning.

HUDS workers planned to picket at 16 different locations on campus throughout the day on Wednesday, including in front of dining halls and around Harvard Yard. The strike marks the first time dining workers have ever walked off the job during the academic year, and the first HUDS walkout Harvard has seen since 1983, according to Brian Lang, the president of UNITE HERE Local 26, the Boston-based labor union that represents HUDS.

Margaret-Ann Simonetta, a student at the Extension School, also expressed irritation with the strike’s timing. She said she was studying in Lamont Library around 10 a.m. when protesters began circling outside, distracting students working in the building.

“I was trying to get through one of my take-home midterms, and it was just like blaring sounds, everybody was screaming,” she said. “Don’t get me wrong, I’m all for people’s protests, but when it gets in the way of my academics it kinda irks me a bit.”

With midterm season in full swing, students characterized the strike’s taking place in the middle of a stressful academic period as unwelcome. Emma M. Orcutt ’19 said the strike complicated the exam she was scheduled to take Wednesday, adding that walking through picket lines in the Yard en route to a midterm was “a really weird experience.”

When the exam began, Orcutt said, she could still hear people chanting outside the window. Though the situation was far from “ideal,” neither she nor fellow students could do anything about it, she said.

Other students said the strike had little impact on their daily activities, especially on their dining experience. The dining halls of Cabot, Dunster, and Kirkland Houses closed Wednesday morning for the duration of the strike. The remaining dining halls on campus remained open but operated with a skeleton staff of managers, re-assigned Harvard staff, and 15 temporary workers hired as last-minute replacements by the University.

While dining in Annenberg, the freshman dining hall, around 8 a.m. on Wednesday, Parker Lombardo ’20 and Sierra Moore ’20 both said they felt relatively unaffected by the strike and were supportive of HUDS workers’ position. Lombardo added that, if he had to eat “bagels and muffins” instead of “the elaborate lay of eggs and hashbrowns” HUDS usually provides, that was “fine with me.”

Still other students said the strike interrupted their normal Wednesday schedule, but laid the blame squarely on Harvard, not on HUDS workers. Samara K. Ford ’18 was awakened by workers’ protests around 5:45 a.m., and promptly decided to join the picket line at 6 a.m.

“[It] made me feel annoyed with Harvard administration for pushing the workers to the point of a strike,” Ford wrote in an email. “Sure, I did not plan this into my study time, but I believe being a Harvard student means a lot more than just how much time I spend doing homework.

“It’s about being a loyal member of this community and supporting those who make my daily routine possible in the first place,” she added.

Kennedy School professor Timothy P. McCarthy ’93 and Arabic teaching fellow W. Sasson Chahanovich both said they altered their classes’ Wednesday curricula to include a discussion of the HUDS strike. Chahanovich, who teaches a second-level intermediate Arabic class, said he asked students questions about the strike to help them practice their Arabic vocabulary and to make them aware of what was going on.

McCarthy said he chose to bring up the strike in his class, Culture and Belief 49: “American Protest Literature from Tom Paine to Tupac,” both because it was relevant to the theme of the class and because he felt morally obligated to do so.

He added that he also had a more personal motivation to foster student awareness and support of the strike. McCarthy has lived in Quincy for over 20 years—first as an undergraduate, then as a senior resident tutor, and now as a faculty affiliate. During this time, he said, he has gotten to know Quincy’s dining hall workers very well.

“There were people on the picket line today who also provided me with my own nourishment as an undergraduate,” he said. “I feel an additional drive to support people who supported me when I was just a kid.”