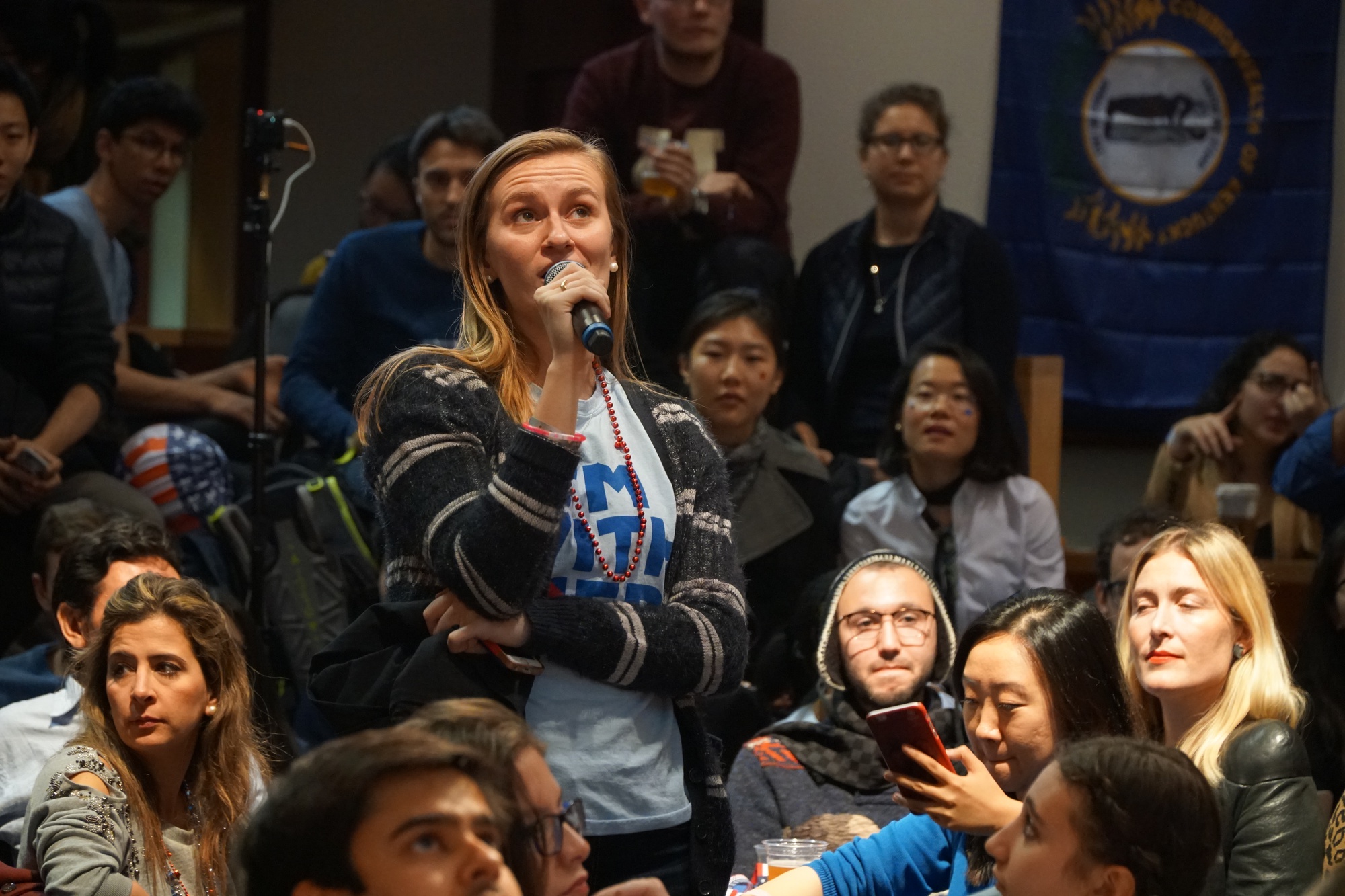 Caroline M. Tervo ’18 asks a question at the IOP election night watch party on Tuesday. The celebration ended at midnight without the planned balloon drop and declaration of victory expected by students and other attendees.
By Hannah Natanson, Crimson Staff Writer

Harvard Yard was quiet Wednesday afternoon as students, tired from staying up late to watch the unexpected victory of Donald Trump, walked to and from class. 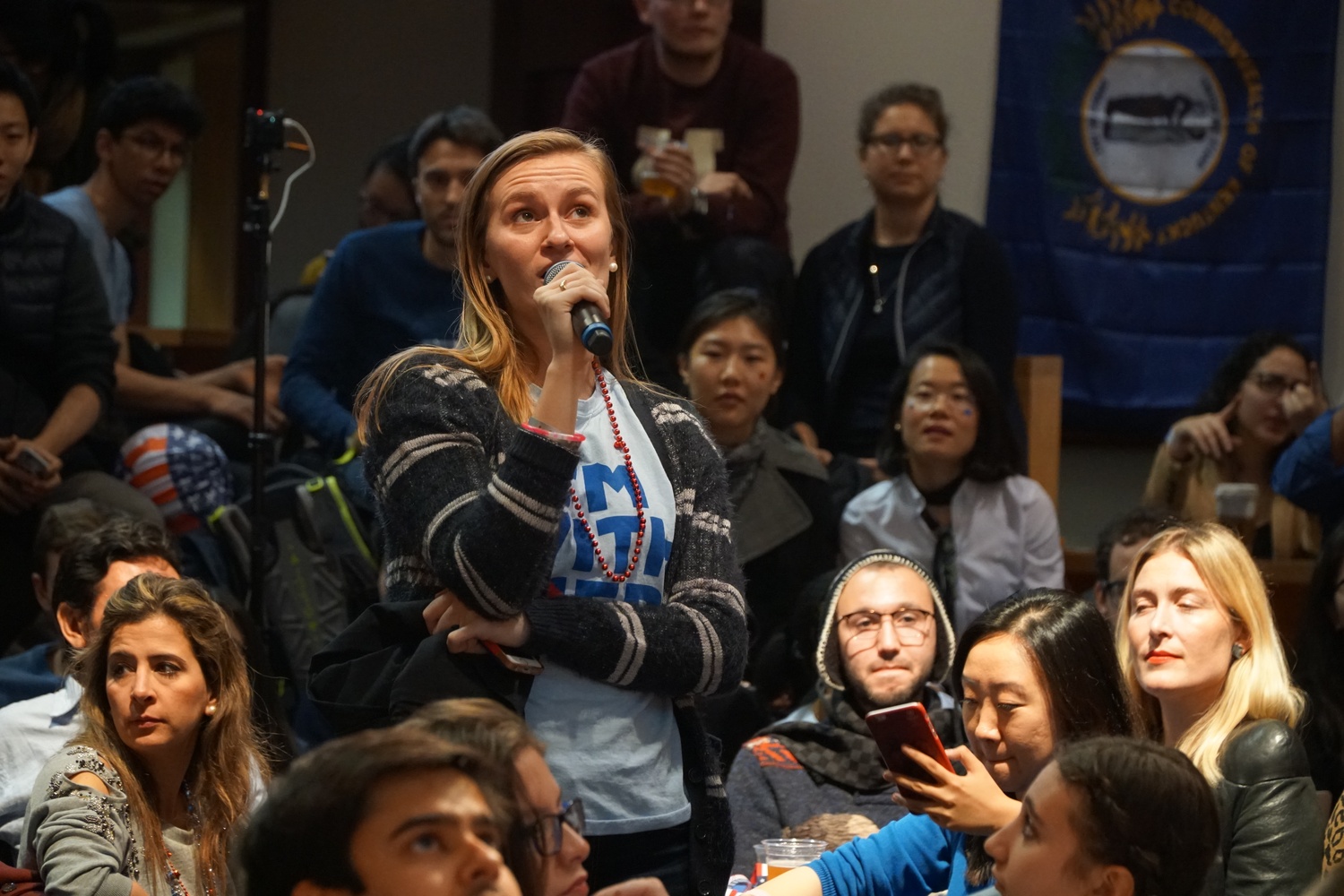 Caroline M. Tervo ’18 asks a question at the IOP election night watch party on Tuesday. The celebration ended at midnight without the planned balloon drop and declaration of victory expected by students and other attendees. By Jessica M. Wang

“I feel like it’s a nightmare that’s just come true,” Sophie C. DiCara ’20 said as she passed University Hall. “I’m constantly pinching myself. I feel really alienated from the rest of America–who are these people, that elected someone that is atrocious in every way?”

“I’m just surprised that this would happen and that someone like that would be elected our next president,” Frances H. Lee ’20 said, huddling in her jacket. “I don’t see how someone like him could lead a country like this… everything that we’ve come so far to accomplish has now been set back so many years.”

“Words are difficult to express,” Connor McRobert ’20 said. “It’s really hitting me that this man has been elected… it will certainly affect the lives that he’s marginalized and the identities that he’s stripped throughout this election.”

Over the course of Trump’s controversial campaign, the political outsider’s rhetoric was often polarizing. He promised to ban Muslims from entering the country and to deport millions of undocumented immigrants, and in his June 2015 speech announcing his intent to run called Mexicans “rapists.”

Dean of the College Rakesh Khurana wrote in an email to undergraduates that the election had been “particularly difficult and divisive” and that he was aware many students were “worried” about what Trump’s victory could mean for themselves and their families.

“I also know there are others who genuinely see this election as a moment of positive change,” he wrote. “In spite of our differences, we can only move forward as friends, neighbors, and classmates if we develop the capacity to understand and empathize with each other.”

Khurana concluded his message by inviting students to share their thoughts about the election results during an “open Dean’s Office” late Friday afternoon. Dean of Students Katherine G. O’Dair also sent an email to undergraduates, in which she provided a number of post-election events and conversations.

“Our conversations matter, so come to tea, come to community dinner tomorrow, linger at night in the D hall, talk to one another and to your tutors and to us,” wrote Lowell Faculty deans Diana L. Eck and Dorothy A. Austin. “We are here for you and for the community we share.”

Alexander J. Cullen ’18, one of a handful of Trump supporters at Harvard, said he was aware that the majority of the student body was distressed by the election’s results, though he himself was “pleasantly surprised” by Trump’s win.

“The mood on campus has been very depressing,” he said. “I’ve tried to respect people feeling bitter about it. That’s kind of made me more guarded to say super pro-Trump things.”

Some students specifically expressed concern at how Trump’s administration would treat immigrants and undocumented students. Ruben E. Reyes ’19, an active Crimson editorial editor, staged a one-man protest to draw attention to Harvard’s undocumented students. Reyes, whose parents were born in El Salvador, wrapped himself in a Salvadorean flag and, holding a sign that read ‘This is my country too!’ sat on the lap of the John Harvard statue for 15 minutes before Harvard University Police Department officers asked him to leave.

“I know a lot of people who are going to be affected personally, and I suffer with them,” Angerbjorn said.

McRobert said he was determined to move forward despite the gloomy campus atmosphere.

“Someone in the group chat for the Class of 2020 said, ‘We can’t let these moments strip us of the weight of our destiny,’” McRobert said. “We have to be the adults that we once admired and held in high esteem.”