On Harvard’s Campus, Supporters for Trump are Scarce but Resolute 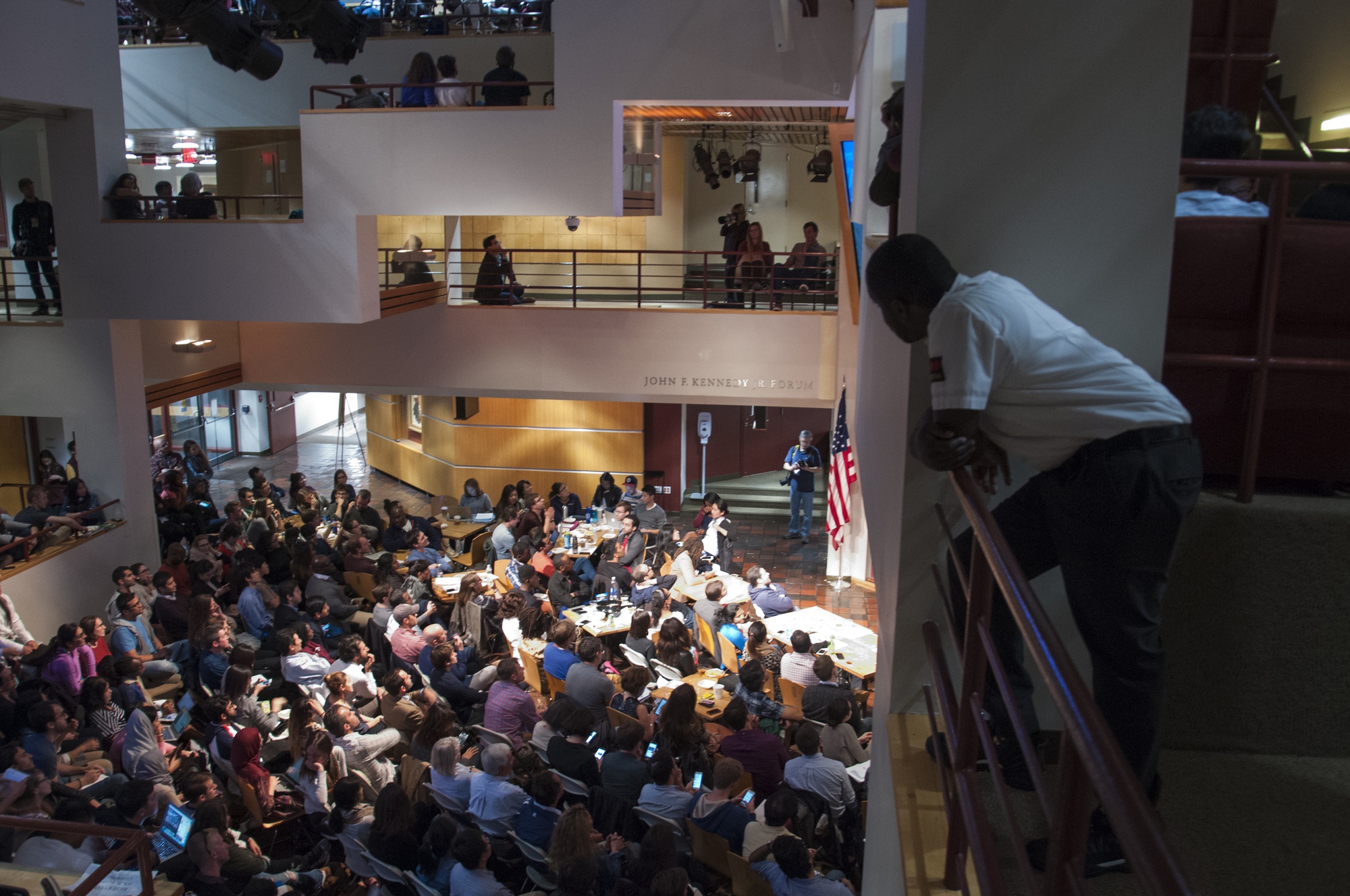 The sights inside Harvard’s Institute of Politics during the first presidential debate of the 2016 general election.
By Derek G. Xiao, Crimson Staff Writer

Being a Republican at Harvard has historically been difficult, but supporting Donald J. Trump may give a whole new meaning to the phrase “the elephant in the room.”

As the populist appeal of the Republican presidential nominee burned its way through the nation this past year, some students in the ivory tower at Harvard have felt the heat of his message, too. Just don’t expect them to walk around wearing “Make America Great Again” hats. 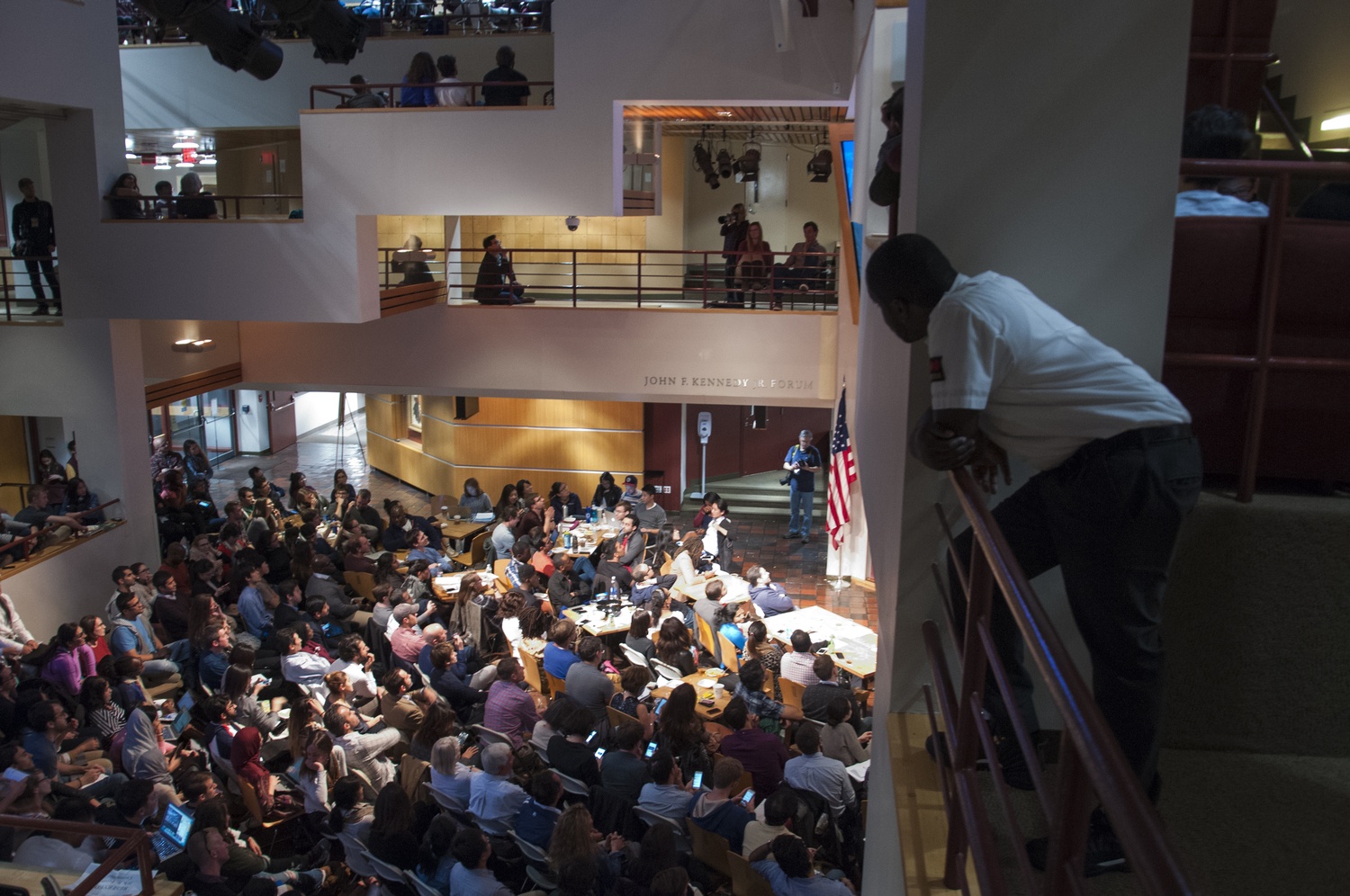 The sights inside Harvard’s Institute of Politics during the first presidential debate of the 2016 general election. By Thomas W. Franck

Surrounded mostly by liberal-minded peers and abandoned politically by the Harvard Republican Club, which took the unprecedented step of publicly denouncing its own Party’s standard-bearer as “a threat to the survival of the Republic” in August, a small number of undergraduates still count themselves as Trump supporters.

Overwhelmingly in the minority, some pro-Trump students have shied from speaking openly about their political preference.

“If someone asks who I am voting for, I have no problem telling them Trump, but I’m not about to put a ‘Make America Great Again’ sticker on my Macbook," said Republican Club member Luke K. Kelly ’19.

A straw poll sent out to members of the Harvard Republican Club this summer found a comparably small minority—12 percent of respondents—said they supported Trump, compared to 20 percent who supported Democratic nominee Hillary R. Clinton and 36 percent who supported Libertarian Party nominee Gary E. Johnson. Roughly 50 club members indicated their preferences in the poll, according to Alexander J. Cullen ’18, the Republican Club’s secretary.

The Republican Club also took the extraordinary step of condemning Trump in a statement, writing that the candidate was “poisoning our country and our children” The denouncement drew widespread attention from the likes of The Washington Post and CNN.

Still, some Trump supporters remain resolute in their support for Trump. Cullen said that he has not felt silenced when it come to expressing his political views, and even wrote an op-ed in The Crimson entitled “In Defense of Donald Trump.”

“It hasn’t been oppressive or anything,” Cullen said. “But it has been a little tough to speak out at times, especially as the only [Republican Club] board member who supports Trump.”

Others, though, have chosen to keep their political preferences to themselves. One Trump supporter declined to comment for this article, citing a discomfort with publicly expressing political opinions. Thayer D. Wade, who is currently taking off what would be his senior fall to work as a field representative for the Trump campaign in New Hampshire, did not respond to multiple requests for comment.

Trump supporters on Harvard's campus are greatly outnumbered. In The Crimson’s survey of the College’s incoming Class of 2020, just six percent of respondents said they planned on voting for Trump in the November’s election, compared to 80 percent who planned to vote for Clinton. A 2012 Crimson election survey of undergraduate and graduate students found 17 percent of respondents planned on voting for Republican nominee Mitt Romney.

In fact, Republican Club President Declan P. Garvey ’17 said that the club has “no qualms” with its members crossing the aisle this election to vote for Clinton, who they might see as “the lesser of two evils.”

“I’m registered in Illinois—not a swing state—so I feel comfortable voting third-party,” added Garvey. “But if I were registered in a swing state like Florida or Colorado or Ohio, I would very likely vote for Hillary Clinton–which is a testament to just how dangerous I believe Donald Trump to be, given the many misgivings I have with Hillary Clinton and her candidacy.”

Still, Cullen and Kelly defended Trump—even on some of his more controversial policies and remarks.

“Trump believes in the greatness of this country and the boundless potential of the American people,” Cullen said. “And that’s always the general premise I start off with in explaining why I support Trump—his policies flow out of his care for his people.”

At the same time, however, both conceded that Trump is not without his faults. Particularly in light of recently unearthed footage which showed Trump making extremely lewd comments in 2005 about groping and trying to have sex with women, Cullen said the incident, “definitely made me think. I don’t in any way excuse remarks like that, since they contradict how I strive to treat women.”

However, “still standing by Trump through this scrutiny,” he contrasted Trump’s response to the scandal with Clinton’s reaction to her own email controversy.

“Trump confronted the footage, saying he was not proud of it, and that he will be a better man from this day forward,” Cullen said. “With Clinton, I have not seen the same forthright apology regarding the email scandal, which in fact is much more costly than Trump’s video.”

Focusing in on Clinton in particular, both supporters warned the alternative to a Trump presidency could be much worse.

“Is [Trump] a perfect candidate? By no means,” Kelly said. “But he is the best option we’re left with to turn the tide of Obama’s failed policies.”

While Trump and his supporters have complained about how the media has treated the candidate, Kelly said the narrative that paints Trump’s followers as “deplorables” misses a core tenet of his appeal.

“It is easy for the media to supply the narrative that Trump supporters are racist, xenophobic, or ‘deplorable,’ but they are ignoring the very real struggles that many Americans have, which have been caused by Obama and will only continue under Clinton,” Kelly said.

Further diving into the specifics of a laundry list of policy issues, Cullen said he was encouraged to see that Trump intended to strengthen the U.S. military, stem illegal immigration, and bring jobs back to America.

Neither were shy about addressing Trump’s critics either.

“A lot of people have labeled him as anti-Hispanic, or anti-Muslim,” Cullen said.

“People are quick to make fun of the Skittles,” he added, referring to a Twitter post in which Donald Trump, Jr. compared Syrian refugees to a bowl of Skittles sprinkled with a few that “would kill you.”

“I don’t know why you would use candy, but there is some truth to the argument,” he said. “If there is a small percentage of fundamentalist Islamists that could get into our country and initiate some sort of attack, then it makes sense to implement a stricter vetting process.”

As the Harvard Republican Club moves away from Trump and focuses on down-ballot races, Cullen said he thought the club was making a strategic mistake.

“I reserve the utmost respect for the other board members of the [Harvard Republican Club],” Cullen said. “But their decision not to endorse Trump was overly far-sighted. Their philosophy is to regroup and try again in 2020—that underestimates the damage a Clinton presidency could do to our country.”