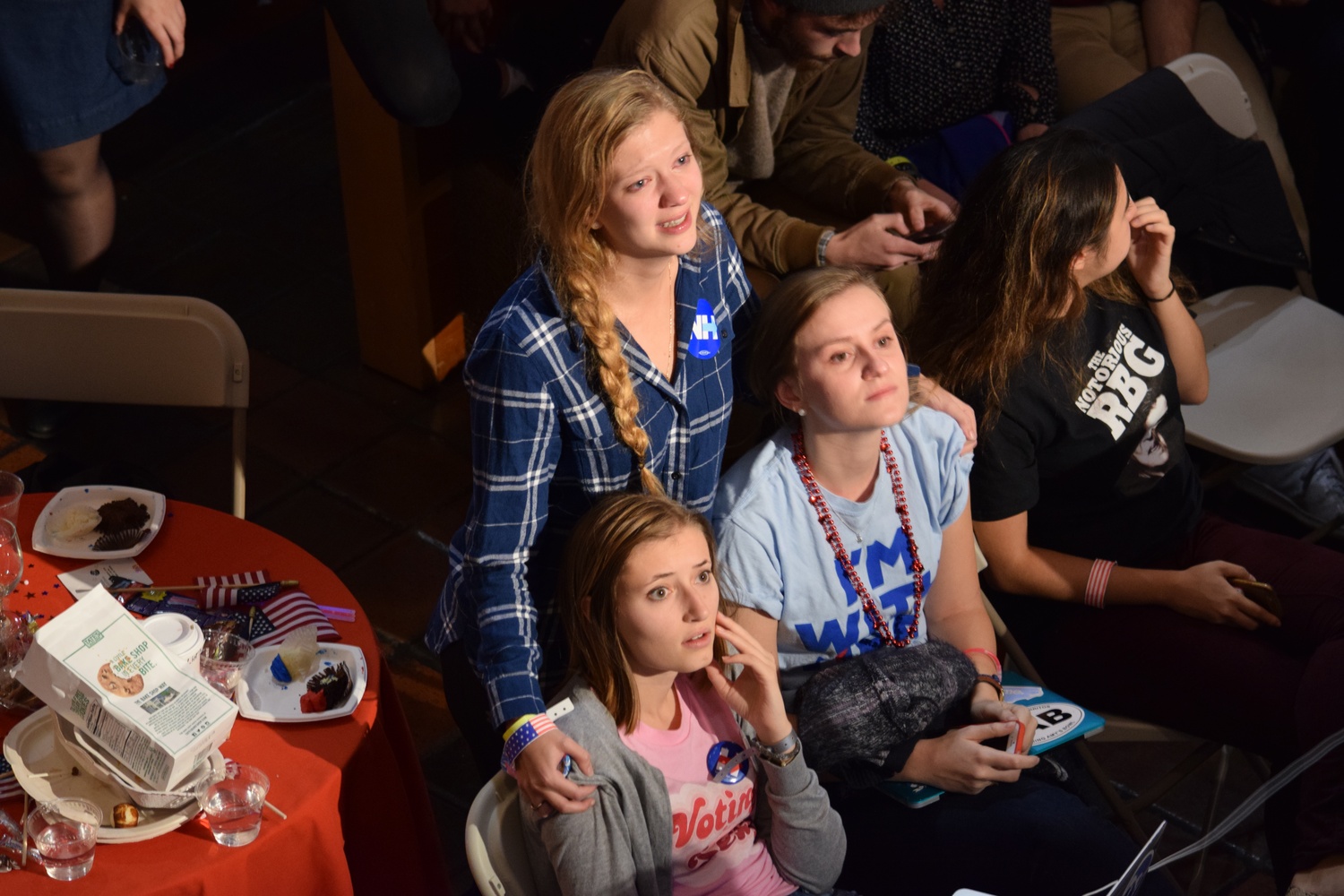 As the night wore on Tuesday with a Donald Trump presidency ever more likely, Harvard students watching the electoral results trickle in slowly grew silent. It seemed their overwhelming favorite for the nation’s highest office, Hillary Clinton, would not take the White House.

“I’d say it’s pretty stressful right now. Everyone is pretty stressed,” Amie Garcia ’19, who was watching the results of the presidential election results in Quincy House, said Tuesday night. “There’s a lot of hope, but that is slowly dying.”

Students crowded in dining halls, in dorms, and at the Institute of Politics on Election Day Tuesday evening to watch the long-awaited close of an unprecedented and divisive presidential campaign. The race was not called until about 2:30 a.m.—long after many watch parties had shut down—and Clinton conceded shortly thereafter.

The mood at the IOP’s JFK Jr. Forum, which opened at 8 p.m. for a campus-wide watch party, was initially celebratory, but that mood dampened as Trump gained momentum. The event ended at 12 a.m. without a balloon drop, which traditionally occurs regardless of an election’s outcome once a winner is announced. 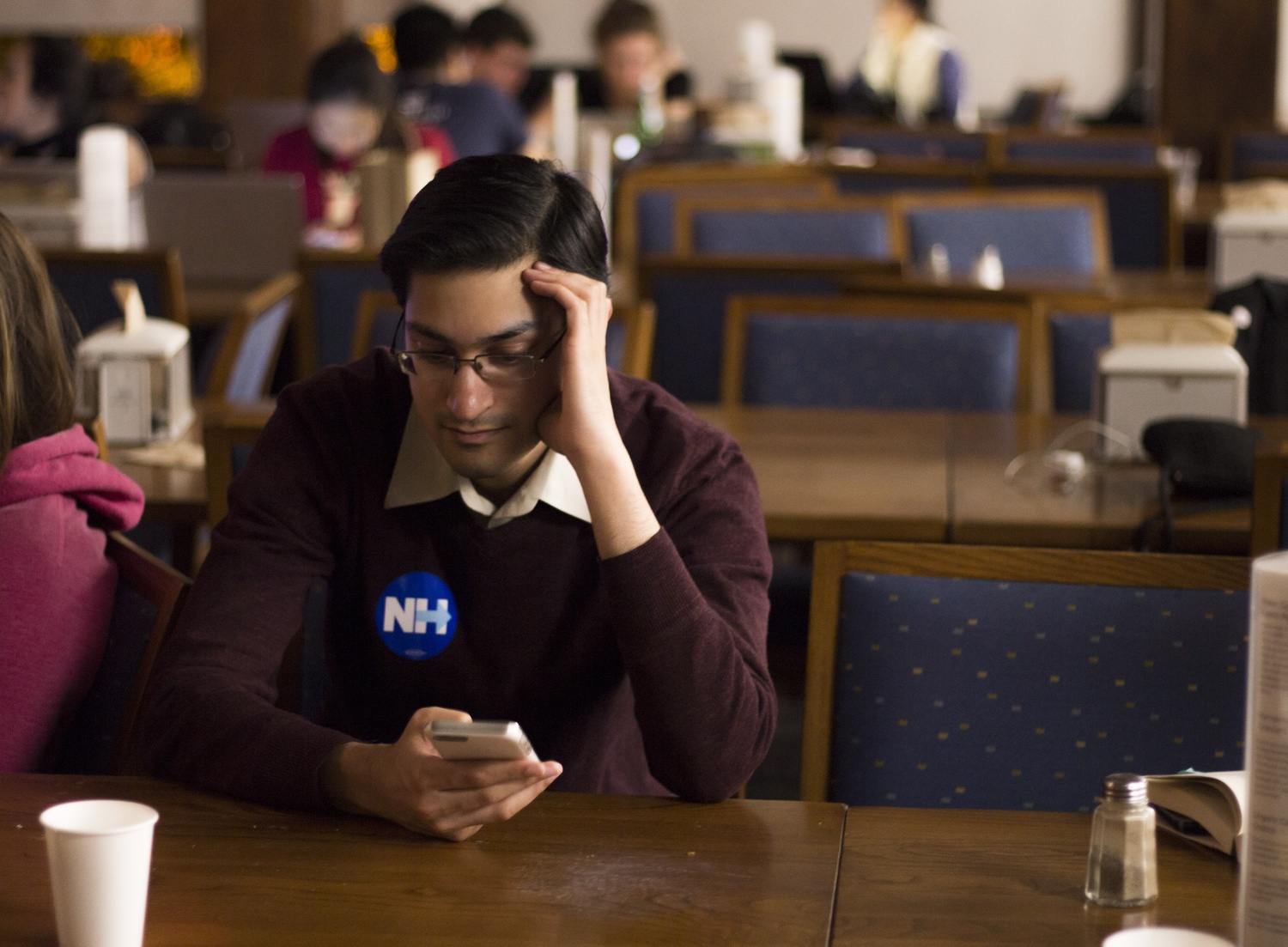 Eighty-seven percent of surveyed Harvard students intended to vote for Clinton, according to a Crimson survey last month. And while students at Harvard tend to be more liberal, even the Harvard Republican Club declined to support their party’s standard-bearer for the first time in its history, calling him a “threat to the survival of the republic.”

In that Crimson survey, only six percent of respondents supported Trump.

“I hope that the next steps are reconciliation," said Declan P. Garvey ’17, the president of the Harvard Republican Club. “The next steps are, on both sides, after this divisive election that both sides need to.... come together as a country. I am unfortunately not optimistic that that is going to happen.”

Remington Hill ’20 said the the atmosphere at the IOP was “strangely calm”—though as the night drew on, some students were in tears.

“Interestingly I think there is not a sense of mass hysteria that I’ve experienced through my phone," Hill said. "I’ve had people calling me that aren’t here at the IOP or here in Massachusetts that seem a lot more upset than everyone here.".

In the Quincy House dining hall, students, realizing that Clinton may not win, began to do homework.

“I’d say it’s pretty tense in here...Tense is probably the best word,” Andrew R. Puopolo ’19 said while watching the livestream of election results. “It’s also a little relaxed—a lot of people are doing homework. I think people are slowly starting to realize that the election is not going the way a lot of people want it to.”

At a watch party for the freshman class held in Annenberg, students said the atmosphere felt tense and anxious.

At 2 a.m. Wednesday, before the race was called, President of the Harvard Democrats Susan X. Wang ’17 said she and fellow students are “prepared to fight harder” following a Trump victory.