Despite the variety of stores in Harvard Square, the surrounding area is largely devoid of grocery stores and supermarkets.
By William S. Flanagan and Jamie D. Halper 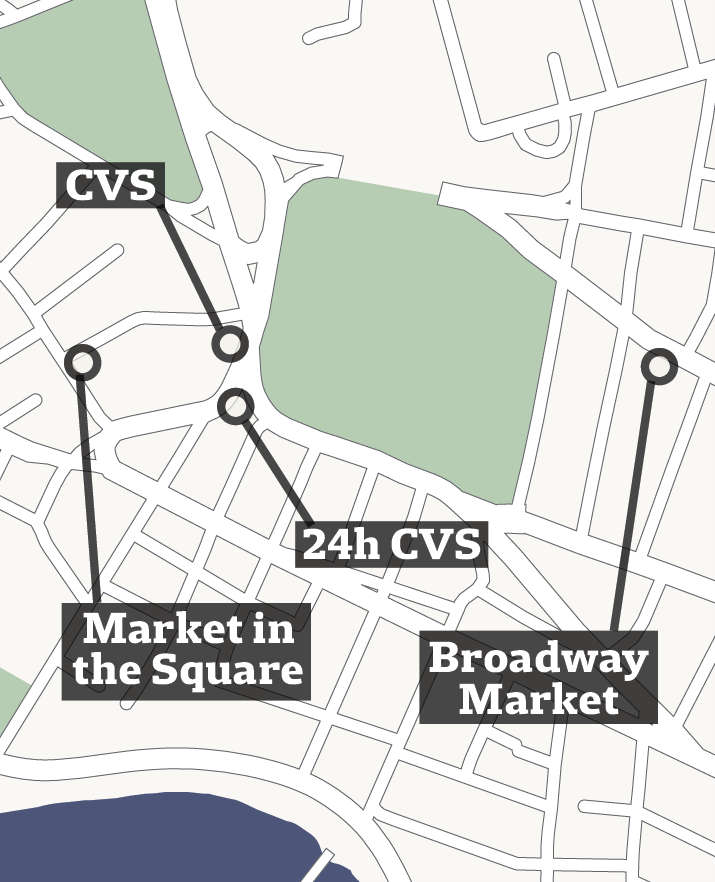 Graduate student Elaine F. Stranahan lives near Harvard’s Radcliffe Quadrangle, and used to walk just a few minutes to reach a small market store selling fresh produce, meat, and dairy. But ever since her local market, Evergood, closed, she has struggled to access groceries.

“It has really devastated my eating habits,” Stranahan said. “It was really, really remarkable to me that there were two CVS's across the street from Harvard buildings, but no grocery store within walking distance.”

Stranahan is not alone in facing difficulty finding places to buy groceries. Despite the variety of stores in Harvard Square, the surrounding area is largely devoid of grocery stores and supermarkets. The U.S. Department of Agriculture classifies Harvard Square as a half-mile “low-access zone,” given the distance local residents must travel to find groceries.

Finding healthy, fresh produce in Harvard Square is not easy. Graduate and undergraduate students, who live on and off-campus alike, point to comparatively long distances and expensive prices as barriers to accessing food locally.

Jade D. Warren ’17 lives off-campus in Harvard Square and said the lack of grocery stores presents an inconvenience to her, especially when compared to students on meal plans. She has to travel to other areas in order to purchase food.

“Everybody that lives in Harvard Square does this and I know that not everybody has cars. It’s one of those things that you just have to live with when you live in Harvard Square,” Warren said.

In the Harvard Square neighborhood, there are dozens of restaurants. But when it comes to locations that sell ingredients and staple foods, there are just two CVSs, the small Broadway Market, and the 24-hour Market in the Square.

Warren’s former apartment was near the Quad, giving her access to grocery stores in Porter Square. But now living in Harvard Square, she said there is little to no access.

Stranahan echoed Warren’s qualms about access, but also emphasized the issue of food cost in Cambridge. Prior to arriving at Harvard, Stranahan lived in San Francisco, a city known for its high cost of living. She was surprised to find costs higher in Cambridge.

“I had to dramatically increase the amount of money I allocated per month to food from what I was spending in San Francisco,” Stranahan said. “And I also had to lower my standards, because the quality of food was not as good, both in restaurants and in stores.”

Maya Garcia, a graduate student who lives in Sommerville's Union Square, previously lived near the Quad and said her new residence provides improved her access to food stores.

“I really liked this [apartment] and it certainly was a real motivating factor to go for it that it’s right by a Market Basket,” Garcia said, referring to a local supermarket. “Last year I lived halfway in between Harvard Square and Porter Square and so I really only had access to the Star Market, which is relatively expensive.”

Amy Y. Zhang ’18 also said the difficulty in being able to purchase affordable fresh fruits and vegetables not served in on-campus dining halls is a problem for her.

“There are nights where I’m studying or I’m walking through the Square and I kind of look around at all the different food options and realize that there’s not a lot of healthy things to eat, or you have to spend $6 for a small bowl of grapes at CVS,” Zhang said.

The Dudley Co-op, whose buildings are on Sacramento Street and Mass Ave., has a different situation. Maxine J. McGredy ’17, who is in charge of ordering food for the Co-op, said residents all contribute each month to fund groceries. She uses that budget to order food in bulk through delivery services such as Famous Produce and Instacart.

“We are not on the Harvard meal plan; we buy all our own food,” McGredy said. “We don't actually really go into supermarkets in Cambridge that much.”

The USDA looks at a number of factors to determine whether an area’s lack of food access qualifies it as a “food desert”—an area where reaching grocery stores is more difficult as a result of distance and residents’ economic capacity to purchase healthy food.

Apart from food deserts, where residents face the most extreme barriers to purchasing healthy food, the USDA also lists low-access regions. Generally, a low-access region is an urban area that is not within a mile of the closest grocery store, according to USDA economist Michele “Shelly” Ver Ploeg—who works in the department’s food assistance branch.

While local residents did note challenges in accessing food, the USDA classifications may not tell the full story. College towns deviate from the conventional urban model and often skew census statistics given their high number of temporary student residents with no income, according to Ver Ploeg. The campus itself takes up area that could otherwise be used for a grocery store, altering the regional distribution of access to fresh foods.

According to Josephine Wendel, the manager of the Cambridge Public Health Department’s Nutrition Programs, the picture presented by the USDA’s categories for Cambridge does not necessarily represent the actual food access situation. While the USDA emphasizes distance to food and number of low-income residents, she said the more significant issue in Cambridge is the high cost of living.

“Cambridge is an expensive place to live, so even for people who don’t have what’s typically called low-income, it may still be difficult to afford food,” Wendel said.

There are a number of city-sponsored programs that either make available free food for local residents or subsidize groceries.

Food for Free is a Cambridge-based nonprofit, partly supported by the City of Cambridge, that donates food to local shelters and residents in need. The director of the organization, Sasha Purpura, said the municipal government and area donors are very supportive of such programs. Furthermore, Purpura said Food for Free receives surplus food donations from grocers, such as Trader Joe’s, and various dining services at schools, including Harvard.

Fresh produce, which can be costly, is a category of food that the organization works particularly hard to provide.

The Margaret Fuller Neighborhood House, also a Cambridge city-supported non-profit located near Kendall Square, runs a food shelter that serves 16,000 people per year, according to its director, Christina Alexis. Alexis said that figure has increased dramatically in recent years.

Between 2015 and 2016, the shelter’s membership grew from around 550 individuals to more than 850. “It's a 55 percent increase in just one year of our volume of people who are utilizing this food pantry,” she said.

Alexis attributed the increase to Cambridge’s high cost of living, and said some stores do not sell products that qualify for federal programs such as Women, Infants, and Children benefits.

The city also funds, through donations and grants, a SNAP Match program. The program matches up to $15 worth of the federally-funded Supplemental Nutrition Assistance Program benefits when used at local farmers’ markets, in order to provide shoppers with $30 worth of groceries, Wendel said.

While most Harvard undergraduates are enrolled in the College’s meal plan, for graduate students and College students who are not, access to food continues to be an issue.

“[Graduate students] who live on their own, I would imagine, are in a similar position to me because they don't have a car,” Stranahan said. “It’s not like they can go on these huge trips to their favorite Trader Joe’s and bring stuff home.”

McGredy, who spent last summer living on Harvard’s campus but not in the Co-op, concurred with that sentiment.

“This summer I lived in Harvard and there’s nothing. It’s so hard to find food around here.”