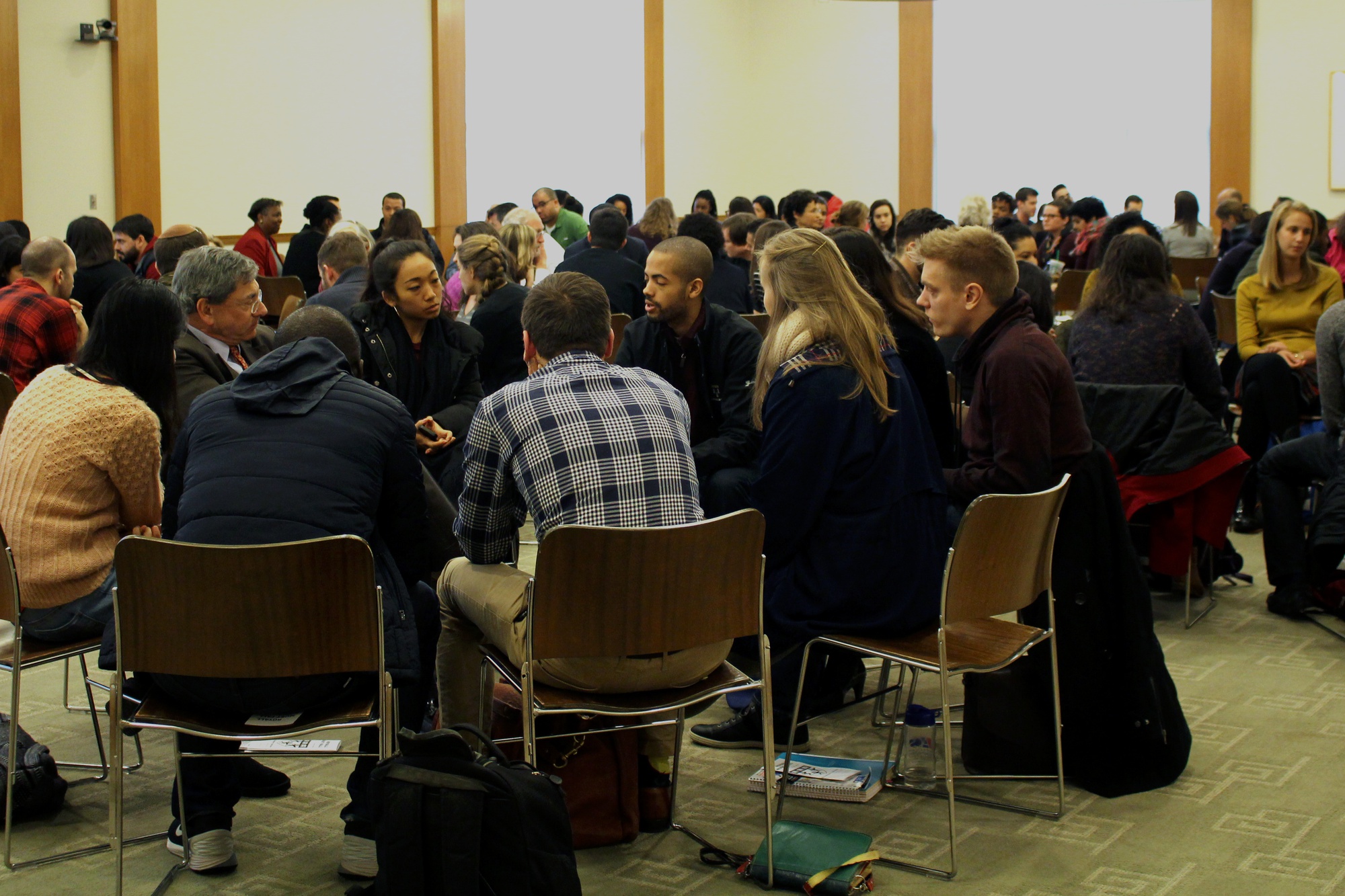 After a lull in activism over race relations at Harvard Law School, about 100 affiliates gathered at a “community meeting” Thursday afternoon to discuss the school’s controversial seal, which is currently under review. 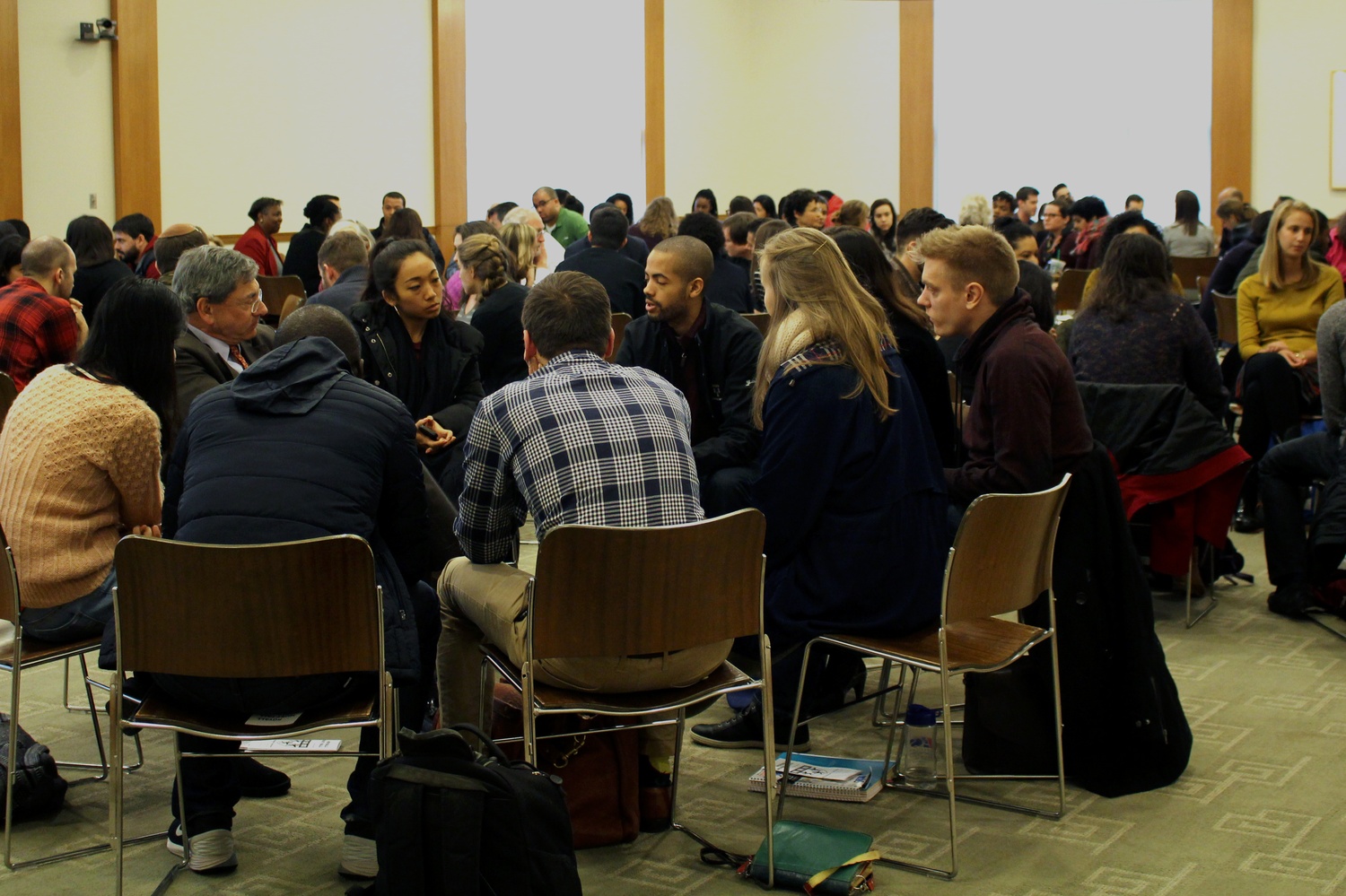 Harvard Law School students participate in a meeting about the change of the Law School’s shield on Thursday afternoon. A student organization called “Royall Must Fall” created last year protests the seal’s alleged association to slavery. By Hayoung Hwang

The committee to review the seal—which will release its recommendations to the Harvard Corporation in March—convened the meeting in the WCC center to solicit feedback on the seal.

Law School Dean Martha L. Minow created the student and faculty committee last November in response to demands for the seal’s removal by student activists from the group Royall Must Fall. The seal, which features the crest of the former slave-owning Royall family, was a focus of protests last semester about race and diversity at the Law School.

The review committee itself does not have the power to change the seal; rather, it aims to release a recommendation to the Harvard Corporation—the University’s highest governing body—which holds final decision-making authority. The committee has solicited feedback from Law School affiliates via email since November, and committee chair Bruce H. Mann said the group has received more than 150 messages so far.

The format of Thursday’s meeting diverged in practice from previous townhalls. Individuals broke into small groups along with committee members, who took notes on the discussion. Mann, who delivered the opening remarks and emphasized the importance of engaging a variety of viewpoints, said he hoped the format would help inform committee members about different opinions on the seal.

“Our hope is that this arrangement will enable people to listen to one another, and engage one another and members of the committee in a more conversational setting,” he said in his remarks.

Alexander J. Clayborne, a Law student affiliated with Royall Must Fall, said he was pleased at the turnout of faculty and staff at Thursday’s meeting. While he called the conversations that took place “robust,” he expressed disappointment at what he called a one-sided approach in favor of changing the seal. He said he had hoped Law School affiliates with opposing views would attend and debate the merits of the seal change with the activists.

“Student activists are accused of stifling free speech on campus, but whenever there is an opportunity to engage with people who disagree, the people who disagree don’t show up,” Clayborne said. “That’s a level of intellectual cowardice that needs to be called out.”

In the absence of dissenting voices, Clayborne said many conversations focused on the consequences of a potential committee recommendation to change the seal, though attendees did not create any definitive plans.

Since December, activists have been relatively quiet and members of several student groups—including Royall Must Fall, Reclaim Harvard Law, and the Black Law Students Association—declined to disclose their upcoming plans on the record. Meanwhile, the seal committee will meet later this month to deliberate, Mann said.