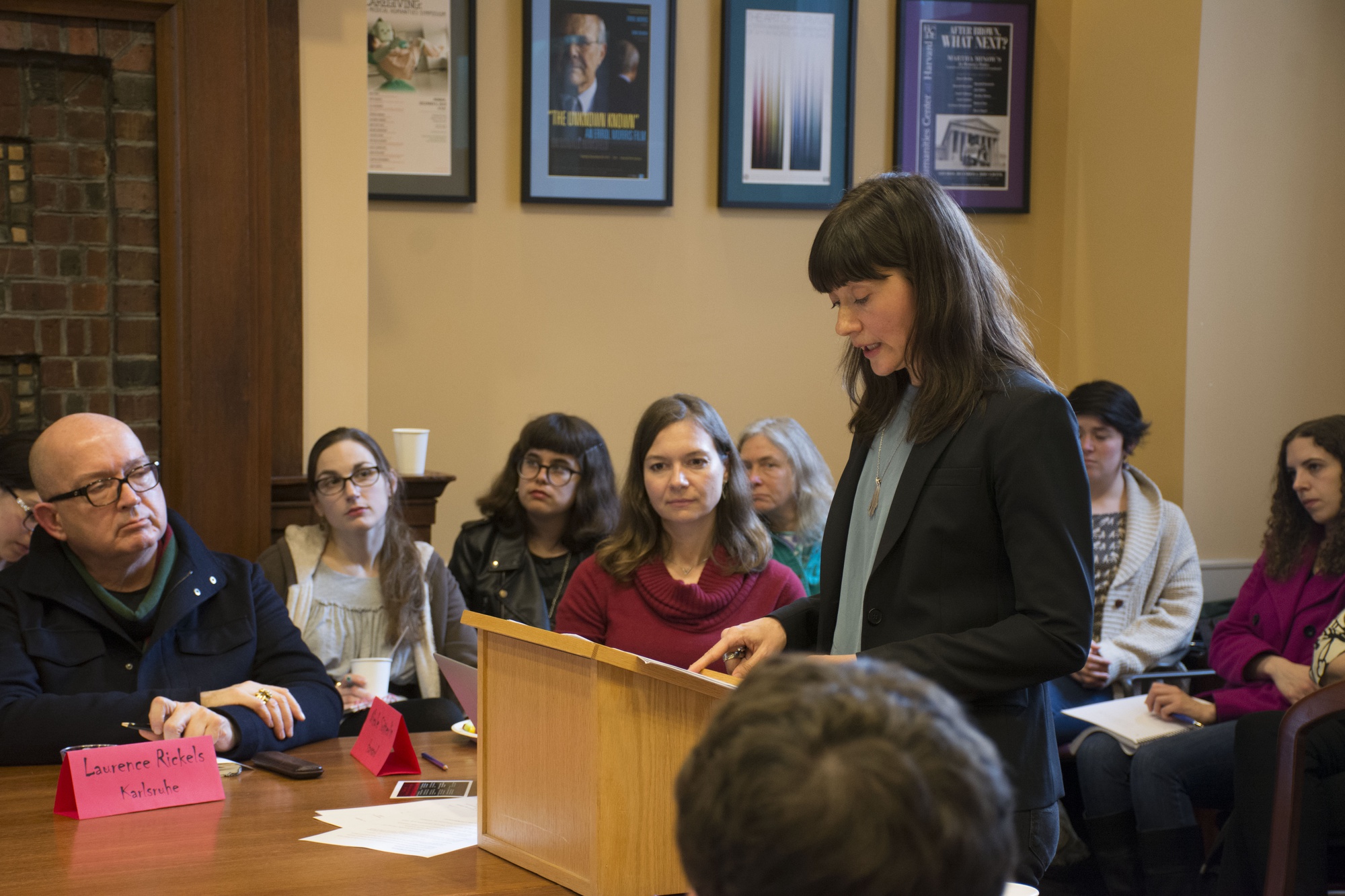 Bettina Stoetzer, assistant professor at MIT, lectures on German literature to the audience. Last Friday, an interdisciplinary conference called "Vampire Vibes: The Dark Side of Modern Culture" was held on problematics of identity, deviance, and power in modern history, literature, and media.
By Eugine Chung and Kenton K. Shimozaki, Contributing Writers

Students and scholars across several departments gathered around a “vampirian round table” on Friday to discuss the importance of supernatural elements in media and literature in understanding society’s age-old thirst for tales of the undead.

Panelists covered a bevy of metaphysical topics, such as the roles of bloodlust, sexual repression, and psycho violence in dissecting the human psyche. 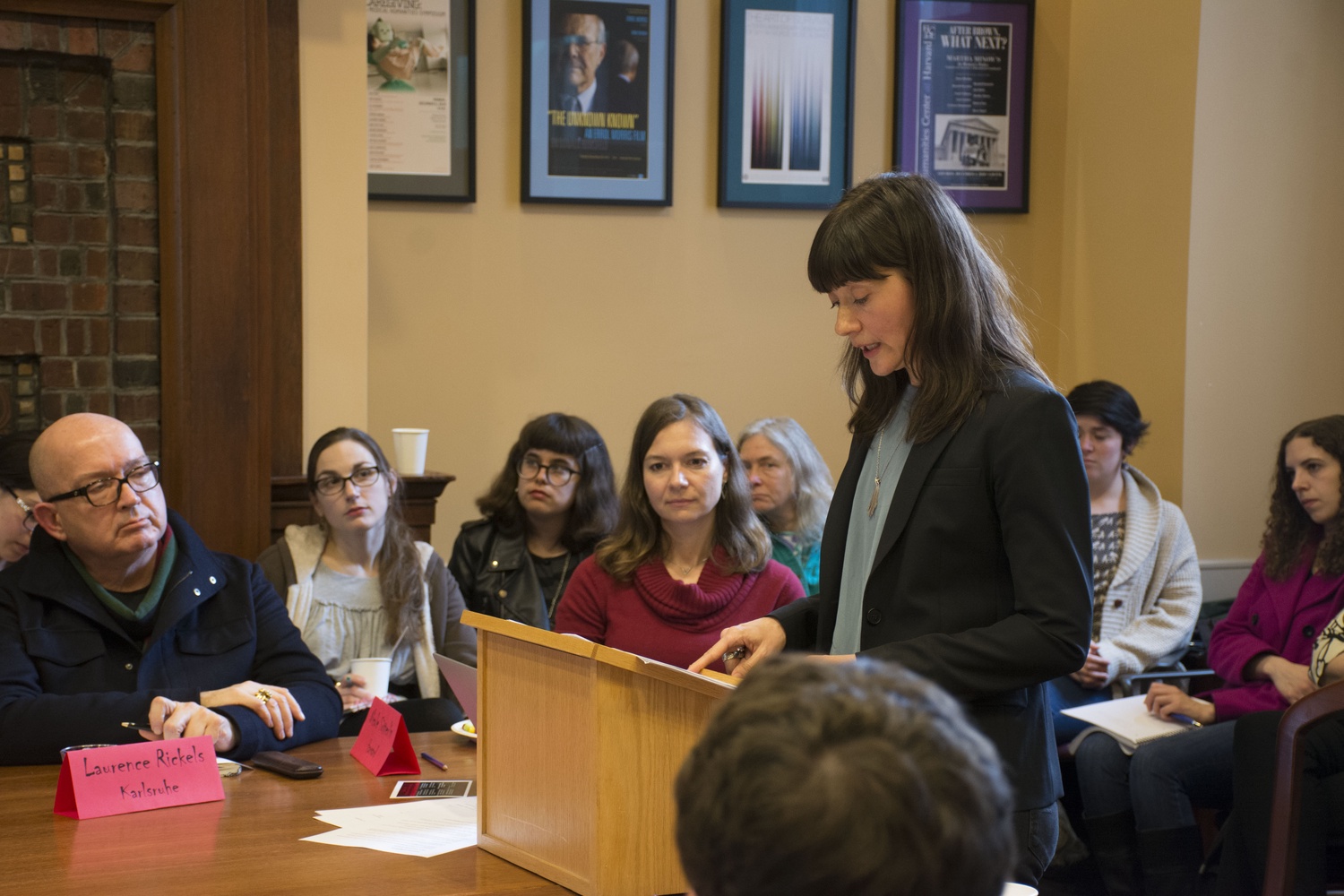 Bettina Stoetzer, assistant professor at MIT, lectures on German literature to the audience. Last Friday, an interdisciplinary conference called "Vampire Vibes: The Dark Side of Modern Culture" was held on problematics of identity, deviance, and power in modern history, literature, and media. By Jean Paul Valencia

Around 25 people attended “Vampire Vibes: The Dark Side of Modern Culture” in the Barker Center. The event was held in collaboration with the course German 170 “Biopolitics and the Vampire Aesthetics, 1716-2016,” according to course head and conference organizer Nicole A. Sütterlin.

The course aims to introduce students to the theory of “biopolitics,” or the idea that institutions like schools, hospitals, and prisons have an increasing amount of control over how we think and live. Sütterlin sees the course literature as being particularly relevant to contemporary issues like surveillance and medical records.

For Caroline T. Diep ’19, the class is a way to explore the intersection of various disciplines such as psychology, religion, media revolutions, and territorial and political boundaries, through the motif of vampires in literature.

“When I was looking for classes, I wanted to take a class I could sink my teeth into and that would expose me to a culture and topic outside my comfort zone,” Diep said.

Margaret M. Irving ’17, an anthropology concentrator, presented her research on the vampire series “Twilight” and the rise of social media. Irving hoped to uncover the sociological implications of the past popular obsession with the series.

“The panel was incredibly thought-provoking and enjoyable,” Irving said. “It was amazing to have the opportunity to interact with faculty from Harvard and beyond, and learn more about the many ways vampirism can be studied and analyzed.”

Keynote speaker Professor Laurence A. Rickels of the Karlsruhe Academy of Visual Arts spoke of the sometimes-hidden Freudian insights into society’s fascination with vampires in his panel “All You Vampires.”

When describing the appeal of portraying the vampire in mass-media, he posited that elements of the undead are unavoidable in everyday life.

According to Rickels, “the true vampire is in the news, in foreign affairs, at home, and sometimes even in us.”