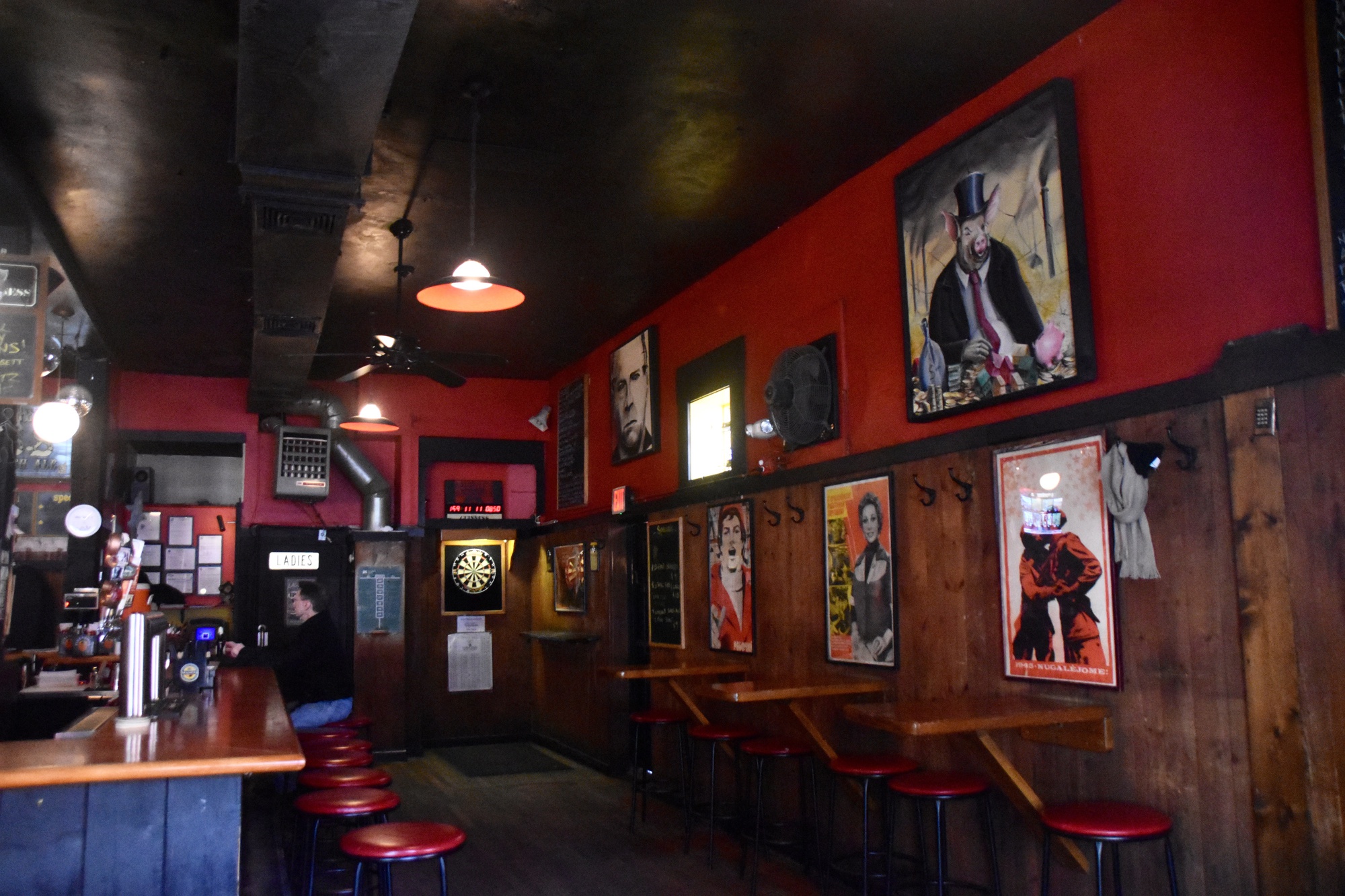 A patron sits at the bar amid various propagandic images lining the wall in People's Republik, a Russian Communist themed bar in Central Square.
Advertisement
Advertisement

A Drink to the Revolution: People's Republik

Nestled on the corner of Massachusetts Avenue and Lee St., People’s Republik, a Russian Communist-themed bar, has a startling exterior. Blood-red walls are streaked with lines of yellow and black, and they serve as canvases for huge murals.
By Lindsay Bu

I’m notorious for being horrible with directions. I never know how to get anywhere, and over the years I’ve come to rely on Google Maps as I rely on my own mother. But tonight, as I lead a group of friends to Central Square, I’m going to a place that’s almost impossible to miss.

Nestled on the corner of Massachusetts Avenue and Lee St., People’s Republik, a Russian Communist-themed bar, has a startling exterior. Blood-red walls are streaked with lines of yellow and black, and they serve as canvases for huge murals. One painting features a blonde woman in a scarlet cloak handing you a flyer that reads “Eat Here,” with a header above her that states, “Join the Party.” Another is a portrait of a non-distinct Communist man—hazel eyes, dark black hair, wearing a classic navy green hat with a bold, red star stamped at the center of it.

Fun, semi-ironic paintings seem to be a theme at People’s Republik. Inside the pub, hanging on the same red walls is a black-and-white portrait of Lenin, and an alcohol-themed edition of Da Vinci’s Last Supper, with the dinner table replaced by a bar. 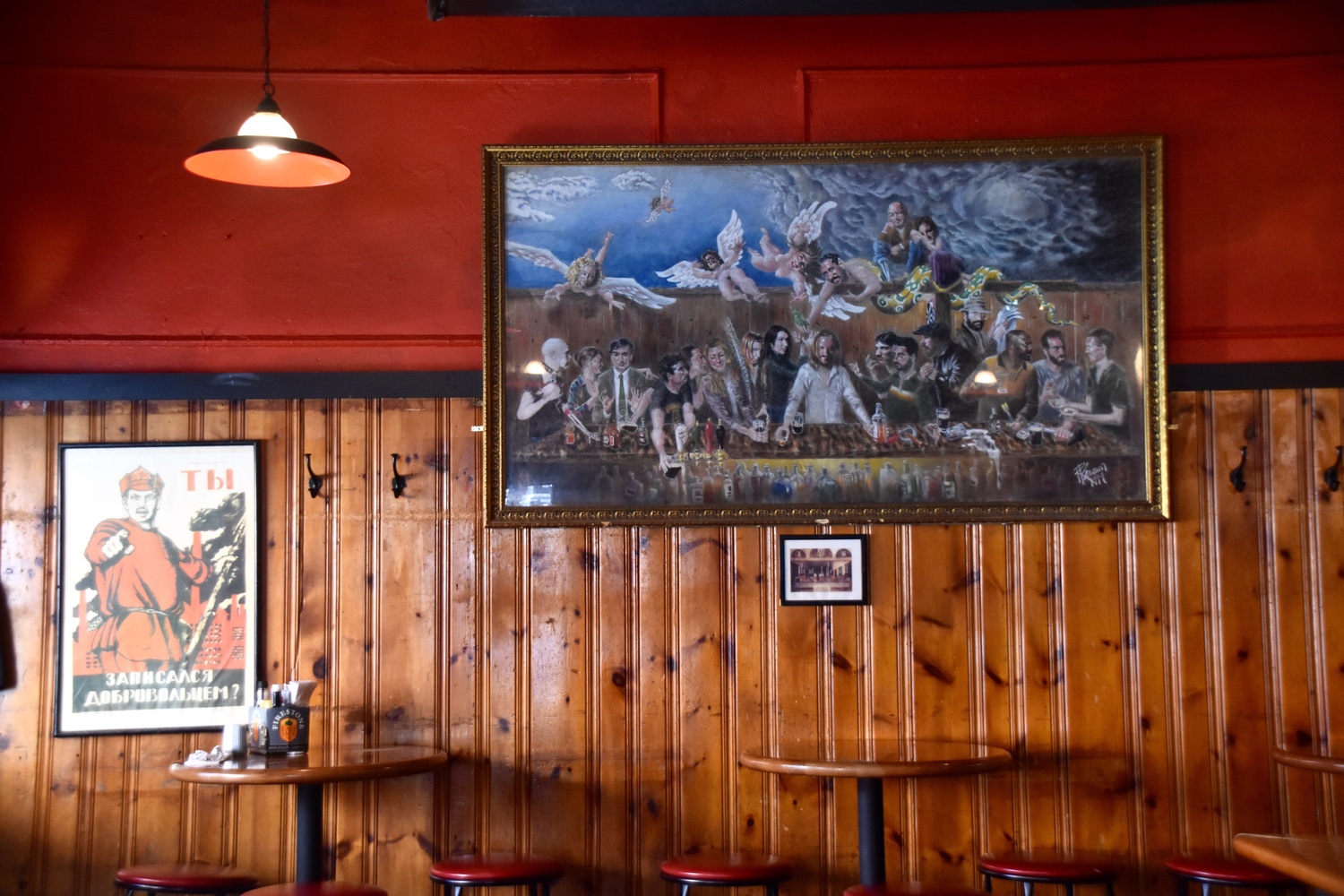 A painting in the style of “The Last Supper,” featuring historic patrons, hangs on a wall at the People’s Republik. By Melanie Y. Fu

The décor is definitely cheeky, but it’s not gimmicky. There’s a giant gray combat boot right above the bar area, which is a square placed right in the center of the pub. On opposite sides of the square are two games of darts, and scattered around the space are small circular tables with high bar stools. With the hum of soft rock in the air, smell of greasy fries, and buzz of patrons in their mid-twenties, People’s Republik has a homey vibe to it—one that doesn’t try too hard, but still manages to be good-humored and cool.

For a Communist-themed bar, though, the food and drinks are eccentric and surprisingly expensive. The food menu doesn’t have many items, but the items it does have are admirably diverse: They sell classic Philly cheesesteaks ($12) and mushroom banh mi sandwiches ($10), Salvadoran chicken flautas ($12) and Guinness beef stew ($13). Though their variety of drinks is solid, with many local pale ales and ciders, even their draft beer leaves you six or seven dollars lighter. They tout their Communist cocktails, from the “Green Bastard” to the “Bloody Trotsky”—I end up sticking with a craft cider and a plate of buffalo wings. The food is fine, but maybe at a price a little too steep for a place that bleeds red.

The crowd is also a little older than what I’m used to in the places around Harvard Square. It seemed to be comprised more of graduate students and young professionals than rowdy college kids. At a Communist-themed bar, you might expect to see Che Guevara t-shirts or at the very least Feel the Bern stickers, but the closest thing I find to a modern day Bolshevik is a man who I overhear lamenting about how his start-up is on the brink of collapse.

By the time my friends and I get ready to leave, our tummies are happily full and we’ve had our fair share of staring at Communists on the walls. We wave goodbye to Castro and his comrades and make our way back home.