Harvard Accepts Record-Low 5.2 Percent of Applicants for Class of 2020 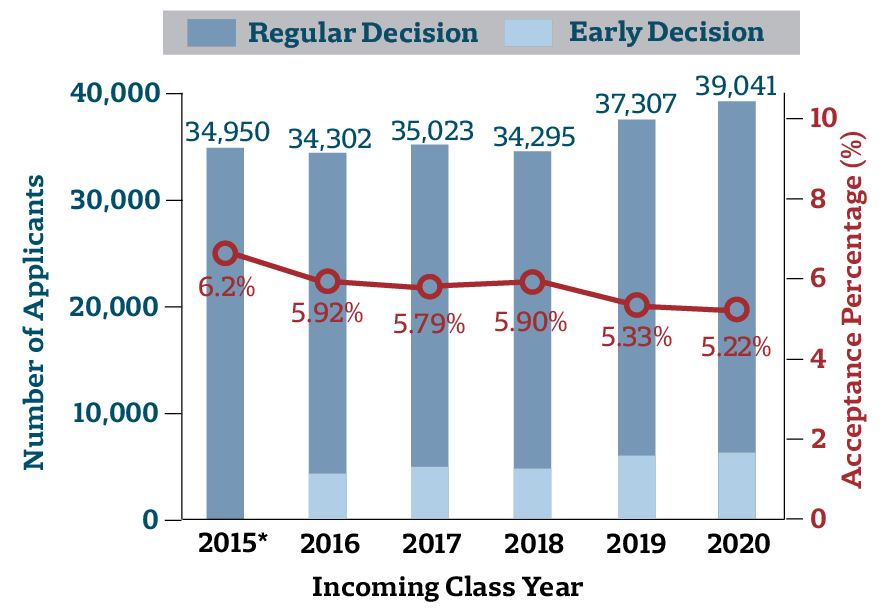 Harvard admitted a record-low 5.2 percent of applicants to the College’s Class of 2020, accepting 2,037 total students from a pool of more than 39,000 applicants and continuing a general decline in its admissions rate.

A total of 1,119 students received notifications of their regular decision acceptance Thursday evening through an online applicant portal. The full admitted class includes record-high percentages of African American and Asian American students and includes the 918 students who received offers of admission in December. Last year, Harvard admitted a then-historic 5.3 percent of students who applied.

Fourteen percent of the admitted class is African American, rising slightly from 12.1 percent last year, and 22.1 percent of the class is Asian American, up from 21 percent. These increased percentages come as Harvard faces intensifying scrutiny over its admissions practices. Currently, a lawsuit alleging the College discriminates against Asian American applicants remains on hold, and a group running for Harvard’s Board of Overseers requests Harvard be more transparent in how it considers race in its admissions practices.

Dean of Admissions and Financial Aid William R. Fitzsimmons ’67 attributed the slight increase in racial diversity in the admitted class to what he described as a “multiplier effect” thanks to Harvard’s efforts over the last decade to specifically recruit underrepresented groups of potential students through programs such as the Undergraduate Minority Recruitment Program and the Harvard Financial Aid Initiative.

“We’re certainly gratified to see everything going in the right direction, because we know there are lots of talented students from a variety of ethnic backgrounds who ought to be looking at this place,” he said in an interview Thursday. In a previous interview, Fitzsimmons acknowledged that “it’s hard to move the needle very far in one year” in terms of accepting minority students, despite aggressive recruiting from Harvard.

The economic diversity of this year’s admitted students has also increased, Fitzsimmons said, and a higher percentage of students than last year applied for financial aid and were eligible to have their application fee waived. About one-fifth of the Class of 2020 is expected to come from families with an annual income of $65,000 or less, thereby qualifying for Harvard’s new $2,000 “startup grant” to help freshmen with additional financial needs that may come up over the course of the year, Fitzsimmons said.

“We have worked very, very hard over many, many years to increase the economic diversity of the student body,” Fitzsimmons said, adding that admissions officers publicize Harvard’s financial aid program extensively while traveling the country to speak to potential applicants.

Other measures of diversity within the accepted class of 2020 remain largely unchanged from last year. Admitted women represent a slight minority of accepted students, comprising 48.4 percent of those admitted, up from 48 percent last year.

The percentage of Latinos in the admitted class of 2020 fell from 13.3 percent to 12.7 percent. The percentage of first-generation students remained roughly the same as last year at 15 percent, Fitzsimmons said.

Following an upward trend, 16.9 percent of admitted students indicated they intend to concentrate in the humanities while at Harvard, up from 14.8 percent last year. Fitzsimmons said recent publicity surrounding the new concentration in Theater, Dance, and Media and the reopening of the Harvard Art Museums may have contributed to the increased interest in humanities.

“So many exciting things have been going on here in the humanities, for a long time. Although the excellence has always been there, some of these very recent changes have caught people’s attention,” Fitzsimmons said.

Visitas, Harvard’s weekend of programming for admitted students, is scheduled to run from April 16 to 18, and more than 1,400 students are expected to attend. Students have until May 1 to accept offers of admission.

Fitzsimmons praised this year’s applicants for what he said was their exceptional talent.

“This year, despite the fact that it was a relatively small percentage rise in applications, it seemed to us like the quality of the pool, any way you want to look at it, was quite unusual,” he said. 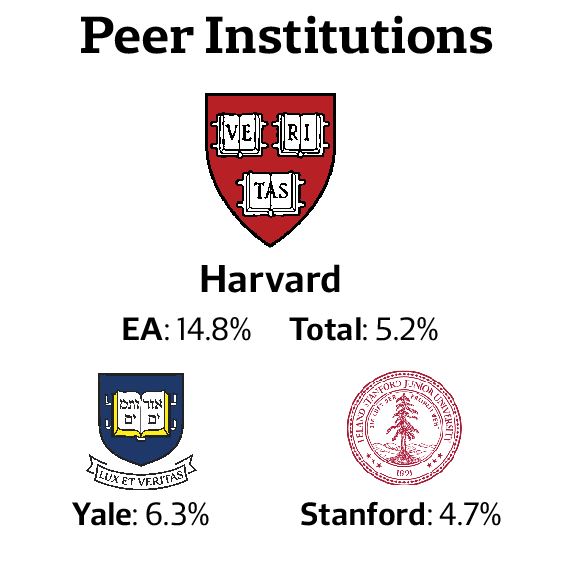 Harvard’s acceptance rate of 5.2 percent was higher than the rate at Stanford, which admitted only 4.7 percent of applicants. Harvard’s percentage was lower, however, than those of its peers in the Ivy League: Yale accepted 6.3 percent, Princeton 6.5 percent, Columbia 6 percent, Brown 9 percent, the University of Pennsylvania 9.4 percent, Dartmouth 10.5 percent, and Cornell 14 percent.

The Crimson was granted an interview with Fitzsimmons and early access to admissions statistics under the condition that they not be published until Friday morning.

A previous version of graphic associated with this article incorrectly stated that Stanford's admissions rate was 4.8 percent. In fact, it was 4.7 percent.