Backed by Boston Mayor Martin J. Walsh, the BRA is seeking a facelift after reforming its management structure, neighborhood planning, and community outreach.
By Jonah S. Lefkoe and Hannah Natanson 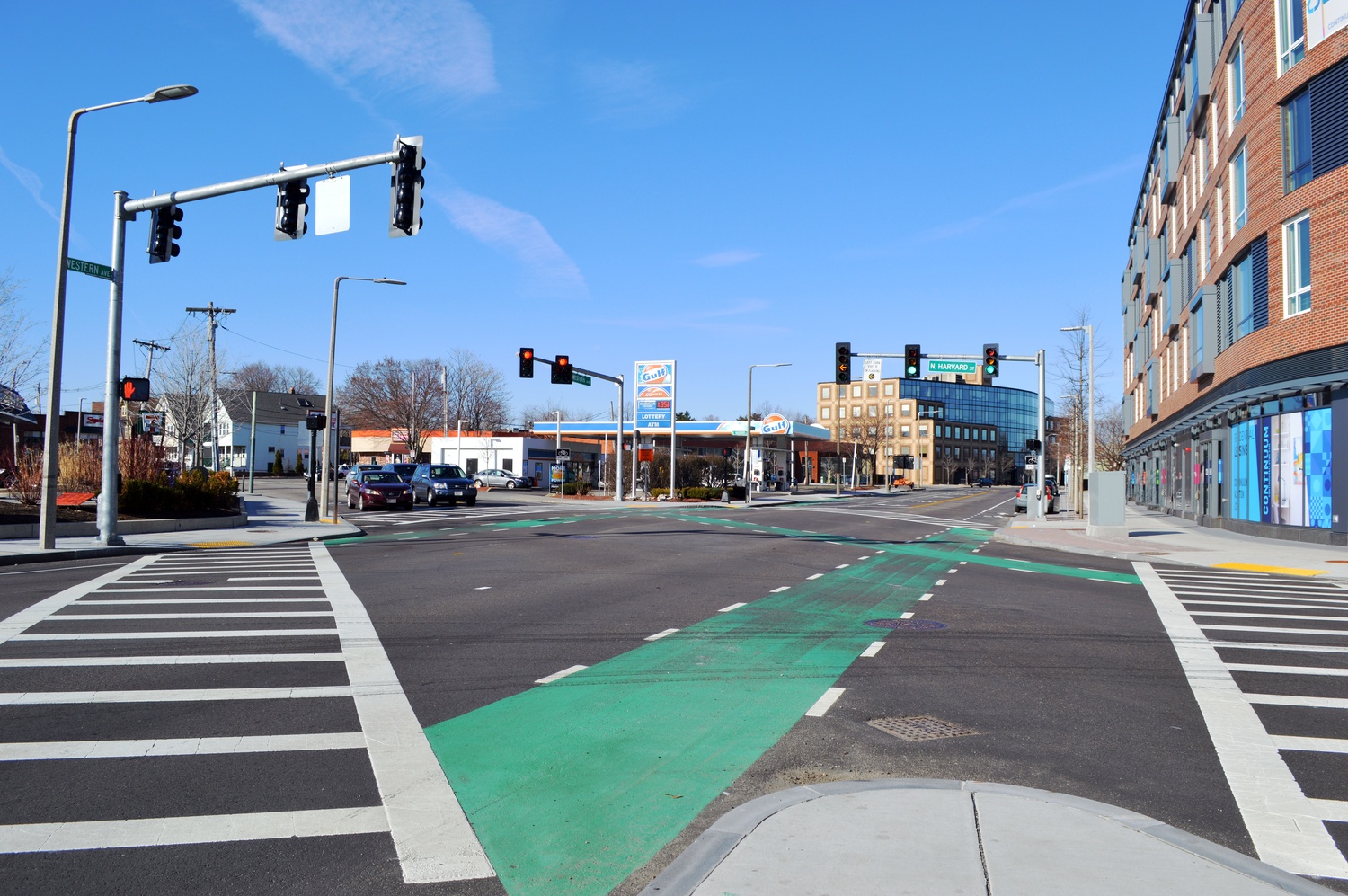 Barry's Corner is the center of Harvard development in Allston. The university has worked closely with the Boston Redevelopment Authority on the projects. By Megan M. Ross

In June 1997, Allston residents were shocked by more than the overbearing summer heat. Facing Allstonians at a community meeting, Harvard was accused of “deception” as it took steps to become the neighborhood’s “landlord,” fielding concerns over the University’s six-year clandestine purchase of 52.6 acres of Allston neighborhood land.

The Boston Redevelopment Authority, the city’s urban planning agency, was founded in 1957 to oversee the evolution of a changing city, its purview including eminent domain, and encouraging residential and commercial development. Today, the BRA classifies among its exhaustive list of responsibilities planning the future of Boston neighborhoods, expanding the tax base, encouraging sustainability, responding to population changes, and maintaining Boston’s unique character.

Harvard has sought BRA approval for each of its latest Allston projects, including a $1 billion new facility for the School of Engineering and Applied Sciences, the Continuum mixed residential and retail property, and the Life Lab, in a process that included neighborhood meetings for each new proposal.

In recent years, Harvard and the BRA have worked closely in the planning and execution stages of the University’s resolute march into Allston, often despite the protests of cramped residents. In 2007, The Crimson referred to the BRA as “the only entity with the ability to curtail Harvard’s activity.”

Backed by Boston Mayor Martin J. Walsh, the BRA is seeking a facelift after reforming its management structure, neighborhood planning, and community outreach.

Community members and city administrators are uncertain of how these changes will translate to a shift in BRA operation, its community relations, or the future of Harvard development.

Almost two decades have passed since Harvard’s clandestine Allston land purchases were revealed, and though the BRA, Harvard, and Allston residents have collaborated on several development projects since, the old wounds have yet to fully heal.

“People recognize that the BRA is its own entity and plays a role in the development across the board,” said Jim Montgomery, an Allstonian and member of the Harvard-Allston Task Force, an advisory board the BRA manages and composed primarily of Allston residents. “But I’m sure that some of the hard feelings and some of the bad feelings historically do go back to some of the early days of [the Allston] development.”

In 1997, Harvard officials were optimistic that once Allstonians felt the benefits of Harvard’s presence in their neighborhood, residents would warm to the University’s expansion across the river. After halting progress on Allston expansion through the 2000s—brought to a complete halt in the wake of the 2008 financial crisis—Harvard gained BRA approval for its Institutional Master Plan, a blueprint for Allston development, in 2013. The IMP includes a $43 million Allston community benefits package.

According to Kevin Casey, Harvard’s associate vice president for public affairs and communications, each new Allston development has been planned with proportionate community benefits in mind.

Included in the package is a $5.35 million flexible fund for unspecified public improvements in Allston. Projects such as the Harvard Life Lab and Innovation Lab have been planned with community benefits in mind, the specifics of which have sometimes provided a point of conflict between Task Force members and University officials. At a rodent control meeting in early 2016, Allstonians lauded Harvard’s community gift of hundreds of rat-proof trash cans to combat the rodent problem.

Despite the benefits package, BRA review process, and series of community meetings, some Allstonians said they felt as if they were left to chase the bulldozers as Harvard and the BRA negotiated the terms of new Harvard development.

John A. Bruno, the interim chair of the Harvard-Allston Task Force, said community concerns range from the logistical, criticizing long wait times for BRA projects, applications, and zoning appeals, and the cultural.

“I think there’s always been a question of transparency, meaning that, on occasion, there are local groups or associations that might approve of a project,” Bruno said, “And then ultimately the BRA makes the decision.”

Montgomery agreed that Allstonians have been concerned over what they conisder a lack of BRA transparency, with some calling BRA public processes a mere “rubber stamp” on deals negotiated primarily behind closed doors.

“I think that there are times where the community process seems to not prevail when maybe it should and then there’s no kind of real explanation other than the BRA has a different view,” Bruno said.

A New Coat of Paint

When Walsh took office in January 2014, he was “not shy” about requiring the BRA to take a “very self-critical look at itself,” according to Nick Martin, the authority’’s director of communications. Walsh hoped to revise the BRA’s policies, procedures, and personnel, in addition to the way the body engaged with neighborhood residents, Martin said.

Over the course of 2014 and 2015, Walsh initiated two separate outside reviews of the BRA—the first a pro bono study performed by KPMG, a professional auditory company, the second a $420,000 operational review conducted by global consulting firm McKinsey & Company. According to Martin, McKinsey identified three main issues: the BRA did not do enough neighborhood planning, did not manage its real estate assets well, and had a poor agency management structure.

Based off of McKinsey’s recommendations, upper-level BRA employees constructed a more than 40 point action plan, Martin said, which the agency has begun to implement. In one recent reform, the BRA’s financial department switched from paper to digital records, enabling the agency to better collect revenue.

“[This is] really, in our minds, a cultural shift,” Martin said. “The agency operated one way for a very long time and we’re trying to basically open it up and be more clear and transparent and up-front and open about the decisions that we’re making.”

Now, the BRA hopes to “leverage these reforms” to improve its public image, Martin added. In March, the agency issued a formal request for an advising firm to help with its rebranding efforts. Martin characterized the upcoming reforms as an “external makeover,” noting that even the BRA’s name may change.

Some area residents said they were pleased with the BRA’s attempts at self-improvement. Montgomery said he felt the BRA “is certainly getting better” and that the agency is now “more open to suggestions.”

Bruno, the interim chair of the Harvard-Allston Task Force, agreed.

“This is a giant step in the right direction,” he said. “Somehow maybe the voices of skepticism throughout the community [are] now resonating within the city and [the city is] saying, ‘Okay, Okay, we hear you, we’re going to do something about it.’”

Others, however, said they remain skeptical. According to Greg Galer, the executive director of the Boston Preservation Alliance, many in the Boston area are unconvinced that “this is a new BRA,” though the agency has managed to partially increase its transparency.

Galer added that he does not believe the BRA has “gone far enough” or “demonstrated enough change” to warrant its current focus on re-branding.

“It’s almost like... putting a coat of paint over a building when you haven’t quite finished fixing all the wood yet,” Galer said. “You’re still anxious to show that the house is new and sell it, but you really haven’t done all the repairs and that coat of paint may not stick.”

An improvement in the BRA’s public image may help to boost Harvard’s profile in the Allston area, some local residents said.

“In this neighborhood, certainly [Harvard and the BRA] are seen in the same lens, because it’s the same project,” Montgomery said. “The BRA is reviewing the same projects which are being sponsored by Harvard, for the most part.”

Bruno, however, firmly denied that the BRA’s image is tied to that of Harvard in Allston. The sole connection between the two as perceived by Allston residents, he said, is that some believe Harvard and the BRA continue to make deals behind closed doors, excluding the public.

“One could easily interpret that there’s private dialogue between the BRA and Harvard University,” he said. “What I’m always optimistic about is that we have a task force in place and we have community input... I think it’s important that we continue that kind of dialogue and that the BRA, in its effort to reform, gives us more of an active role in terms of what the community should look like and the reverse of that, that the BRA should let us know what they think the community should look like.”

Martin, the BRA representative, said the body’s priority, going forward, will be the communities it works with across the city and not institutions like Harvard.

“I wouldn’t focus so narrowly on Harvard,” he said. “I think that the reforms that we’re doing are meant to engender a greater degree of trust and confidence... with anybody that we work with and all communities that we’re in, and we hope that the reforms that have been put in place and the ones that are yet to come really just improve the working relationship that we have with community members.”

Harvard Spokesperson Brigid O’Rourke wrote in an emailed statement that the “University takes seriously the regulatory and community process associated with receiving project approvals in the City of Boston” but declined to comment on the BRA’s ongoing reforms.

Putting aside concerns over public appearance, the issue remains: have the BRA’s recent reforms engendered actual change in the way the body will deal with developers like Harvard going forward?

“That,” as Galer said, “is the million-dollar question.”