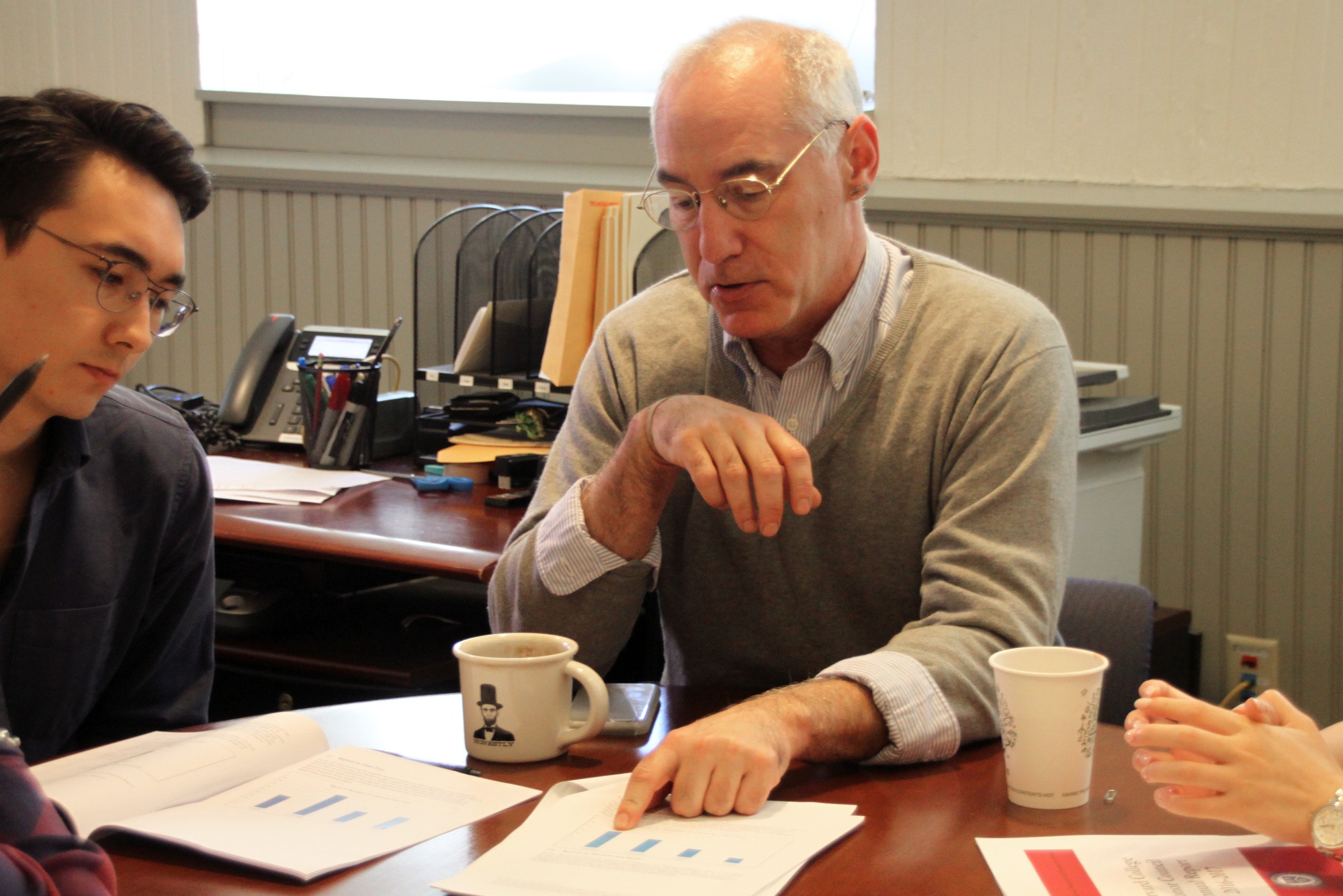 Brett Flehinger, the Secretary of the Honor Council and the Associate Dean for Academic Integrity and Student Conduct, discusses the Honor Council report released Monday with Jack W. Jue '18, a voting member of the Council.
By Hannah Natanson, Crimson Staff Writer

The College’s Honor Council is increasing its outreach to students this semester—adding meetings with athletic teams and making more presentations to undergraduate classes—as part of a broader push to grow the body’s influence on campus.

The Council, a two-year-old administrative body composed of students, faculty and administrators, adjudicates issues of academic dishonesty at Harvard. On Monday, the group released its second-ever annual report revealing the number of “inappropriate collaboration” cases at the College doubled over the past two academic years—an increase the report obliquely attributed to widespread cheating in a popular computer science course last fall.

The Council’s role on campus has recently come into question, particularly after Dean of the College Rakesh Khurana accepted a recommendation that the body help enforce Harvard’s social group policy, which penalizes members of single-gender social organizations. In an interview Friday, Council Secretary Flehinger and members Jack W. Jue ’18 and Margery W. Tong ’17 detailed a number of steps the body is now taking to raise its profile and publicize its purpose at the College.

During these discussions, Council members talked the athletes through different scenarios, according to Flehinger. He said all three teams were “incredibly responsive.”

The College rolled out the Honor Code and formed the Honor Council in wake of a massive cheating scandal in a government course that roiled campus in 2012. Many of the more than 120 students enrolled in Government 1310: “Introduction to Congress” who underwent investigation for cheating were varsity athletes.

Flehinger said Friday that the Council decided to meet with athletes specifically because varsity teams are groups that “you can reach.” He added teams are available for free-flowing discussion in an intimate setting.

“You can speak directly to them and they will be open and speak to you,” he said.

He said the Council contacted the football, men’s soccer, and field hockey teams in particular because those programs arrived on campus for preseason weeks before school started, making them easily accessible. Council members reached out to the women’s soccer team, too, but were unable to set up a meeting due to a scheduling conflict.

Flehinger said the body is looking to recruit more athletes to serve as members of the Council.

“We’ve always wanted to include athletes in the process, the reason we actually wanted to set Honor Council meetings on Mondays is because it’s the day [athletes] are least likely to have competitions,” he said.

In addition to speaking with athletic teams, Council members are slated to present to 39 undergraduate courses this semester, as well as to the roughly 60 freshman-only Expository Writing classes. Last year, the body presented only to Expository Writing courses.

Flehinger said the Council hired an intern over the summer, Stephanie J. Chan ’20, who reached out to dozens of faculty in the months leading up to the school year asking whether Council members could stop by one of their classes. For the most part, Flehinger said, professors were receptive to the idea.

Tong said she thought the class presentations that have taken place to date—some are scheduled for later in the semester—have worked out very well.

“It has sparked discussion in class about academic integrity,” she said. “I find often after presenting that the professors will chime in, discussing their collaboration policies, how they feel about the Honor Code—this shows that members of the Faculty are really engaged with the Honor Code.”

As a third prong of its increased outreach, the Council this year expanded the number of Student Academic Integrity Fellows, non-voting undergraduate members of the Council who help guide peers accused of academic dishonesty through the body’s adjudicatory process.

Over the past two years, roughly 60 percent of students who appeared before the Council chose to work either with these fellows or with personal advisers, according to the body’s report released Monday.

“We want to have a larger presence on campus and I think our goal for the Student Academic Integrity Fellow program is to have them not only be a support for the students but also to take on a larger ambassadorial role on campus,” Tong said. “What we hope is that they will sort of act as the face of the Honor Council.”

Jue added that the fellows plan to hand out chocolate bars in front of the Science Center to wish students “good luck” on midterms and finals this semester.

Flehinger said the Council will continue efforts to enlarge its campus profile in coming years.

“We’ll be increasing the role of Honor Council members as student leaders on campus,” he said. “These guys are incredible leaders and I think that’s one of the things you’ll see in the next five years.”

The Council plans to hold a town hall meeting Thursday evening, open to all College affiliates, to discuss the “specifics” of the report it released Monday.