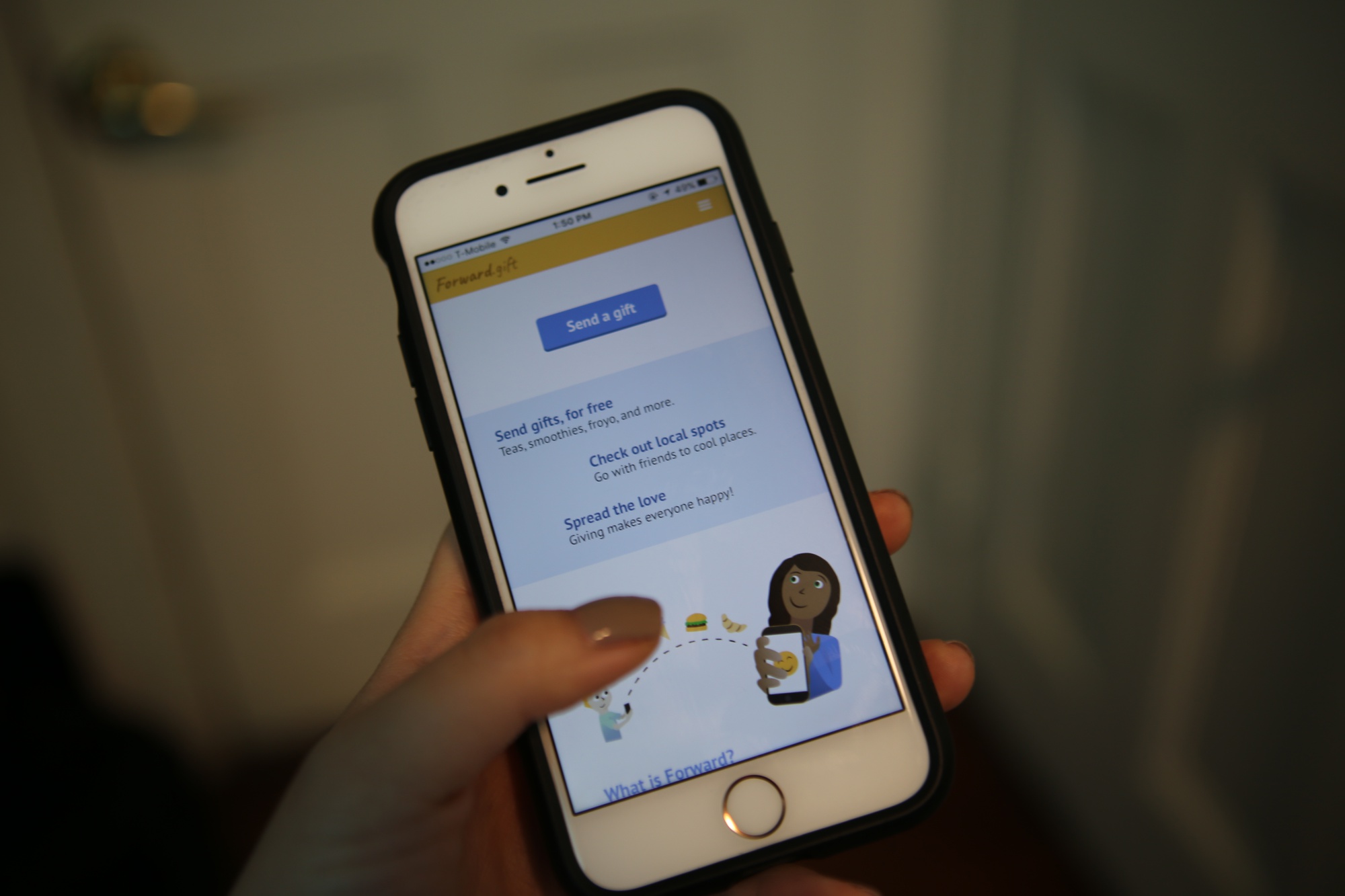 At www.forward.gift, in a total of three steps and five minutes, you can send a friend a coupon to a local business in the Boston area, free of charge.
Advertisement
Advertisement

There had to be some kind of catch. In FM’s weekly meeting, one writer mentioned she had received an e-mail from a startup promising free food in the Square. Sign up, it said, and she could send a voucher to friends for chips and salsa at El Jefe’s. What seemed like a surefire scam was actually Grant W. Burgess’s startup, Forward, founded in June 2016.

We decided to investigate Forward for ourselves. We went on the website and emailed each other gifts to Tealuxe, a local tea company in Harvard Square. Using the coupons on our phones, we successfully claimed our strawberry lemonade and Earl Grey iced teas without a hitch.

At the tea shop, we meet Burgess, who brightens the dimly-lit store with his vibrant yellow Forward T-shirt and an exuberant smile. As we sip our free drinks, he tells us more about his company.

“Forward is a gifting app,” he explains. “Essentially the way it works is you give your friend a coupon or treat from local businesses. You go with them to get that free item, and the business gets a potential new customer, just by giving away a cup of tea.”

After graduating from Williams College in 2008, Burgess went to work at Google in Kendall Square, where he did sales and account management for online advertisers. But he felt like something was missing. “I don’t think that working in a big company was for me,” he says. “I loved Google and its mission, but it wasn’t my personal mission.”

After leaving Google in Sept. 2012, Burgess traveled to New Zealand and worked on GenieWallet, a recently-launched rewards program for local businesses. Burgess’s favorite part of that program was that consumers could gift some of their rewards to their friends. “The problem is, guess how many people used this feature?” Burgess asks. “Zero. Which was so unfortunate, because that was the best thing about it.”

Forward was born. Inspired by GenieWallet, Burgess moved back to Boston to found his own start-up that would draw out people’s philanthropic instincts.

“We have this selfish part of our brains and this altruistic side,” Burgess says. “We live in such a consumer society where you’re always looking for that free thing, so my whole eureka moment for Forward was, what if there’s nothing in it for you?”

At the core of Forward is the idea of giving for the sake of giving. “It’s such an important part of what makes us happy, but we weren’t doing it enough,” Burgess says. He hopes that Forward will motivate people to connect and engage in acts of kindness.

And, although it may not be obvious at the outset, Forward can be just as rewarding for businesses as it is for consumers. Tealuxe has participated in the program since the summer, and General Manager Jennifer Fryar explains that Forward “hasn’t hurt our business in any way, and, if anything, it’s done great things for it.”

With Burgess’s partnership, Fryar set aside a limit of 30 teas to give away per month. Tealuxe lets Forward customers pick one of those free teas from their daily brewed selection, which is their most inexpensive line of goods. That way, Tealuxe isn’t losing any money—and, in fact, it’s gaining customers.

So far, it seems like it’s working. “Most of the people who come [to Tealuxe through Forward] have never been here before,” Fryar says. “It’s really unique to see them come in, pick a tea, kind of look around and soak it all in, and then you do see them start to come back. Not all of them, but some of them do—they become regulars.”

Burgess says he wants to continue advancing Forward over the next several decades. Forward is currently a web-based app, but he’s working on integrating the company with Facebook Messenger. It would allow customers to send gifts to their Facebook friends through the Messenger app. “We’re always thinking about experimenting with these different ideas to let people tap into the more altruistic side of them, and make Forward a more understandable system,” he says.

In the future, Burgess would like the company to grow and spread to more cities and small businesses. Currently, Forward has a network of 30 businesses in the Boston area and recently partnered with two small companies in San Francisco. The long-term goal, he jokes, is “gratitude world domination.” In five years, he wants 10 million people using “whatever Forward becomes.”

For now, Burgess is focused on spreading positivity in Boston. He strongly encourages Harvard students to take a break from their busy lives and try out some gift-giving. “If you want to be happy… don’t just think about getting this good degree from Harvard and making money,” he says. “Hopefully, Forward is the reminder that being nice to someone is what it’s all about.”