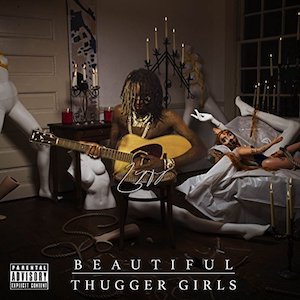 Cover of 'Beautiful Thugger Girls' by Young Thug. By Courtesy of Wikimedia Commons
By Dylan B. Meade, Crimson Staff Writer

Young Thug’s most recent album, “Beautiful Thugger Girls,” which dropped on June 16, is his most ambitious, accessible project to date. Wrangling in features from the likes of Snoop Dogg and Future, Thugger takes his mumble-rap style to a clearer, more refined level while also managing to step outside of his comfort zone. The vocal clarity on this project draws closer attention to the lyrics, however, an area where he continues to struggle to bring depth.

“Beautiful Thugger Girls” begins with the track “Family Don’t Matter,” which features delightful vocal additions from Millie Go Lightly. This track has a slight country vibe, but not one that is so overwhelming that it feels foreign to Young Thug’s style. He blends R&B, hip-hop, pop, and country together here in a way that really highlights both his strengths and weaknesses. While he does not provide an exceptionally strong vocal performance on this track, the emotion in his voice gives depth to the track that the lyrics do not. “Family Don’t Matter” is clearly not an outlier on this album. Rather, most songs on the project follow this same style: slightly country, heavily R&B, extremely melodic, overtly pop-centric. For the most part, it is fine.

The project includes several decent tracks, and they all feature other artists. “Family Don’t Matter” and “She Wanna Party” are lifted up by Millie Go Lightly’s vocal performances, “Get High” receives an iconic verse from Snoop Dogg, and Future delivers a nice chorus on “Relationship.” The features on these tracks really push them beyond what Young Thug is capable of alone. They carry him through the album, propping him up along the way. He doesn’t manage to produce a standout solo track, and that is telling of Young Thug’s inability to apply his patented style to this conglomeration of genres. The features assist him in reaching the height of what this album is—an attempt at pop and R&B that just doesn’t quite work.

Drake, Wheezy Beats, and London On Da Track are the album’s executive producers, and their influences are pronounced throughout the project. The production on this project is top-notch, and it is some of the best that Thugger has worked with in his career. The instrumentals are a far cry from the trap beats that he typically uses, and they are refreshing backdrops for his unique style. The majority of the latter half of the album, however, feels like an afterthought, and tracks like “Oh Yeah” and “Me Or Us” are frankly boring. It seems like Thug was stretching this experiment past its bounds with these tracks by gracing them with uninspiring, sloppy verses and subpar vocals.

The production value of the cuts on this album does overshadow much of this lifelessness, making them highly replayable. That being said, the features and production value were not enough to save Thugger from mediocrity on this project. His lyrics are still average at best and completely lacking substance at worst. The project shows life here and there, but it still falls overwhelmingly short. As in some of his other projects, like “1017 Thug” and “Slime Season 3,” he reverts to filler material right after showing us what the album could have been. The melodies here are some of his catchiest, and the album should do fairly well commercially. Ultimately, it is difficult to be truly disappointed by this album. It has all of the components that make it uniquely Thugger. From his nasally vocals to his mumbly flow, his style shines through on this album in full force, for better or worse. After numerous projects with more of the same, the hopes of a thoughtful, engaging version of Young Thug begin to diminish. This was not the country rap epic that most predicted, and it sure isn’t revolutionary, but this is an album where Young Thug is doing what Young Thug does best, just in a somewhat novel and refreshing way. If you are a fan of Young Thug’s earlier projects, this addition is worth the listen. Even if you have not been a fan but enjoy pop-themed rap-alongs, you may want to give this album a shot.

—Staff writer Dylan B. Meade can be reached at dylan.meade@thecrimson.com.