‘Hellblade: Senua’s Sacrifice’ is a Short but Singular Experience 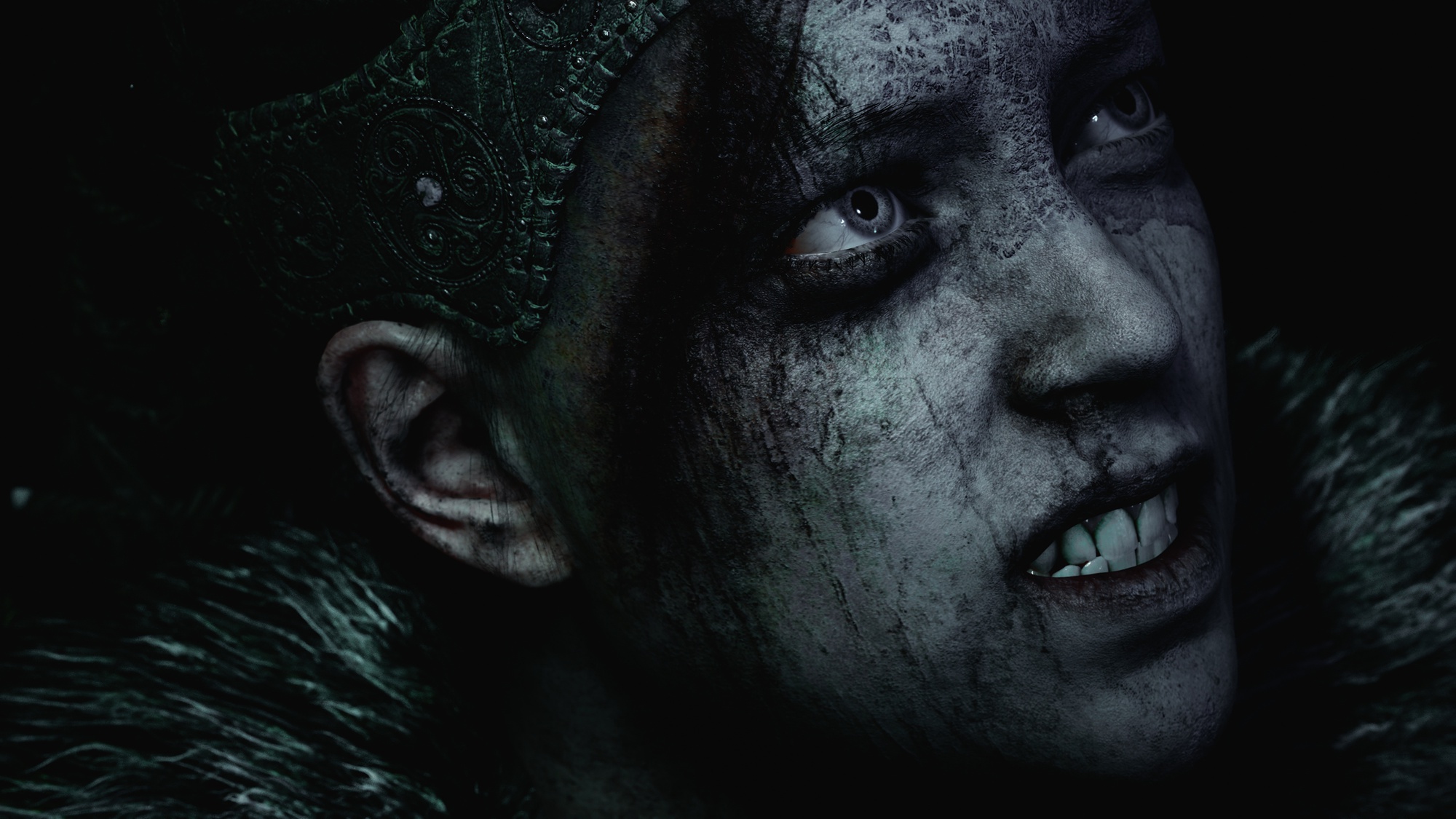 It’s difficult to put into words what exactly “Hellblade: Senua’s Sacrifice” did right, but it’s not hard to say that Ninja Theory (of “DmC: Devil May Cry” and “Heavenly Sword” fame) has outdone themselves with their latest game. From the very beginning, the player is pulled into the main character’s—Senua’s—world, and the game doesn’t let go of your attention until the end.

First, a bit of background. Last week, I conducted an interview with Dominic Matthews, Product Development Manager at Ninja Theory. In it, we briefly discussed the game’s most controversial design decision: Senua’s psychosis. He informed me that the voices she hears—which the player hears as well—were all recorded binaurally, meaning that users wearing headphones can place them in three-dimensional space. I didn’t expect this feature to be as striking as it proved to be, but it creates an experience which I can say without reservation is unlike anything I’ve ever come across before.

The voices become an integral part of the narrative and the game experience as a whole, so much that their absence in certain parts is jarring. Senua herself speaks very little throughout the game, but the voices are almost constantly commenting on what’s happening: whether it’s about the player’s current environment, support, abuse, or narrative commentary on Senua’s life and history, you almost never get a moment of silence.

Their role extends into the game’s mechanics as well. The voices take the role of a user interface, which “Hellblade” has eschewed in favor of promoting an unbroken cinematic experience for the player. I was skeptical when Matthews mentioned the lack of user interface in our interview, but I quickly realized that the Ninja Theory team knew what it was doing. Visual and auditory hints create an intuitive sense of what the player has to do in almost every situation, rendering a traditional user interface—things like a health bar, compass, map, etc—entirely unnecessary. It’s a subtle thing, but demonstrates incredible attention to detail and certainly a testament to the skill of the industry veterans at Ninja Theory

As Matthews said, it creates a more cinematic experience, and what a cinema “Hellblade” is. During the seamless cutscenes rendered in real time, the player’s camera often shifts until Senua directly addresses the player, speaking to the voices. In a way, you are just another one of the voices in her head, telling her what to do, observing her journey, a relationship the game isn’t shy about driving home. It creates a highly personal experience for the player, aided by some truly remarkable graphical detail and animation work. Hearing the voices in her head as if I were hearing them, then being addressed by Senua herself, brought me into the story in a way I’ve never experienced in a video game before. It was a sustained intimacy. If the player is addressed directly, it’s often not woven into the very fabric of the gameplay. But the master weavers at “Hellblade” did just that, and it works wonders.

That said, the lack of user interface did cause me grief occasionally. On encountering my first ladder, I wandered around for a bit before quickly consulting the options menu to discover that I needed to use the ‘F’ key to interact. There are no on-screen prompts in the way that games normally display first-time instructions, so while I appreciate the attempt to maintain the player’s immersion, it forced me to break entirely from the experience, albeit momentarily. This also occurred the first time I fought multiple enemies (a word on combat next) and nearly died because I couldn’t figure out how to switch focus on enemies. Again, this was not a problem for the rest of the game, but in these moments it was frustrating. A moment of on-screen guidance would have been welcome.

The second of the game’s three design ‘pillars’—exploration, puzzle-solving, and combat—is implemented in a really creative way. The puzzles take on the characteristics of the boss for whatever level they’re in. Every area involves finding the shape of Viking runes in the environment. With the aid of a few visual cues this process is usually more fun than frustrating, but it’s the regional differences that add a bit of flavor to each area. When you’re tracking down Hellblade’s god of illusion, Valravn, puzzles are about seeing through illusions to the truth beneath. When you turn your attention to Surt, a fire giant, puzzles involve making your way through a flaming maze. Each area fits snugly into place as the game builds its aesthetic, the puzzles presenting an interesting meta-commentary on what in the player’s experience is real, what is the game’s fiction, and what is Senua’s fiction within that reality.

The combat design in “Hellblade” is really quite good for a game of this size. Senua’s moveset is combo-based and fairly limited, but the complexity of the system comes in her combinations. There are about seven enemy types, all with their own attack patterns and consequent strategies to defeat them. Senua’s dodges can be incorporated into combos. Her blocks can stagger an opponent and open them up for attacks, and her kicks can stun enemies or break a block. Other moves include a sprint attack and genre-standard light and heavy attacks. The player also builds Focus while dodging or performing combos, which they can use to reveal enemies who are cloaked in shadows to expose them to normal attacks. Focusing slows time around Senua, allowing her to deal an incredible amount of damage or—as I more often used it—to escape from precarious positions. There aren’t a huge number of combos, and it seems the only way to learn them is to experiment with different combinations and timings of attacks. Despite the small moveset, combat is truly gripping and, for the most part, fair. Every enemy, from the basic warrior you first encounter to the hulking monsters which come later, can kill you if you’re not almost constantly dodging, blocking, and carefully maneuvering to avoid being surrounded. It's tense, brutal, and oh so satisfying.

If you do let yourself get surrounded, death comes quickly. This is not a game which is kind to players with a lack of foresight. Luckily, death isn’t permanent in “Hellblade.” At least, not at first. Upon player death, you respawn at the latest checkpoint. At the beginning of the game, however, Senua is cursed by the goddess Hela, queen of the underworld, with rot. Every time you die, the rot becomes worse. If it reaches your head, the seat of the soul in Celtic and Norse mythologies, you lose and have to start the game over. I didn’t die enough for this to be an issue, but the threat of a save-wiping death lurked as an ever-present fear. How many deaths is too many, especially when narrative events periodically advanced the spread of the rot? It made each combat arena, and each death, a nerve-wracking event, and gave the whole game a much more serious vibe than one with infinite lives.

Contributing to that vibe is the ever-present lurking of the darkness, which seems to be a manifestation of the evil against which she struggles. The darkness is mostly present in fleeting glimpses—shifting shadows flitting across what should be brightly lit stone, or concealing your enemies from you—but is later personified as a deep, inhuman voice. As you play through the game, it becomes clear that the darkness is not just a force of evil, at least not entirely. It is a physicalization of the darkness inside of her. All of her fears, all of her regrets, all of the abuse she’s suffered; it all comes together to become the darkness, and becomes a character in its own right.

Between the truly stunning implementation of the voices which plague Senua, the game’s stellar artistic design, and the primal Norse-styled music, the game accomplishes what it sets out to do with flying colors. The combat is satisfying, the narrative is gripping, and the art is stunning. Before you buy it, though, you should know: The game is short. I completed “Hellblade” the same day I got my review key. Steam’s game-time counter says it took me six hours. Since I wasn’t timing it myself, I’ll give them the benefit of the doubt and say it was almost seven (Steam counts by the hour, so it could have been six hours and fifty-nine minutes). For a thirty dollar game, it’s a bit on the short side, particularly for a game with essentially no replayability value. But the dollar-to-hour ratio is still better than a matinee screening at most theaters, and honestly, the quality of the experience makes up for its relatively short length. “Hellblade” is not a game for everyone. That’s not what it’s trying to be. It’s a great single-player experience that you might not want to play again after you beat it, but it’s a hell of a time while you’re on that first run. If you’ve got the cash and you’re looking for a unique narrative experience, I can wholeheartedly recommend that you seriously consider picking up Ninja Theory’s “Hellblade: Senua’s Sacrifice.”