In Presidential Search, Calls for Diversity

Over the course of four centuries, Harvard has seen presidents of many stripes. But to date, all have been white. And, until current University President Drew G. Faust, male.
By Claire E. Parker 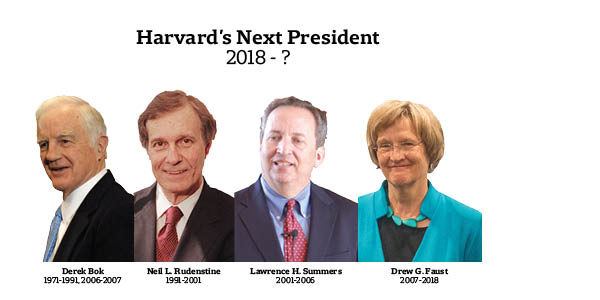 Over the course of four centuries, Harvard has seen presidents of many stripes. They’ve been clergymen and classicists, ambassadors and governors, chemists and botanists, and secretaries of State and the Treasury.

Their training and trades may have varied—but to date, all have been white. And, until current University President Drew G. Faust, male.

With the search for Harvard’s 29th president in “information gathering” mode, several alumni groups are hoping the next face of Harvard will look a bit different. The Harvard Latino Alumni Alliance, the Harvard Business School Latino Alumni Association, the Coalition for a Diverse Harvard, and the Harvard Asian American Alumni Alliance each submitted letters to the search committee, urging members to prioritize candidates who come from traditionally underrepresented backgrounds and demonstrate a commitment to building upon Faust’s diversity initiatives.

Presidential searches are moments of institutional soul-searching, as Harvard’s stewards select a leader who will chart the school’s course for years to come. And the alumni affinity groups—which collectively represent thousands of Harvard graduates across the world—want support for the University’s traditionally underrepresented populations to be front and center in this new era.

Harvard’s next president, regardless of their identity, will face no shortage of challenges as the University’s efforts to become a more inclusive and diverse campus have come into the center of national and campus discourse.

In July, the Department of Justice launched an investigation into Harvard’s affirmative action policies. Earlier this month, President Donald Trump said he will end a program for undocumented youth that benefited several dozen Harvard students. And this summer a committee of faculty recommended that Harvard ban membership in social groups, citing their exclusive and discriminatory nature.

“We very much hope that the search committee maintains the ideals of diversity and inclusion and belonging front of mind as they search for candidates for the job,” said Jeannie Park ’83, First Vice President of the Harvard Asian American Alumni Alliance and co-founder of the Coalition for a Diverse Harvard. “It would be really a tragedy if Harvard were to take steps backward in those areas.”

When Faust was selected as the University’s 28th—and first woman—president in 2007, students and faculty heralded the historic appointment. 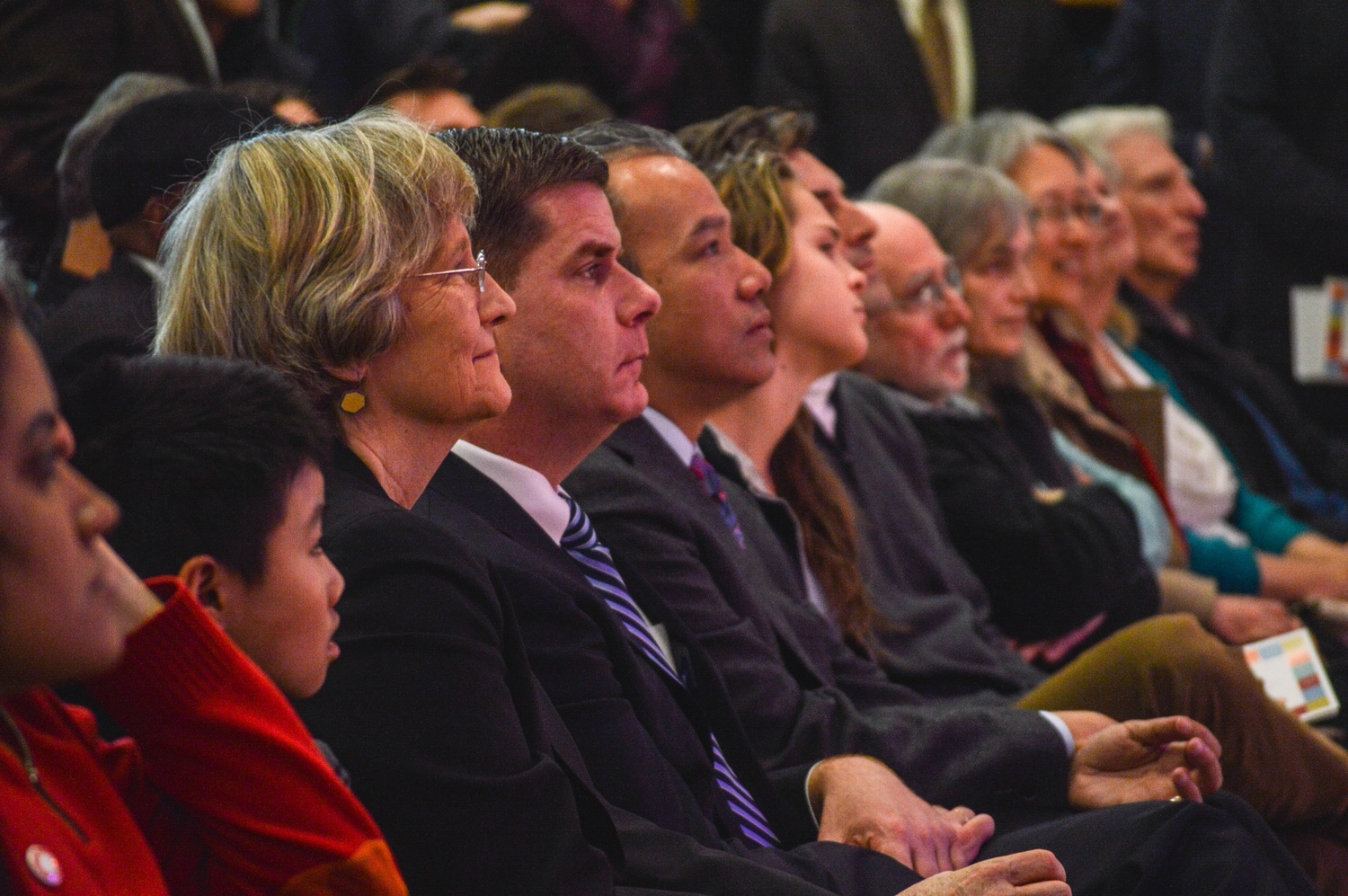 University President Drew G. Faust seated next to Boston Mayor Martin J. Walsh at the opening of the Harvard Ed Portal at its new location in Allston in 2015. By Y. Kit Wu

Ten years later, some would like to see Harvard make history yet again.

When Corporation senior fellow and search committee chair William F. Lee ’72 sent a mass email to Harvard affiliates over the summer soliciting input on the search, alumni began to make their case.

The HBS Latino Alumni Association, Harvard Latino Alumni Alliance, and Coalition for a Diverse Harvard letters all implore the committee to cull candidates from a variety of underrepresented groups.

Doing so would have a symbolic impact that would generate ripple effects throughout the world of higher education, according to the Coalition for a Diverse Harvard, an umbrella organization with over 1,000 alumni supporters.

“Given that Harvard’s selection of its President will have an immense impact and influence in international academia for years to come, we hope you will exhaustively seek to identify, recruit, and consider candidates from diverse backgrounds,” their letter to the search committee reads.

The HBS Latino Alumni Association submitted biographies of eight prominent Latinos they think the search committee should consider for the job—including California Supreme Court Justice Mariano-Florentino Cuéllar ’93, President and Chief Executive Officer of the National Council of La Raza Janet Murguía, and Louis E. Caldera, an alumnus of the Law School and Business School who is the former president of the University of New Mexico and a former adviser to Presidents Obama and Clinton.

“I do think that this is an important time to recognize that there are Latinos that fit the criteria,” Cardona said. “We’ve outlined how they might meet that criteria—we just hope that they’re considered.”

But the composition of the body charged with vetting presidential hopefuls has raised eyebrows among Latino alumni.

With four non-white members and six women, the 15-member search committee—consisting of 12 Corporation members and three Overseers—is slightly more diverse than it was in searches past. But Latinos are still absent from the group.

“We would like to express our deep disappointment that the Selection Committee does not include Latino representation,” the HBS Latino Alumni Association letter to the search committee reads.

Since August, the search committee has appointed faculty, staff, and student advisory bodies containing several Latino members. But the HBS Latino Alumni Association letter calls for the creation of a separate Latino advisory group to “facilitate a dialogue with the Latino community, summarize key considerations for the Search Committee, and help bring an increased level of awareness to the University’s diversity initiatives.”

Several Latino groups have endorsed the letter, and Cardona said she and representatives from the Harvard Latino Alumni Alliance have corresponded with Lee about scheduling a meeting with search committee members to discuss their proposals in October.

A University-wide Task Force on Inclusion and Belonging is slated to release its recommendations by the end of the fall, and Faust’s successor will be charged with implementing them.

Between a renewed examination of Harvard’s connections to slavery, a push for an ethnic studies academic program, and calls for a more diverse Faculty, many alumni and students hope Harvard’s next president will continue and build on Faust’s efforts.

“We’d love to see a Latino president of Harvard University, no doubt about it,” Harvard Latino Alumni Alliance president Debra Sanchez Reed said. “But what we’re asking for is that as the search is done, the qualities include what we’re looking for— and that’s openness to diversity, a willingness to support the minority populations at Harvard, and a willingness to be open to some of the ideas that have been put forward over the years that have not come to fruition.”

Alumni largely praise Faust’s efforts to promote diversity and inclusion at the University. During her decade-long tenure, Faust has expanded financial aid, advocated for undocumented students, and presided over processes to grapple with—and publicly acknowledge—Harvard’s historic ties to slavery. She has defended the University’s race-conscious admissions practices and appointed the University-wide Task Force on Inclusion and Belonging, which is slated to complete its work before Faust departs. 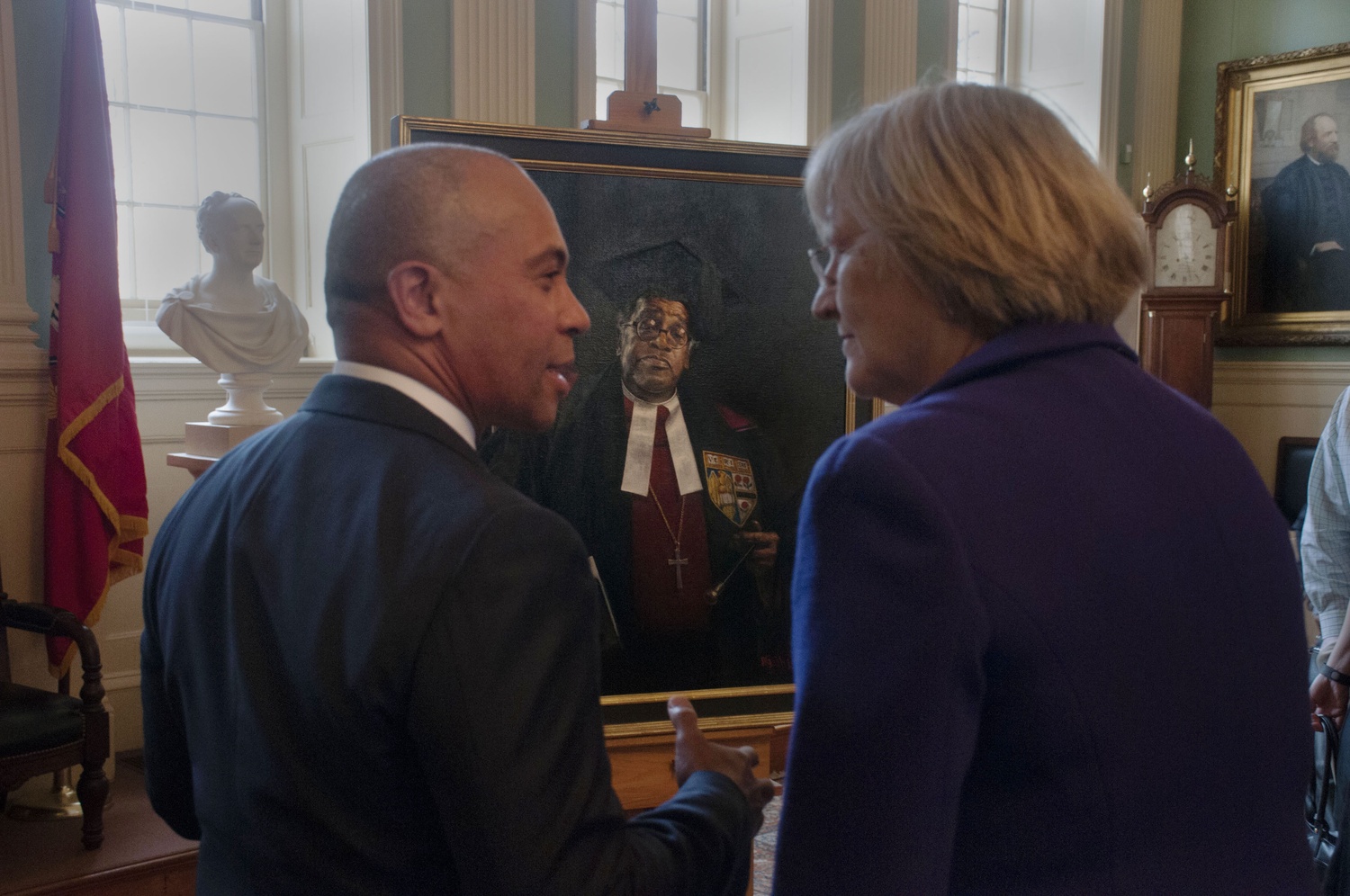 Lee’s comments in an interview with the University-owned Harvard Gazette indicate that the search committee will prize a similar focus. Lee lauded Faust’s “ability to listen to a wide range of voices and perspectives from a diverse set of constituencies,” adding, “We hope the new president will have those qualities because they are critical to effective leadership.”

But even as they heralded Faust’s progress, the alumni groups urged the search committee to choose a successor who will go even further than Faust in elevating minority communities on campus.

Sanchez Reed said that while Harvard’s Latino population has grown in recent years, Latino students need additional support. Specifically, the Harvard Latino Alumni Alliance letter calls for a Latino cultural center on campus and a Latino studies program—both entreaties that Latino groups on campus have made to University administrators for years, to no avail.

William Yao '90, the president of the Harvard Asian American Alumni Alliance, wrote to the search committee that the group hopes the next president will pay more attention to Asian Americans.

“Asian Americans are the fastest growing ethnic or racial group in the U.S.—a fact that is certain to continue to shape the demographics of Harvard—and yet we are frequently left out of conversations and decisions around race at the University,” he wrote.

And several groups pointedly requested that the search committee choose a successor who will support establishing an ethnic studies program. Groups of Harvard affiliates have lobbied the University for over four decades to create such a program.

“In a time when concerned citizens grapple daily with issues of race, ethnicity and immigration, the absence of serious and focused Harvard scholarship in areas of race beyond African American Studies is a glaring gap,” Yao wrote.

Affirmative action is another charged issue next president will have to navigate—particularly as a lawsuit and Justice Department probe scrutinize Harvard’s race-conscious admissions practices. Faust has repeatedly and forcefully defended Harvard’s approach to affirmative action as the federal government, some alumni, and several advocacy groups have argued that it may discriminate against Asian-American applicants.

“We feel very strongly that the incoming president needs to understand why these measures have been put into place, and how they have enabled our university to come to the place we are now,” said Cardona, who worked for the Undergraduate Minority Recruitment Program while a student at the College.

But Asian-American alumni are troubled by the accusations of bias against Asian Americans that the lawsuit has raised.

“Regardless of the outcome of the lawsuit, we expect that the new president will do whatever necessary to ensure that the admissions process is free of any and all bias against applicants of Asian heritage and will be able to refute conclusively any assertions to the contrary,” Yao’s letter reads.

The affirmative action debate points to the challenge Harvard’s leaders face in balancing the interests of the University’s many constituencies.

It is a challenge Lee himself identified in the Gazette interview as one the next president will need to be prepared to take on.

“There is the question of how universities can best serve a diverse population of faculty, students, and staff,” he said. “