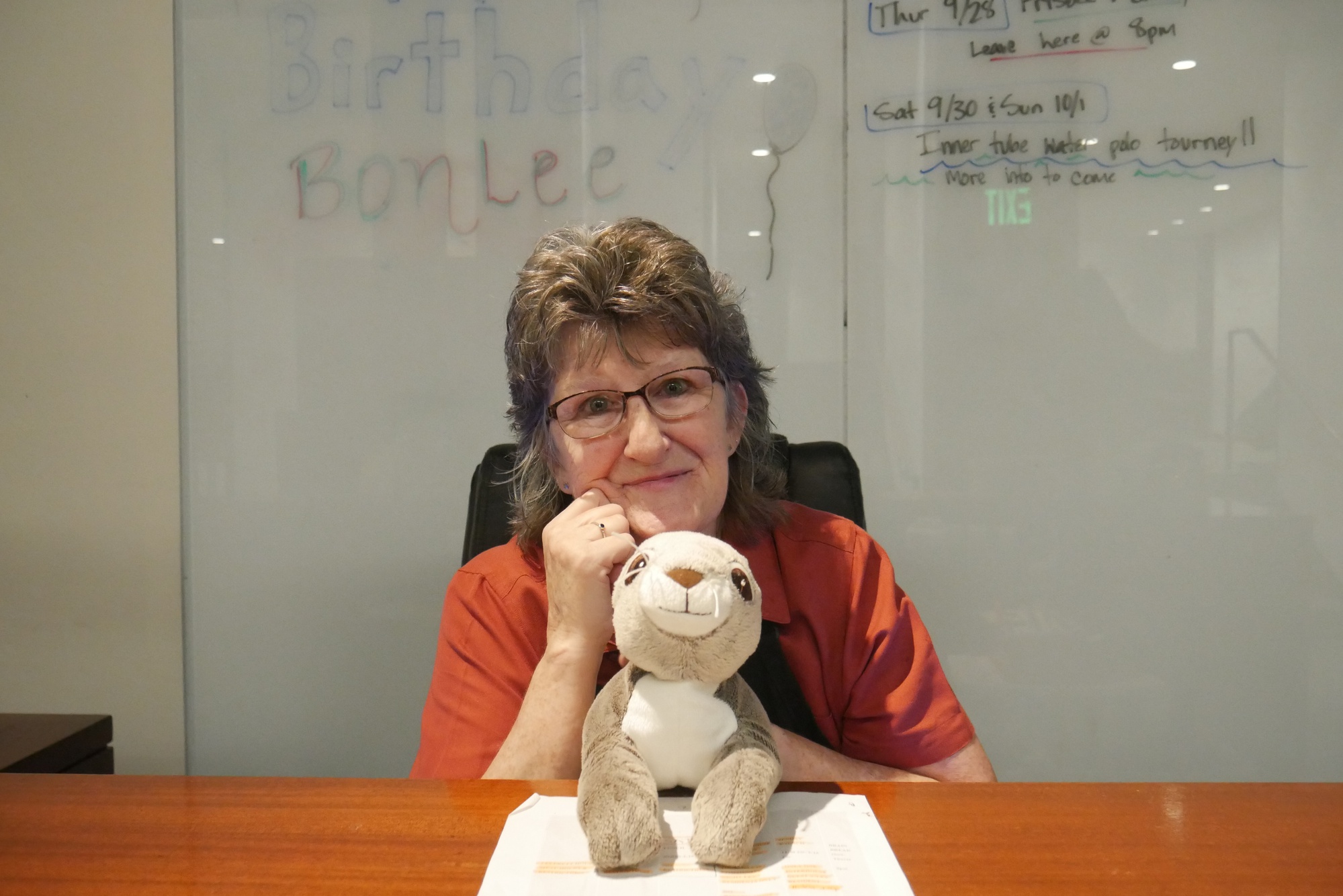 Not On Bonnie's Watch

Trying to get into Lev on a Thursday evening during Community Dinner? If you’re not in Lev, then not on Bonnie’s watch.
By Gabriela J. Siegal

Brrrrring!!! The sound of the ID swipe machine outside the dhall chimes as Leverett House Checker Bonnie Lee Kimball welcomes Leverett House residents in for dinner. Trying to get into Lev on a Thursday evening during Community Dinner? If you’re not in Lev, then not on Bonnie’s watch. Everyone knows Bonnie, but few know anything beyond her friendly smile and distinctive blue hair. FM pulled up a seat at Bonnie’s checker desk to learn more about her.

FM: Your name is Bonnie, but why does your name tag say BonLee?

BK: My nametag says BonLee because I interacted with a student last year who had the same middle name as me, which is Lee. I told him that I never liked my name because people mispronounced it. So, the student said, “Why don’t we just take your first name and middle name and put them together and call you BonLee!” I loved it! I absolutely loved it!”

FM: Where are you from?

BK: I am from Somerville, Mass. We moved to Charlestown, the next town over, then we moved to Dorchester when I was 16. You see right there [on my hand] that’s the dot right there, the Dorchester Dot, the “Dot Dot.” The dot shows that I was a toughy in my neighborhood.

FM: What did you do before Harvard?

BK: This is actually not my type of work, but I have stayed here for 17 years. I was previously in administration for a couple of companies like the Boston Red Sox. Then my job folded and I needed to work because I had three kids. My son was dating a girl at the time that works here at Leverett House and she told me that there was a position open. I got hired in the dish room and worked my way up to here to be the Leverett House Checker. I love what I do, it makes me happy.

FM: Have you always been in Leverett House?

BK: Yes, I’ve never been anywhere else. Even if the pay was better, I would still stay in Leverett. They tried that once. They told me that they needed me to work someplace else and I just didn’t answer the phone calls I kept getting. I wanted to stay in Leverett.

FM: What’s the most interesting thing you’ve seen from this desk?

BK: I’ve watched a lot of sweet moments sitting in this chair. A favorite one is when I watched Chief and Coach [the Leverett House Deans] share a kiss right over there (she points to the door). Oh another time, a girl came over to me and asked for some relationship advice. She told me she was seeing an older man, but didn’t think she had the time to devote to him, and he was falling in love with her. I told her that she should end it and wait, and she listened to me.

FM: How do you know if someone is in Lev or not in Lev?

Bonnie swipes the Leverett resident’s ID cards, and hands them back with a smile.

FM: What is your absolute favorite memory from your time here?

I get to the door and there’s a Harvard police officer and he says, “Are you Bonnie? Go right in.” Then I saw the Dean, and she said I had to go over and get an autograph. I didn’t think I had a shot at getting that.

When [Richie] was done with his speech, he went over to the other side of the room. I was like 20 people in back of him and I start belting out a song of his. He turned around, came up to me, put his arm around me, and joined in. Everyone got out of our way, we were taking all kinds of pictures. After, people enlarged the photos and put them behind my desk, calling me the next Mrs. Lionel Richie.

FM: Wow. That’s got to be your number one favorite memory.

BK: My number one is that I feel really happy when I’m here. I live alone and this is where I want to be until I retire.