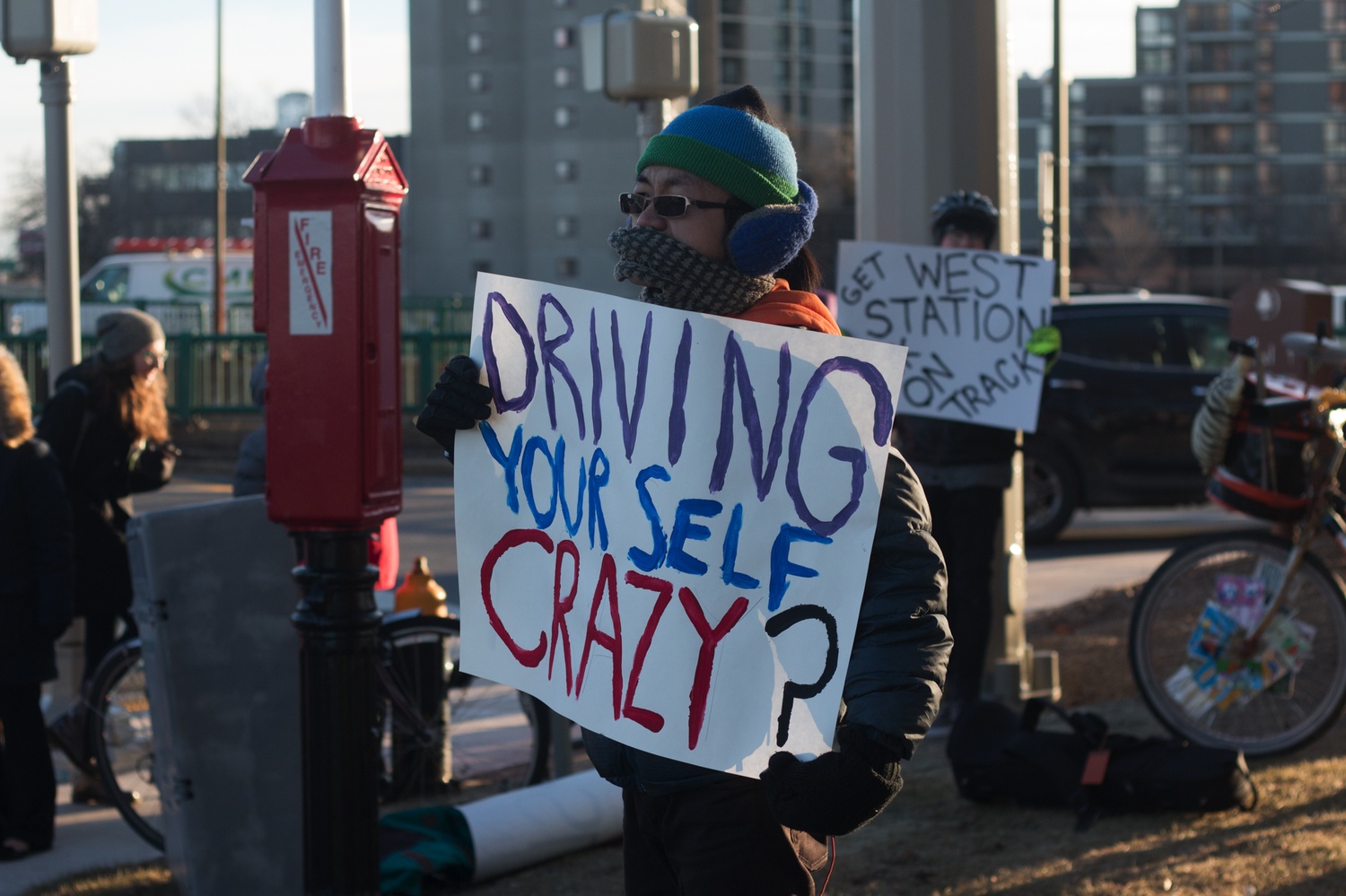 A protestor stands on Cambridge Street in Allston early Thursday morning as part of a rally about transit issues. By Caleb D. Schwartz
By Truelian Lee and Jacqueline P. Patel, Crimson Staff Writers

Standing by a congested intersection and braving the 21 degree weather, Allstonians held up colorful signs to protest anticipated traffic delays and transportation issues due to construction delays on West Station.

The rally, hosted by People’s Pike, protested the delay of the construction of West Station, a transit station slated to be constructed on Harvard-owned land in Allston, to 2040. Attendees held up signs like “Delaying West Station is Honkers” and “Get West Station Back on Track” during rush-hour traffic at the River Street Bridge intersection. On the “Rally for Transit, Not Traffic” event page on Facebook, the group encouraged attendees to march to the campaign headquarters of Governor Charlie D. Baker ’79.

People’s Pike is a group of Bay Staters who find issues with the Massachusetts Department of Transportation’s plans to improve the Mass. Turnpike.

The protests come just one day after Harvard pledged, in a letter to MassDOT Secretary Stephanie Pollack, to increase its funding for West Station to $50 million. Initially, Harvard intended to cover a third of construction costs, but, after Mass. politicians asked the University to fund “almost the entire cost” in a public letter, Harvard increased its pledge.

At a town meeting Monday, Allston residents also raised concerns about vehicle congestion in the decades between now and a completed West Station. Attendees of the rally shared similar worries.

“I feel like the way that the project is currently set up, it is going to primarily benefit people living outside of our neighborhood while lowering the quality of life in the neighborhood,” Allston resident Tony Arias said.

Residents pointed out the negative consequences of the heavy congestion currently commonplace in Allston.

In response to Harvard’s increased commitment to fund West Station, resident Steve Kaiser said, “This changes the whole game. It basically says to the state and BU, ‘Hey, you guys get off the dime.’”

Other residents said they hoped the University and MassDOT would conduct a transit study to better address traffic congestion.

Residents from surrounding towns also attended the rally in a show of solidarity.

“Traffic not only impacts this [Allston’s] side of the river, but our side of the river as well,” Cambridge resident Catherine Zusy said. “There’s congestion from this side of Memorial Drive between 3:00 a.m. to 6:30 a.m. every day. Down Western Avenue, you can barely move.”